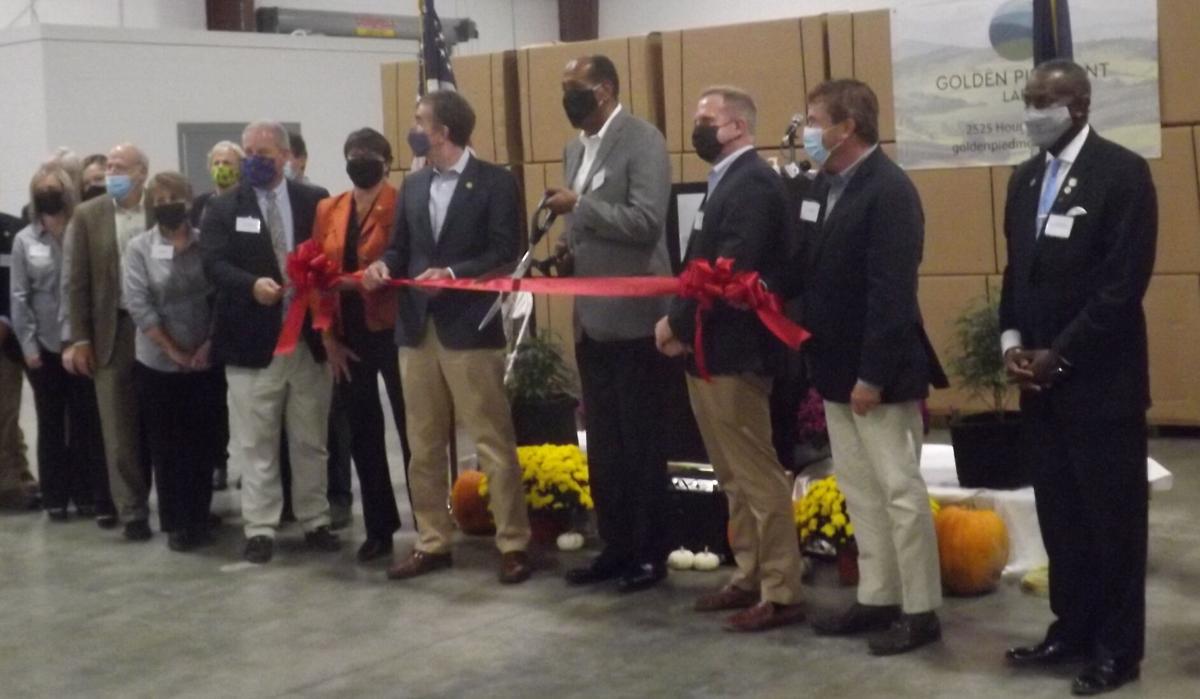 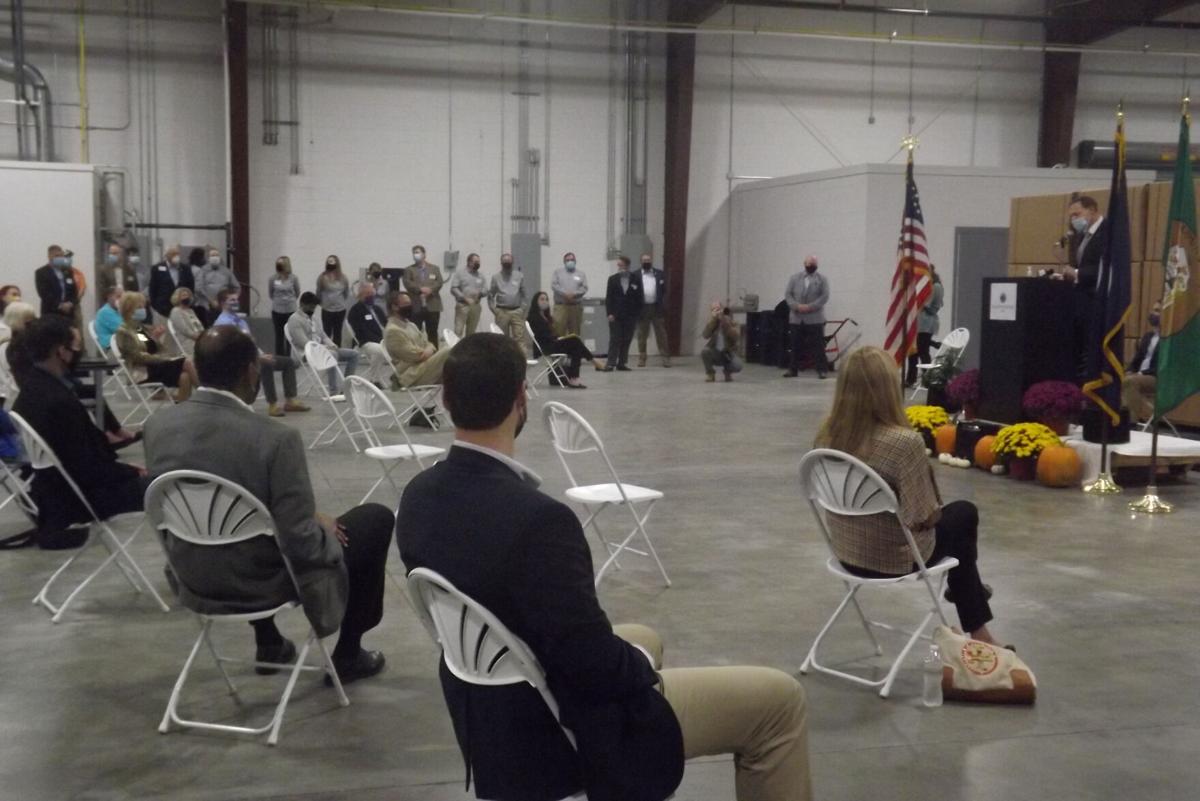 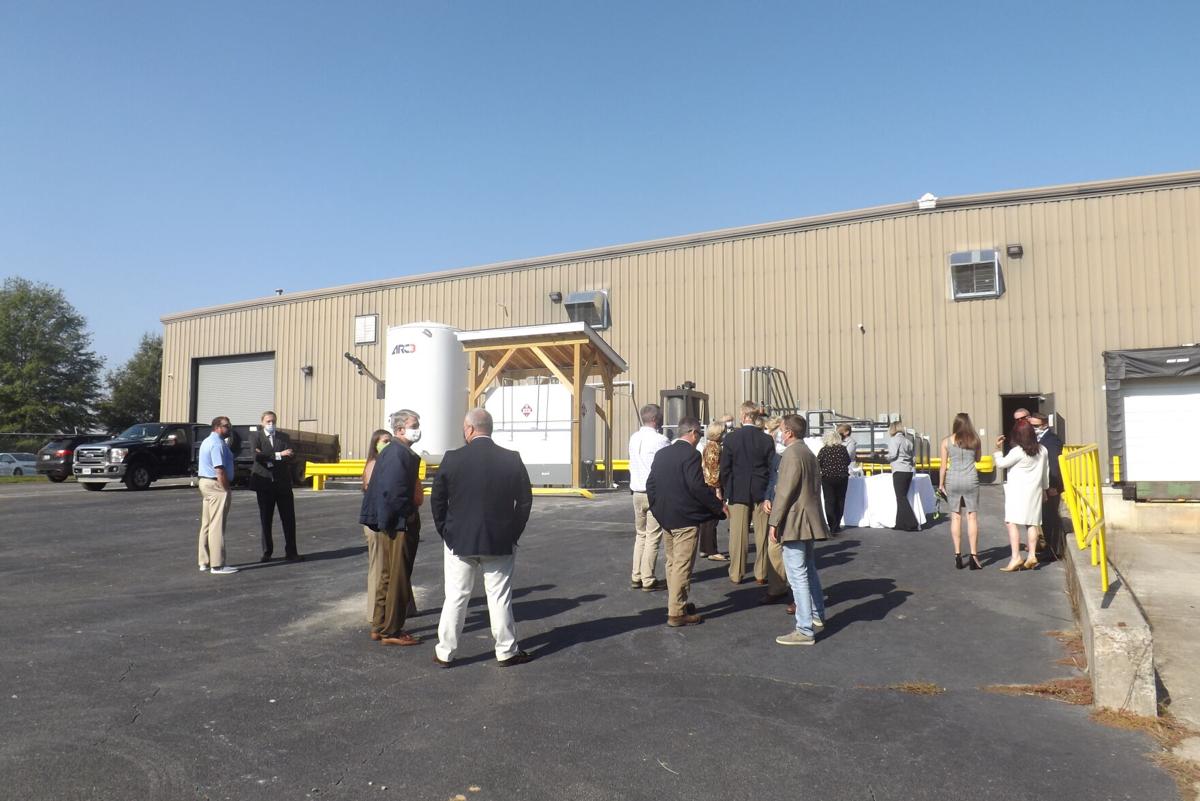 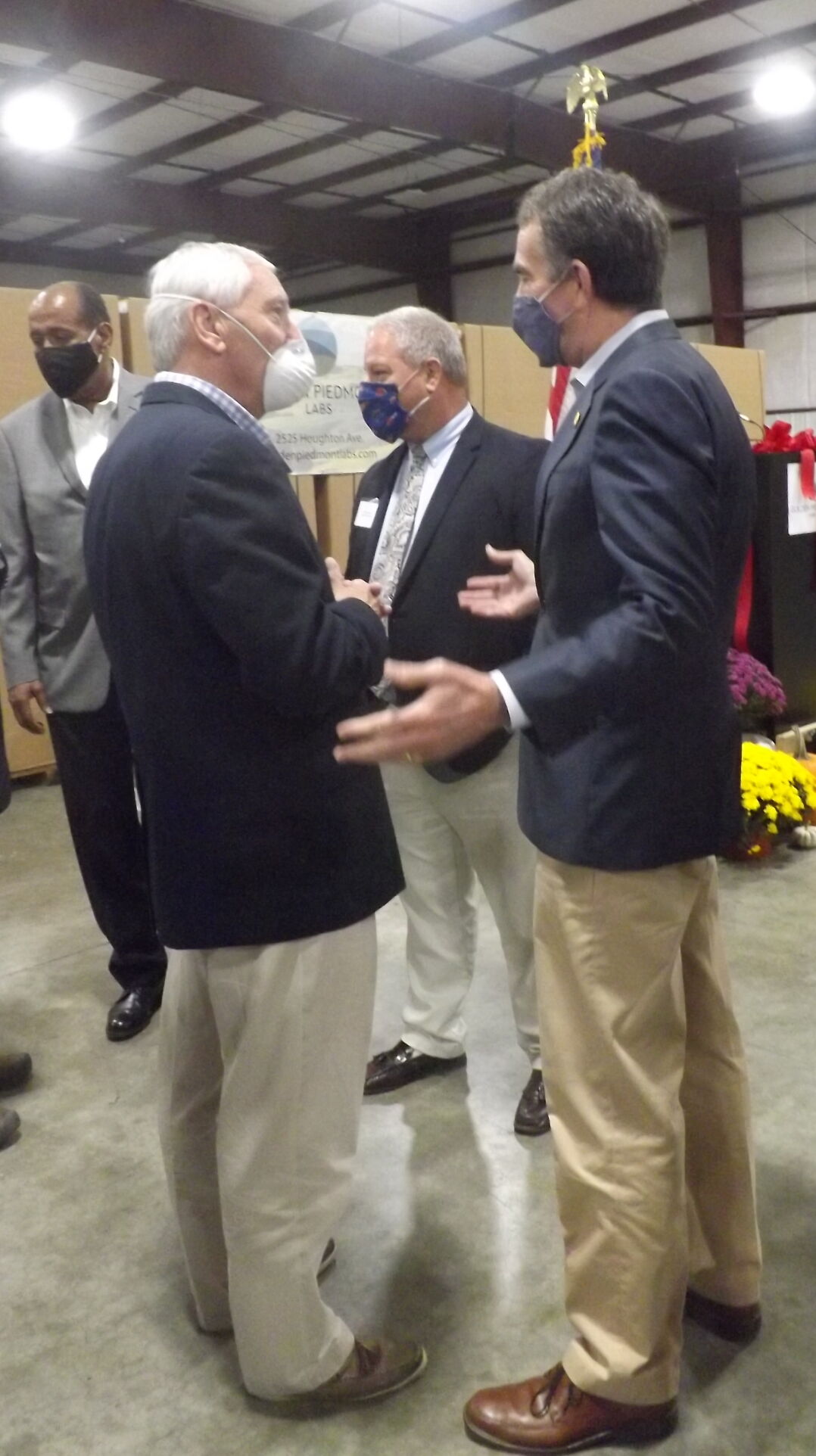 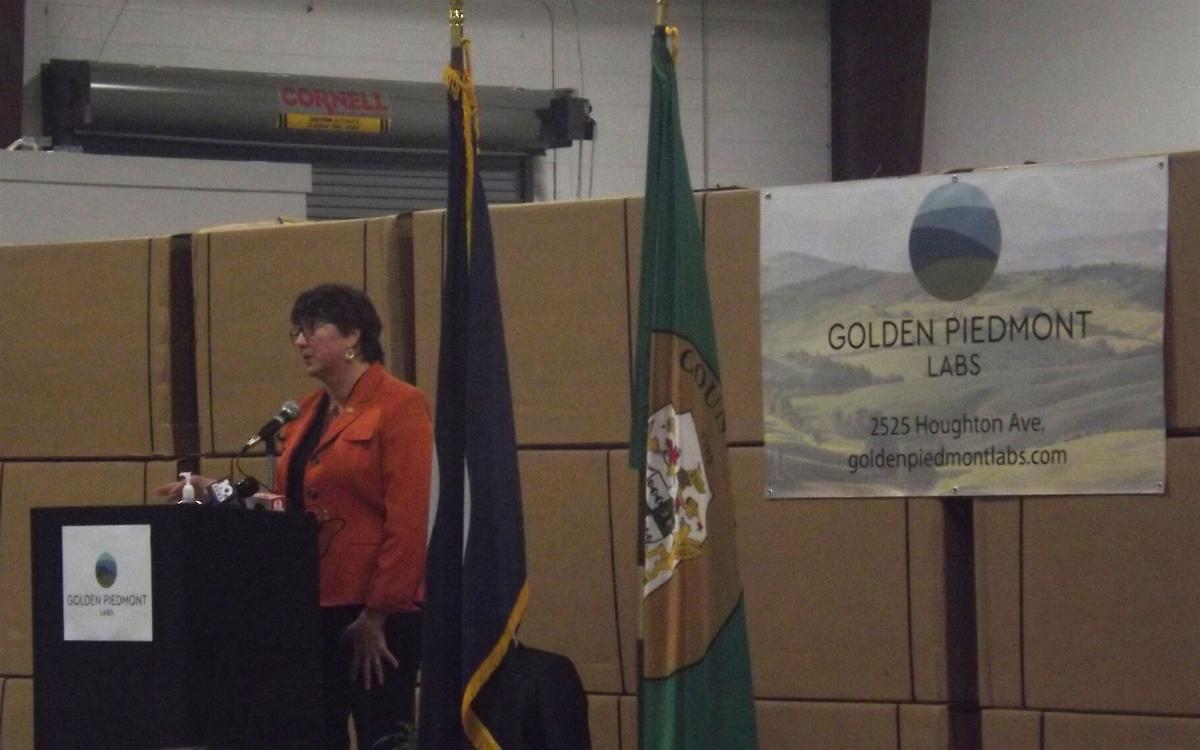 Bettina Ring, Virginia’s Secretary of Agriculture and Forestry, talks about the significance of Golden Piedmont Labs, an industrial hemp processing facility in South Boston, to the hemp industry in Virginia at the facility’s grand opening Thursday.

A large-scale hemp processing and cannabinoid (CBD) oil extraction facility, Golden Piedmont Labs, has begun production in Halifax County, playing a key role in Virginia’s No. 1 industry: agriculture. The processing plant is the first of its kind in Virginia.

“This is an exciting day for Halifax County and an exciting day for Virginia,” said Gov. Ralph Northam as he looked out on the crowd of investors, stakeholders, state, county and local leaders gathered at Golden Piedmont Labs’ grand opening and ribbon-cutting ceremony Thursday morning. The facility is housed in the former Blue Ridge Beverage Company building, at 2525 Houghton Ave. in South Boston.

“We are pleased to celebrate the opening of Golden Piedmont Labs and a new era of hemp production for Halifax County and the Southside region,” Brown said.

Golden Piedmont Labs president Steve Mize told the crowd he envisions the hemp industry as being “very profitable” in Southside Virginia and noted that hemp products have the power to change people’s everyday lives because of their medicinal qualities.

“CBD and other products are very life-changing for people,” Mize said. “In history, hemp is one of the most versatile products ever made.”

The hemp processing facility initially brings 22 new jobs to Halifax County, while also providing an essential market for hemp farmers in the region. In June, the Halifax IDA announced it had reached a performance agreement with the hemp processing company, formerly known as Blue Ribbon Extraction, to open the plant.

“Bringing Golden Piedmont Labs to Halifax County has been a team effort at the local, regional and state levels,” Northam told the crowd at Thursday’s grand opening. “This shows the confidence and optimism that this and other companies have in our state and our economy.

Bettina Ring, Virginia’s secretary of agriculture and forestry, told the crowd that Virginia’s largest industry is agriculture, and the hemp processing facility in Halifax County is “going to do so much to support our hemp industry across the state.”

South Boston Mayor Ed Owens cut the ribbon for Golden Piedmont Labs alongside Northam at the end of Thursday’s ceremony. The town’s leader expressed his enthusiasm for the new hemp processing facility.

“I think it’s wonderful for our community – a shot in the arm,” Owens said. “It’s good not only for the employment in the plant but also for the farmers in the surrounding areas. The economic impact is going to be wonderful.”

In a time of economic uncertainty, Halifax IDA board member Mattie Cowan said she is excited about the opening of the hemp processing facility and hopes Halifax County will have more business investments of its kind in the future.

“It’s wonderful to finally have something to really rejoice about, because we’ve had a lot of downturns,” Cowan said. “This helps farmers throughout our region; I think it’s going to be exceptional for the region.”

The hemp processing facility was the brainchild of Golden Piedmont Labs co-founder and Halifax County native Sterling Edmunds. He shared with the crowd at Thursday’s ceremony that he had attended a hemp conference in Powhatan about 15 months ago and thought, “We can do this in Halifax County.” Edmunds met up with fellow Halifax County native and childhood friend Rick Gregory, owner of Lynx Ventures in Richmond, who also had the idea to start a hemp processing facility. The two linked up and started working with the Halifax County Board of Supervisors and securing investors to make their vision a reality.

Edmunds and Gregory originally named their company “Blue Ribbon Extraction,” but changed the name in September to Golden Piedmont Labs as “a tribute to the farming heritage of rural Southside Virginia,” according to Edmunds. He said the goal is to make Southside Virginia to the hemp industry what Napa Valley, California is to the wine industry.

Edmunds shared that Golden Piedmont Labs’ ultimate goal for the future is to process 6 million pounds of hemp each year, making the facility “the largest producer of hemp east of the Mississippi.”

Mize said he envisions the hemp industry restoring Southside Virginia to the economic wealth and prosperity he remembers from his youth, growing up in Martinsville in the heyday of the tobacco industry. He added Golden Piedmont Labs has an outstanding team of people from Southside Virginia to make the hemp processing facility a success.

“I think the first thing that I want everybody to know is that there is a place here and there are employees here who can make the Southside vital and profitable again,” Mize said. “When I grew up in Martinsville, it was one of the wealthiest, most successful towns in the country. As you all know, we’ve lost the tobacco and furniture, and each one of our families were in different parts of that…so we are so excited to be a part of the solution (for Southside Virginia), which is why everybody is here.”

Mize noted that the hemp processing plant manager Patricia Walker also is from Halifax County and is highly qualified to oversee the facility, holding a master’s degree in engineering.