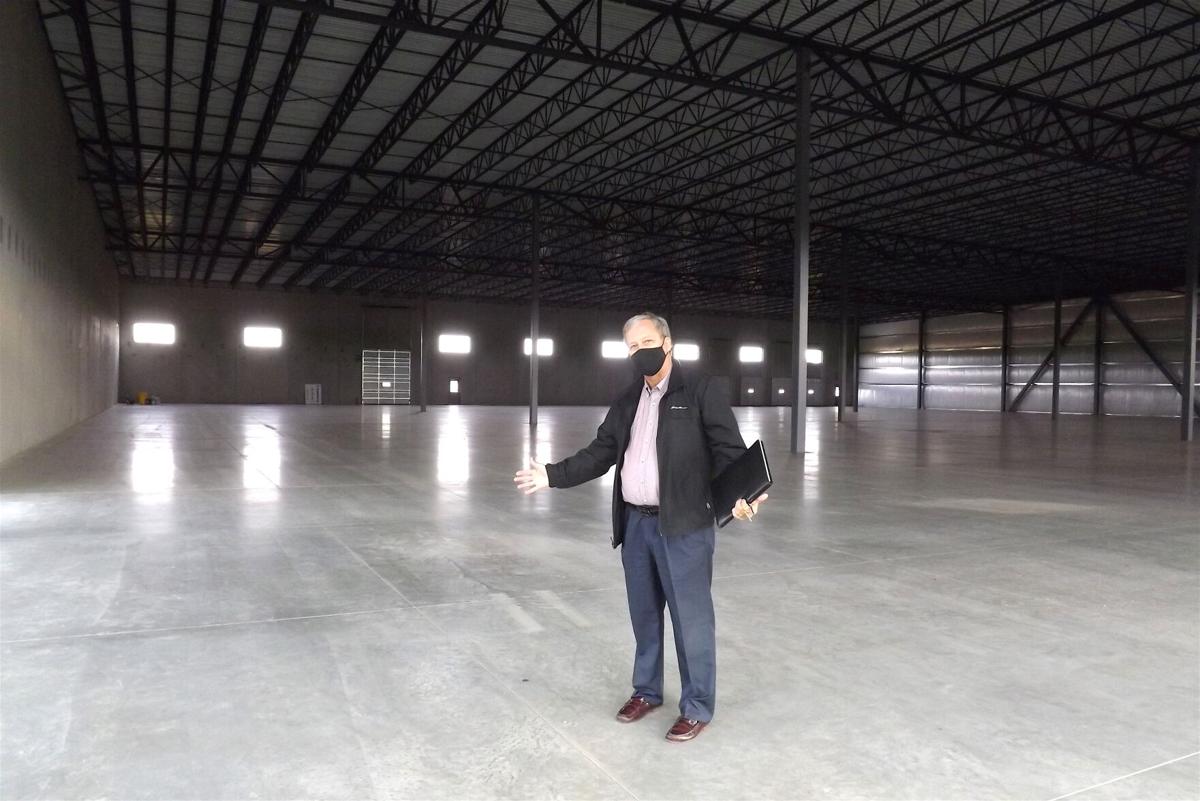 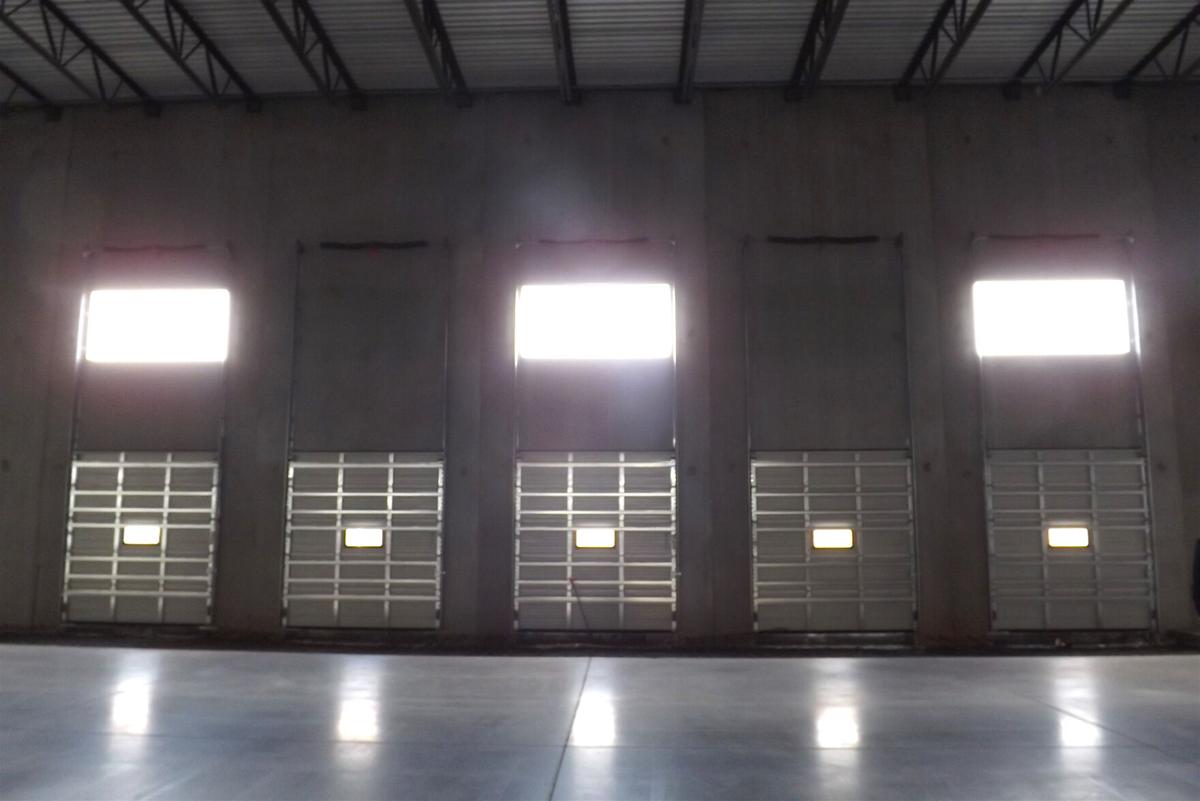 Five dock doors large enough for tractor-trailers to back into are a feature of the newly constructed shell building in Halifax County. The building was constructed for the ideal purpose of attracting a new advanced manufacturing company to the area. 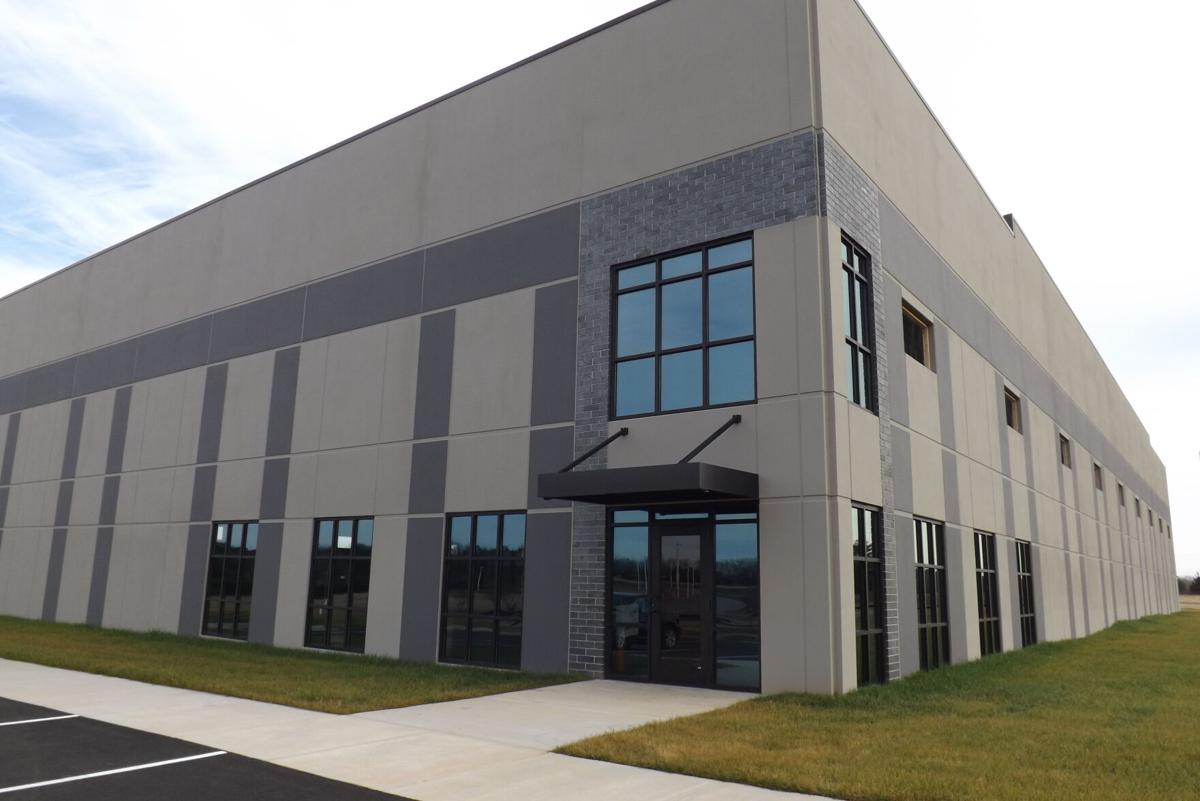 A shell building suited for advancing manufacturing now dots the landscape of the western entryway to South Boston. The building is located at 1030 Confroy Drive, just off Philpott Road, and is situated in close proximity to other industries. 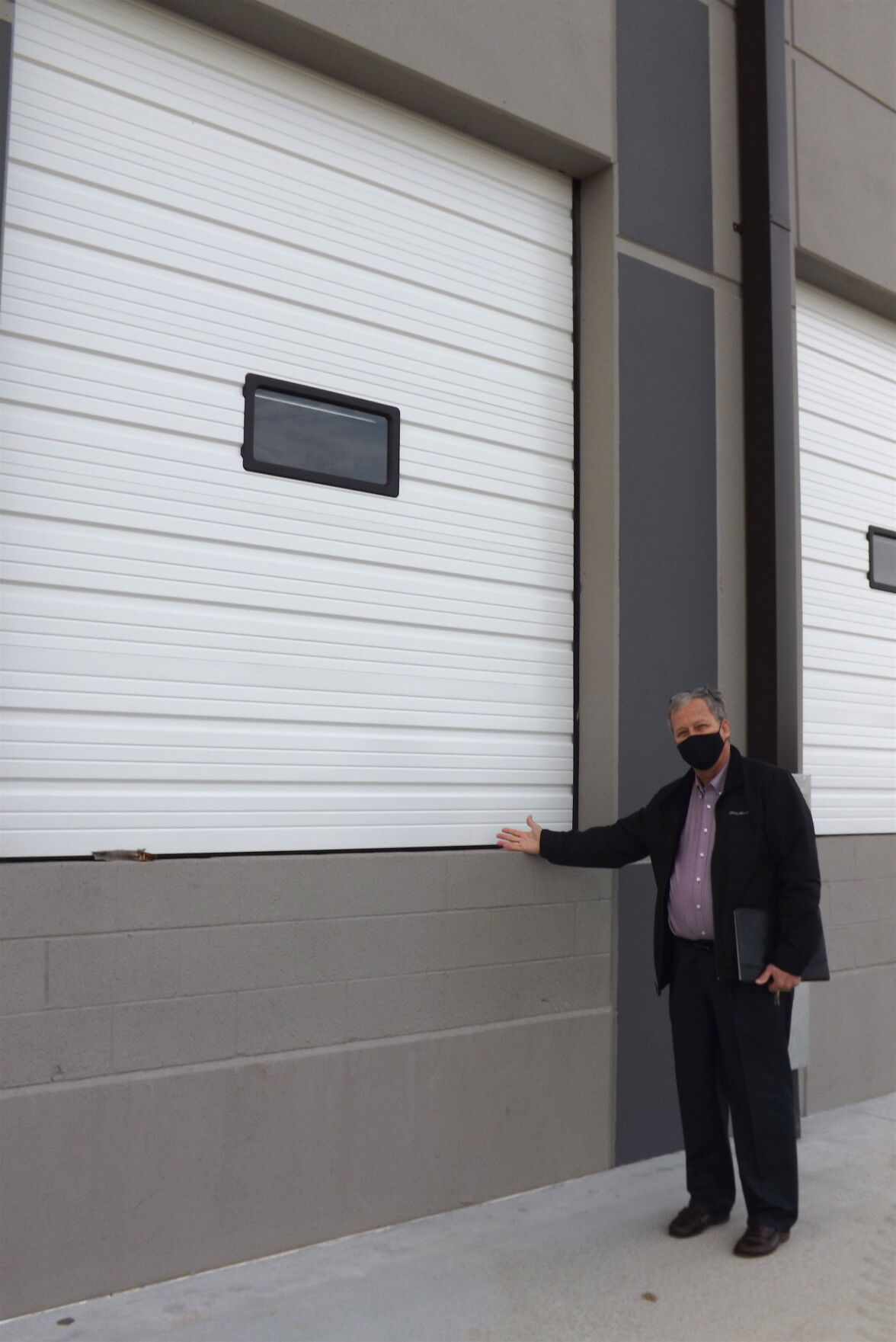 Mike Davidson, interim executive director of the Halifax County Industrial Development Authority, demonstrates the exterior of one of the dock doors on the shell building at the entrance of Southern Virginia Technology Park. The dock doors were designed to create a space for tractor-trailers to back up to the building and unload supplies. 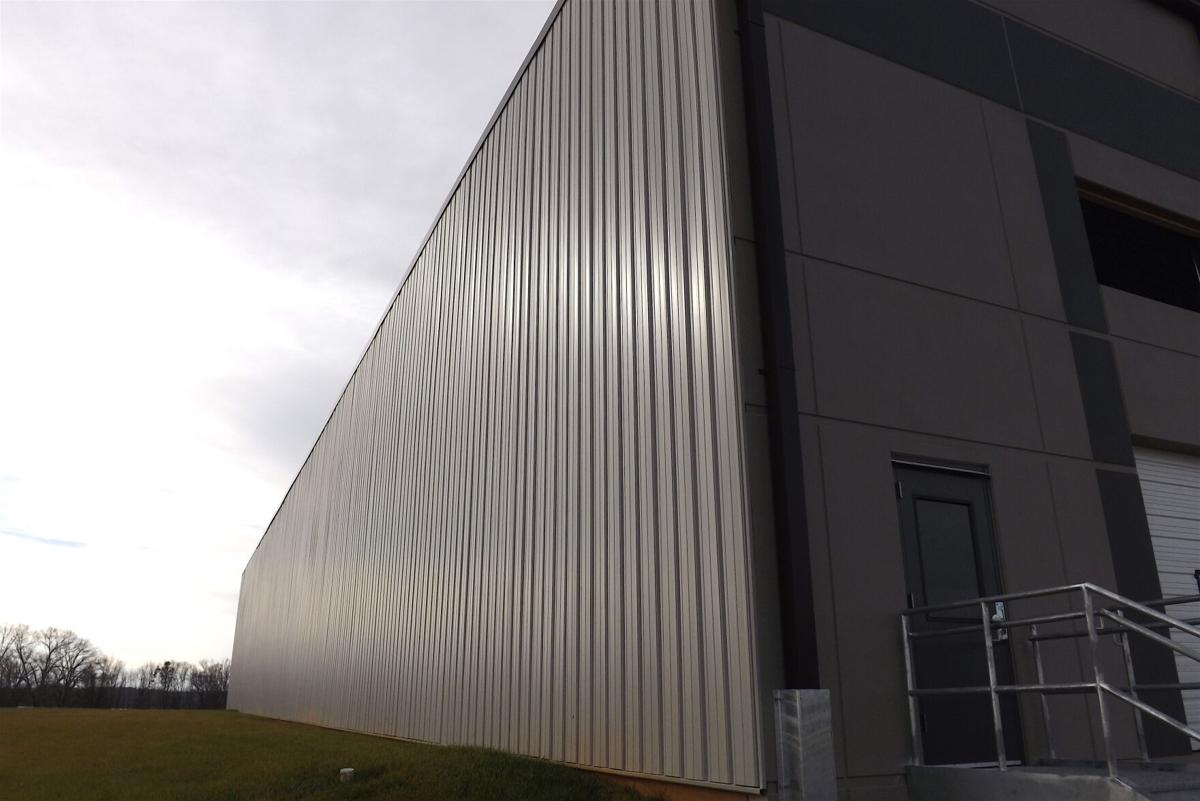 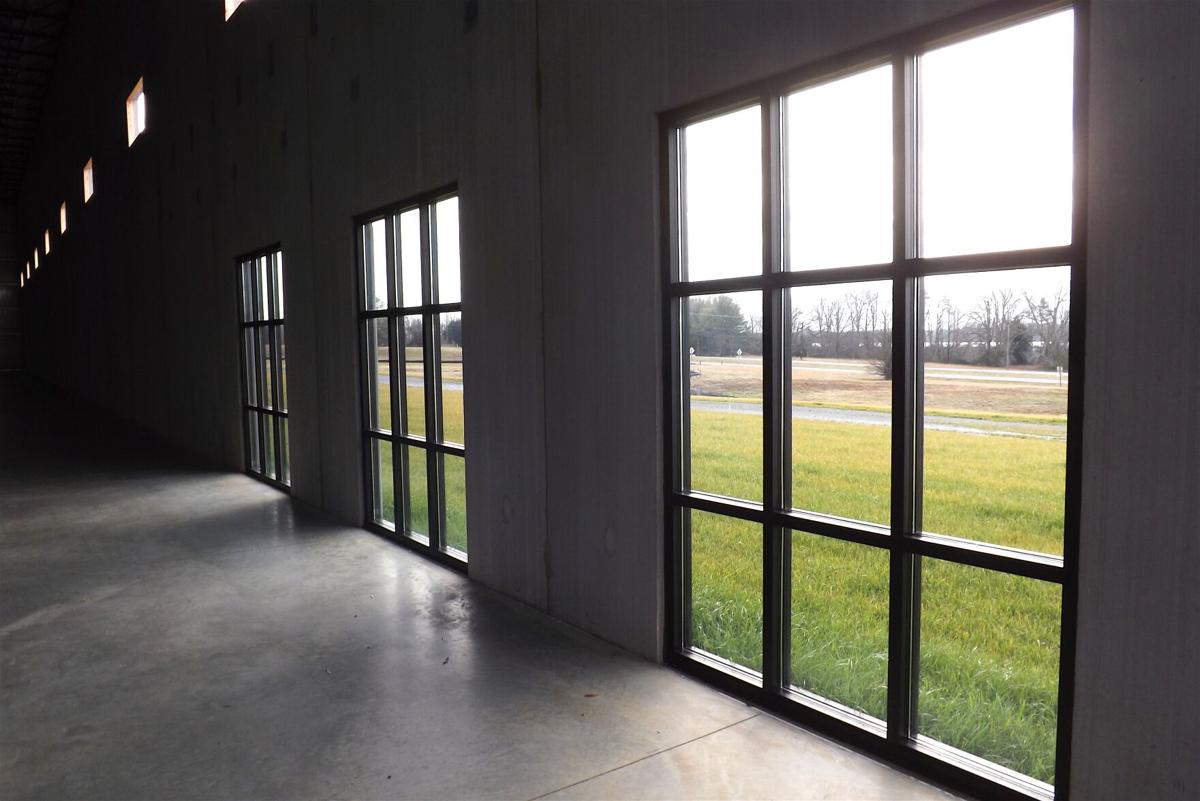 Large windows at the shell building constructed to attract a new advanced manufacturing company to Halifax County look out onto Philpott Road. That corridor of U.S. 58 is home to other industries.

Industries dot the landscape of the stretch of U.S. 58 known as Philpott Road, the entryway to the town of South Boston from the west.

The hope of the Halifax County Industrial Development Authority is that a new industry soon will be added to that landscape, making its home in the newly constructed “shell building” on a 14-acre site at the Southern Virginia Technology Park. The 50,000-square-foot building at 1030 Confroy Drive visible to motorists traveling down Philpott Road was built for the purpose of attracting new industry to Halifax County.

“This is, in my opinion, a premier shell building,” said J. Michael “Mike” Davidson, interim executive director for the Halifax County Industrial Development Authority, as he gestured at the tilt up concrete walls suited to advanced manufacturing while leading The Gazette on a tour of the building.

The price tag of the shell building was $3.6 million. In Davidson’s view, the investment is one that will pay off.

The building contractor, Greensboro, North Carolina-based Samet Corporation, broke ground on the construction project in March 2020 and completed work on the structure before the year’s end. Although Davidson was not involved in the IDA’s decision-making process in constructing the shell building, taking on the leadership role at the IDA in November 2020 as construction of the building was wrapping up, he very much looks forward to the outcome.

“The Industrial Development Authority was very progressive in making the decision to construct this building,” said Davidson, who is also the former economic development director for Campbell County. “You’ve got to have a building to be attractive if you want prospects to come and look at you.”

Davidson explained having a practically move-in ready building is essential in attracting new companies to an area because it saves the company the estimated year and a half process of applying for a building permit, waiting on the approval of the permit, the civil engineering process and finally the construction of the building.

The economic development expert added the shell building was designed to make Halifax County competitive in attracting new industry on a global scale. For instance, he said Halifax County is in competition with four different states in attracting the “most promising prospect” for the shell building, and the site is suited to meet the needs of the prospect because of the room for expansion of the building.

While construction of the building itself has been completed, any upfit of the inside of the structure will be tenant-driven, Davidson explained. That includes the completion of office space and restrooms inside the building, based on the company’s needs and number of employees, and the installation of HVAC (heating and air conditioning).

“We’re in a technology park, so the ability to have fiber access is here, as well,” Davidson said.

Davidson believes the shell building’s location also will make it attractive to prospects. He pointed out the Halifax County building is building is located near two major U.S. highways: Route 58 running east and west, and Route 501 running north and south, just 50 miles from I-85, and in the vicinity of other nearby industries.

The IDA leader said manufacturing companies often like to locate near each other, a strategy known as “clustering.” Having the other manufacturing industries located nearby helps reassure a prospective company eyeing the shell building that the area has the labor force the company will need for their manufacturing process, Davidson added.

A previous prospect for the shell building earlier this year came to a halt. At its May meeting, the IDA’s board of directors had approved a resolution on a lease agreement, economic development incentives and financing for a prospective tenant for the shell building, known by the codename “Project Select.” The Halifax County Board of Supervisors also approved a pair of resolutions of support for Project Select.

But the effort to bring the unknown company to Halifax County did not pan out. The IDA had agreed to increase the square footage of the shell building from 50,000 square feet to 150,000 square feet to meet the needs of the company. Brian Brown, then-executive director of the Halifax County IDA, said at the time, the cost of the building upfit “grew to a point that it was no longer economically feasible.”

Davidson said on Tuesday that while there is “no guarantee” that a company will move into the shell building immediately, the IDA currently has active prospects for the building including the company Halifax County is competing with four other states to bring to the area.