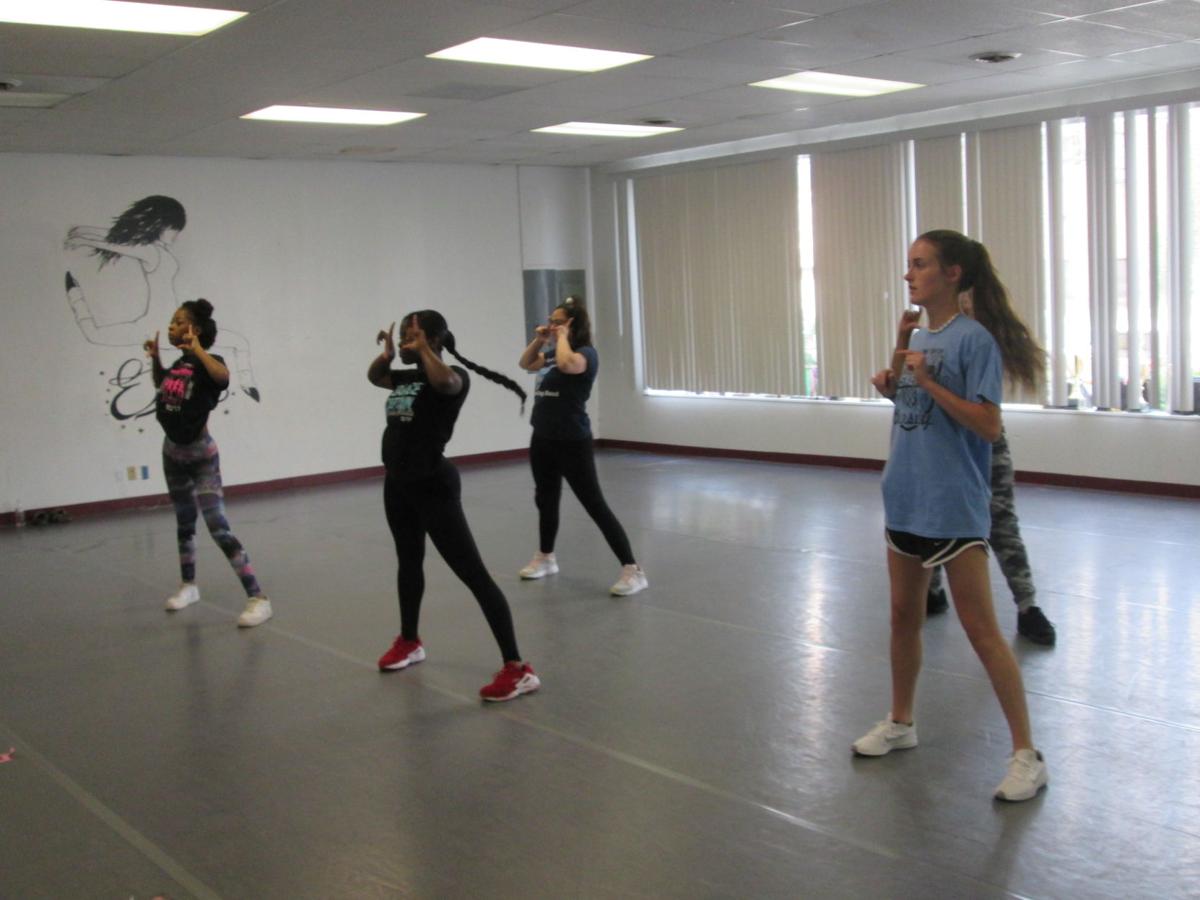 Destiny Thaxton, Kaitlyn Stephens and Marissa MacDonald (front, from left), and Shelby Poole and Taciana Rone (back, from left) dance in an advanced hip-hop class at Essence of Movement Dance Studio. The studio reopened Monday afternoon as part of Phase Two of Gov. Ralph Northam’s plan to reopen Virginia. 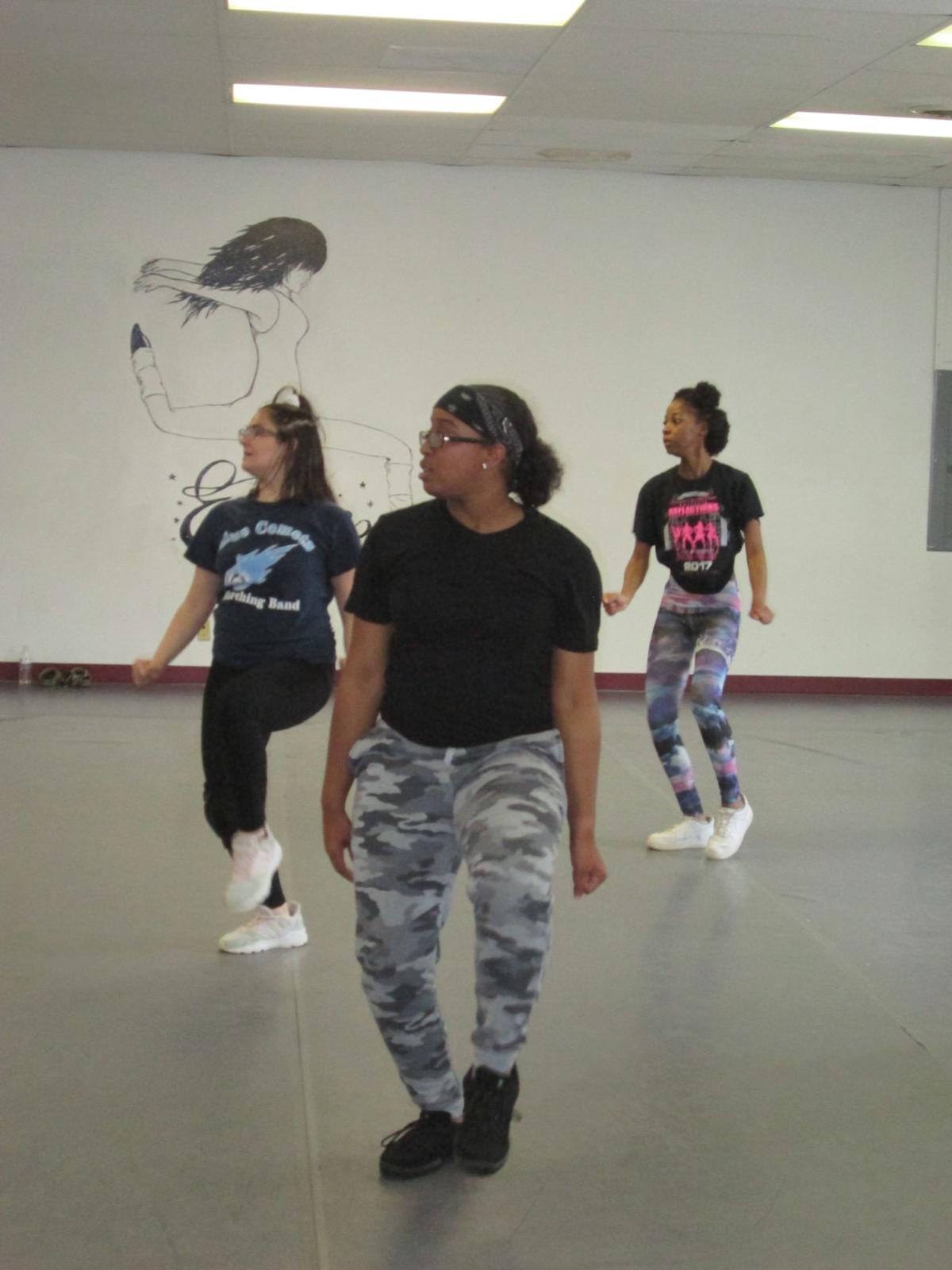 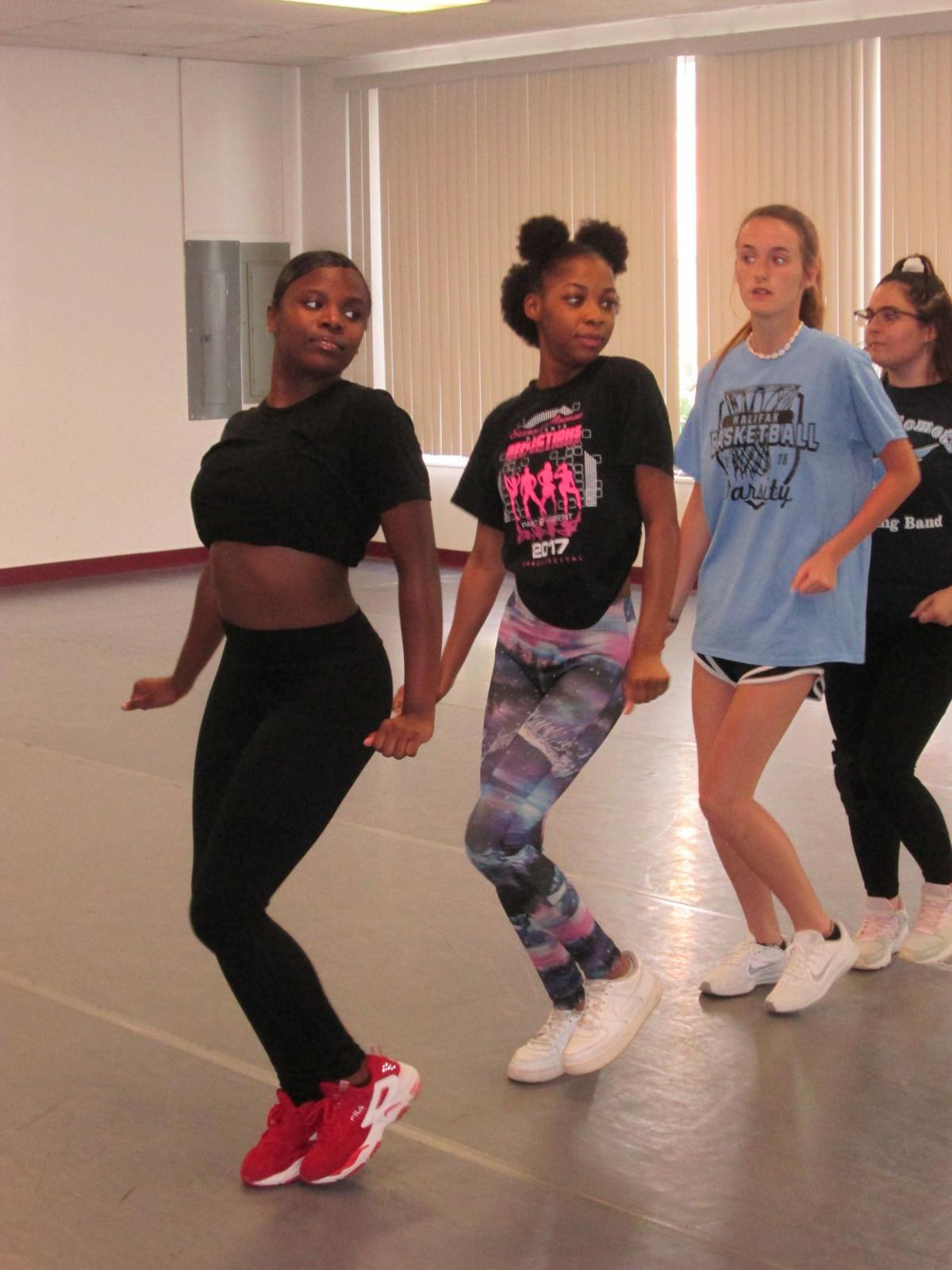 Kaitlyn Stephens, Destiny Thaxton, Marissa MacDonald and Shelby Poole dance in an advanced hip-hop class at Essence of Movement Dance Studio Monday afternoon. The students said they were glad to be back in the studio after a three-month hiatus.

Destiny Thaxton, Kaitlyn Stephens and Marissa MacDonald (front, from left), and Shelby Poole and Taciana Rone (back, from left) dance in an advanced hip-hop class at Essence of Movement Dance Studio. The studio reopened Monday afternoon as part of Phase Two of Gov. Ralph Northam’s plan to reopen Virginia.

Kaitlyn Stephens, Destiny Thaxton, Marissa MacDonald and Shelby Poole dance in an advanced hip-hop class at Essence of Movement Dance Studio Monday afternoon. The students said they were glad to be back in the studio after a three-month hiatus.

Stephens had dance classes in her studio Monday for the first time since March, as Virginia Gov. Ralph Northam on June 5 loosened restrictions as part of Phase Two of his plan to reopen Virginia during the coronavirus pandemic.

“We are so excited. It’s good to see their faces, it’s good to feel their energy,” Stephens said, of her dance students.

For now, Stephens is limiting each class to 10 people, including the instructor, and spreading students apart in her three studios. Instructor Deion Muse led a class in advanced hip-hop in one of the studios on Monday afternoon.

“Y’all dance like it feels good to be back on the floor,” Muse commented as his students enthusiastically danced to the beat of the music.

The students in Muse’s class confirmed that getting back in the dance studio felt nice.

“It felt amazing to be back in the studio. It felt nice to be back with family. This studio has become like my family,” said Shelby Poole. She said she enjoys the hip-hop class.

“It really will get your blood pumping.”

Stephens’ daughter, Kaitlyn Stephens, also was happy to be back in the studio, dancing to the beat of hip-hop music.

“It felt relieving to get up and do something. It’s really good to get active and get back into it,” Kaitlyn Stephens said. “It’s fun, it’s energetic.”

Essence of Movement Dance Studio usually has a May recital but was unable to hold a recital because of the coronavirus pandemic. But Stephens said the studio would still have a recital later in the year, even if it has to be held outdoors.

“We’re gearing towards an August show,” Stephens said. “We’re going to rock it out.”

Gyms are reopening with some restrictions in Phase Two, as well. The YMCA of South Boston/ Halifax County reopened its doors on Thursday.

“We’re really excited to get back open and see everybody’s smiling faces — smiling underneath their masks, anyway,” said Kristen Zerbato, executive director of the YMCA of South Boston Halifax County, ahead of the reopening. “This community needs to move a little bit…Exercise is a huge mood regulator, as well.”

While the Y is reopening, and is even offering classes, the fitness center is taking many precautions to ensure the safety of its members.

“We are opening at 30% capacity. People have to scan in and out. It helps us to better track how many people are in the building,” Zerbato said. “We are having to limit the number of people in each class to comply with social distancing. In the fitness center, people are limited to 90 minutes to work out to give everybody a chance to cycle through.”

The Y also is closing between 1:30 p.m. and 3:30 p.m. Monday through Friday to give the workout machines “dwell time” to allow viruses/germs to die out before the machines are used again, Zerbato explained.

The Y is reopening the pool on Monday but with restrictions in place.

Zerbato said the pool is open only for exercise, not for recreation.

The Y will have water aerobics classes three days per week, and those wishing to swim laps in the pool independently will have to reserve lane space prior to using the pool.

The fitness center had been offering karate classes outdoors, and owner Wayne Adams said he was grateful to be able to hold the karate class indoors for the first time on Monday, out of the heat.

Among the other classes Adams Total Fitness is offering are kickboxing, Zumba and TRX – resistance building – classes, with limitations on the number of people taking each class.

“I’m glad to be reopening,” Adams said. “We’re happy that the customers took care of us through it (the pandemic). We’re trying to get in new equipment that they like, giving out T-shirts, trying to make them happy.”

As a reopening special, Adams Total Fitness is offering its members a free 24-hour access card. Adams said the fitness center also is taking extra measures to keep the workout equipment clean, wiping down machines after every use and once an hour. He also said disinfectant wipes also are available inside the gym for customers to wipe down equipment before and after use.

Phase Two also loosens restrictions on restaurants, allowing them to open their dining rooms to customers at 50% capacity. Local restaurant owners say the support of their loyal customers and thinking outside the box have helped them survive the past three months.

“I’m just so grateful for the support of the community during this time. They truly blessed me to keep me open and keep the bills paid,” said Ginger Hamlett, owner of The Packhouse in Halifax.

Hamlett reopened the dining room of The Packhouse to customers Monday morning. The restaurant’s special this week is a customer favorite — a steak and cheese sub, with a drink.

Hamlett said it feels good to have her restaurant open again. At the same time, she said she is doing everything she can to keep her customers safe by sanitizing every surface that a customer touches and wearing a facemask.

The restaurant owner said The Packhouse stayed in business during the pandemic by offering takeout, delivery and curbside service to customers. She had an additional venue as well – the outdoor farmers market in Halifax.

“I’ve been setting up at the farmers market in Halifax on Saturdays, and they’ve been supporting me there as well,” Hamlett said.

“Business is going as well as expected, given the circumstances,” said David Walters, general manager and part owner of Badeaux’s. “We’re following all of the guidelines from the governor’s office to a T as best as we possibly can.”

Walters shared the creative strategies that Badeaux’s used to stay in business during the pandemic – offering curbside takeout, room service to the adjacent hotel, the Quality Inn, and patio seating for customers who wanted the experience of dining out.

Now, customers have the option of dining in the restaurant or dining on the patio.

Walters said he looks forward to the next phase of reopening, when he will be able to provide more offerings to his customers, such as live music.

“We’ll get back to doing live entertainment as more restrictions are lifted,” Walters said.

In Northam’s Phase Three of reopening Virginia, which is not projected to begin until at least two to four weeks after the start of Phase Two, capacity limits on business establishments are expected to be lifted.