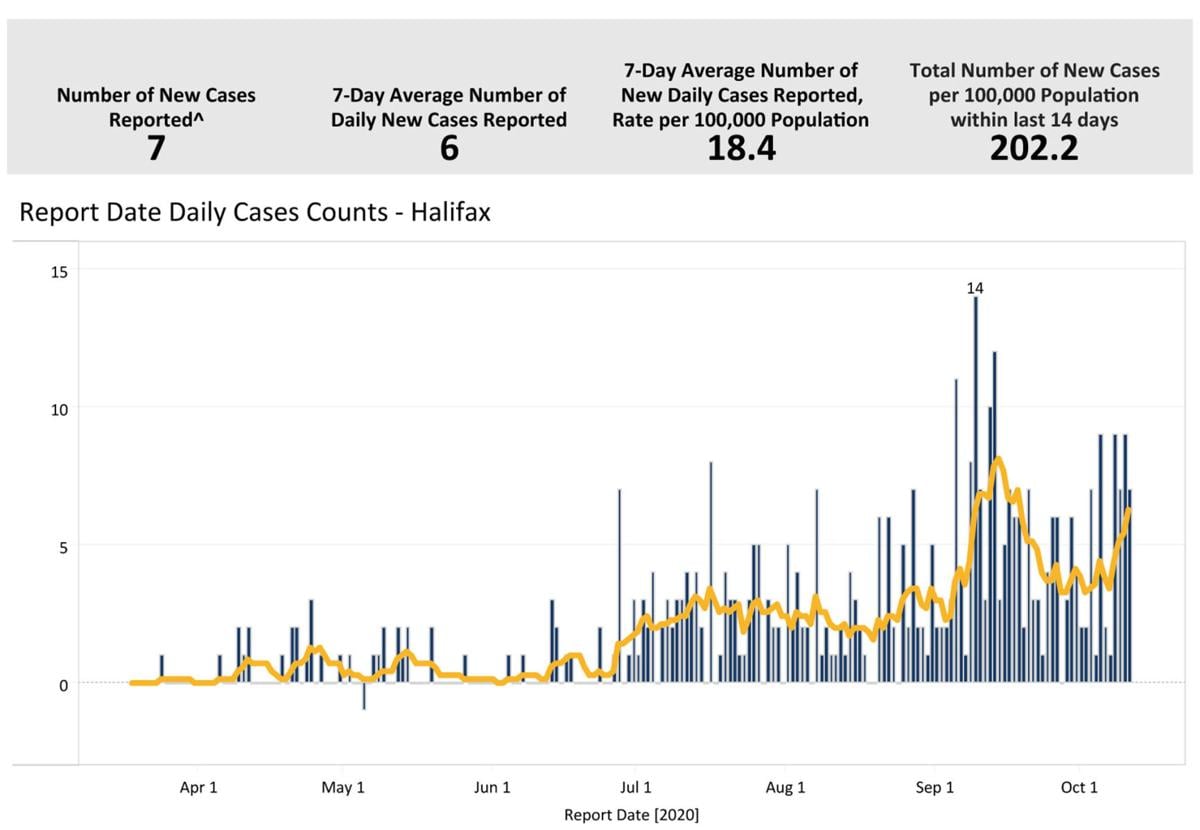 The daily case count for Halifax County has nudged upward over the last week, a trend the University of Virginia’s COVID-19 model notes as slow growth.

A slow growth in COVID-19 infections is driving up the daily caseload for Halifax County, health data reveals.

The county surpassed 400 cases on Friday and stood at 417 on Sunday. The slow growth, as determined by the University of Virginia’s COVID-19 Tracker, means cases are on the rise, but not at a level that would be considered a surge.

The Southside Health District — an area that includes Halifax, Mecklenburg and Brunswick counties — shifted back into the slow growth designation in the most recent update by UVa released Friday.

In the last week, Halifax County added 44 new cases of the illness caused by the coronavirus. Those new cases are driving up the seven-day average caseload for the county.

Still, even with the recent uptick, Halifax County maintains the lowest caseload of any Southern Virginia locality. Danville and Pittsylvania County have both eclipsed the 1,000-mark, as has Henry County.

As of Sunday, Mecklenburg had about doubled the cases at 833.

Halifax also ranks low on the death toll with seven fatalities. Combined, Pittsylvania County and Danville have recorded 48 deaths from COVID-19. Mecklenburg added another death last week for a total of 34.

The UVa model provides a weekly snapshot of current conditions across Virginia and attempts to project future trends.

Researchers strongly caution the model is only designed to show what could happen and isn’t a true forecast.

For the first time since the model began, no district in Virginia is in a surge trajectory for cases. The latest projection suggests a downward trend in cases in the coming weeks across the state.

“However, even a slight change in behavior could alter the course of the pandemic as season changes occur and Virginians spend more time indoors,” the report warns.

The Virginia Department of Health only provides demographic data based on health districts and not individual localities.

In the Southside Health District — with a total caseload of 1,642 — the 30-39 age group is experiencing slightly more cases than other groups, but overall it’s equally divided for residents ages 20 to 69.

At 855, slightly more men have been infected compared to 778 women.

The percent positive rate, a key measure health officials use to determine if the virus is spreading in an area, has ticked up recently to 6.1% for Southside. That’s still far lower than 14% at the beginning of September. The rate dropped to 2.8% in late September.

When someone does test positive, the case is assigned to that person’s official place of residence. The health department uses what’s known as PCR tests, often referred to as the gold standard in COVID-19 testing, to determine cases.

Even if a person tests positive multiple times, it’s only recorded as a case once, according to the health department website.

The Virginia Department of Health does not track recoveries.

The Centers for Disease Control and Prevention reports an overall increase in daily cases across the nation with more than 50,000 cases added daily Wednesday-Saturday.

The Institute for Health Metrics and Evaluation — a global health research center at the University of Washington — is projecting daily deaths to reach about 2,250 by mid-January. Currently, deaths have been declining to about 680 per day. By February, the institute foresees a total of 395,000 deaths from COVID-19.

“The fall/winter surge timing in each state will depend on actions by individuals and the speed of reaction to the surge by different governors or other local government officials,” researchers wrote in a briefing for the model update on Friday.

This model suggests an increase in cases by December and January.