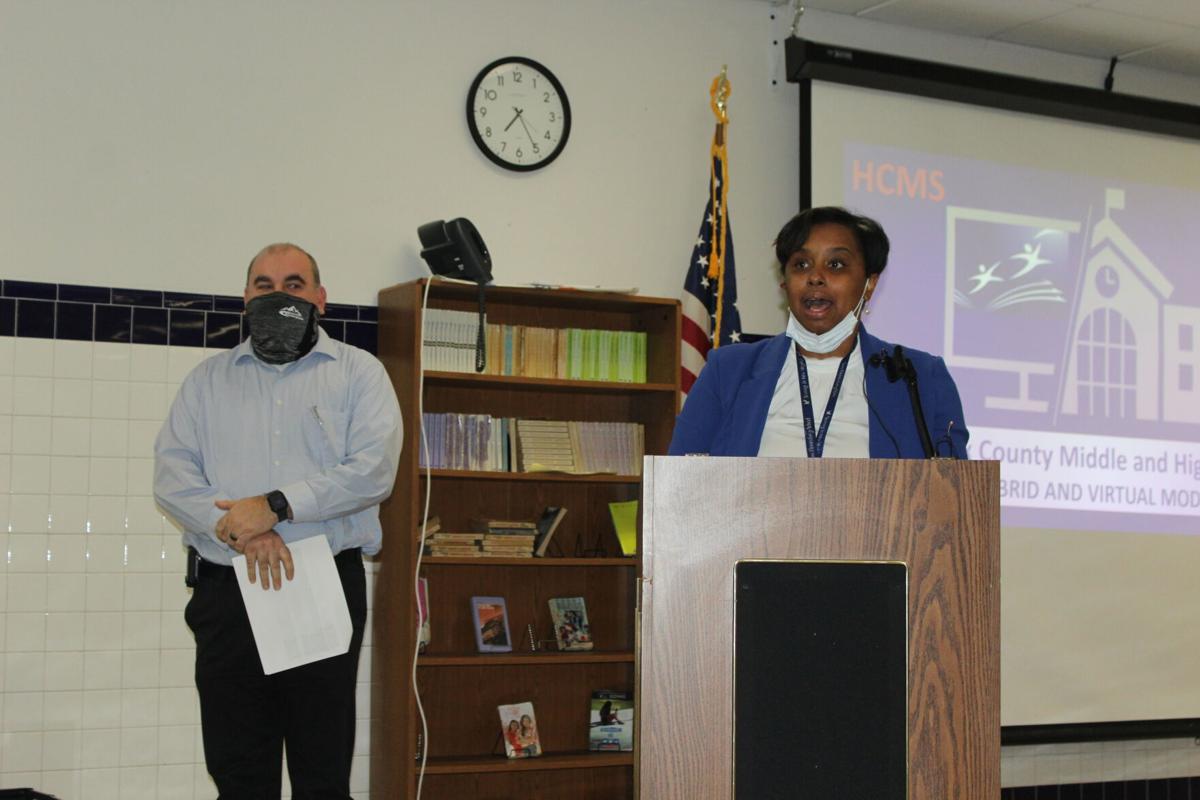 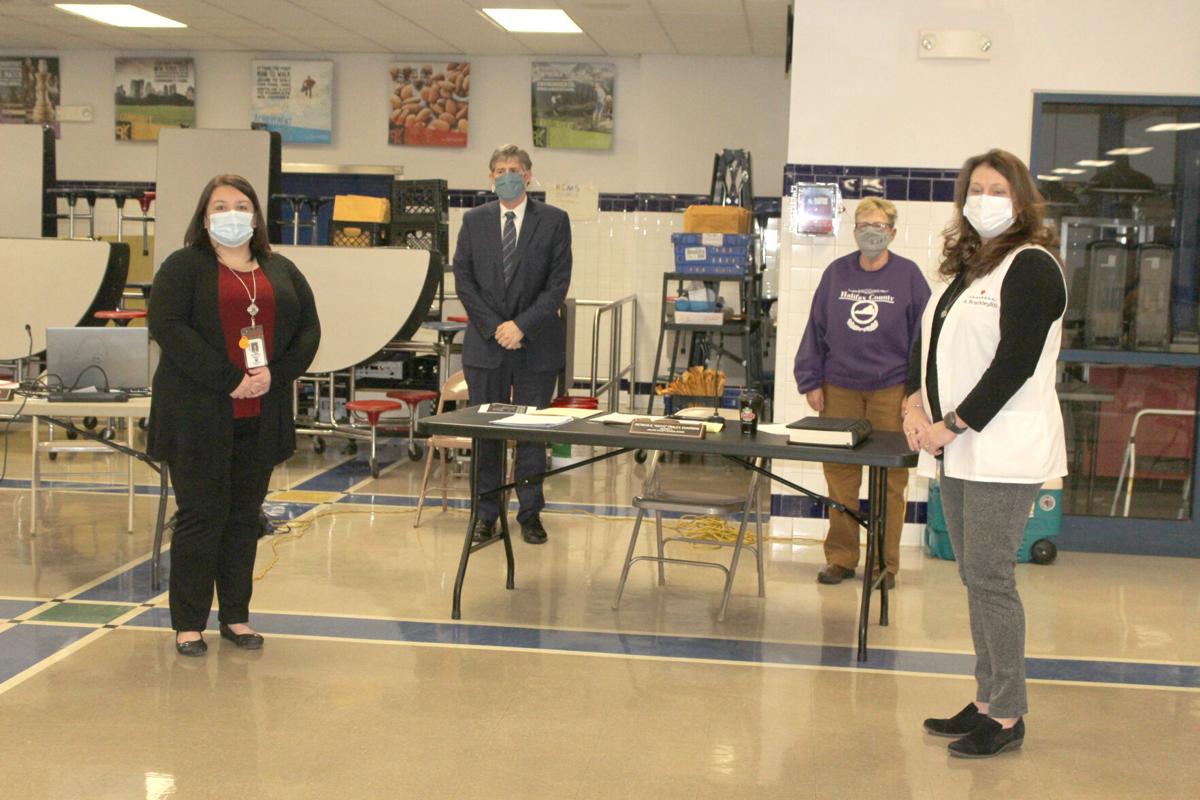 Superintendent Dr. Mark Lineburg and Halifax County School Board chair Kathy Fraley (in the back, from left) thank head nurse Tina Slabach (front left) and the rest of the nursing staff for all that they’ve done during the COVID-19 pandemic.

Superintendent Dr. Mark Lineburg and Halifax County School Board chair Kathy Fraley (in the back, from left) thank head nurse Tina Slabach (front left) and the rest of the nursing staff for all that they’ve done during the COVID-19 pandemic.

Halifax County School Board members approved giving students in those grades the option to return to a hybrid in-person model on March 8 giving the school system three weeks to see how the initial return goes.

Parents will have a choice between a distance-learning model, that they’re currently using, or a hybrid in-person model with students attending school two days a week either on A day or B day until 1:30 p.m.

The date of when the remaining grades return remains up in the air with some board members feeling like seniors, who were initially set to return on April 12 along with the other remaining grades, should be more of a priority.

“I’ve had a lot of parents wanting to know why eleventh and twelfth grade students are not prioritized. They don’t have the same amount of time (as other students). There is a strong feeling that they need to be there,” said ED-2 trustee Roy Keith Lloyd, who noted he had received three messages about seniors since the start of the meeting.

Superintendent Dr. Mark Lineburg said their return-to-school plan follows the guidelines given to them by the Virginia Department of Education which suggests starting with students who need the in-person instruction the most, special education, English language learners and those in pre-K through third, and then moving to transitional grades.

“It’s not meant at all to be a slight to seniors,” said Lineburg.

ED-8 trustee Walter Potts agreed with Lloyd saying that seniors need to be sooner on the list to return.

“These kids are missing out,” said Potts.

However, ED-3 trustee Sandra Garner-Coleman noted that many seniors had already applied and been accepted into colleges.

She said they may be missing out on the social component of being in school, but she said, “I don’t think we’re doing them an injustice.”

Lineburg suggested they could bring back the rest of the high school students by March 22 or March 29.

But, the ED-3 trustee said those “theories were wonderful,” but that all their decisions were going to be driven by COVID-19 and how the initial return to in-person instruction goes.

“We’ve wasted an hour talking about grades, and we need to stick to the original plan,” said Coleman.

In the end, Lineburg agreed that he and his staff could review the return-to-school plan, and they could talk further at their March 8 meeting to see what dates to bring back the rest of the students.

Director of elementary education Lisa Long also gave an update on the return-to-school plan for pre-k through third grade students.

She said they began notifying parents on Jan. 19 about which days their child will be coming into the building with siblings attending on the same two days.

Those attending on A day will attend face-to-face instruction on Mondays and Wednesdays and Zoom from home Tuesdays and Thursdays, with B day the opposite.

Long also noted that during the first week, teachers will focus on going over safety guidelines and procedures and social and emotional learning.

When students are in school, she said they would be with teachers and support staff for whole group instruction and/or small groups for remediation.

Classrooms are going to be socially distanced, and students and staff will be required to wear a mask in the school buildings and on the bus.

The afternoon hours of 1:30 p.m. to 3:30 p.m. Monday through Thursday and all day Friday will be used for office hours, said Long.

The director of elementary instruction also said meals will be brought to the classroom, and mid-day meal delivery will be ending with pick-up being the sole option for remote learners.

Numbers of how many students will be in a classroom on any given day also was reviewed.

The superintendent said so far approximately 28%, or 886, of pre-k through third grade students are set to return to their elementary schools Tuesday.

So far, the classroom size will range anywhere from two students to 37 students, with the larger amount of students in a classroom at the two larger elementary schools, Cluster Springs Elementary and South Boston Elementary.

The superintendent also said so far 23%, or 622, students in grades fourth, fifth, sixth and ninth have expressed interest in returning to in-person instruction on March 8.

She said they would take four core classes on both days and one related arts on any given day.

Lewis said of the 292 students who have completed their survey so far, a total of 140 would like to return to in-person instruction.

He also said students would attend four blocks, which he said have been shortened to 60 to 65 minutes.

The high school principal also said meals will be grab and go and eaten in the classroom with take home meals also provided.

He also noted that all staff and students will have their temperature checked upon entering the building and asked a series of health questions, and masks will be worn by all at all times unless eating or exercising.

Each school building will have an isolation room, the principal noted before saying cleaning will be a top priority and that teachers will clean in between student groups.

Lewis also noted that hand sanitation stations are in place as well as touch free fountains to fill up water bottles.

Internet cafes also are set to begin Tuesday from 4:30 p.m. to 7:30 p.m. to provide help with assignments and technical support in a safe environment, said Dawn.

The cafés also will be available on Thursdays during that same time, and on Saturday from 9 a.m. to noon.

Students will sign up for 45-minute time slots to allow for proper cleaning between appointments.

Board members also heard a health update from head nurse Tina Slabach who said the county’s positivity rate was at 12% on Monday, down from 20.9% in January.

Slabach said 325 more employees have expressed interest in getting the shot.

Potts said they needed to encourage employees to get vaccinated, and he said he would even like to see the students get vaccinated, but Slabach said the vaccine is not approved to give to children.

Lineburg also noted that getting the vaccine was a personal health choice, and they would still be required to wear a mask and follow other safety protocols regardless if they get the vaccine.

Balance, choice and safety are the three main priorities the superintendent said he is following.

Parents, he said, will have a choice for the rest of the year, and hopefully, he said, all students will have the option for the hybrid model by April.