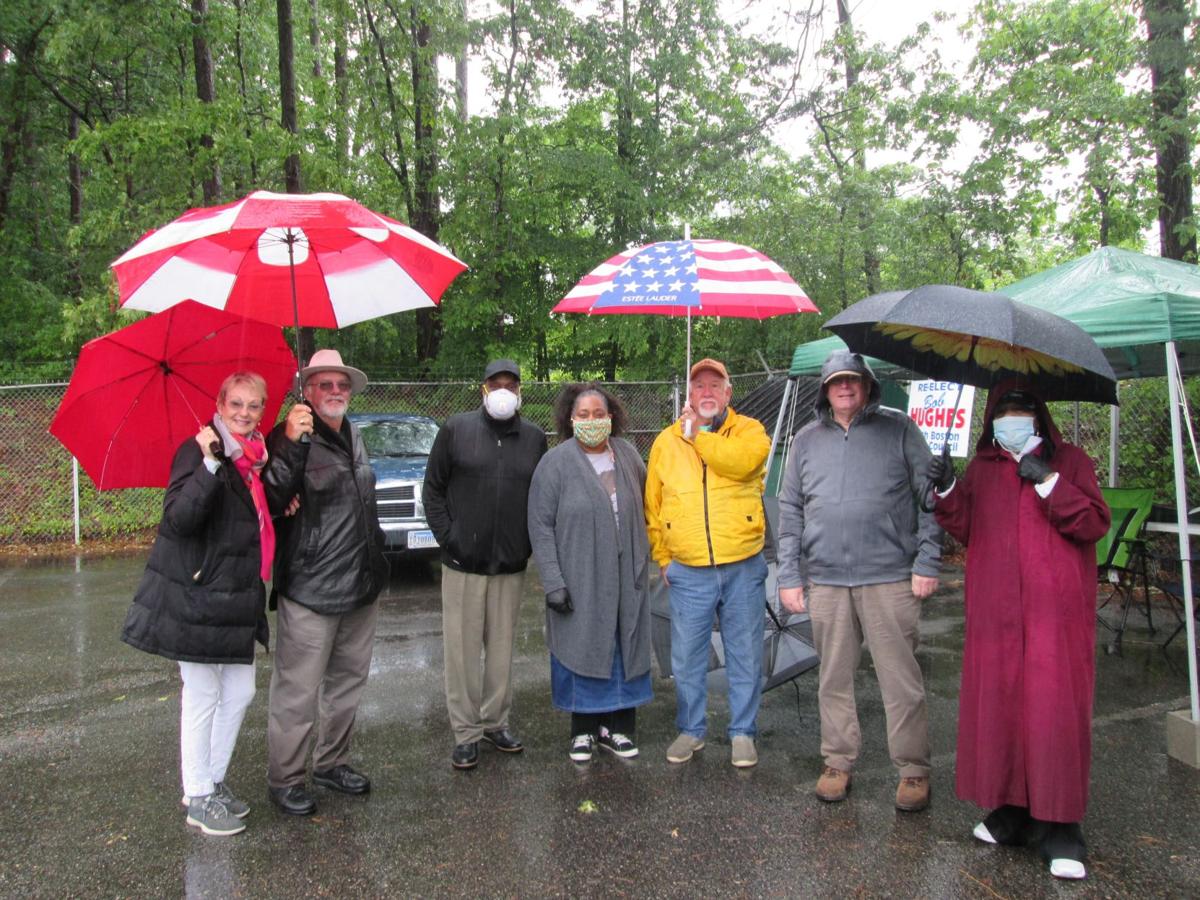 South Boston Town Council candidates and supporters don their rain gear and camp out at in the parking lot of the South Boston Recreation Center for Tuesday’s election including (from left) to right are Jayne Elliott (not running for council), her husband Tommy Elliott, Michael “Mike” Byrd, vice-mayor Tina Wyatt-Younger, Robert “Bob” Hughes, Joseph “Joe” Chandler and Harriett Claiborne. 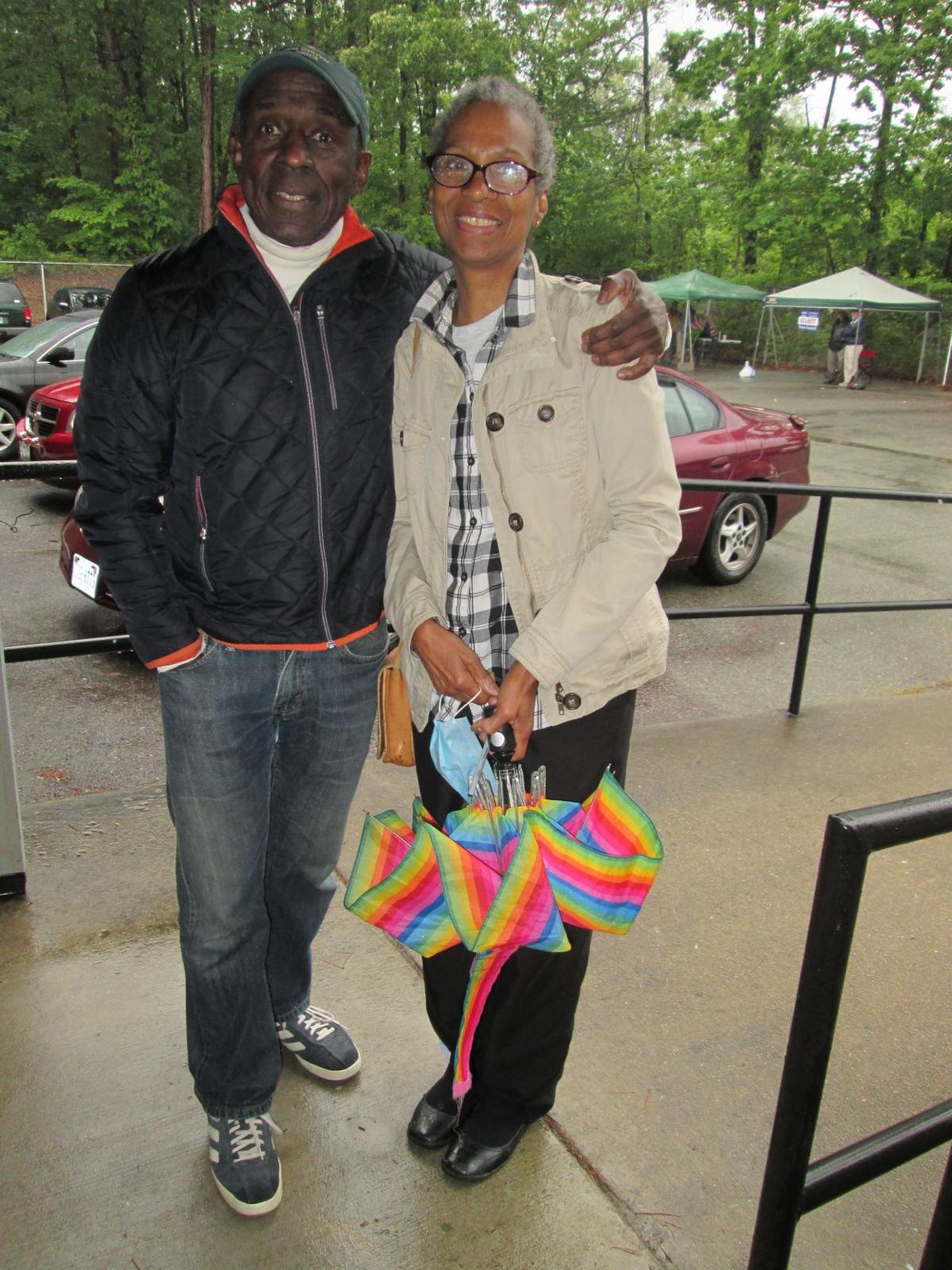 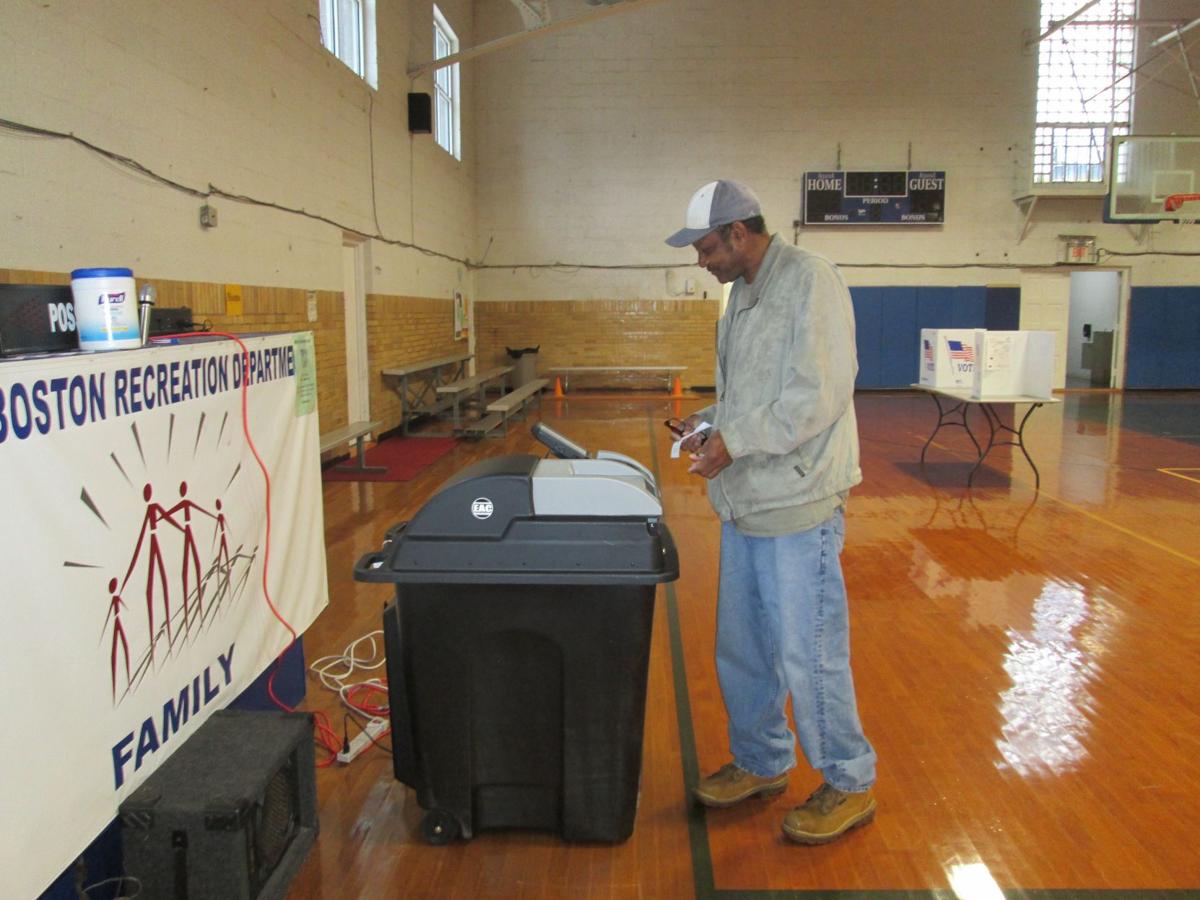 Jerry Ragsdale casts his ballot in Tuesday’s South Boston Town Council election. He came out to vote for Mayor Edward “Ed” Owens, who was running unopposed for another term as mayor. 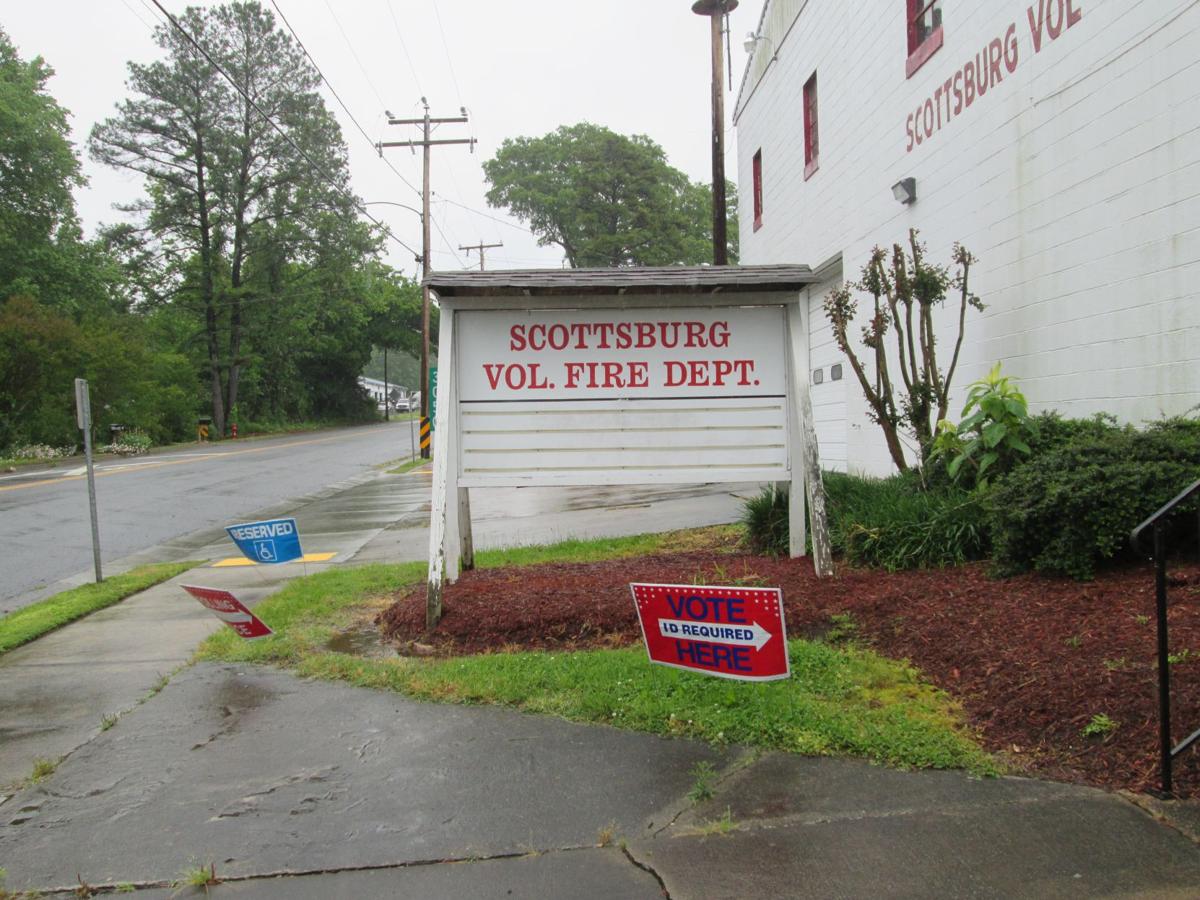 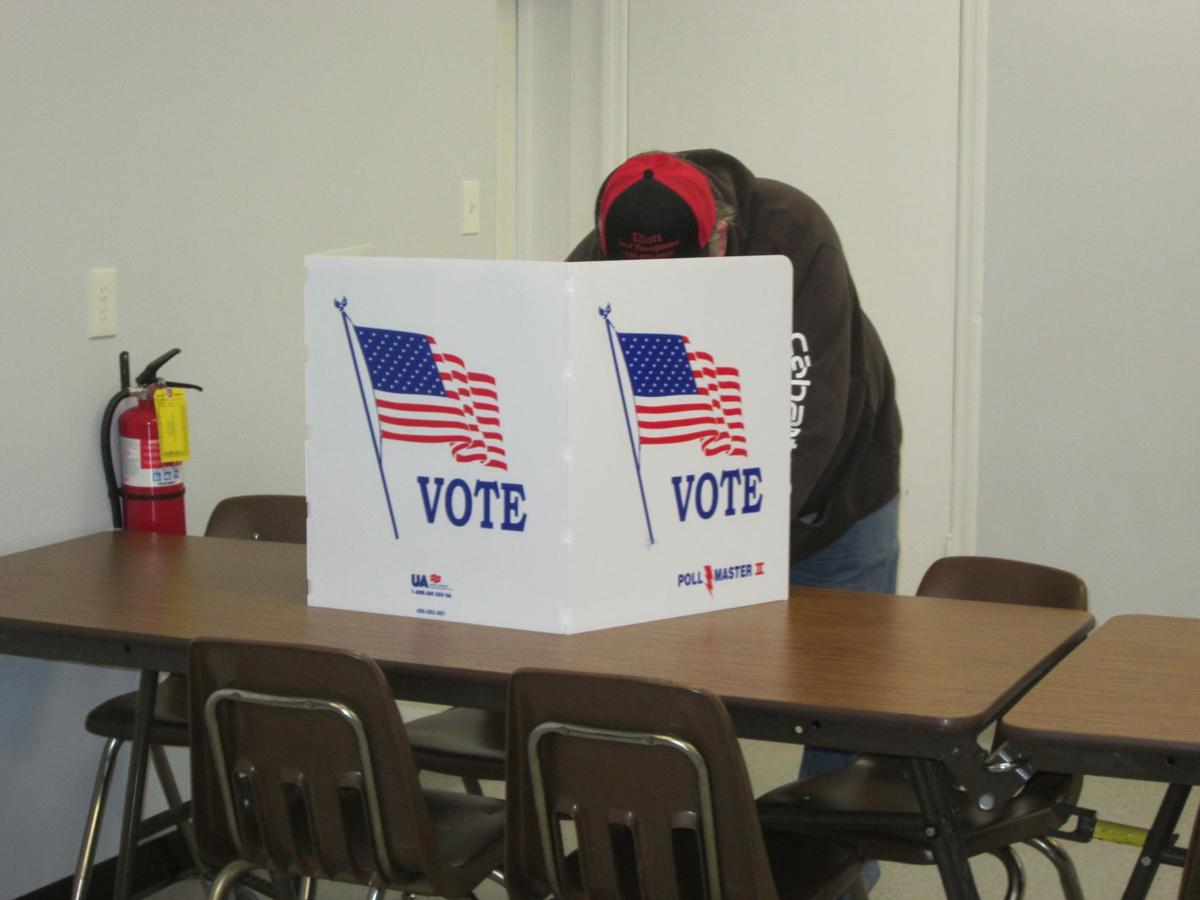 South Boston Town Council candidates and supporters don their rain gear and camp out at in the parking lot of the South Boston Recreation Center for Tuesday’s election including (from left) to right are Jayne Elliott (not running for council), her husband Tommy Elliott, Michael “Mike” Byrd, vice-mayor Tina Wyatt-Younger, Robert “Bob” Hughes, Joseph “Joe” Chandler and Harriett Claiborne.

Jerry Ragsdale casts his ballot in Tuesday’s South Boston Town Council election. He came out to vote for Mayor Edward “Ed” Owens, who was running unopposed for another term as mayor.

The rain did not keep voters from heading to the polls Tuesday for town council elections in South Boston and Scottsburg.

“We thought the rain would be a factor, but we’ve had a good turnout. Overall, it’s amazing that people are coming out to vote in this weather,” said South Boston’s vice mayor Tina Wyatt-Younger, an incumbent running for another four-year term on town council. “I’m looking forward to four more years on town council.”

Wyatt-Younger and the other five South Boston Town Council candidates — incumbents Robert “Bob” Hughes and Michael “Mike” Byrd, and newcomers Tommy Elliott, Joseph “Joe” Chandler and Harriett Claiborne donned their rain gear and camped out under tents outside the recreation center. Despite the rain, the candidates and voters alike had a sunny outlook on the election.

“We’ve maintained a steady flow of voters, and everybody has seemed optimistic and eager to vote, very pleasant,” said Ellen Kent, secretary of the Halifax County Electoral Board, who worked at the South Boston Recreation Center polling location. Kent added, “I think we’ve got a pretty good turnout this year for a town council election.”

April Throckmorton, chief election official at the Scottsburg Volunteer Fire Department, also said she was pleased with the turnout of voters, all factors considered.

“I think it’s going pretty good, especially with the weather and the coronavirus. Some of them have already voted early, as well,” Throckmorton said. Voters had the option of voting early by absentee ballot or by curbside voting in Tuesday’s election.

In the past, Throckmorton said the voter turnout for a town council election has ranged from 17 voters to 50 or more.

“It’s not a big town, so there aren’t a lot of voters, but I hope those that are able to come out do come out and vote today,” said Scottsburg town councilman Robert D. Elliott, who was running for reelection. He was first elected as a town councilman in 2000.

“I’m doing it as a civic duty,” said Elliott, of his run for reelection. “I would like to see the town grow. We’re trying to have a safe little town and we want it to prosper.”

The South Boston Town Council candidates also said they were happy to see the healthy number of voters coming to the poll in spite of the cold, driving rain and the change in election date because of the COVID-19 pandemic. Local elections are normally held on May 5, but this year, Gov. Ralph Northam postponed them for two weeks.

“I think this election is different from any other election we’ve had in the past because of the change in the election dates and the confusion it has caused for voters,” Hughes said. “For the people who are coming out to vote today in pouring down rain and roughly 48-degree temperatures, I am so grateful for them, whether they vote for me or not. They are taking part in the future of South Boston. My gratitude to those who have voted is beyond thankfulness.”

Chandler also said he was “very grateful” to the people of South Boston who came out in the rain to vote in the town council election.

“For me, the first time running for office, it’s been an interesting experience and it’s something I’m glad I’ve been able to do. I’m truly appreciative of the support people have given me at the polls and their confidence in me,” Chandler said. “We’ve got six good people running. We’re not going to have any losers today. Regardless of how it turns out, South Boston is going to be a winner.”

The election was Tommy Elliott’s first time running for public office, as well.

“This is my first election. It’s been a challenging election with the uncertainties with the virus and not being able to get out and meet with the people,” Tommy Elliott said. He added, “It’s playing out fairly, and I hope for the best.”

Claiborne, also a newcomer running for town council, expressed her gratitude to the voters for coming out to the polls.

“I can totally appreciate everyone coming out today, in that it is so cold and rainy and dreary,” Claiborne said. “Everybody’s voice needs to be heard, and that voice can only be heard by voting for your appropriate candidate. Let your voice be your microphone. Speak out … Let’s move South Boston forward.”

Bertram and Loretta Cuffley were among the South Boston residents who voted in Tuesday’s election.

“It’s our civic duty to vote. It’s important to vote,” Bertram said. “You want to be part of the process. You’ve got to cast your ballot so you’re not disappointed in the outcome.”

Loretta said she would like to see “more economic opportunity, especially for young people” in South Boston. The Cuffley’s moved to South Boston from Connecticut and said they have enjoyed the small-town atmosphere.

South Boston resident Jerry Ragsdale’s reason for coming to the polls was simple.

“I came out to vote for the mayor,” Ragsdale said. South Boston Mayor Edward “Ed” Owens is running unopposed for another four-year term.