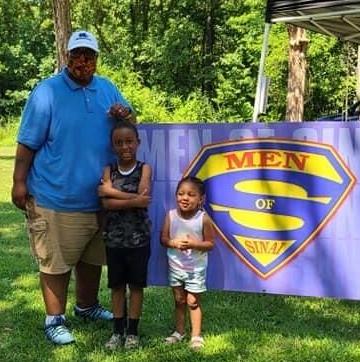 Anthony Womack (left) founded the Men of Sinai in May. The group is committed to making positive changes in the west end South Boston community of Sinai. 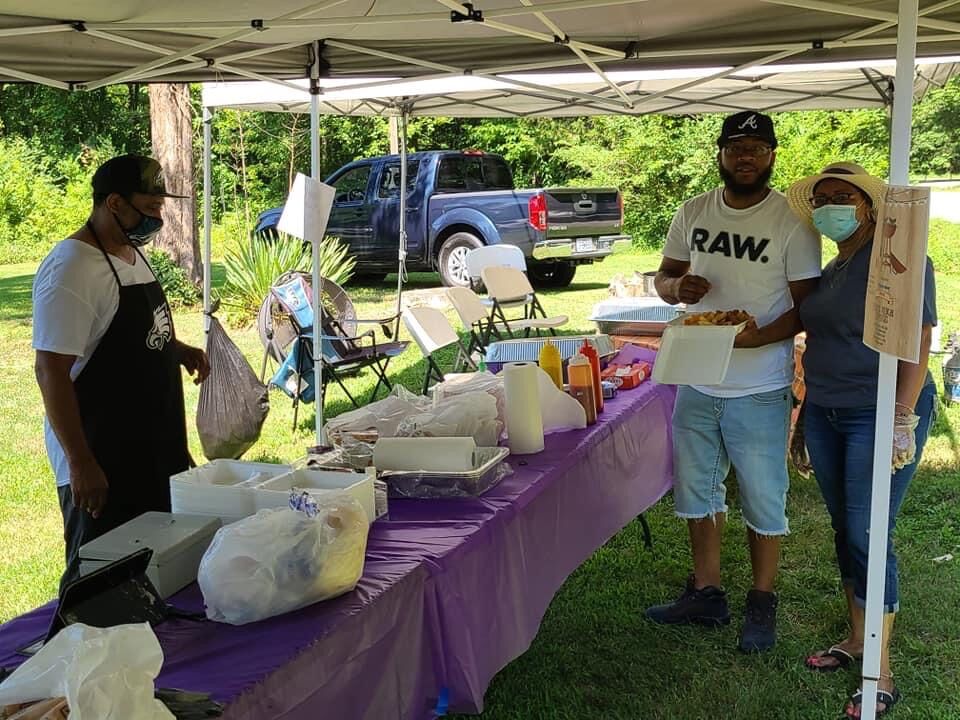 The Men of Sinai held a fish fry on July 18 to raise money for a community member who is battling cancer. Helping community members in need is one of the group’s missions. 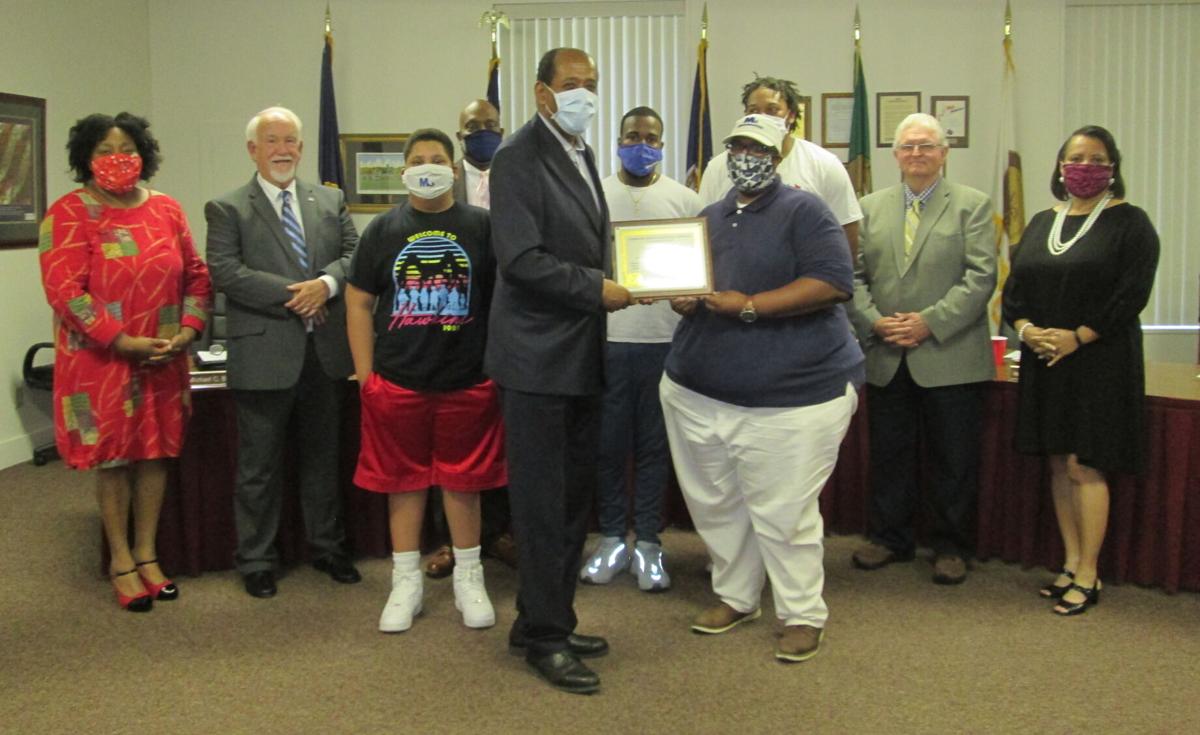 Anthony Womack (left) founded the Men of Sinai in May. The group is committed to making positive changes in the west end South Boston community of Sinai.

The Men of Sinai held a fish fry on July 18 to raise money for a community member who is battling cancer. Helping community members in need is one of the group’s missions.

They might not be real life super heroes, but their good deeds are making the Sinai community a better place. They’re the Men of Sinai, and you can’t miss them walking around wearing their T-shirts with a Superman logo on them, performing acts of service from mentoring the youth to helping elderly neighbors with yard work.

“You might see us with the Men of Sinai T-shirts on, out picking up trash,” said Ryall Majors, one of the group’s members.

Sinai resident Anthony Womack founded the Men of Sinai in May, after deciding it was time to make positive changes in his community on the west end of South Boston.

“It’s my part in giving back to see Sinai become better than what it is. We’ve got some work to do as a community,” Womack said. “There’s a great need for what we’re going to do and what we’ve already started. It’s going to be on the basis of empowerment and instilling that in the youth that’s coming up – the ability to succeed, dealing with the obstacles that we men have overcome…There’s a lot of guys in the group who have already been through some stuff.”

One of those members is Majors. At the age of 46, the Sinai native said he has “seen a lot and been through a lot,” and he wants to use his life experiences to mentor the young men of the community and lead them on the right path.

“I joined the Men of Sinai because I was born and raised in Sinai. I felt like it was time for a change, something positive,” Majors said. “We’ve got a whole lot of younger men, teenagers, they’re misguided in the wrong way. We want everybody to go in the right direction, a positive way…I’ve been through a lot in life. I felt the least I can do is be a part of this and know that I made a change.”

Another member, Aaron Hodges, said joining Men of Sinai was a “no brainer” for him because he sees “a lot of good things” resulting from doing good deeds for people in the community who are in need of help and being a positive role model for the youth.

“I don’t mind giving back to the community and helping with the youth to guide them in a very positive way, so that they don’t resort to gang violence, or other negative things that could hinder them from being successful or accomplishing any dream that they might have,” Hodges said.

Hodges recently led the Men of Sinai in coordinating a fish fry July 18 to raise money for one of his neighbors on Meadow Lane who is battling cancer. The fish fry raised more than $1,000 toward Hodges’ neighbor’s medical bills.

“We want to let our neighbors and community members know, ‘What you’re going through, you’re not alone,’” Hodges said.

Womack explained the premise of the Men of Sinai group is based on the third tier of psychologist Abraham Maslow’s hierarchy of human needs.

“It is based on that sense of connection, a sense of love, a sense of belonging,” Womack explained. “Meeting that need for belonging promotes self-esteem. Once you have your needs met, you’re going to go out and help someone else.”

Along with fostering a strong community spirit of neighbors helping neighbors, the Men of Sinai also are committed to making the community a safe place to live. Womack started advocating for the safety of the Sinai community at a South Boston Town Council meeting in May. He brought safety concerns to the council’s attention, including the lack of a sidewalk for pedestrians along Route 654 (Sinai Road), which has a high volume of foot traffic, and the lack of a public park in the community.

“The Men of Sinai are committed to making Sinai better than the things that are going on…We want to keep our community safe,” Womack said. “The side of the road has been dangerous for years, but people walk to the store and deal with that element of danger and deal with it like it’s normal, but it’s not normal. The shootings that happen on a regular basis, when you hear gunshots at least once a week, it’s not normal.”

What Majors envisions being the “norm” for the people of the Sinai community is being able to walk outside on their front porch and feel safe.

Womack believes having a public park will be a game changer in Sinai because it will provide a recreational outlet for community members.

“You’ve got a whole community out there with no type of outlet for exercise, there’s nothing for us to do,” Womack said. “Exercise creates a positive sense of well being. That’s what it promotes.”

While the town’s leaders are working to find a suitable place for a public park in the Sinai community, Womack said the Men of Sinai would do their part to make the park a safe place.

“We will do our part to make sure the park stays drug-free, and a nice, family-friendly environment for the Sinai community to enjoy.”

The Men of Sinai started with about 30 members, a mixture of young and older men, and Womack said every man in the group is committed to the group’s overall mission. The town of South Boston has already taken notice of the Men of Sinai’s work in the community. South Boston Mayor Edward “Ed” Owens presented the Men of Sinai a certificate of appreciation at the June 30 council meeting.

As the Men of Sinai group grows and evolves, Womack said the group’s membership is branching off into different committees with specific focus areas including employment, clothing/food assistance, activities and education to benefit the community as a whole.

The Men of Sinai’s founder added he hopes seeing the positive changes in the Sinai community will inspire the men of surrounding communities, such as Birchland Park, to form similar groups.