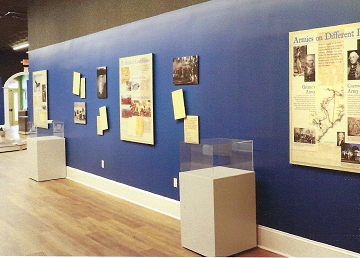 A ribbon cutting for the Revolutionary War “Crossing of the Dan” exhibit at the South Boston-Halifax County Museum of Fine Arts and History is set for Saturday at 10 a.m. during the virtual 240th commemoration of the Crossing of the Dan. The museum will be open to the public from noon until 3 p.m. to see the exhibit. 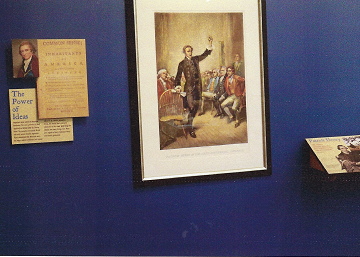 A ribbon cutting for the Revolutionary War “Crossing of the Dan” exhibit at the South Boston-Halifax County Museum of Fine Arts and History is set for Saturday at 10 a.m. during the virtual 240th commemoration of the Crossing of the Dan. The museum will be open to the public from noon until 3 p.m. to see the exhibit.

The Revolutionary War “Crossing of the Dan” exhibit at the South Boston-Halifax County Museum of Fine Arts and History will officially open on Saturday following the virtual 240th commemoration of the Crossing of the Dan.

The 10 a.m. Zoom event will feature a ribbon cutting for the exhibit lead by Paul Smith, president of the museum.

The museum also will be open to the general public from noon until 3 p.m. on Saturday to view the new exhibit. Masks are required, and social distancing is expected.

For those who would like to watch the virtual commemoration beforehand and who registered for the event by Monday should receive a Zoom meeting number and password on Thursday to watch the event online.

“This new exhibit has been more than a year in the planning and implementing and is now complete. We are very proud to have the ‘Crossing of the Dan’ exhibit here at the museum as its new permanent home,” said Smith.

He added, “Once you see the exhibit, we feel confident you will agree that the exhibit will serve the museum and the community well by promoting this historical event that helped to solidify the American colonies’ resolve for independence and freedom.”

According to the book, “The Race to the Dan – The Retreat That Rescued the American Revolution” by Larry G. Aaron, historian Douglass Powell noticed the upper level of The Prizery would be an ideal spot for the exhibit after noticing a window had “the perfect view of Boyd’s ferry site.”

As stated in the book, “That ferry site, along with Irwin’s ferry four miles upstream, was used by Nathanael Greene’s army as his men escaped the clutches of Cornwallis’ veteran British troops in the Race to the Dan during the winter of 1781.”

Powell, also a board member of the Halifax County Historical Society, began promoting the idea, and through the leadership of historical society president Barbara Bass, the society worked to make his idea become a reality.

Work on the exhibit began in 2004, and the historical society began raising funds. Over the years, its been used for educational opportunities and for the commemoration of The Crossing of the Dan.

Over the past year, it was decided a move was necessary to increase the exhibit’s public visibility and increase visitor access, and the society assisted financially in the move.

“It will be the same exhibit that people have come to know and love but with a fresher, more modern design,” Jennifer Bryant, president of the South Boston-Halifax County Museum of Fine Arts & History and designer of the updated exhibit said in the fall. “A couple of pieces of the exhibit will be rearranged for a more comfortable flow.”

Bryant said they used 3D printing to create a replica of what they would like the exhibit to look like and began working with contractors and volunteers.

Along with moving the Crossing of the Dan exhibit, staff also worked to move the Gov. William Munford Tuck exhibit to the area that used to house the Military History of Halifax County exhibit.

Repainting the walls of the museum, relocating the museum’s multimedia equipment and expanding the genealogy history and research center also were part of the renovation project.

Some renovations were delayed by several months due to the coronavirus pandemic, Bryant noted.

But now that it’s all in place, she’s excited for the public to witness it.

She also noted that another exhibit, the booming 1950s, would be available to the public when they reopen.

Keynote address: ‘I see nothing to prevent their future progress’

Michael Cecere, noted historian, author, and lecturer plans to deliver his keynote address, “I see nothing to prevent their [in reference to General Lord Cornwallis and the British troops] future progress,” during the 240th Anniversary Commemoration of the Crossing of the Dan to be held virtually Saturday.

The virtual presentation is set to begin at 10 a.m. Saturday via Zoom.

The annual historical celebration will coincide with the ribbon cutting and re-opening of the Crossing of the Dan permanent exhibit at the South Boston-Halifax County Museum of Fine Arts and History.

Cecere’s address is derived from a quote from General Nathanael Greene’s to Governor Thomas Jefferson written on Feb. 15, 1781, just a day after the American army crossed the Dan River. He of course, is talking about General Cornwallis’s British army that is in pursuit of him.

During the talk, Cecere plans to discuss the situation in the winter of 1781 in both the Carolinas, as well as, in Virginia. Specifically, that means he will be addressing Benedict Arnold’s invasion of Virginia in January, the Battle of Cowpens and Daniel Morgan’s deliberate withdrawal, the Race to the Dan, the situation in Virginia in February, and reinforcements for General Greene.

Cecere was raised in Maine but moved to Virginia with his wife Susan in 1990, where he discovered a passion for American History. After 25 years in the classroom in northern Virginia, Cecere and his wife moved to Williamsburg where they thoroughly enjoy the slower pace and historic atmosphere.

He currently teaches U.S. History courses for Gloucester County High School and Rappahannock Community College and in the summer, grows tobacco as a volunteer interpreter with Colonial Williamsburg.

He was recognized by the Virginia Society of the Sons of the American Revolution as their 2005 Outstanding Teacher of the Year and is an avid Revolutionary War re-enactor.

He also is the author of 16 books and numerous articles on the American Revolution. His work focuses primarily on the role that Virginians played in the American Revolution and his latest book, entitled “General Peter Muhlenberg: A Virginia Officer in the Continental Line,” (June 2020) looks at the life and service of the Fighting Parson of the Shenandoah Valley.

Cecere has just submitted a new manuscript highlighting the role of the southern colonies in the first eighteen months of the war. A future text will explore the role of the Virginia Continentals in the conflict.

—Special to the Gazette

Camp at Boyds ferry on the Dan River

I wrote your Excellency a short letter at Guilford Court house, and referd you to my letter to Baron Stuben respecting the movements of the enimy. Since then the enimy have been pressing our rear every day. We have crossed the Dan, and I am apprehensive they will cross it above us, at the horse ford. If they should they will oblige us to cross the Stanton branch of the Roanoke. Our Army is so great an object with Lord Cornwallis, and the reduction of the Southern States depend so much upon it, that I think it highly probable he will push us still farther; and I am not without my apprehensions that he will oblige us to risque a general action, however contrary to our wishes or interest, which cannot fail to prove ruinous to the Army as our force is but little more than one half the enemies, and there are few or no Militia that have joined us on our March, or at least not more than one or two hundred.

Should the enemy cross the Dan, and not be able to bring us to action, I imagine they will recross it and fall down the Country to Hallifax; which place I am taking measures to have fortified, to prevent their taking post there. But your Excellency will not take this for granted; for it is by no means certain, that Lord Cornwallis will not push through Virginia. It is to be lamented that so little a force should march through an extent of Country of several hundred Miles without a check. Unless our Army is greatly reenforced I see nothing to prevent their future progress. If the Militia is called out let them be put under Continental officers, that are or have been in service. One half the force officerd in this way, will give more effectual support, than double their numbers upon the common footing, in which the Militia take the field.

Cavalry are so essential to the service as well to prevent the enemy from ravaging the Country on their march as to prevent their penetrating it, that I wish your Excellency to take the most effectual measures for fitting up the first and third Regiments of Dragoons; and I must beg leave to observe to your Excellency that the occasion is so pressing, that I think horses and every thing else necessary to their equipment, should be taken in any manner which will complete the business in the most speedy and effectual manner.

The Country is inevitably lost unless decided Measures are taken. You will consider the necessity and act accordingly. I have not time to enter into a farther detail of matters, being pressed on every side with a multiplicity of business, and almost fatigued to death having had a retreat to conduct for upwards of 200 Miles Manouvering constantly in the face of the enemy, to give time for the Militia to turn out and to get off our Stores. In addition to the common difficulties incident to all retreats we have had several large rivers to cross and the enemy at our heels before we could get over.2 Necessity has and will oblige me to take many measures to effect the removal of our Stores contrary to the established laws of the different States; the occasion must justify the measure, and I trust the Legislature will make charitable allowances accordingly. The Army is all that the States have to depend upon for their political existence. I trust therefore whatever is necessary to its support will meet their approbation.

I am with great respect Your Exy Mot Ob. Hb St,