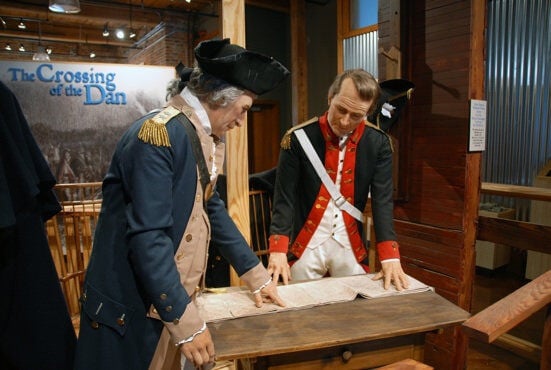 The Crossing of the Dan exhibit formerly housed at The Prizery has been moved to the South Boston-Halifax County Museum of Fine Arts & History. It will be unveiled in February. 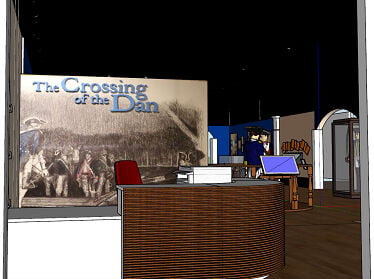 An exhibit showcasing a turning point of the American Revolution in Halifax County will have a new home soon.

The Crossing of the Dan exhibit formerly housed at The Prizery has been moved to the South Boston-Halifax County Museum of Fine Arts & History. The updated exhibit will be unveiled just in time for the commemoration of the Crossing of the Dan’s 240th anniversary in February. The museum and the Halifax County Historical Society are partnering on the refresh of the exhibit.

“It will be the same exhibit that people have come to know and love but with a fresher, more modern design,” said Jennifer Bryant, president of the South Boston-Halifax County Museum of Fine Arts & History and designer of the updated exhibit. “A couple of pieces of the exhibit will be rearranged for a more comfortable flow.”

She added the exhibit would combine modern elements such as new lighting and display panels with rustic elements such as wood floor paneling to showcase the event from the American Revolution in its proper historical context.

At the same time, the museum is preparing to reopen to the public the third week of September, with a new seasonal exhibit showcasing the history of elections, in particular presidential elections, and how they have impacted Halifax County.

Bryant said this exhibit would include information about the 100th anniversary of women gaining the right to vote, as well as a voting machine from the controversial Al Gore vs. George Bush election of 2000.

“We really want to make the museum moving forward a place that takes a more critical look at our history and focuses more on the details,” Bryant said. “We also want to take more of an educational role in bringing more special events and guest speakers to the museum and having more of a focus on activities so we can actively engage with the members of our community.”

The unveiling of the improved Crossing of the Dan exhibit at the museum will coincide with the 240th commemoration of the Crossing, which is shaping up to be the largest celebration of historical distinction since the restoration of the cotton mill, Bryant said.

Historians have noted the Crossing of the Dan as a turning point in the American Revolution of great historical importance to Halifax County. The museum’s refreshed Crossing of the Dan exhibit has been recognized by professionals in the field, even in its design phase.

“William Jacobs, exhibition design director for the Smithsonian, has written a letter of endorsement, formally recognizing this (exhibit) in some way as a very high quality project that will have a substantial impact in Halifax County,” Bryant said.

The famous Crossing of the Dan took place on Feb. 14, 1781. Gen. Nathanael Greene led his army across the Dan River near South Boston after the army had replenished its provisions and supplies, stranding British Lord Charles Cornwallis and his army on the other side of the river.

Greene achieved the feat by sending 700 of his men as a decoy toward the upper fords of the Dan River upstream from Dix’s Ferry in Danville, while his main army took the shorter route and crossed the swollen Dan River, with boats at Irvin’s Ferry and Boyd’s Ferry in Halifax County. The first British troops arrived just as the last of Greene’s army finished crossing the river and were unable to cross the river without boats.

Bryant added, “It’s an underappreciated part of American history, but anybody who has studied it can appreciate the technical brilliance of what Greene did…

While the museum staff is working on updating the Crossing of the Dan exhibit, they also are completing other major renovations.

The staff is moving the Gov. William Munford Tuck exhibit to the area that currently houses the Military History of Halifax County exhibit.

Repainting the walls of the museum, relocating the museum’s multimedia equipment and expanding the genealogy history and research center also are part of the renovation project.

“This is fundamentally changing the way we operate. We’re very excited for the change,” said the museum director.

Bryant said the museum has received generous financial contributions for its renovation project but still appreciates contributions from community members.