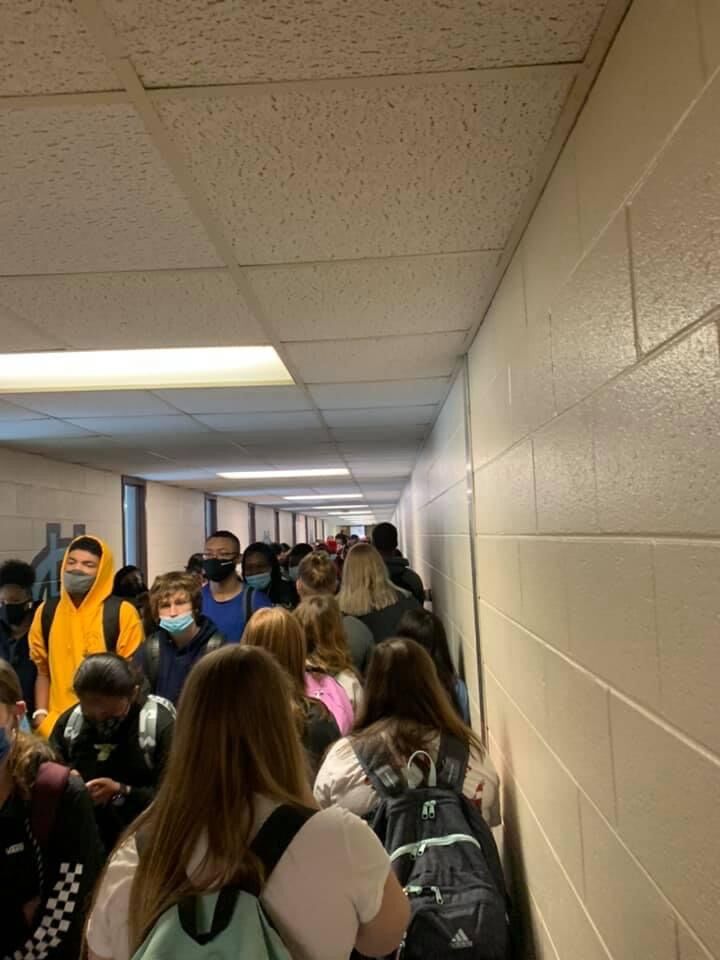 This picture posted on Facebook depicts a crowded hallway in Halifax County High School. Students recently have voiced concerns about the lack of social distancing at the high school. 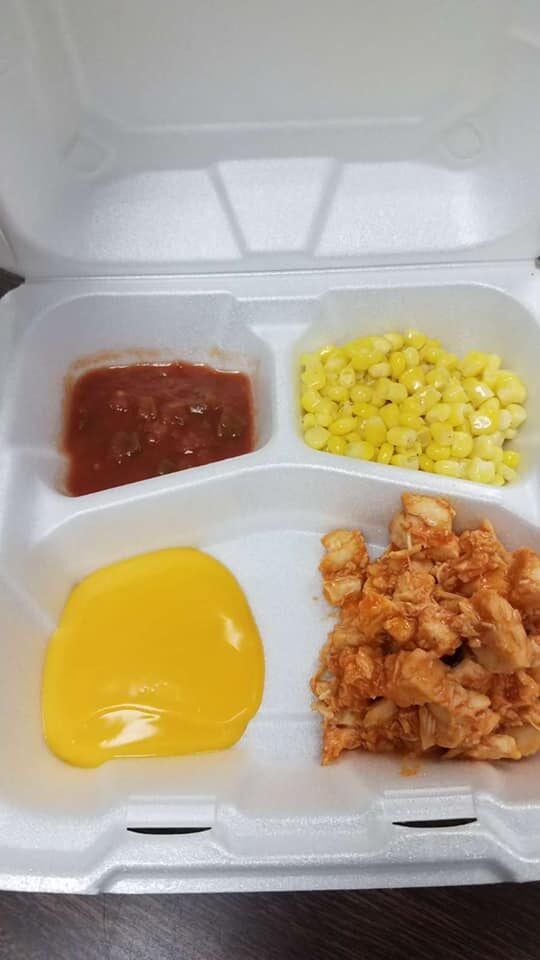 Pictures of lunches like this served at Halifax County High School shared on social media have sparked an outcry from parents about the quality of food served. Starting this week, additional lunch options such as a salad and sandwich are being offered to students at the high school.

Since then, Halifax County Public School administration has taken steps to offer the high school students more lunch options and responded to the other concerns. Halifax County School Board also voted Monday evening to put out a request for proposal for a new food service contract.

“At the end of the day, our students’ safety is a top priority for us,” said Halifax County High School principal Michael Lewis. “We have not had a COVID-19 transmission within the school building at this point, and we’re hoping to maintain that with the safety strategies we have in place.”

While cases of COVID-19 have been reported at the high school, Lewis explained none of those cases were transmitted between students within the school building.

HCPS superintendent Dr. Mark Lineburg, at Monday evening’s school board meeting, maintained that safety protocols are being followed each time he visits schools. He said masks are being worn and that social distancing is being enforced.

“I’m proud of our staff and students,” he added.

Senior Giovanni Fanelle said he worries about crowded hallways and safety protocols not being followed.

Fanelle added some teachers were not sanitizing the tables in their classrooms at the end of the day, either.

With cases of COVID-19 already confirmed at the high school, Fanelle said he is apprehensive about potentially contracting the virus and passing it on to his mother, Amy Hawkins, whom he says has eight different autoimmune diseases. Fanelle would like to see the students return to an A/B day rotation schedule so there would be fewer students in the school at one time.

School board student representative Tanaya Brandon, a senior at the high school, also voiced concerns at the school board meeting of crowded hallways and stairwells.

“There have been four reported cases in the high school, and we feel you cannot effectively contact trace because that student comes in contact with not only students and teachers in their classes, but other students when trying to maneuver in the crowded stairwells and hallways. As a solution to this issue, we feel we should go back to hybrid learning,” said Brandon.

“Classes were not sanitized and we were almost shoulder to shoulder,” Powell related. “I was in class and I could have stretched my arm out and smacked the boy next to me in the face. I was hit three times in the face just going upstairs from all the overcrowding.”

Lewis said schools’ requirement from the Centers for Disease Control and Prevention is to provide three feet of social distancing between students “when feasible.” He said the school is doing its best to maintain social distancing in the classrooms, but it is not always possible during transitions between classes.

“It’s certainly a challenge to provide any kind of social distancing in the hallways and the stairwells. Our hallways are narrow,” Lewis explained, adding, “Because the class changes are relatively short, students’ exposure to another student in a hallway or a stairwell is not a lengthy time of exposure. It is considered by the CDC to be a very low risk of transmission of COVID-19 when the exposure is less than 15 minutes.”

In addition to striving to maintain social distancing, Lewis said the school has discussed with students the importance of not having physical contact with other students and frequently washing their hands.

ED-8 trustee Walter Potts asked Lineburg if they had talked with Sodexo, who currently contracts with the schools for food services, about the recent complaints about food.

ED-5 trustee Freddie Edmunds made a motion Monday evening to put out a request for proposal for a food service contract, which was seconded by ED-3 trustee Sandra Garner-Coleman. The board unanimously approved the motion. ED-7 trustee Keith McDowell was absent from the meeting.

HCPS has been contracting with Sodexo for its food services since 2014. Gwen Nunn, food service liaison for HCPS, said this is the last year of HCPS’ service contract renewal with Sodexo.

Last week, parents raised questions about the adequacy of the lunches after students posted pictures on social media. After the outcry, the school system and Sodexo met and made a decision to offer more lunch options at the high school.

“We are going to start offering cold options like a large salad or a sandwich, along with a hot meal option,” said Jennifer Chappell, general manager for Sodexo. She added those extra options would be offered to students starting (Wednesday) today.

In addition, snack lines were reinstated in the lunch line at the high school starting last week. Nunn explained they had closed because of COVID-19 restrictions.

On Monday, Powell said an email had been sent to the students asking them to select their top three cold food lunch choices and top three hot food choices from a list of options.

“The school meals have been improved,” Powell explained.

Beverly Smith, mother of a freshman at the high school, also voiced her concerns about the school lunches calling the photos of lunches “a little disturbing, a little bothersome.”

One of the photos depicted an entrée labeled “chicken alfredo,” a side of corn and a breadstick. Smith said she normally tells her children if they do not like all the food items on the plate they are served to pick out one item they like and eat that, but on the tray of food she saw depicted, “it didn’t look like there was any good option.”

Smith explained her son Levi always packs his lunch, but she wanted to see other lunch options such as a sandwich or a salad for students who do not have the option of packing a lunch at home.

“I think there should be another option,” Smith said, ahead of the school system and Sodexo’s decision to offer additional lunch options to students. “A lot of kids in our county don’t have meals cooked, and a lot of kids don’t have anybody at home to pack them lunch.”