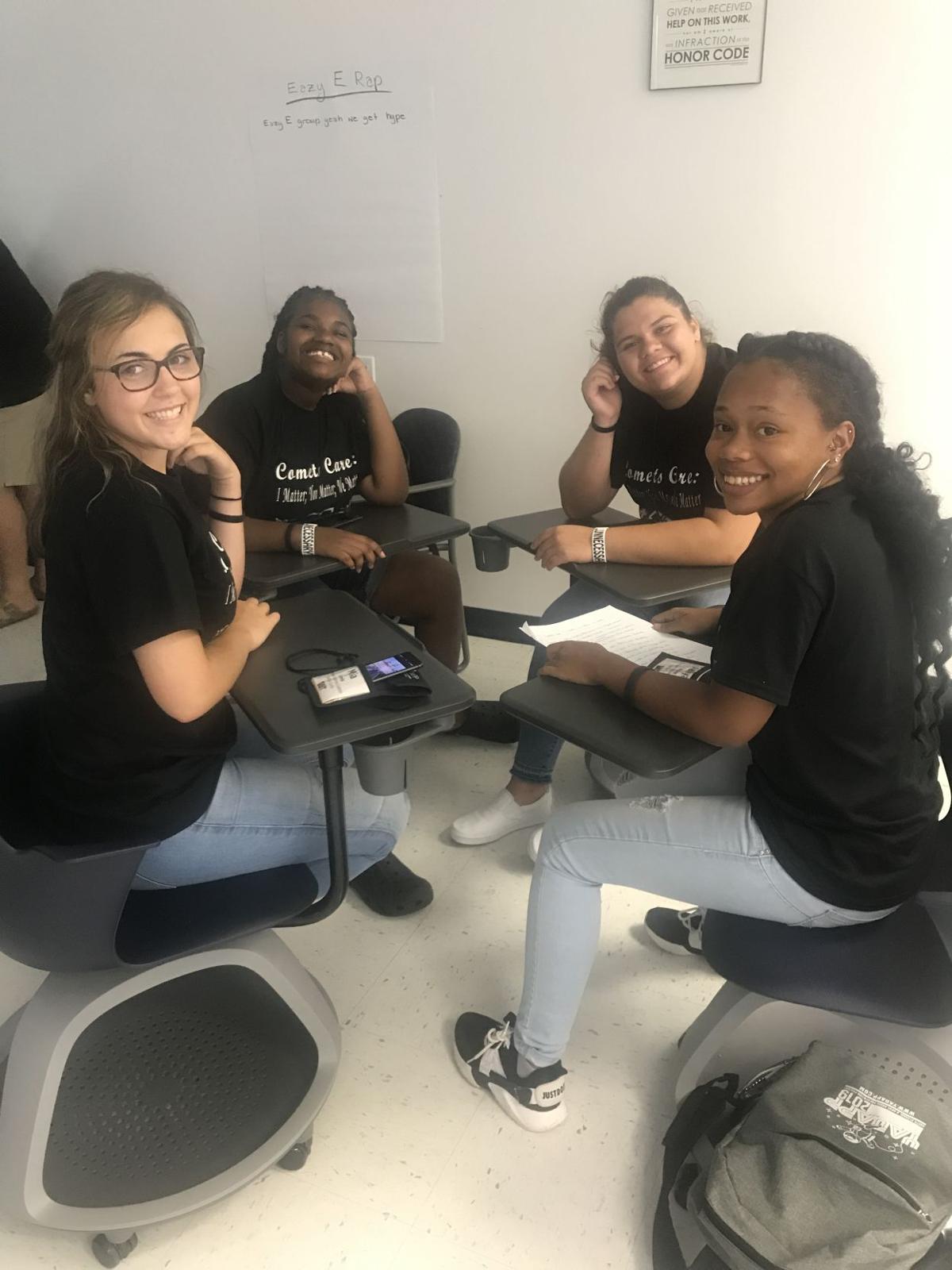 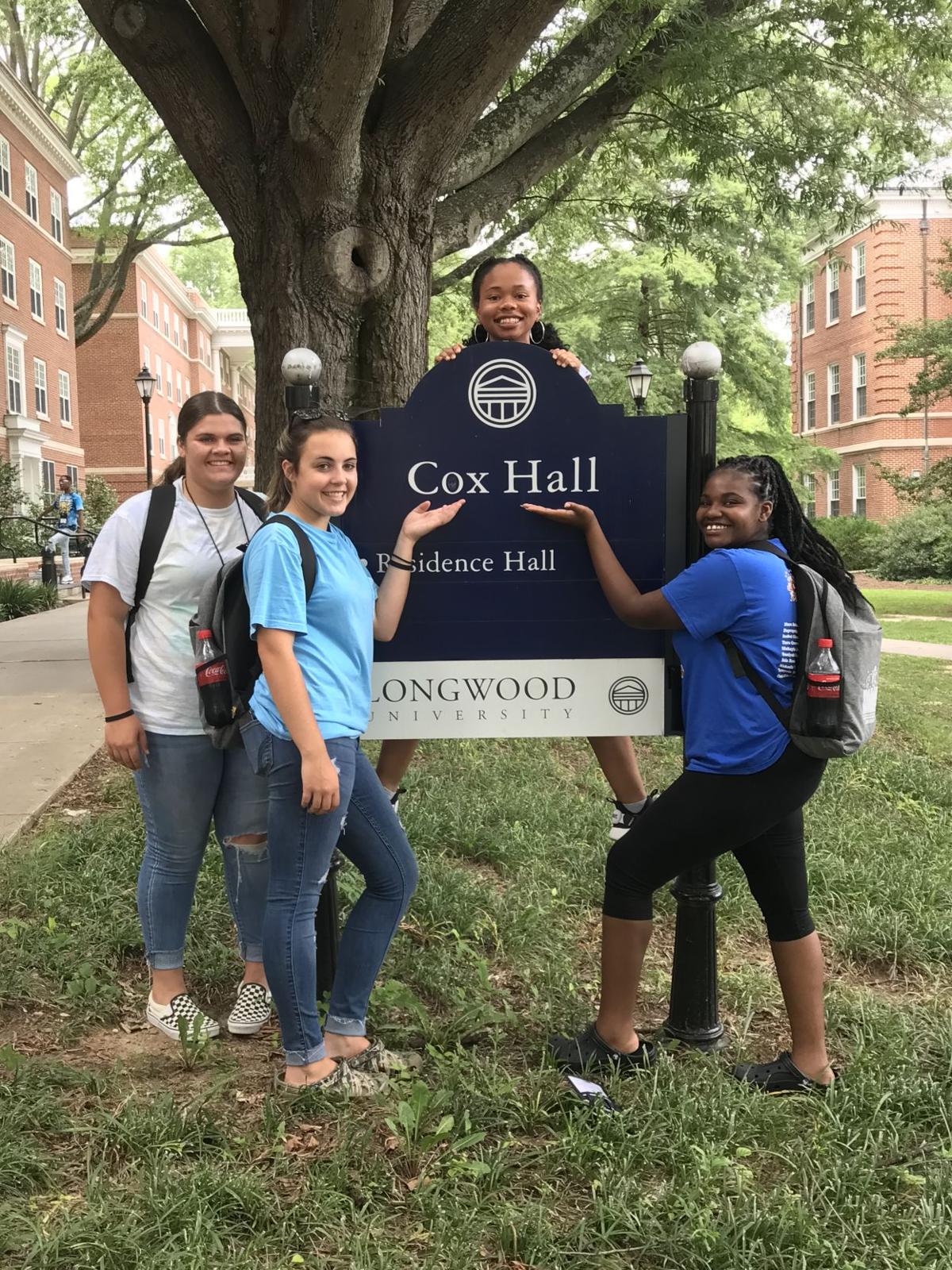 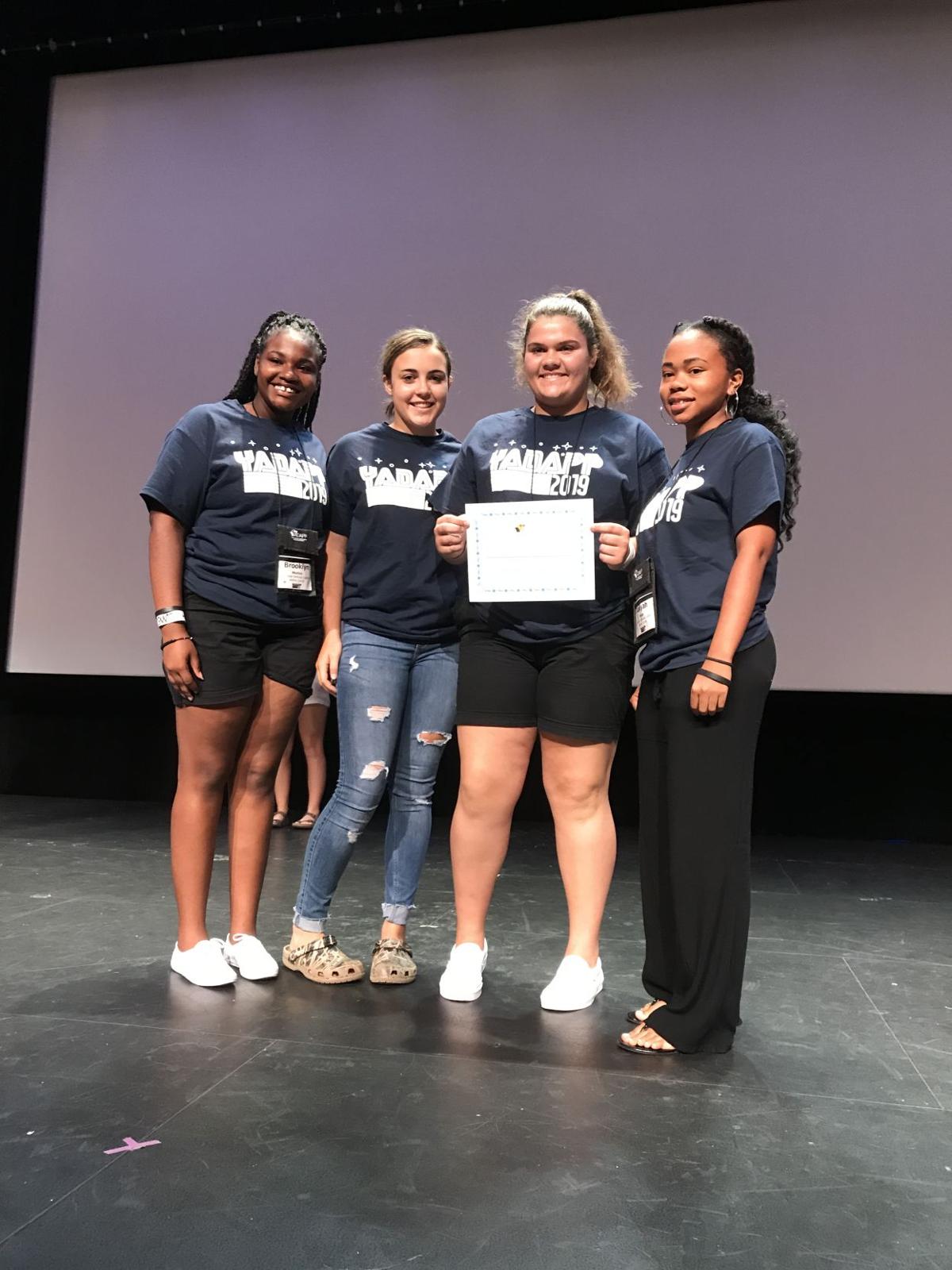 Each team at the conference had to form a STAN plan detailing how they planned to address substance abuse during the next school year, and the plan on Juuling created by Comets Care students Aaliyah Paige, a 17-year-old senior, 14-year-old Jadyn Harlow, 13-year-old Mia Lewis and 14-year-old Brooklyn Morton earned them this $250 mini grant. 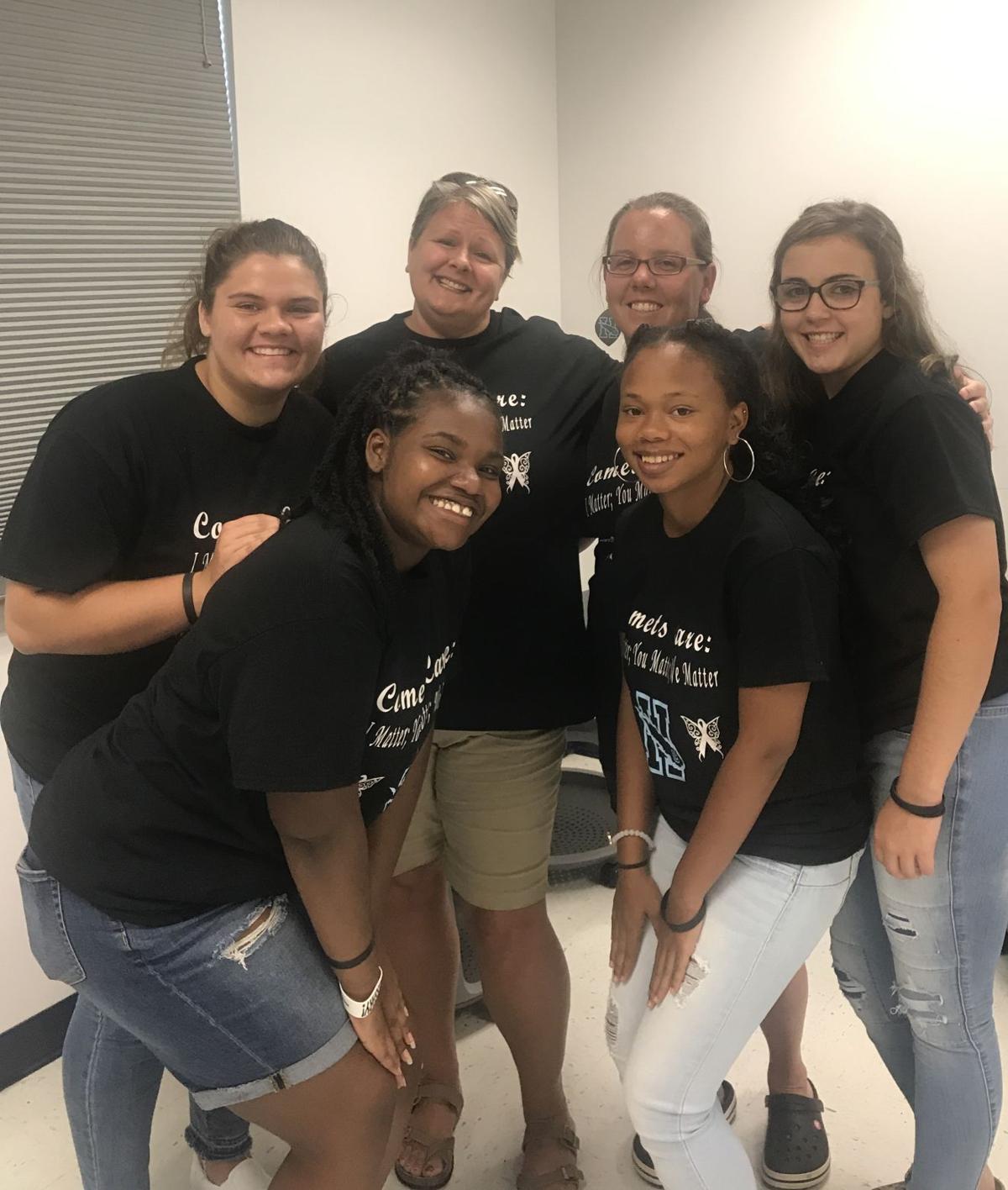 Each team at the conference had to form a STAN plan detailing how they planned to address substance abuse during the next school year, and the plan on Juuling created by Comets Care students Aaliyah Paige, a 17-year-old senior, 14-year-old Jadyn Harlow, 13-year-old Mia Lewis and 14-year-old Brooklyn Morton earned them this $250 mini grant.

“I matter; you matter; we matter,” is the message some Comets students hope to get across with their newly formed organization, “Comets Care.”

It’s a club in the making dedicated to letting Comets know they’re not alone no matter how alone they feel, and members are there to help with mental illness and to address alcohol and drug prevention, according to sponsor Kimberly Gordon.

Southside Wellness Coalition prevention coordinator Kenan Tyner-Smith originally asked Gordon if she would help her start a team the coalition could sponsor from her area — which includes Halifax County, Mecklenburg County and Brunswick County.

“Mental health and substance abuse has kind of become my baby here in the past year. There’s obviously a need, and after going with these girls (to a conference), I’ve found out there’s more of a need. Our kids are doing things that we don’t know what they’re doing,” said Gordon.

They all recently attended a five-day YADAPP conference at Longwood University, thanks to the coalition, and Chris Davis with Perfect Timing provided Comets Care T-shirts they plan to sell at later events.

YADAPP stands for Youth Alcohol and Drug Abuse Prevention Project, and it is a peer-led program for high school students to address underage substance use at the high school level.

The Strategies to Act Now, or STAN Plan, was the focal point of the conference.

Each team at the conference had to form a STAN plan detailing how they planned to address substance abuse during the next school year, and Paige, Harlow, Lewis and the plan by Morton on Juuling earned them a $250 mini grant.

According to the National Center for Health Research, a “Juul” is a type of e-cigarette that is especially popular among children and young adults that comes in flavors such as cool mint and fruit medley.

Due to the concentration and contents of its Juul pods, the center for heath research indicates the amount of nicotine in one Juul pod is equivalent to a pack of cigarettes.

Juuls, according to the research center, require a non-refillable Juul pod cartridge that clicks into the Juul and contains a nicotine e-liquid formula, twice as concentrated as a similar e-cigarette device.

They plan to use that grant for supplies, and they plan to man informational tables at open house, freshmen orientation, home football games, National Night Out, parades and other local events.

Halifax County Public Schools have a policy in the code of conduct that bans “the use or distribution of any tobacco product or nicotine vapor product, on a school bus, on school property or at an on-site or off-site school-sponsored activity.”

Nicotine vapor product includes any form of electronic cigarette, but members of Comets Care feels it should specifically point out “Juuling.”

As these Comet Care students have witnessed, Juuling has become popular among eighth grade, ninth grade and 10th grade students.

Harlow explained students are using their hoodies to get by with sneaking into the school and other events with the nicotine product, and they are going to extreme links to get them.

And, she’s not only focused on nicotine products. She also wants to help with alcoholism.

“We have had problems with having an alcoholic in my family, and I’ve seen a lot of kids have started doing it at a very young age, so I just wanted to try to help them,” said Harlow.

As a senior, Paige also has seen the effects of alcohol and drugs first hand.

“For me being a high schooler already and being in the atmosphere, I see first hand the effects of substance abuse on the kids, and I’m all about making a difference. If it means me spending a summer learning information where I can go back and save a life in high school, then I’m all for it,” said Paige, and Lewis agreed saying she too “wants to a make a difference in children’s lives.”

In addition to forming their STAN plan, these students also listened to many speakers including Governor Ralph Northam and motivational speakers Brandon White, Javier Sanchez and Darryl Bellamy.

Harlow connected with Bellamy’s speech on being fearless and attacking head-on what someone is most afraid of, while Lewis enjoyed White’s motivational words.

“He was all about owning it. When you make a decision, own it,” said Lewis.

And Paige said she will never forget a quote shared by Sanchez, “We don’t go through life, life goes through us.”

But for Gordon and Hall, they enjoyed more than anything seeing their students perform.

On Monday, these teachers said they watched a group of students filled with apprehension in a new environment surrounded by strangers slowly open up as the week went on to the point where they presented on stage with ease, and Morton even performed a song on stage during the talent show.

These girls also won a door decorating contest having the theme “Launching leaders for a better tomorrow,” which led them to use space decorations capped off with Buzz Lightyear and the words, “Keep drugs out of this.”

Even though these students worked hard during the conference to learn ideas to bring back to Halifax County, their efforts didn’t stop there.

Gordon and Hall said these girls have continued to give them ideas throughout the days after the conference.

Harlow is working to set up a motivational speaker who wants to share his story in hopes it will help others not turn to self-medicating.

“These children have issues that we couldn’t begin to understand,” said Hall who grew up in a time before internet and social media.

If she had issues with people at school, it ended when she left school. But in today’s world of cell phones and other electronics, she said these students can’t escape it.

“I think they’re not able to get their feelings out, and it often leads to self-medicating,” said Hall.

Gordon pointed out she and Hall are not counselors, but they can help point students in the right direction starting first with the school’s guidance counselors -- then they could be referred elsewhere if needed.

Comets Care plans to meet on the second Wednesday of every month at Halifax County High School, and all high school and eighth grade students are welcome to attend. Eighth graders can ride the activity bus to the high school after school.

If anyone would like to support Comets Care through a monetary donation or supplies, email Gordon at kgordon@halifax.k12.va.us or call 434-575-4774.