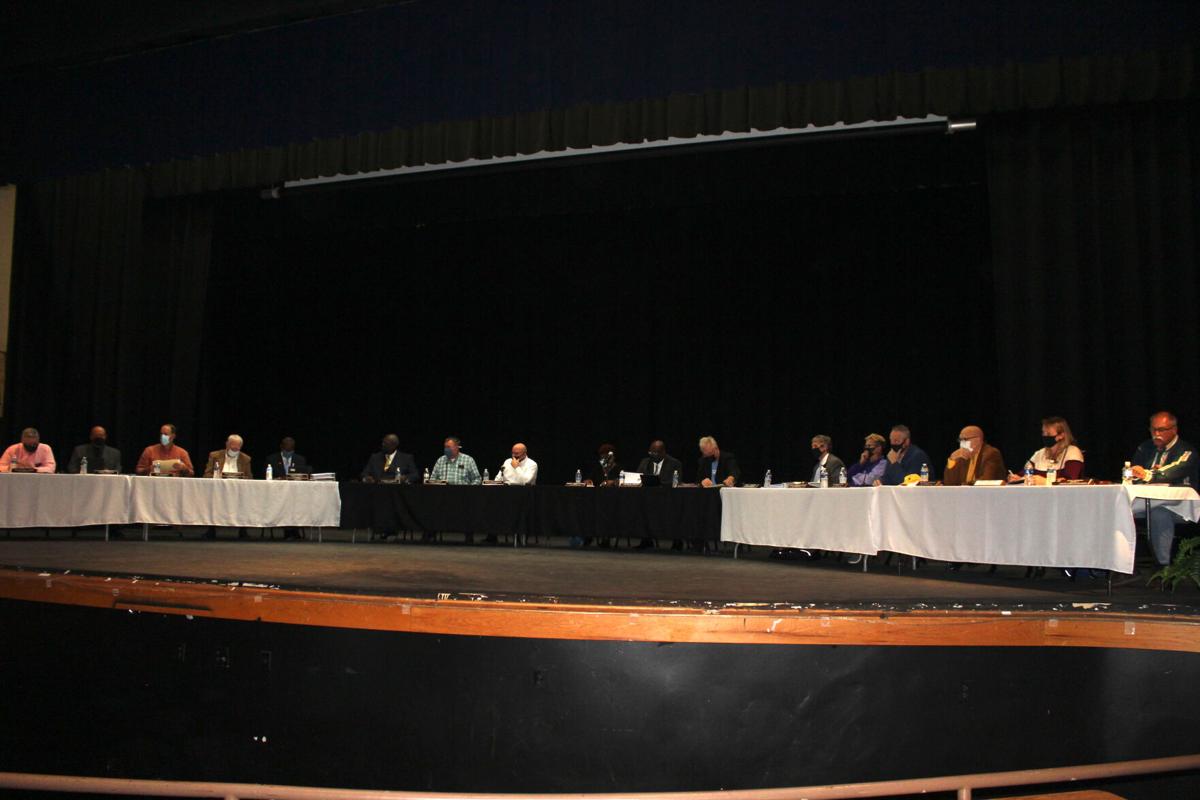 The Halifax County Board of Supervisors and Halifax County School Board meet Thursday for a joint meeting to address the high school and employee compensation. 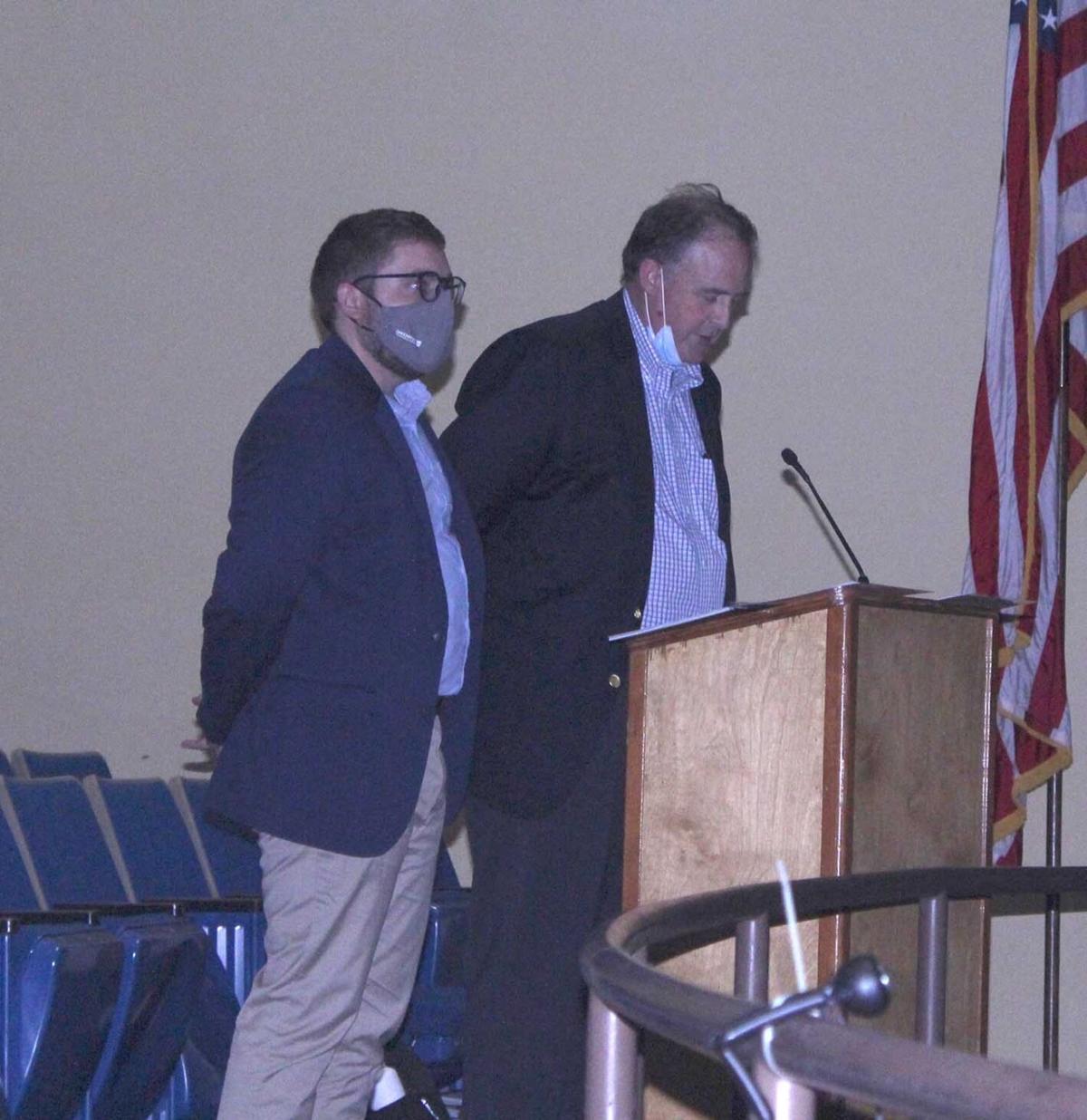 Ted Cole, senior vice president and manager of public finance with Danvenport, and Ben Wilson from Davenport provide a school schools capital funding analysis during a joint meeting Thursday with the Halifax County Board of Supervisors and school board.

All Halifax County School Board employees will be placed on a new salary scale starting Jan. 1 if Halifax County Board of Supervisors approves the school board’s use of carryover funds when they meet in December.

The school board made the decision to increase all employees’ pay when they met with supervisors Thursday evening at Halifax County High School and asked supervisors to allow them to use $3.2 million in carryover capital funds for compensation.

The cost to implement the approved teacher pay scale is $1,864,000, and the school board would need $764,000 of that from supervisors. An additional $797,800 is needed to support the graded pay plan for support staff and administration each year from that $3.2 million.

After the school board approved the salary scales, county administrator Scott Simpson asked the school board to provide supervisors with a memo of what exactly they need for the current fiscal year and how much going forward.

ED-6 supervisor Stanley Brandon also told the school board that he thinks they’re doing the right thing, however, he said, “I expect you to be more efficient.”

Originally supervisors believed the school board was only going to be asking for funding to cover the new teacher salary scale.

“My understanding was compensation was solely for teachers,” said Simpson.

“You’re talking a lot different than you did last week,” he added, referring to the joint facilities committee that met the week before. “The funding is not there without coming up with additional revenue.”

But superintendent Dr. Mark Lineburg disagreed saying, “We’re in the ballpark to accomplish this.”

Incoming ED-6 school board member Lacey Shotwell pointed to the need for these salary increases saying some school districts are having to close schools due to not having teachers or bus drivers.

“There’s no way we can keep running if we don’t pay our staff. If we don’t pay them in January, we’re going to lose even more people,” she said.

ED-4 supervisor Ronnie Duffey said he too is worried about losing more teachers.

The county administrator clarified that he “wants this to work,” but he said he does not believe the school board has the current funding.

The school system also did not fill 10 of the 19 vacancies that were created at the end of the school year, creating $500,000 in savings.

Another $600,000 in potential savings is expected to come from a one-time retirement buyout with the Virginia Retirement System.

“I’m confident we can do this,” superintendent Dr. Mark Lineburg told supervisors and school board members.

With the current pay scale, teachers have to work with the school system for seven years before they start receiving a salary greater than a first year teacher.

The two boards also met to address the high school, but at the beginning of the meeting, supervisors amended the agenda to remove any decision making from their board.

Before the agenda was approved, ED-5 supervisor Dean Throckmorton asked to “remove item E.” Item E was board of supervisors decisions including set the budget for school capital projects and direct staff to begin the process to secure the funding.

“I’d like to remove item E from the agenda until the full board has a chance to digest everything here tonight, all the information, financials. They haven’t been privy to everything the joint committee has,” said Throckmorton, before making a motion to remove the item. Vice chairman Garland Ricketts seconded the motion.

ED-2 supervisor Jeff Francisco said he came to the meeting prepared to make a motion and “put this to bed,” but noted that other supervisors felt they shouldn’t. He said he would hope the finance committee meeting would meet before their Dec. 6 meeting and come prepared to vote then.

“The school board needs to know our plan well before Jan. 1,” said Francisco.

The two boards then heard a presentation from Ted Cole, senior vice president and manager of public finance with Danvenport, and Ben Wilson from Davenport.

The county, Cole said, currently has $47,114,120 in existing debt with roughly $23 million of that being school debt.

Currently, roughly $4.7 million is paid each year towards the school debt, which is set to expire in 2027.

The 1% sales tax revenue that started July 2020 — following approval by voters in 2019 — which the county has been collecting since then was believed to bring in $3.3 million.

Wilson told the boards that they could enter into a Virginia Public School Authority loan by the spring of 2022, and the first interest payment would be due in January of 2023 with the first principal payment not due until January 2025.

The 1% sales tax, said Wilson, could cover all or a portion of the high school.

ED-8 supervisor William Bryant Claiborne said, “This puts us in a place to be in a position to get things accomplished without raising taxes.”