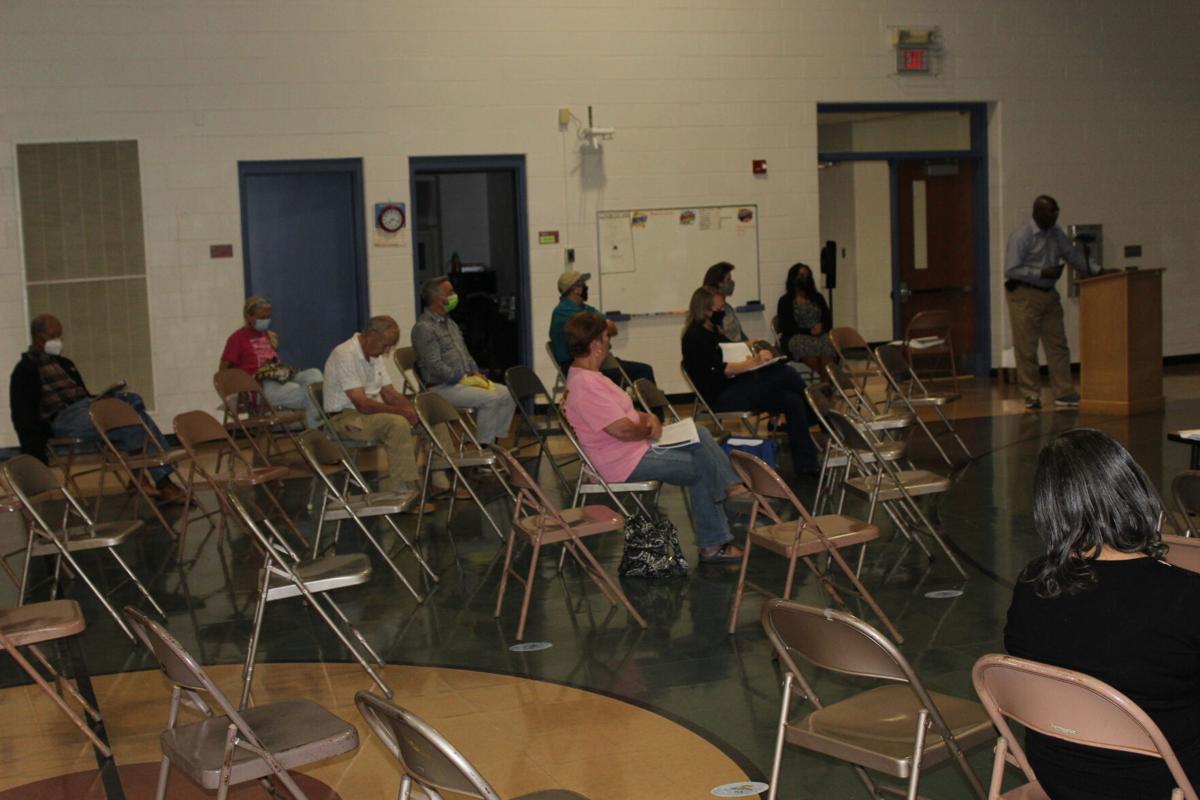 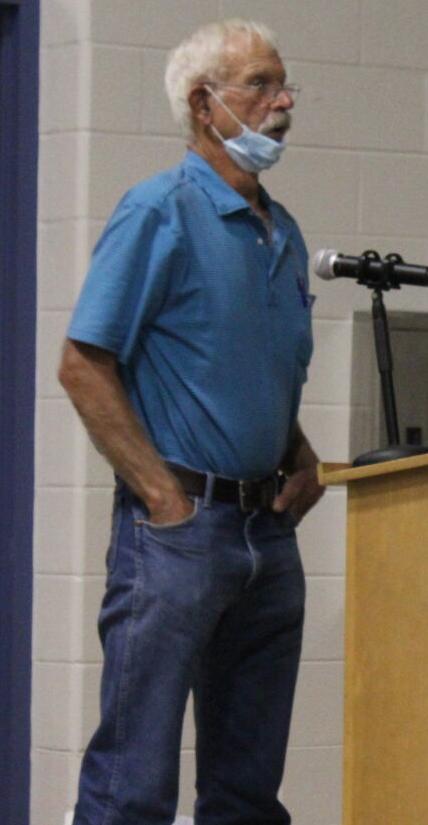 Jimmy Anderson urges the school board to consider long bus rides and suggests rezoning without consolidating at a public hearing at Scottsburg Elementary School on Thursday. 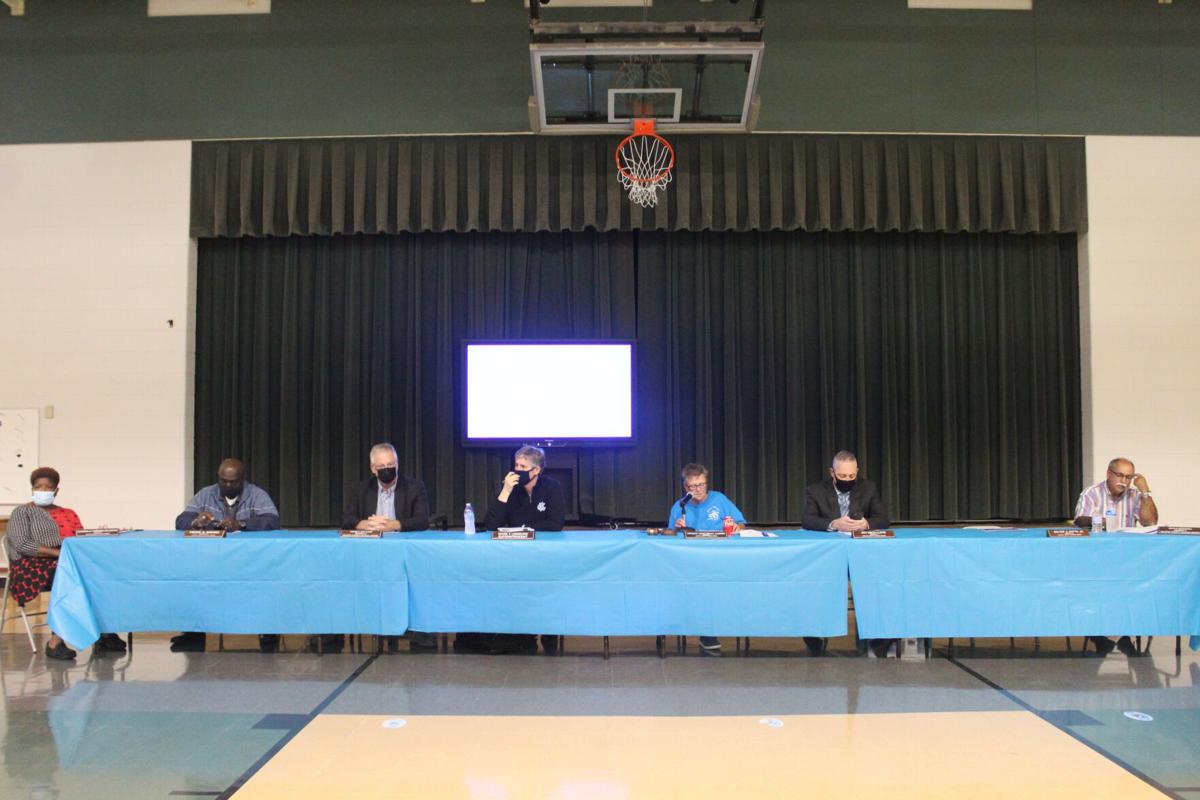 Halifax County School Board members attend a public hearing on the consolidation of elementary schools at Scottsburg Elementary School on Thursday. 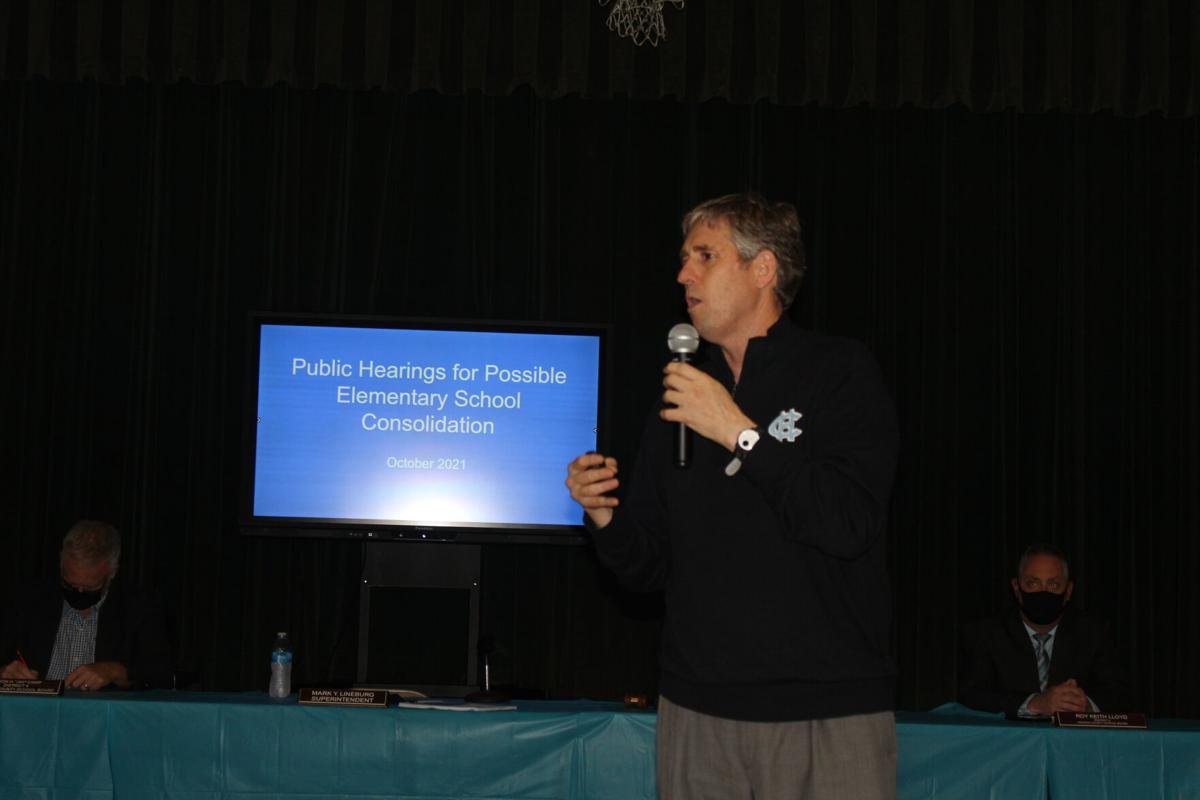 Superintendent Dr. Mark Lineburg outlines enrollment numbers, each school’s capacity and possibly savings at a public hearing on the consolidation of elementary schools at Scottsburg Elementary School on Thursday

Transportation concerns and the idea of rezoning were brought to the attention of the Halifax County School Board at a public hearing on the possible consolidation of schools at Scottsburg Elementary School on Thursday.

This was the fourth public hearing out of five where school board members and superintendent Dr. Mark Lineburg get a chance to hear questions and concerns from the public regarding possibly closing Clays Mill Elementary, Meadville Elementary and Sinai Elementary.

Lineburg was adamant about reminding the public Thursday that, “no decision has been made,” and that they are open to other solutions to addressing a declining school enrollment and an aging fleet of buildings.

About 12 people were in attendance to hear the proposals presented by Lineburg that includes the possibilities of keeping all elementary schools open, closing one, two or three.

In his presentation, he outlines utility savings and savings in personnel if they were to close schools.

Included in the more than $45 million is a gym addition to Sinai and Meadville, electrical and plumbing upgrades, HVAC upgrades, window replacement and more.

If they were to close the three elementary schools, Lineburg said it would save $2,307,500 annually in personnel savings and $262,248 in operational savings.

Also, if they were to close the three elementary schools, roughly $37 million worth of renovations would need to be completed at Sydnor Jennings and Scottsburg Elementary to accommodate students.

If they moved to only having four elementary schools, Lineburg also said services such as full time art, music, counselor, speech and hearing services would be expanded to the primary schools.

There are currently 214 students at Scottsburg, and they had 229 students last year, but Lineburg said the building could hold 538.

If they were to consolidate elementary schools, Lineburg said they would hope to increase Scottsburg’s enrollment to 450 with an average class size of 19 to 20 students per class.

Following the superintendent’s presentation, Rev. Alfred Chandler asked Lineburg and the school board, “how would transportation of students be impacted with consolidation?”

He also asked redistricting and how they would determine which schools would remain open and which students would attend where.

Jimmy Anderson also had concerns about transportation and reminded the board that the county is the third largest in the state.

“If you have four schools, someone is going to have to ride a bus a long ways,” he said.

He also suggested rezoning to spread the population to some of the smaller schools.

“I didn’t vote for the sales tax to close elementary schools. It was advertised as a capital improvement fund for all of the schools. Now it appears the only option is to close schools or raise property taxes as much as eight cents,” said Anderson.

He also urged the board to reconsider building a new high school.

Also taking the podium during the public hearing was Jack Dunavant, who said as he sat inside Scottsburg Elementary, he felt compelled to speak.

He called the elementary schools “top-notch,” and pointed out that the steel beams in the school would “last forever” if the school system keeps a coat of paint on them and keeps the roof in good shape.

“These walls don’t decay. They will be here forever,” said Dunavant. “We’re blessed with these facilities. We need to find uses for them, good uses. I take pride in coming to see this building. I take pride in all the buildings we got… I hope that we can find a way to come together to save what we got.”

He also urged the board to think of the long bus rides children would take if they were to consolidate schools and suggested shifting some of the older grades back to the elementary schools.

ED-8 trustee Walter Potts was absent from the public hearing.