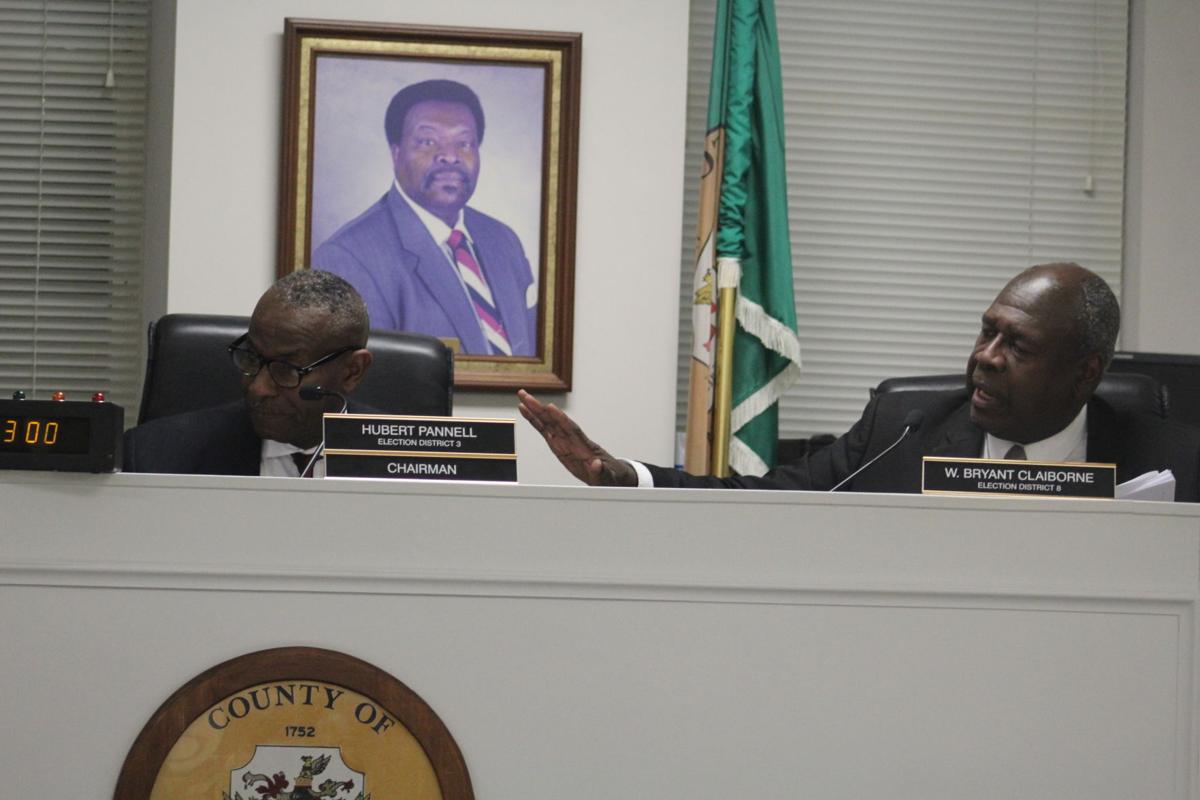 Chairman Hubert Pannell and ED-8 supervisor William Bryant Claiborne share a heated exchange during a special called meeting of the Halifax County Board of Supervisors Wednesday evening for clarification of chairman. 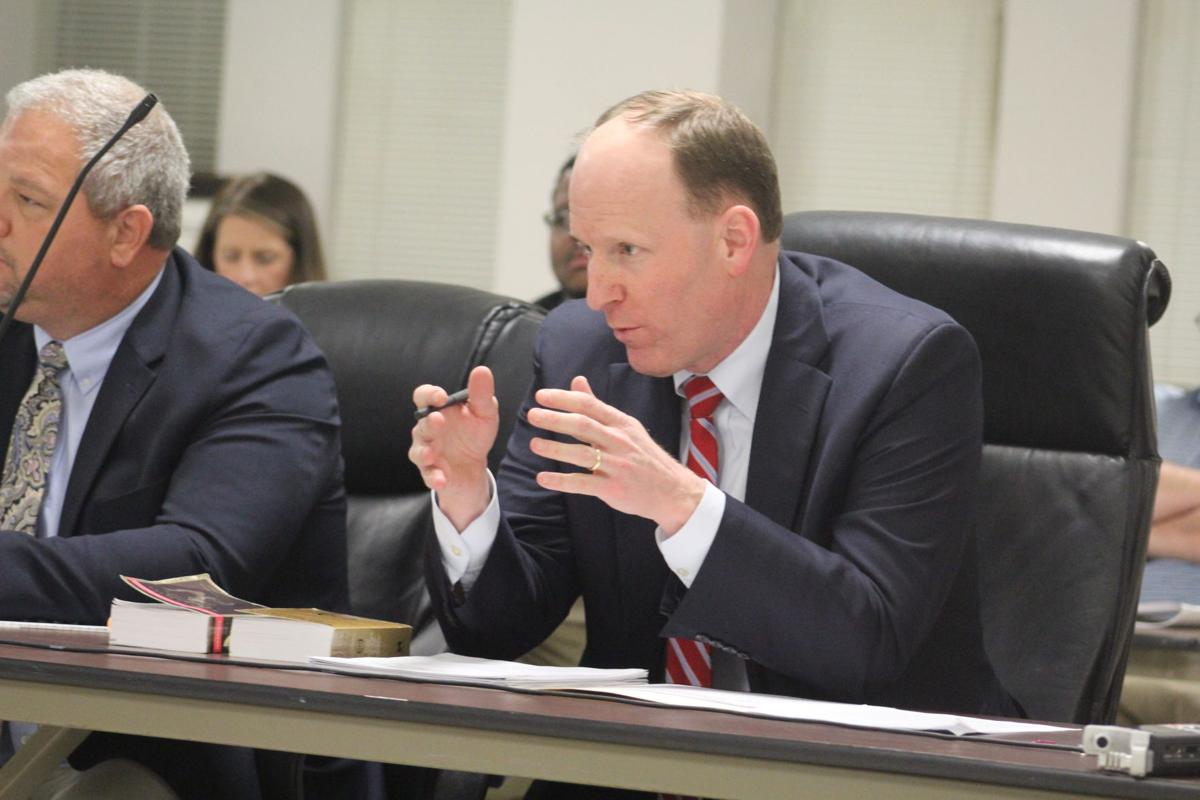 County attorney Jeremy Carroll tells supervisors the clarification of chairman comes down methodology, and that Robert’s Rules of Order allowed for county administrator Scott Simpson to choose his own methodology. 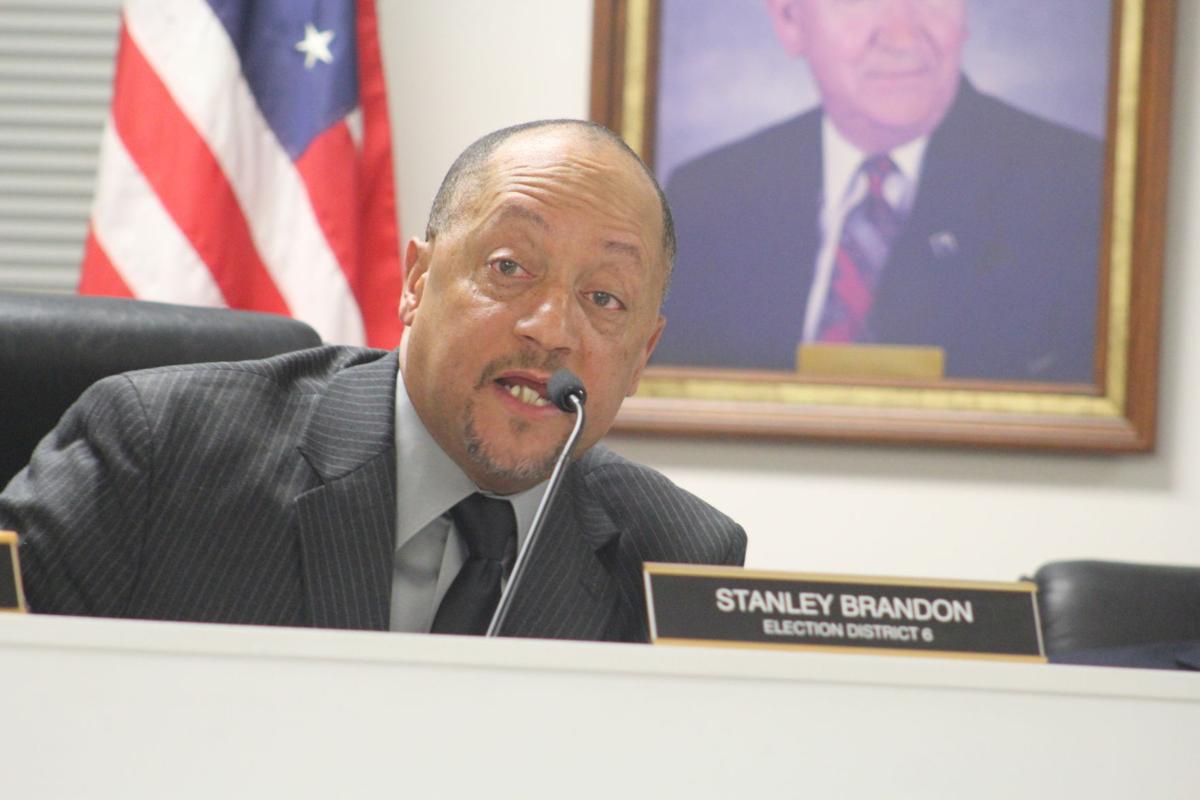 ED-6 supervisor Stanley Brandon pleads to the board to allow due process to occur after he outlined Roberts Rules of Order.

Chairman Hubert Pannell and ED-8 supervisor William Bryant Claiborne share a heated exchange during a special called meeting of the Halifax County Board of Supervisors Wednesday evening for clarification of chairman.

County attorney Jeremy Carroll tells supervisors the clarification of chairman comes down methodology, and that Robert’s Rules of Order allowed for county administrator Scott Simpson to choose his own methodology.

ED-6 supervisor Stanley Brandon pleads to the board to allow due process to occur after he outlined Roberts Rules of Order.

ED-6 supervisor Stanley Brandon first questioned the results of the election of chairman the Tuesday after the Jan. 6 monthly meeting, and he quickly objected to the first action of Wednesday’s meeting — an attempt from Pannell to receive the invocation.

“I object,” said Brandon. “With respect to the oath that I have taken to uphold the bylaws, rules and procedures of this board, I call point of order to the appropriate chairman according to Robert’s Rules of Order, William Claiborne.

“For Mr. Supervisor Pannell to continue to conduct this meeting and any other meeting thereafter, would constitute a continuing breach of the law, rules and procedures as stated in our adopted Roberts Rules of Order,” he continued.

Chairman Pannell noted his objection, but said the board was going to proceed. Following the invocation, ED-8 supervisor William Bryant Claiborne attempted to request the floor, but Pannell said, “not at this time” insisting the board follow the agenda.

Claiborne continued saying he objected to the county attorney being involved in Wednesday’s meeting saying he has a “long standing conflict of interest” with the ED-8 supervisor.

In April of 2015, Carroll offered a letter of resignation after former supervisors Barry Bank and Lottie Nunn as well as Pannell and Claiborne wrote a letter to the attorney stating that their “services are no longer desired by the majority of the Halifax County Board of Supervisors.” This was after a months-long stalemate between the eight-member board to elect a chairman.

Pannell told Claiborne his objection would be noted but that they were going to continue.

After attendance was taken and a quorum noted, Claiborne once again requested the floor and proceeded to go over the events of the Jan. 6 meeting with the county administrator.

At that meeting, Simpson presided over the reorganization of the board first taking nominations, closing nominations and then taking a vote by the show of hands.

During Wednesday’s meeting, Claiborne asked Simpson who was supposed to receive votes first?

When Simpson attempted to converse with Carroll, Claiborne said, “You cannot get advice from Jeremy Carroll…”

“Overruled,” said Pannell. “Yes, he can. That’s why he’s here. He is the county attorney. We’re not going to do that tonight…”

Claiborne continued to insist, “He’s not my county attorney,” and asked Pannell to let him continue talking saying that Robert’s Rules of Order allows him to have the floor for 10 minutes once he requests the floor.

The ED-8 supervisor continued to review the series of events that occurred at the Jan. 6 meeting with Simpson, and asked who was supposed to win if the vote was cast correctly?

“It depends on what method of vote you use,” said Simpson.

Claiborne said Robert’s Rules of Order states that the first person to receive a majority of the votes cast wins. The ED-8 supervisor received three affirmative votes from himself, Brandon and ED-4 supervisor Ronnie Duffey.

He also noted that no one voted against him being chairman, and said that Robert’s Rules of Order says the person who receives the majority of the votes cast wins.

“By operation of law, who became chairman,” Claiborne asked Simpson.

The county attorney spoke up and said Simpson outlined his stance in a memorandum that was distributed to the board after Brandon offered his objections to the Jan. 6 meeting.

Claiborne responded saying, “I have the floor for 10 minutes.”

The ED-8 supervisor continued to ask who received the majority vote, and who became chairman?

“I think that’s clear in the memo,” said Simpson. “For the record, Mr. Pannell became chairman because he was declared chairman at the meeting.”

Claiborne said Simpson was incorrect and questioned his knowledge of Robert’s Rules of Order.

The county attorney said the issue comes down to methodology, and said that Robert’s Rules of Order offers a number of methods for the board to choose from.

He also said it allows the board to select its own methodology, and “that’s what Mr. Simpson applied.”

Claiborne insisted that Simpson was incorrect when he conducted the vote, and that the vote should have stopped after he received three of the three votes cast.

He went on to ask Simpson, “What was your intent when you continued the vote after by law I became chairman?”

Carroll responded saying, “If I was representing Mr. Simpson and we were in court, and I guess we are pretending we are, then I would object to that question because it is totally an improper question.”

Simpson told Claiborne, “I was looking for five votes of an eight member board as a majority of the board to elect a chairman because a chairman of the board should be represented by the majority. I don’t know that it was a mistake.”

Claiborne continued challenging Simpson’s ruling, but Pannell told him his time was up.

The ED-8 supervisor told him he could not make that ruling calling him an “illegal chairman,” and Pannell continued to tell him he was out of order.

The two continued back and forth until Mattie Cowan, who was sitting in the audience, said, “You have to stop that foolishness. If you thought he wasn’t chairman, why did you shake his hand afterwards? You are wrong. You are out of order. It’s stupid for this county to be acting like this” which drew applause from other members of the audience.

Pannell gained control of the room once again saying they could not accept comments from the public and gave the floor to ED-2 supervisor Jeff Francisco.

“Mr. Claiborne wants the public to know the three votes and that we abstained. I personally did not vote against him. I did not want to take a personal dig to go against him,” said Francisco.

He said Claiborne “keeps harping” on one sentence in a 600-plus page book.

Francisco continued saying, “Like someone told me today. It’s like someone taking one verse out of the Bible and trying to make it suit them. You have to treat this book cover to cover. You can’t take one sentence to suit you and your agenda.”

Brandon said what was happening at Wednesday’s meeting was not what he intended adding, “the request I made was that due process take place.”

He went to explain Robert’s Rules of Order saying that if there were 100 people in a room and only one person cast a vote, that 1 to 0 vote would be “legitimate and binding,” and “technically a unanimous vote.”

“We took an oath to uphold the bylaws set forth, and I caution this board… you took an oath. This board is not allowed to do what it wants,” said Brandon.

He also went on to address the timeliness of his objections. He said Robert’s Rules of Order says that if a person believes there to be a breach that a person should raise their point of order as soon as it occurs unless certain exceptions apply.

The ED-6 supervisor said when there is a continuing breach of the rules, which he believes there to be, then a point of order can almost always be raised at any time.

He continued saying Claiborne received a majority with his 3 and 0 vote, and that he has no choice but to lean on the doctrine provided.

Throckmorton asked Brandon did he know at that Jan. 6 meeting that there should have been a point of order, but Brandon said he was not certain at the time and went home to research it.

But, chairman Pannell said a point of order must be raised during the course of a meeting, and also said, “as long as I’ve been going to school, five is greater than three.”

Claiborne and Brandon continued to maintain that there was a violation of the rules, and Brandon said all he asked was for due process to occur.

“Until tonight, nothing has been done,” said Brandon.

But, Francisco said two supervisors requested that special called meeting, and proceeded to make a motion that the board confirm and ratify the results from the Jan. 6 meeting naming Pannell chairman and Ricketts vice chairman.

Brandon and Claiborne both objected to the motion with Claiborne also saying he was not going to participate in the vote and that he considered the meeting to be adjourned.

Brandon also said, “I look at this as a cover up…. Let due process come forth.”

The supervisors went forward with a roll call vote with Claiborne and Brandon offering the only no votes, and Duffey abstained.