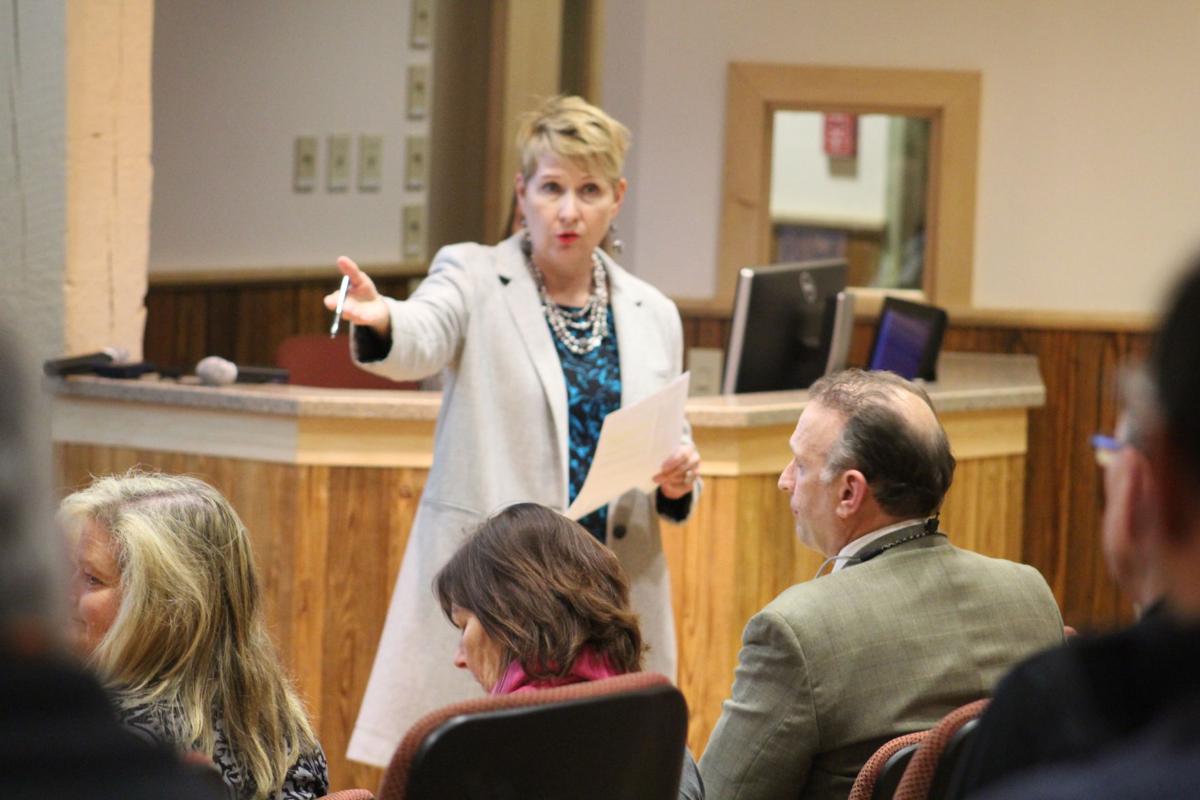 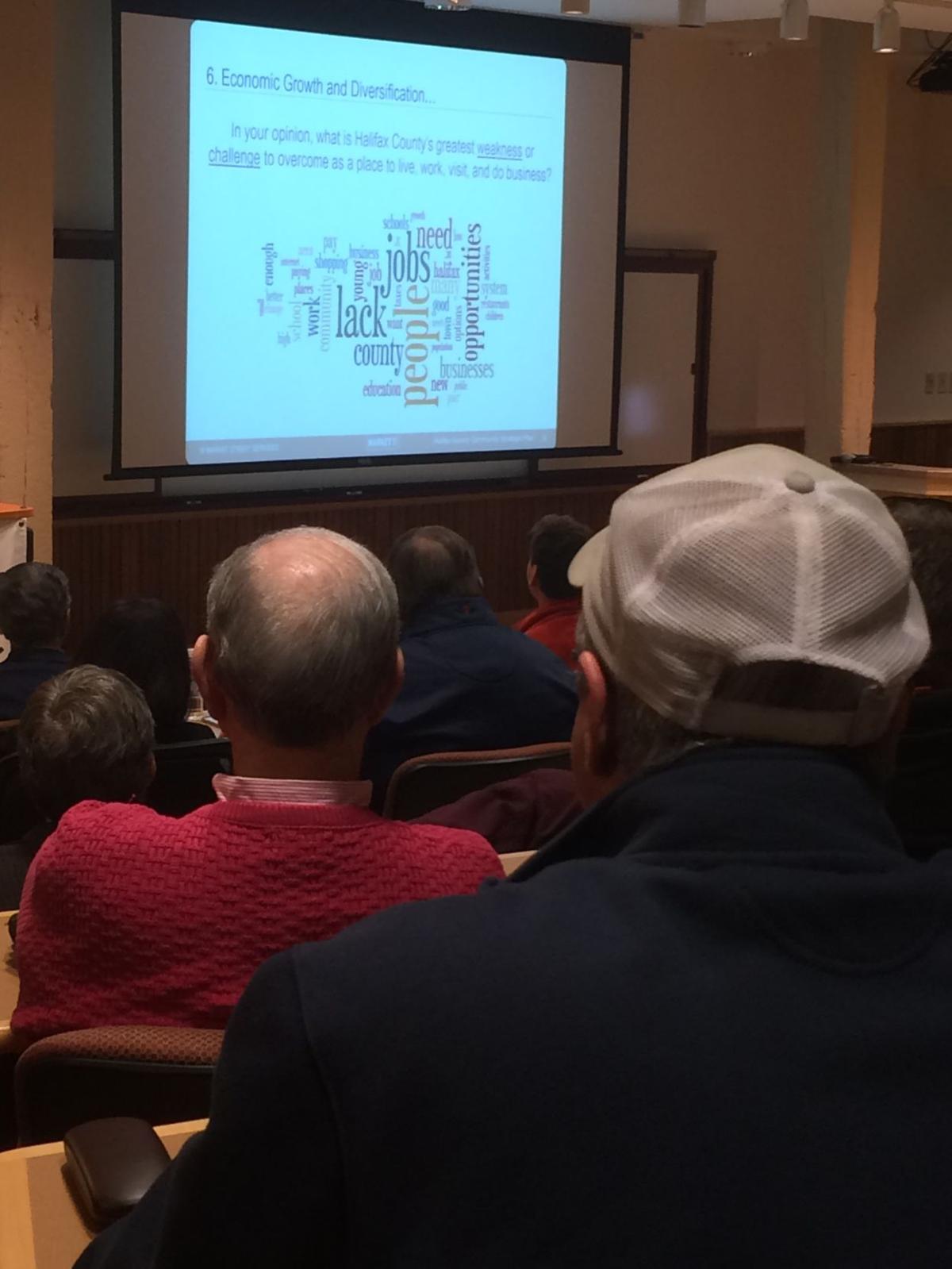 Attendees at a community meeting held Wednesday as part of the community strategic planning process read a slide displaying the results of a recent survey that takers considered Halifax County’s greatest weaknesses including items such as lack of jobs and opportunities. 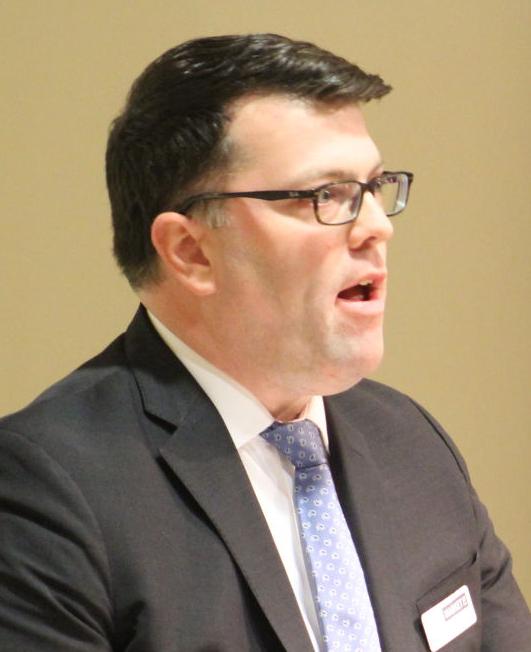 Attendees at a community meeting held Wednesday as part of the community strategic planning process read a slide displaying the results of a recent survey that takers considered Halifax County’s greatest weaknesses including items such as lack of jobs and opportunities.

With bold action, Matt DeVeau, project manager of Market Street Services, feels like anything is possible for Halifax County.

This was part of the message he delivered to the dozens who came out to the community meeting Wednesday afternoon at the Southern Virginia Higher Education Center Innovation Center.

The chamber of commerce hired the Atlanta-based consulting firm to provide guidance to a steering committee of local leaders working on a growth strategy for the county.

The community meeting was part of a six-phase research and strategic planning process. Previously 1,579 community members participated in an online survey to reveal challenges, weaknesses and strengths of this county.

Interviews with local leaders and focus groups also were held, and DeVeau on Wednesday evening revealed some of the findings from the research.

“There have been some positive things in the past 15 years but also some negative trends that we want to reverse,” said DeVeau.

As part of the community assessment, input was received to analyzing demographic, economic, socioeconomic and quality of life data trends that help provide a narrative of the opportunities and challenges the community will face.

Those trends have led to higher rates of heart disease and cancer, he explained, adding, a “changing of tide with preferences” also has occurred.

According to a 2015 study from Urban Land Institute, half of baby boomers preferred to live in rural areas, but only 32 percent of millennials, or those 18 to 36, have that same preference.

As population in rural areas has declined, he said in Halifax County, each age group declined within the past five years except those 65 and older.

“Families, prime age workers, people with children, people expecting to have children are all moving away. That’s a concern,” said DeVeau.

But many ways are available to deal with that such as focusing on “talent retention, better retaining existing residents, trying to keep people attached to a community. You can also take advantage of the mobility of individuals in that a lot of people when they move tend to size-up,” said DeVeau. “But overall what we see are some concerning numbers off the back.”

A total of two-thirds also disagreed or strongly disagreed that the school facilities are modern and competitive.

While DeVeau said graduation rates are improving, and test scores are competitive with the state average, he said the number of students attending a two-year or four-year college is declining.

He also said everyone they talked to agreed something needed to be done about the physical appearance of Halifax County High School.

“Our two cents is this — poor perceptions about a school facility can really be a tough blow for a community like this especially one that’s facing population decline. A lack of curb appeal or perceived quality of public education, even if that’s not necessarily true, those perceptions can still be a reality in the minds of those who want to live here and companies who want to do businesses here. This is really an area where you can’t afford to not take action,” said DeVeau.

Success stories emerging from the community assessment survey included buildings such as the Southern Virginia Higher Education Center and its Innovation Center and The Prizery.

“These are really tremendous assets and testaments of what could happen here when people come together, take on the hard challenges, put in the work, put in the resources and make it happen. You should be very proud of that,” said DeVeau.

Particularly with the higher education center, he said that has proven to have a large return on investment with 15.8 percent of residents 25 and older obtaining at least a bachelor’s degree between 2011 and 2016, which is higher than the national average.

Other positives from their research show that “incomes in this community are rising faster than inflation,” and wages are growing as well meaning that residents had more “purchasing power in 2016 than they did 10 years prior.”

However, some of this income is derived from government benefits, mostly Social Security and Medicare/Medicaid.

The greatest weakness or challenge of the county is the need for high quality jobs, according to the survey.

And while the community tries to find its niche after no longer focusing on incomes from tobacco, textile and furniture jobs, DeVeau said the manufacturing sector has stabilized and actually added some jobs.

One key element to the area DeVeau said is a promising opportunity for economic growth is motorsports.

“You all should look to move beyond just merely only hosting motorsports events at VIR and South Boston Speedway and move to cultivate more of a motorsports industry,” said DeVeau.

He also said areas with high level of community attachments tend to have more social offerings and openness and ability for all types of people to thrive and build networks.

A lot of survey takers said they would like more places to shop, dine and socialize, had aesthetic concerns such as litter, and they wanted more housing opportunities, rural broadband and public transportation.

Now that the community assessment has been completed, DeVeau said the next step is to form a community strategic plan, and the steering committee met Thursday morning to start on the plan to dictate where the community wants to go.

Then it’s all about action and cooperation.