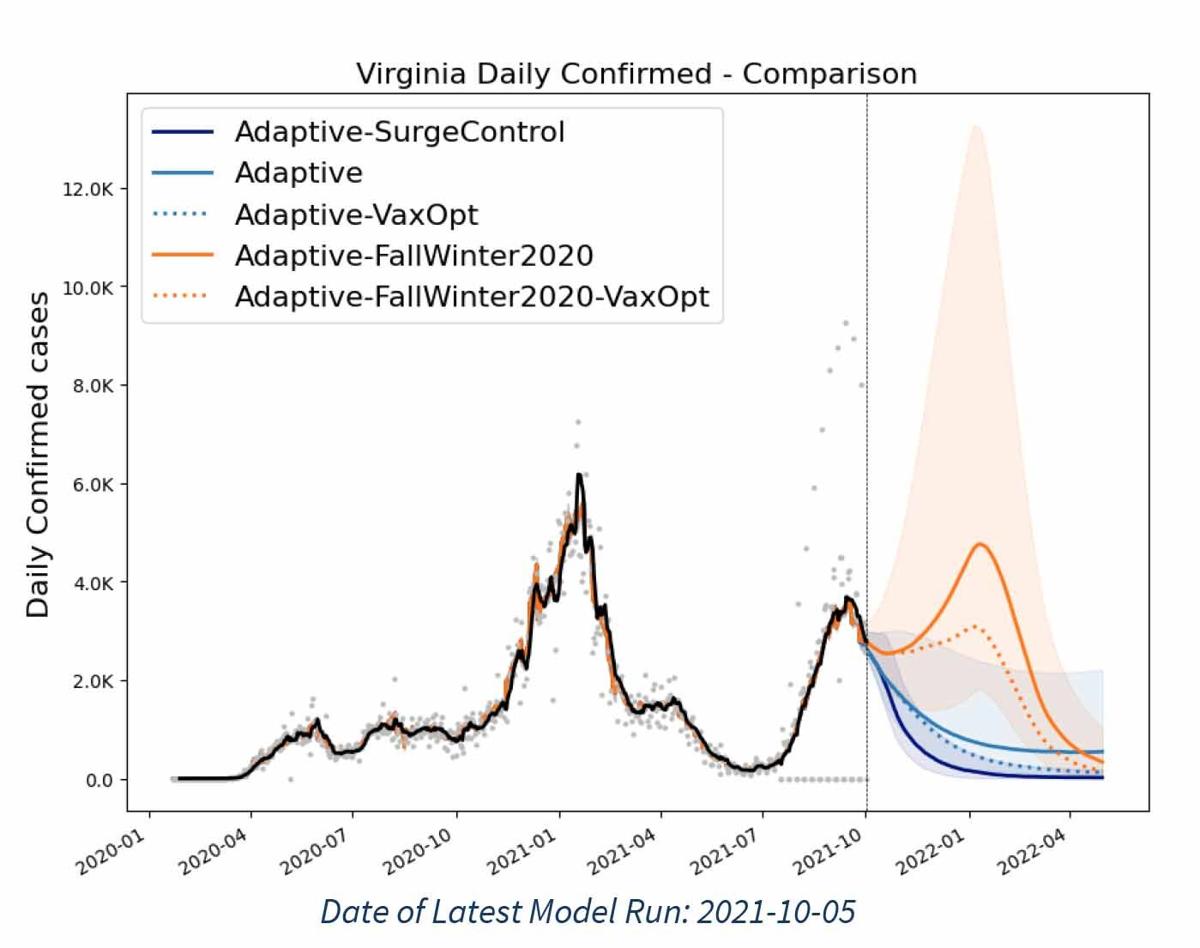 Three out of five models project the downward trend will continue for a few months. But two models show holiday travel could force numbers back upward.

Halifax County is one of the few areas around Virginia not experiencing a retreat of COVID-19 cases.

Instead, infections have remained steady over the last week.

The Southside Health District — the area that includes Halifax, Mecklenburg and Brunswick counties — is officially in a plateau trajectory, according to Friday’s report by the University of Virginia’s Biocomplexity Institute.

A plateau simply means case levels have settled and aren’t increasing or decreasing. However, the majority of health districts in Virginia are finally seeing dropping caseloads from COVID-19, indicating what UVa officials term as tempered optimism, meaning the worse of the pandemic’s fourth wave has passed.

The neighboring Pittsylvania-Danville Health District is an outlier in the state with cases climbing recently.

“We may have made it over the crest of the delta wave, but we still have a long way to go,” researchers wrote in Friday’s report. “Hospitalizations and deaths typically lag reported cases, and we may still see small increases in both in the next few weeks.”

Even amid the drop in caseloads, the rates are still high, and the risk of infection remains “significant,” the UVa report said.

All areas of Southern Virginia remain locked in the highest risk category for COVID-19 spread, according to the Centers for Disease Control and Prevention. Only a few localities in the commonwealth are in the next stage down, what’s known as significant. In both categories, the federal agency recommends everyone wear face masks while in indoor public spaces.

Halifax County is currently averaging about 18 new COVID-19 cases per day. That’s the highest level since early February. The positivity rate — a calculation of the positive results against the overall tests administrated — had nudged upward to 16.5% compared to the previous seven days, the CDC reports.

At the same time, testing has dropped by nearly 35% over the last week in Halifax County.

Positive signs in the state

UVa expects cases in the Southside Health District to start to decline in about a week, joining the rest of the state.

“We are happy to report some good news this week,” researchers said Friday.

It marked the first time since June 30 that no state health district was in a surge. Instead, most — 31 of 35 — are seeing a drop in cases.

Three out of five models project the downward trend will continue for a few months.

“These findings are cause for celebration, but we are not out of the woods yet,” the experts at UVa quickly cautioned.

In addition, cases and hospitalizations are still high, especially in areas like Southwest Virginia where hospitals are nearing capacity.

“With the news of declining case rates, it is important to remember that at this very moment we are still in a period of high transmission, and we should not relax our guard just yet,” researchers said.

Sentra Halifax Regional Hospital is reporting a dozen patients — representing 29% of inpatients — being treated for COVID-19. That is a slight drop from the average of 15 patients in mid-September.

Halifax County Public Schools’ COVID-19 dashboard indicates 27 new COVID-19 cases surfaced last week. It’s not clear how many of those were students or employees. Overall, since classes started in late August, 124 infections have been reported. The majority of cases have been identified at secondary schools, Halifax County Middle School and Halifax County High School with 29 and 30 cases, respectively.

Natural immunity, according to UVa, is acquired by clearing an active infection, and there is some evidence that it may be as protective against COVID-19 as vaccination.

So the question arises: Why are health departments and the CDC advocating vaccinating anyone who is eligible, if natural immunity is just as good? The report explains a myriad of reasons: