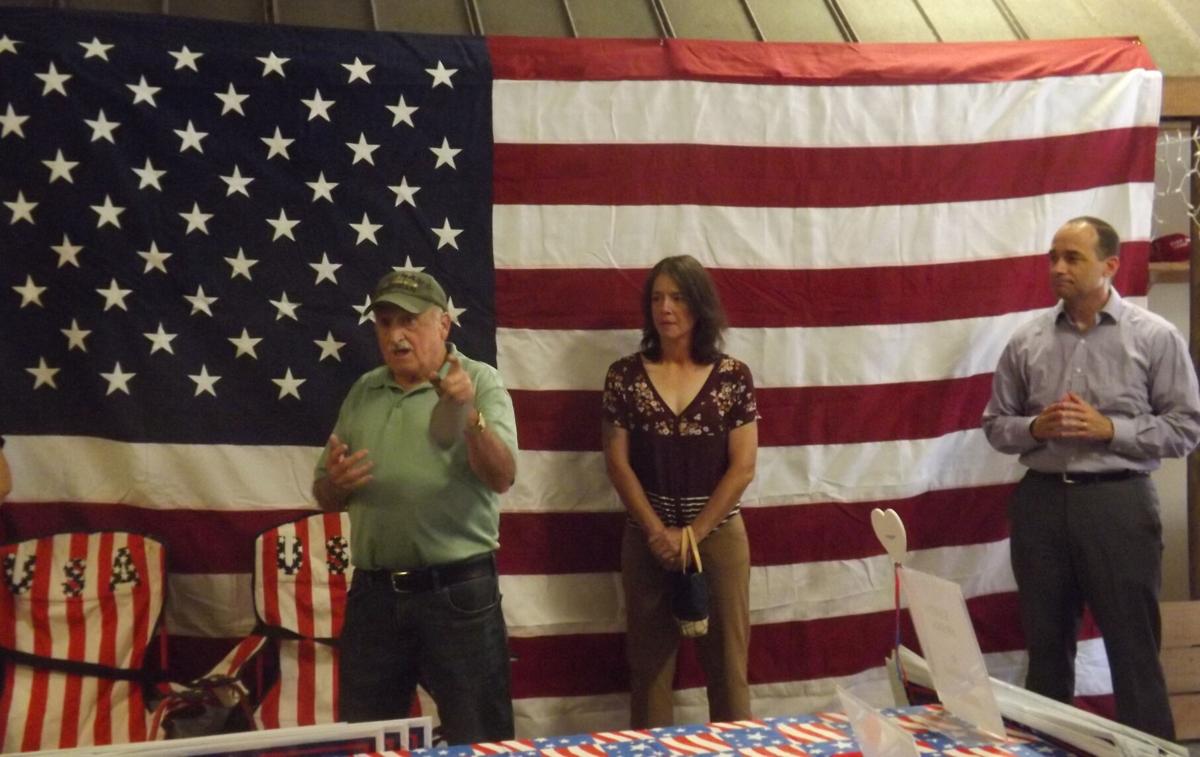 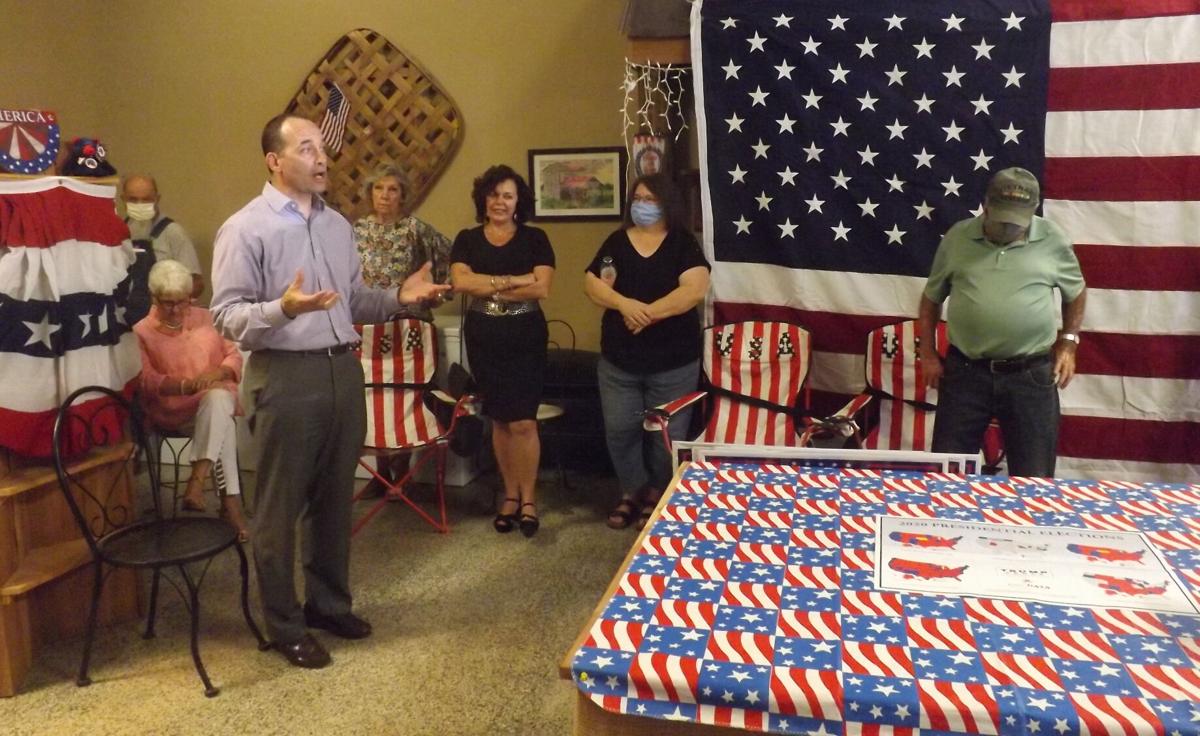 Bob Good, the Republican candidate for Virginia’s 5th Congressional district in the November election, speaks about the importance of the upcoming election at a Halifax County Republican Committee event in the committee’s headquarters in downtown Halifax on Thursday afternoon. 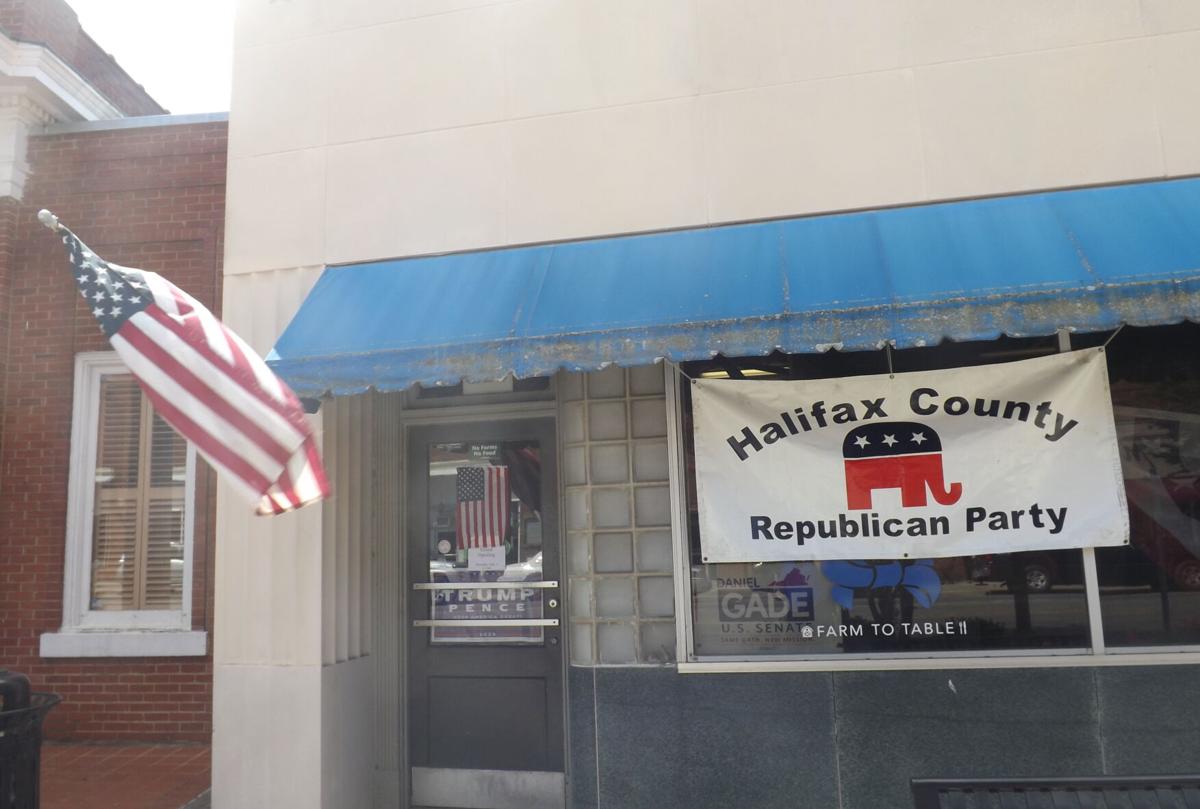 The former Blue Ribbon Market at 60 S. Main St. in Halifax serves as the headquarters for the Halifax County Republican Committee.

Bob Good, the Republican candidate for Virginia’s 5th Congressional district in the November election, speaks about the importance of the upcoming election at a Halifax County Republican Committee event in the committee’s headquarters in downtown Halifax on Thursday afternoon.

The former Blue Ribbon Market at 60 S. Main St. in Halifax serves as the headquarters for the Halifax County Republican Committee.

The Halifax County Republican Committee rallied for the November election in its headquarters Thursday afternoon at the former Blue Ribbon Market at 60 S. Main St. in Halifax.

An American flag flew from the flagpole, and a red, white and blue sign with the trademark Republican elephant on it greeted Republican Committee members as they entered the building.

Bob Good, the Republican Congressional candidate for Virginia’s 5th District which includes Halifax County, talked with committee members about the importance of the upcoming election at the event.

Good defeated current Congressman Denver Riggleman in the Republican primary and is running against Democratic candidate Dr. Cameron Webb in the general election.

“You cannot overstate the importance of this election,” Good said, adding, “We’re really at a crossroads as a country where we’re going to go with this election, both on the presidential level, retaining the Senate –the majority that we have there – and also taking back the House. We’ve got to take back the House and make sure Nancy Pelosi is not the Speaker.”

Good also thanked Halifax County Republican Committee chairman Jimmy Wade for his Party leadership on the “grassroots” level, adding it is the efforts of grassroots organizers such as the ones at Thursday’s event that keep the party going strong.

He expressed his excitement about Republican headquarters such as the one in downtown Halifax opening up throughout the Congressional 5th District ahead of the November election.

The Congressional candidate expressed his confidence in a win at the polls in November, noting the 5th District is a “Republican majority district.”

Delegate James Edmunds was not able to attend Thursday’s event, but his legislative aide Dana Nichols spoke on his behalf. Like Good, Edmunds also emphasized the importance of voting in the November election.

“I can tell you that if we are not successful in November, especially the presidential election, the values that we hold will be in serious jeopardy, and our children and grandchildren will not know the same country that we grew up in,” Nichols read, on Edmunds’ behalf. “So this year, give it your all, and challenge your friends who are upset but only complain to come out and help. Let’s not leave anything on the table.”

Nichols also shared with those gathered at the Republican Party headquarters the police reform bills that had been passed Thursday while Edmunds was in the legislative session.

One of those bills calls for the prohibition of “no-knock search warrants” by police officers.

Another bill bans police searches based on a police officer’s assertion that he/she smells marijuana, as well as stopping a vehicle for several minor traffic violations including having tinted windows and expired inspection stickers. Edmunds voted “No” on both of the bills.

At Thursday’s event, Good also shared his stance on topics including healthcare, public safety and Second Amendment rights, in contrast to his opponent, Webb’s stance.

“My opponent supports the gun restrictions that have been passed in America,” Good said. “Second Amendment rights are a check against tyranny; they’re to ensure we remain a free people.”

“Most Americans recognize that the majority of our police officers need more support. That’s why we’re doing Back the Blue initiatives,” Good commented.

Good also pointed out the difference between Democratic presidential candidate Joe Biden’s proposed universal healthcare plan for Americans and his stance that healthcare should be privatized.

“Most Americans actually like their healthcare. We have the best in the world,” Good said. “If we have single-payer, total government-controlled health care, the cost will go way up, and the quality will go way down.”

Good encouraged all the members of the Republican Committee to vote early, in person, on Sept. 18, which will free them up to volunteer at the polls in November.

After Good spoke and Nichols spoke on Edmunds’ behalf, a couple of committee members commented on ways they could impact voter turnout and results in Halifax County in the November election.

“How can we as a party engage our younger voters?” asked Courtney Thomasson. She plans to call church youth groups and try to get them active in the Republican Party.

Allen Briley agreed with Thomasson on the importance of talking with young people about the Republican Party’s message.

“We have to go into the churches,” Briley said. “If you set an example in what you do, the children will look at that. Set an example as a person, but bring it (politics) up.”

Good said getting younger people to become active members of the Republican Party is a challenge nationally.

“It is a challenge, no question…They come out of that college indoctrination believing free-market capitalism is bad,” Good said.

On the other hand, Good noted many young people are pro-life, one of the beliefs upheld by the Republican Party, and he believes “the Republican message, the things we believe in, can appeal to all backgrounds.”

Wade commented he is “way more optimistic” about some of the younger people in the county becoming members of the Republican Party than he is in the older people who have already made up their minds regarding political affiliation.

Another Republican Committee member, Polly Fraser, voiced her thoughts on the importance of recruiting minorities to join the Republican Party.

“We need to hit the minorities, because the majority of them are Democrats. We need to make sure that we go across the board,” Fraser said.

Good shared that recruiting minorities to join the Republican Party also has been a challenge but something that he has made a priority.

“We’ve been intentional in reaching out to churches in the minority community,” Good said.