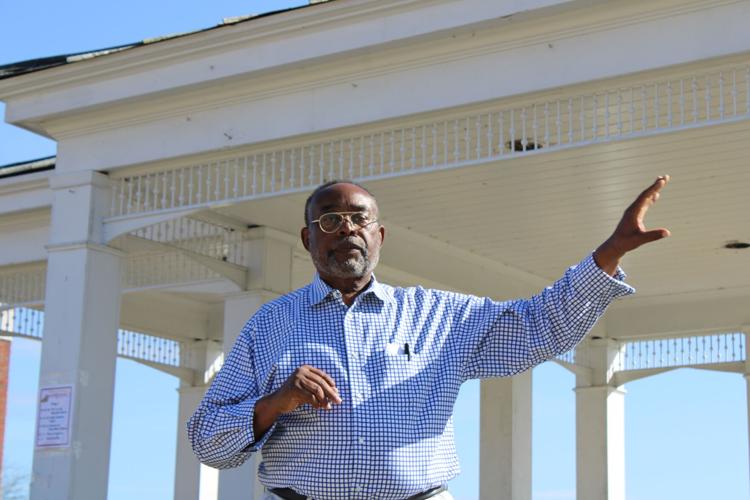 Detra Carr announces his write-in candidacy for the Halifax County Board of Supervisors tie-breaker position Friday. 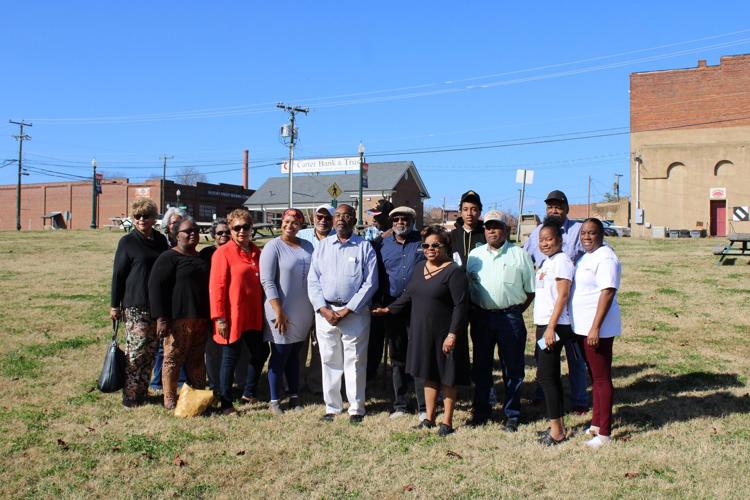 Detra Carr poses with supporters after announcing his write-in candidacy Friday for the tie-breaker position on the Halifax County Board of Supervisors.

Former NAACP president and community leader Detra Carr declared his write-in candidacy for the tie-breaker seat on the Halifax County Board of Supervisors before a crowd of supporters Friday at Constitution Square afternoon.

“More than anything I was being prayerful,” Carr stated, explaining his process of deciding to pursue his late-stage candidacy.

Supporter Deelynn Leigh was one of the speakers who introduced Carr.

“He’s a visionary leader who is dedicated and committed to making Halifax County more accessible and inviting greater business interests,” she stated.

“He’s focused on economic development, your education and your public safety,” she declared, noting his extensive knowledge of the issues and personal initiative to attend public meetings to stay engaged in local governance.

Carr is running against Wayne Smith — current holder of the position after an appointment — who is the only candidate on the ballot.

The tie-breaker position was formed in March of 2015 after an impasse of the even-numbered board that January.

“What I say is what I mean, and I don’t want to change it, because a man’s word — as people used to say — is the bond,” he stated in reference to his emphasis on morals.

“My stand on education is that no child get left behind,” he stated, noting that he makes no distinction based on the class or racial background of the given child.

“We have about 7,500 people driving out of Halifax County into other areas” for economic opportunities he indicated, explain his emphasis for economic development.

Carr called for more jobs and better-paying employment opportunities within the county.

In regard to public safety, Carr noted that need for more coordination between police, emergency services workers and dispatchers.

He highlighted Virgilina and Clover as communities in need of more support as far as emergency services, including more rescue vehicles for faster response times.

“Now, I want you to keep in mind that the only time that I’m going to actually have a vote is when they have a tie,” Carr explained. He noted, however, that he will use his position to influence other board members to do the right thing, serving as an advocate for community needs.

“I need to ask all of you to continue to work hard like you’ve been working,” Carr stated, noting that he had only four more days to spread the word of his write-in candidacy.

Carr informed the audience that although many have already voted, several of these individuals wrote him in.

Carr noted that individuals across the county will be able to vote for him as tie-breaker, no matter what election district the individual may live in.

“I do love my county; I love the people who live here,” he expressed, noting his leadership positions and community involvement.

Carr notes that he regularly attends board of supervisors meetings, school board meetings and strategic planning community meetings.

He currently serves on the CARES Act board, which will distribute a half-million dollars to local nonprofits.

Sean Barker is a staff writer for The Gazette-Virginian. Contact him at sbarker@gazettevirginian.com.

Sean Barker is a staff writer for The Gazette-Virginian. Contact him at sbarker@gazettevirginian.com.