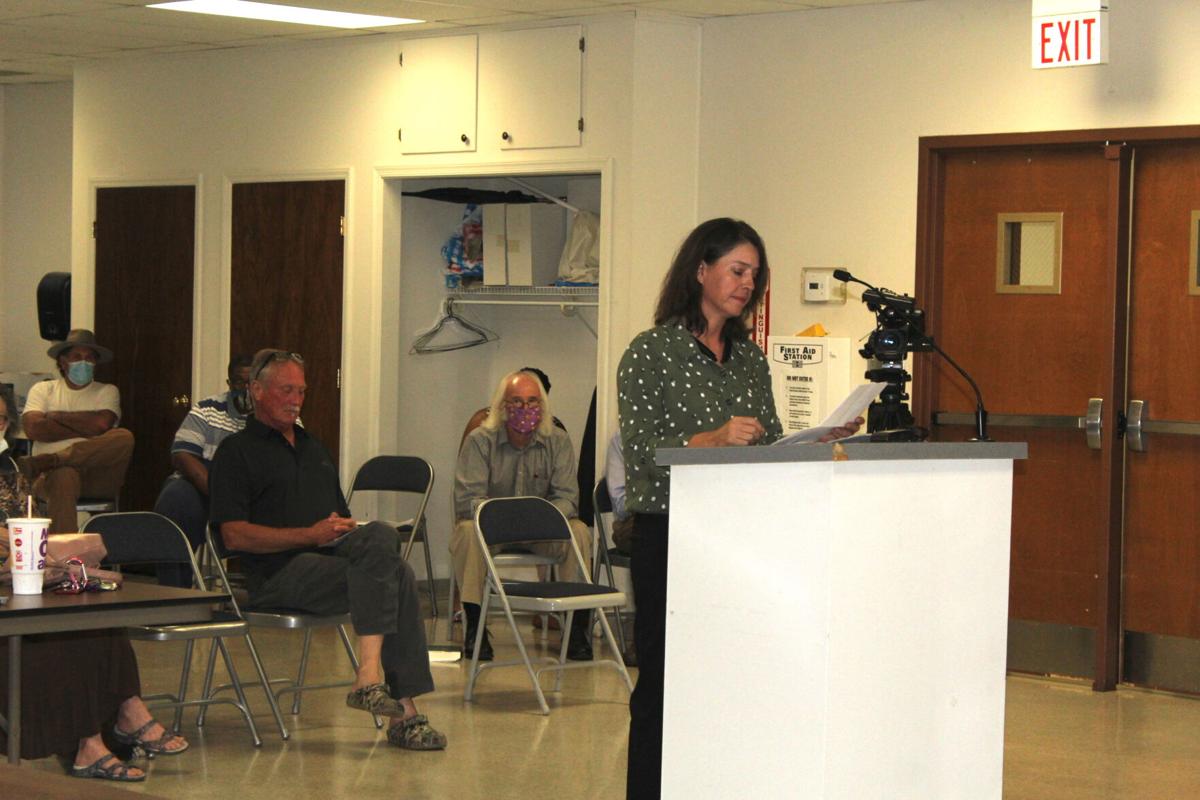 Mitzi Thompson, commander of the Halifax Militia, tells the Halifax County Board of Supervisors the militia isn’t asking for permission to form, but is asking to work with the county. 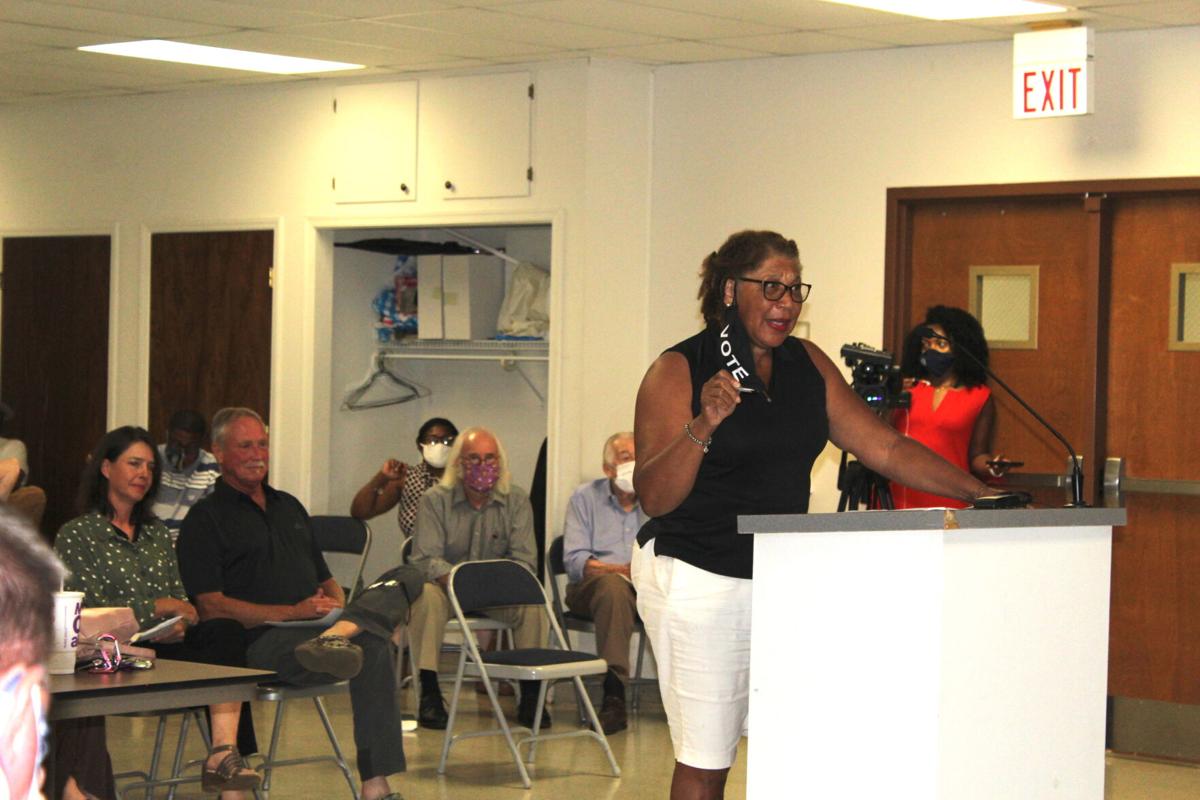 Mattie Cowan addresses the Halifax County Board of Supervisors to voice her opposition to the Halifax Militia saying the group is not needed and that the local police have never failed her. 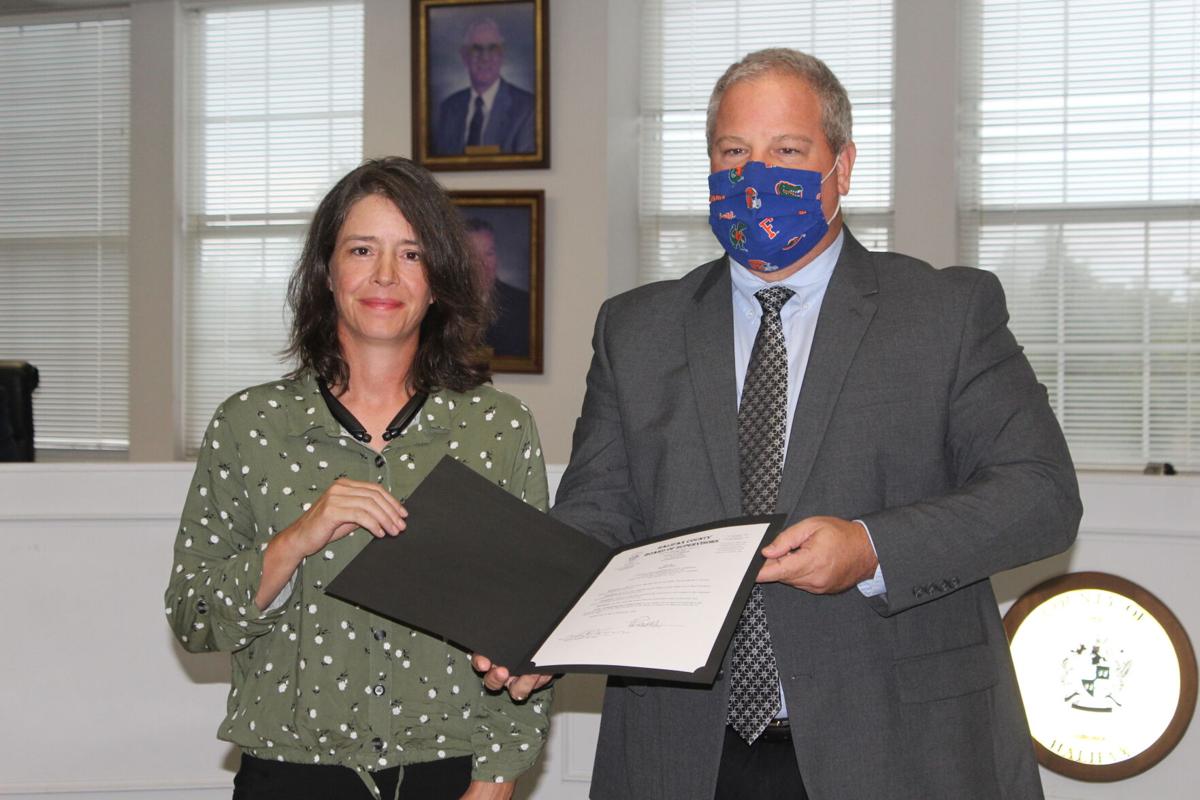 Halifax County Administrator Scott Simpson presents a resolution to Mitzi Thompson, commander of the Halifax Militia, commending her for organizing a Back the Blue Rally on Aug. 23 in Halifax when supervisors met Tuesday night. The rally supported law enforcement, Second Amendment rights and the fight against legislation that would curtail the actions of police. Another resolution considered by the board to recognize the Halifax Militia was tabled.

Mitzi Thompson, commander of the Halifax Militia, tells the Halifax County Board of Supervisors the militia isn’t asking for permission to form, but is asking to work with the county.

Mattie Cowan addresses the Halifax County Board of Supervisors to voice her opposition to the Halifax Militia saying the group is not needed and that the local police have never failed her.

Halifax County Administrator Scott Simpson presents a resolution to Mitzi Thompson, commander of the Halifax Militia, commending her for organizing a Back the Blue Rally on Aug. 23 in Halifax when supervisors met Tuesday night. The rally supported law enforcement, Second Amendment rights and the fight against legislation that would curtail the actions of police. Another resolution considered by the board to recognize the Halifax Militia was tabled.

With many questions left unanswered, and the leader of the Halifax Militia unable to take the floor, Halifax County Board of Supervisors put off adopting a resolution for the group by tabling the matter.

Mitzi Thompson, commander of the group and a former military officer, attempted multiple times to respond to supervisors’ questions, but members of the board insisted that the board’s bylaws and procedures did not grant her the ability to address the board during that portion of the meeting.

Being left wanting to know several factors such as their limits, duties, number of members and more, supervisors agreed to table the matter until they knew more.

Thompson did eventually address the board at the podium, but it was during citizen comments and after the board had already agreed to table the matter.

“We’re not asking for your permission to be a militia. What we’re actually asking to do is work with you as the militia so that you have input,” said Thompson.

The militia has already been formed, and she said they have permission to do so through the Constitution of America and the Virginia Constitution.

“No decision you make today will change that fact,” she added.

Virginia Code 44-1 states the militia of Virginia “of all able-bodied residents of the Commonwealth,” must be at least 16 and no more than 55.

“The militia shall be divided into three classes: the National Guard, which includes the Army National Guard and the Air National Guard; the Virginia Defense Force; and the unorganized militia,” it continues.

Thompson said the Halifax Militia is the “unorganized militia.”

Now, she said, they’re reaching out to the county government to have them help govern the militia in order to be a “well-regulated militia.”

She also pointed to the end of the proposed resolution that states that supervisors “decline to expend county resources for any effort to enforce unconstitutional laws enacted after Jan. 20, 2020 restricting ownership and use of firearms that are in common use and accessories such as magazines…”

The proposed resolution also recognizes citizens’ rights to assemble and train to arms for service individually or in groups as members of the militia.

It also supports opportunities for citizens to “assemble for recreational and civic purposes to train to arms to include, but not limited to, firearms safety training, marksmanship, first aid training and other training and activities that enhance the individuals ability to defend himself, his family, his community; and the Militia’s ability to respond effectively to a crisis.”

The proposed resolution ends states supervisors oppose all “unconstitutional restrictions on the Bill of Rights and specifically the Second Amendment.”

She continued saying, “God forbid citizens do have to stand up and defend, I kind of prefer them know how to do it properly.”

But, these comments came after supervisors had already decided to hold off on making any decision about the resolution, and before hearing from Thompson, some supervisors spoke in opposition of the resolution.

Two citizens, Mattie Cowan and Detra Carr, vice president of the NAACP, also spoke in opposition of the resolution during citizen comments.

Cowan said the local police had never failed her, and said, “I don’t need a militia.” She referenced the June 6 Black Lives Matter protest in which the Halifax Militia attended.

Members of the militia attended the rally with their rifles, and Cowan called their actions intimidating – which prompted snickering from the audience, and Cowan turned to address the audience.

Chairman Hubert Pannell then gained order of the room and told the crowd they were to respect everyone speaking at the podium or he would have police escort them out.

Carr told supervisors they were treading in unwanted territory, and that the county is more divided now than he’s ever seen it. He also said he relied and trusted calling 9-1-1 when he’s in trouble and calling on the National Guard.

He finished in his comments with a plea to the county to work together for progress.

Kyle Rittenhouse, a 17-year-old, was charged with shooting three people, killing two during a protest in support of Jacob Blake. According to various media reports, Rittenhouse is believed to a member of a militia.

“We don’t need a militia,” Claiborne argued. He believes siding with a militia is “dangerous,” would cause trouble and is too much of a liability for the county.

“This is just provoking or enhancing civil unrest,” he added.

ED-6 supervisor Stanley Brandon recognized the militia’s community involvement, but said he disagreed with a paragraph in the resolution that says the county declines to expend county resources to enforce unconstitutional laws.

That paragraph continues to talk about use of “modern semiautomatic riles and pistols with certain ergonomic features…” that use magazines of more than 10 rounds.

He said supervisors have already taken an oath to do everything else she asked for in the resolution besides that paragraph.

The ED-6 supervisor also said he was weary about “giving blessings” to private militias.

Chairman Hubert Pannell also did not want to give his blessing to private militias saying they already have police officers, the National Guard and U.S. Military.

But, ED-1 supervisor Ricky Short, who requested the board consider the proposed resolution, had a different opinion.

“Wouldn’t it be nice if violence was happening that we could call on the militia to protect property and citizens from harm’s way,” he said.

When first talking about the resolution recognizing the militia, Short made a motion to approve it and ED-4 supervisor Ronnie Duffey seconded it.

Following Short’s comments, supervisor Brandon argued that was what the local authorities are for.

ED-2 supervisor Jeff Francisco noted that the militia has the right to bear arms, just as every other citizen, and he said a militia could help during an emergency.

He said the militia seems to want to help the community, and after seeing the militia host a Back the Blue Rally in August, Francisco doesn’t foresee them overtaking the police.

But, the ED-2 supervisor, along with other supervisors, wanted further clarification and more information about the militia.

Vice chairman and ED-7 supervisor Garland Ricketts then made a motion to table the matter in order to find more information about, but not limited to, their duties, limitations, extent of action and how they plan to interact with the public. Claiborne seconded the motion.

Francisco then said he believed Thompson had the right to address the board before they vote, but Brandon disagreed.

With that Chairman Pannell gained order and proceeded with the vote. The motion to table the matter passed unanimously.

At the end of the meeting, Francisco said he was “troubled” by the board not allowing Thompson to speak before the vote.

County administrator Scott Simpson suggested they could review the board’s bylaws and procedures.