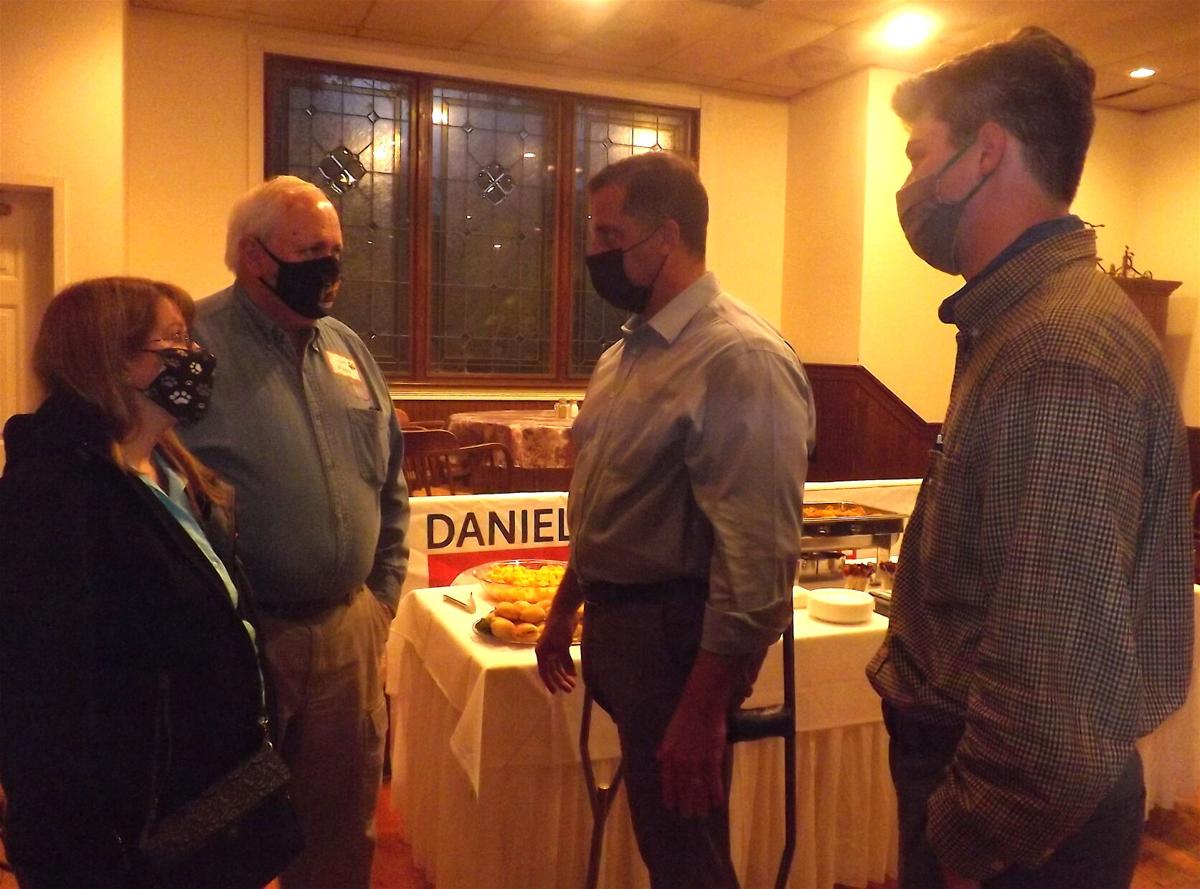 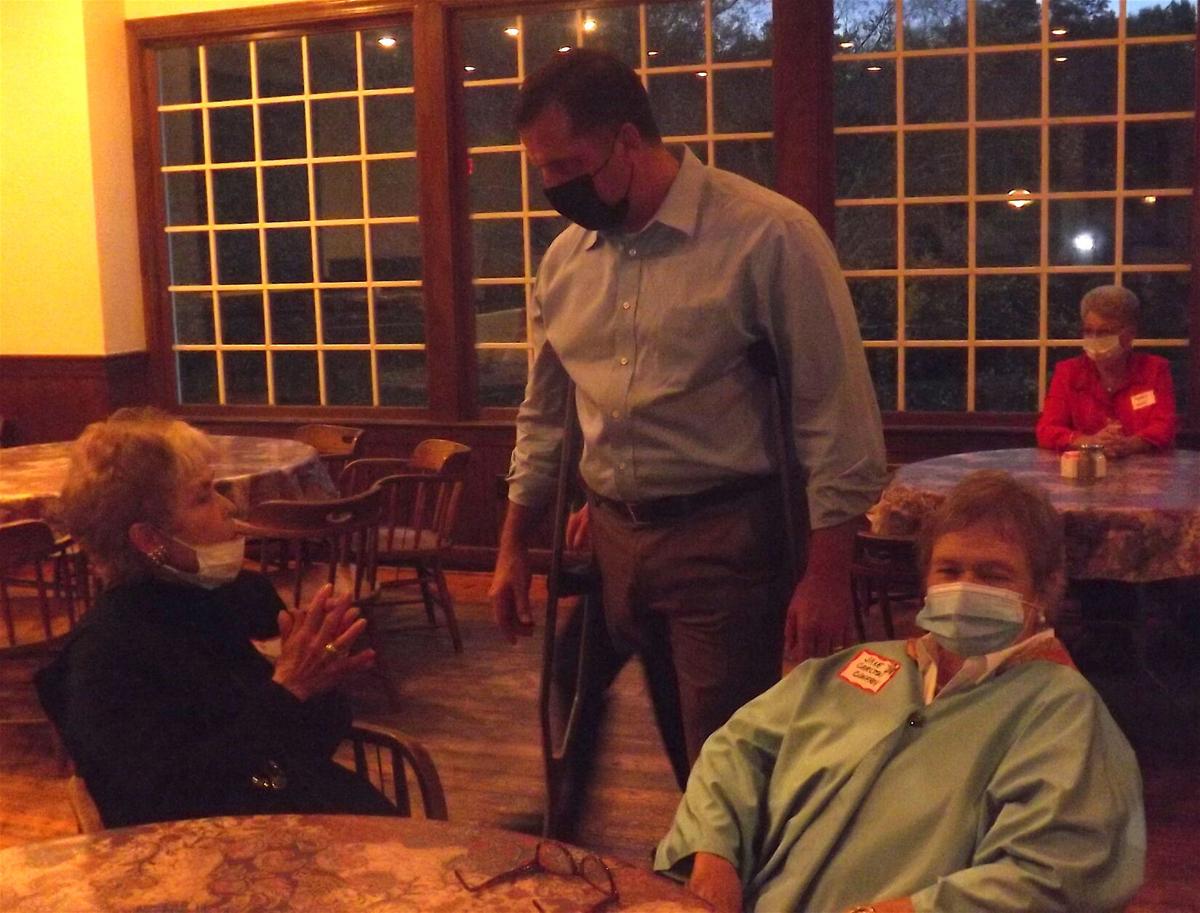 U.S. Senate candidate Daniel Gade (R) spent Friday evening at Ernie’s restaurant in South Boston, meeting with voters and sharing the story of his journey from serving his country in the military to running for political office.

“This year, people have a chance to elect a career servant rather than a career politician,” said Gade, of his run against incumbent Senator Mark Warner (D).

Gade served in the U.S. Army for 25 years and was awarded two Purple Hearts. His unit deployed to Iraq for Operation Iraqi Freedom in 2004, and he sustained two combat woundings, the second resulting in the amputation of his right leg. Gade has also worked under three different presidential administrations and is a college professor with a doctorate in public administration and policy.

“In the Army, my personal goal for myself was always to fight for people who couldn’t fight for themselves, to fight to defend others and the U.S. Constitution,” Gade said. “In the Senate, my goal is the same thing – to use that high honor to benefit the people of Virginia and to serve the Constitution instead of to serve myself. If you look at Mark Warner’s career, what he has done is served his party and served himself, not served the people of Virginia.”

Gade greeted voters and answered their questions at the South Boston restaurant before giving a speech. Sixty people attended the meet-and-greet. Donna Randall of Clover shared that she was eager to meet Gade and ask him some questions on issues important to her.

“I think Gade’s the man, and I wanted to see him in person,” Randall said. “He’s a strong supporter of the Second Amendment, and he’s got the military background.”

Randall added. “We’ve got to turn this state bright red (in November).”

Jim and Mona Moody traveled from their home in Clarksville to meet Gade Friday evening.

“This is a critical election,” Jim said. “We have someone that has the right values and remembers America was built on Christianity and hard work.”

Like Gade, Jim said he is also a veteran, so veterans’ issues are important to him. Throughout his career, Gade has been an outspoken advocate of veterans’ healthcare reform.

“Everybody knows the veterans’ hospitals are too far apart, the quality is too low and the waiting lists are too high, so I propose that we take away the private health insurance that members of Congress get, and they have to go to the VA regardless of their veteran status. That would make them serious and would focus their attention on solving this problem,” Gade proposed. “Our veterans should be treated as valuable resources, not as discarded government trash.”

As a veteran of the U.S. Army with combat experience, Gade said he believes one of the core functions of the government is to protect the country, and he would like to see Congress gain back its power to make the decision for the nation to go to war.

“The decision to go to war is not one that should be made by the executive,” he said. “An executive branch-led war is a terrible mistake.”

Another issue that is important to Gade is stopping insider trading among members of Congress, and the first piece of legislation he would introduce if elected to U.S. Senate is the Stop Insider Trading Act. Gade explained that act would require all members of Congress to put all of their holdings in a blind trust and make it a felony for them to interact with their stock or fund manager. He said the purpose of that is to prevent Congressmen from benefitting from non-public information to which they have access.

Gade also shared his stance on other issues important to him, such as implementing term limits for Congress members and reducing government spending.

“Our debt and deficit is the No. 1 threat to our national security,” Gade asserted.

Gade also shared a war story with the crowd at Friday evening’s meet-and-greet illustrating one of his core beliefs, that we are all Americans first, and that every American should be judged and treated as an individual, rather than as a member of a group, or on the basis of “our sex, our race or our national origin.” Gade related that an explosion in the field had led him to lose a life-threatening amount of blood, and someone went into the mess hall and made an announcement asking for blood donations for a fellow service member. He said many people stepped up and donated blood to save his life without first asking whether he was black or white or where he was from, and that is the type of spirit he likes to see among Americans.

Gade ended the evening on an optimistic note, telling voters that while he trails Warner in the polls leading up to the Nov. 3 election, Warner’s lead in the polls has narrowed in the past month and he is confident he can still win the election. He asked the crowd members for their support in his campaign.