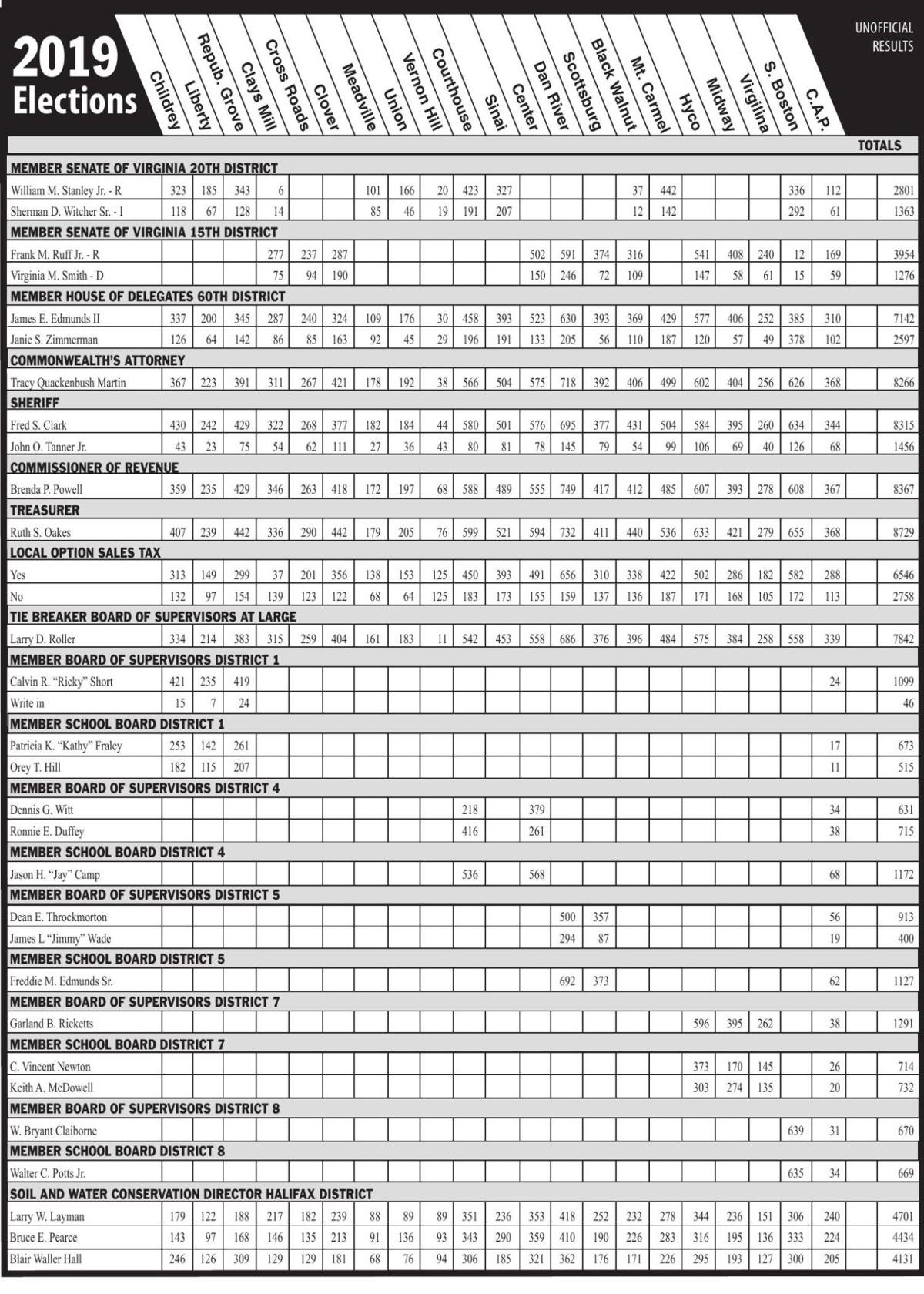 An overwhelming majority of Halifax County voters said a resounding “YES” to what many consider to be the most important question that has appeared on a county ballot in years — the fate of Halifax County’s proposed 1% sales tax increase.

Across the county’s 21 precincts on Tuesday, 6,546 county voters said yes, while 2,758 voted no to raising the current 5.3% sales tax to 6.3% when they went to the polls on a perfect weather election day that saw a “very good” voter turnout all day, according to the county registrar’s office.

The county board of supervisors placed the levy on the ballot -- the first of its kind in Virginia -- after Del. James Edmunds succeeded in changing state law to allow the historic referendum earlier this year.

The proposed sales tax hike is projected to raise about $3.3 million annually, or $100 million over 30 years, with revenues to be used exclusively for the construction or renovation of schools.

According to members of Team Halifax who lobbied heavily for passage of the referendum, of highest priority will be the modernization of Halifax County High School.

“We could not be happier with today’s voter turnout and the results of the sales tax referendum,” said Mitzi McCormick, Halifax County Chamber of Commerce president. “Our community has shown overwhelming support, and we are excited for the future of Halifax County schools.”

With passage of the referendum, now it will be up to the board of supervisors to decide the options — either renovation of the existing facility or construction of a new building.

By approving the referendum Tuesday, voters are enabling the board of supervisors to raise the sales tax a maximum of 1% when and if such a school project is identified.

Next will come lots of public input, then the board of supervisors could authorize a sales tax increase of up to 1% to pay for whatever project it decides upon.

Scott Simpson, county administrator, called Tuesday’s vote “likely one of the most important decisions the citizens of Halifax County will make in the history of the county.”

In approving the referendum at the polls on Tuesday, voters agreed the sales tax would be capped at a maximum of 1% and will expire no later than 2051 with revenues to be used only for the construction or renovation of schools.

By saying “YES,” the collection of the sales tax revenue will lessen the need for supervisors to raise real estate or personal property taxes as high as would have been required to make needed renovations to county schools had the referendum not passed, county officials agreed.

In addition, passage of the 1% sales tax increase means those who live outside of the county will help pay for part of the county schools’ construction and renovation when they spend their money in the county.

According to members of Team Halifax, a conservative estimate has visitors to the county paying well over 20 percent or $700,000 each year with county households picking up about $12 per month of these additional revenues.

If enacted by the board of supervisors, the 1% sales tax increase will not apply to groceries, automobile purchases and medicines.