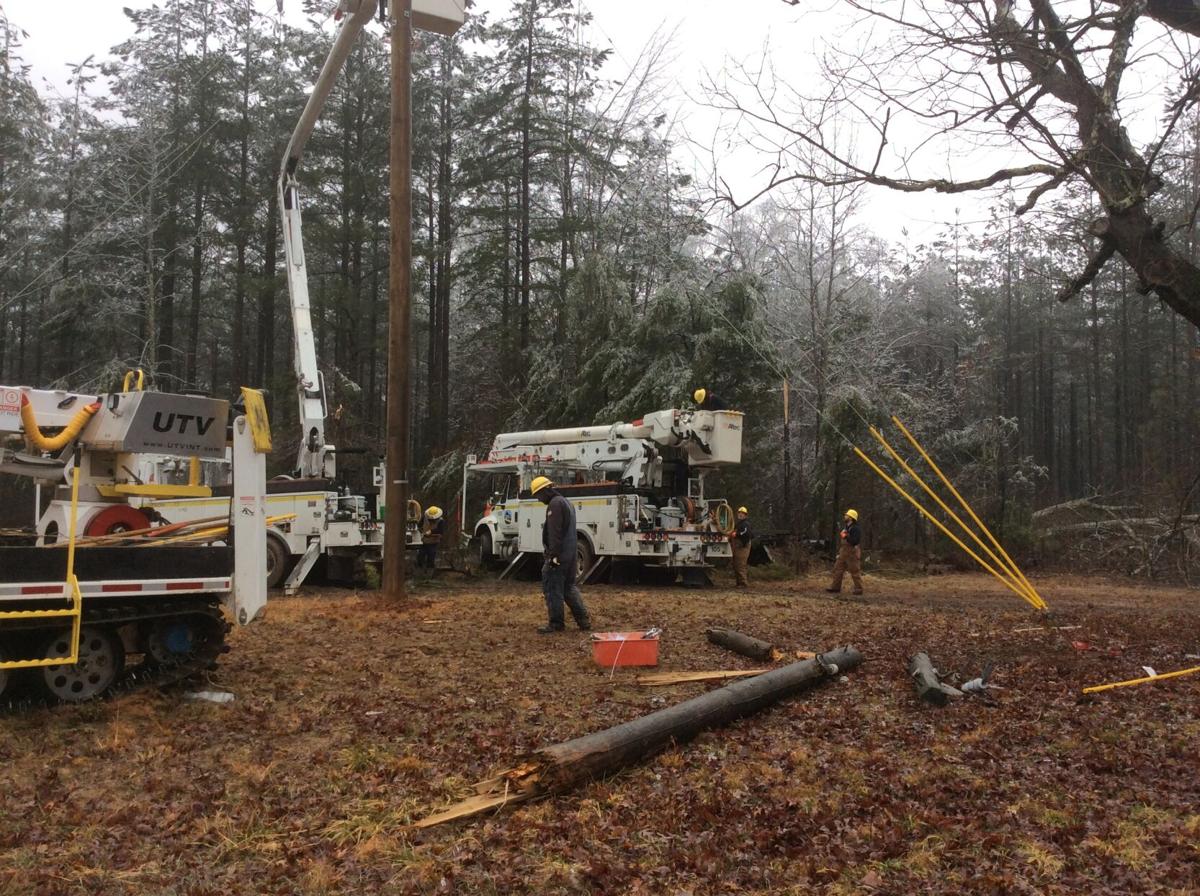 Crews with Mecklenburg Electric Cooperative work to restore power to customers following last weekend’s ice storm. At the peak of the outages, a little more than 70 percent of MEC’s customers in Halifax County had lost power. 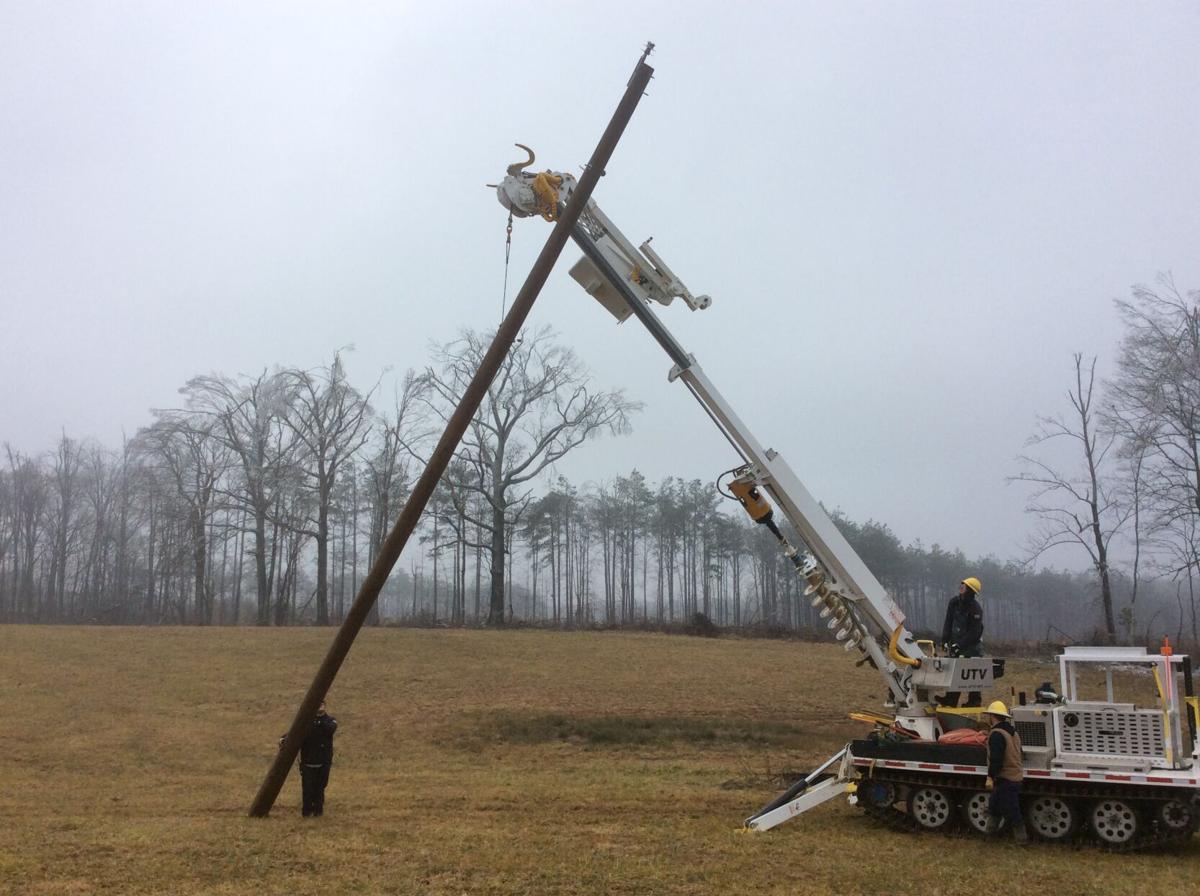 A crew with Mecklenburg Electric Cooperative works to reset a power pole that was toppled in last weekend’s ice storm. Another ice storm is in the forecast for Wednesday night and Thursday. 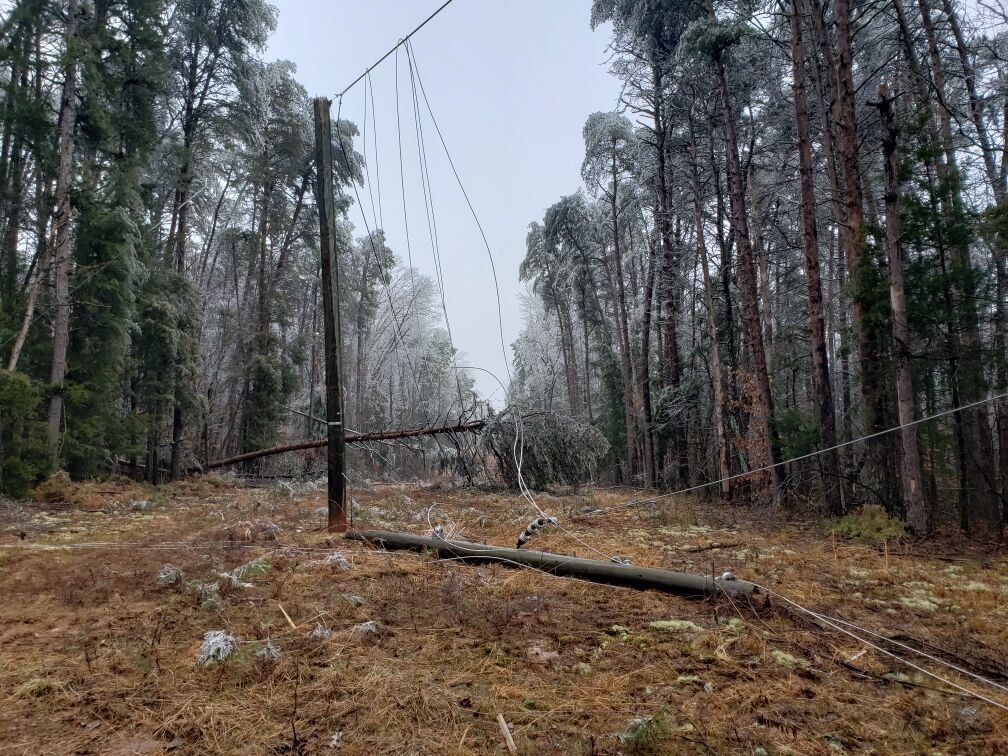 A devastating ice storm last weekend downed trees and power lines throughout Mecklenburg Electric Cooperative’s service region. Northern Halifax County was one of the hardest hit areas, and some residents in that area remained without power on Tuesday.

Another ice storm is in the forecast for Halifax County Thursday morning.

And meteorologists warn that this storm system is shaping up to be worse than the ice storm that hit Southern Virginia last weekend.

“This is going to be at least as impactful if not more impactful than the last system that just came through,” said Reggie Roakes, a meteorologist with the National Weather Service in Blacksburg. “A good case scenario is a quarter inch of ice for the South Boston area, but we’re leaning toward the half inch side. We are looking to possibly bump up that (forecast) ice amount later this afternoon.”

As power companies work steadily to restore service to customers, another impending ice storm looms ahead, with predictions of more widespread power outages.

“Start making plans now for alternate heating sources,” Roakes advised. “More trees are going to come down, and more power lines are going to be brought down.”

The NWS has issued a winter storm watch for Halifax County in effect from late Wednesday night through Thursday evening.

The icy forecast is bad news for the power company crews still working to restore power to customers and customers who just had their power restored following last weekend’s ice storm.

The widespread power outages led to the closure of Halifax County Public Schools on Tuesday and Wednesday.

Tuesday would have been the first day of face-to-face instruction in nearly a year for pre-kindergarten through third grade students. Special education students and English Language Learners also were set to return Tuesday.

In addition to the schools being closed for face-to-face instruction Tuesday and Wednesday, the superintendent said no virtual learning sessions were held because of many students’ lack of internet access due to the widespread power outages.

“Halifax County was one of our hardest hit areas during the ice storm,” said Jeremy Slayton, a spokesperson for Dominion Energy, on Tuesday. “We’re working around the clock to get the vast majority of customers restored today, but for the harder hit areas, it could be tomorrow until we’re able to get them restored.”

Slayton added ice presents challenges from an infrastructure and a safety standpoint.

He explained the ice accumulation leads to broken poles and downed wires, and ice can linger on power lines for a period of time depending on the temperature as in last weekend’s storm, making it unsafe for crews to begin repairing the lines.

In addition, Slayton said downed trees across roadways could make lines in need of repair inaccessible to crews until they are removed.

Nonetheless, he said Dominion Energy’s line workers finishing up power restoration work from last weekend’s storm are prepared to meet the challenges the next ice storm may bring.

“Our line workers are experienced. They’re trained to perform the repair work,” Slayton asserted. “Whenever the challenge arises, they will answer the call.”

He added northern Halifax County was one of MEC’s hardest hit areas, and because of the amount of work necessary to repair those power lines, it is taking longer to restore service to those customers.

“In the devastated areas of Pittsylvania County and north Halifax, crews will continue to make repairs to mainline three-phase outages and then move to larger neighborhoods,” Lipscomb said in a Tuesday morning outage update issued to media outlets.

Out of 82 broken power poles throughout MEC’s service area, Lipscomb said 23 had been replaced as of Tuesday morning.

He said the ice from last weekend’s storm was so heavy that it had pulled up the anchor wire that helps support the power poles inches out of the ground.

Lipscomb also said the ground was so saturated in places that it was not safe for linemen to enter the areas to restore power, so MEC had been using track machines (pole-setting machines on bulldozers) to reset power poles in those areas.

NWS meteorologists caution the saturated ground in Halifax County could present problems with another round of precipitation in the forecast.

On Tuesday, the NWS issued a flood warning for the Dan River at South Boston, with the river predicted to crest at 23.8 feet — minor flood stage — Wednesday morning.

But Roakes cautioned that the runoff from creeks and streams into the Dan River from Thursday’s weather system could lead to another river crest later in the week.

The good news is that a slight warm up is in the forecast for Friday with temperatures reaching the mid-40’s, bringing the potential to melt some of the ice from Thursday morning’s storm. But the chilly weather will return Saturday, with high temperatures only reaching the 40-degree mark.

Tree near intersection on River Road near Sinai Road