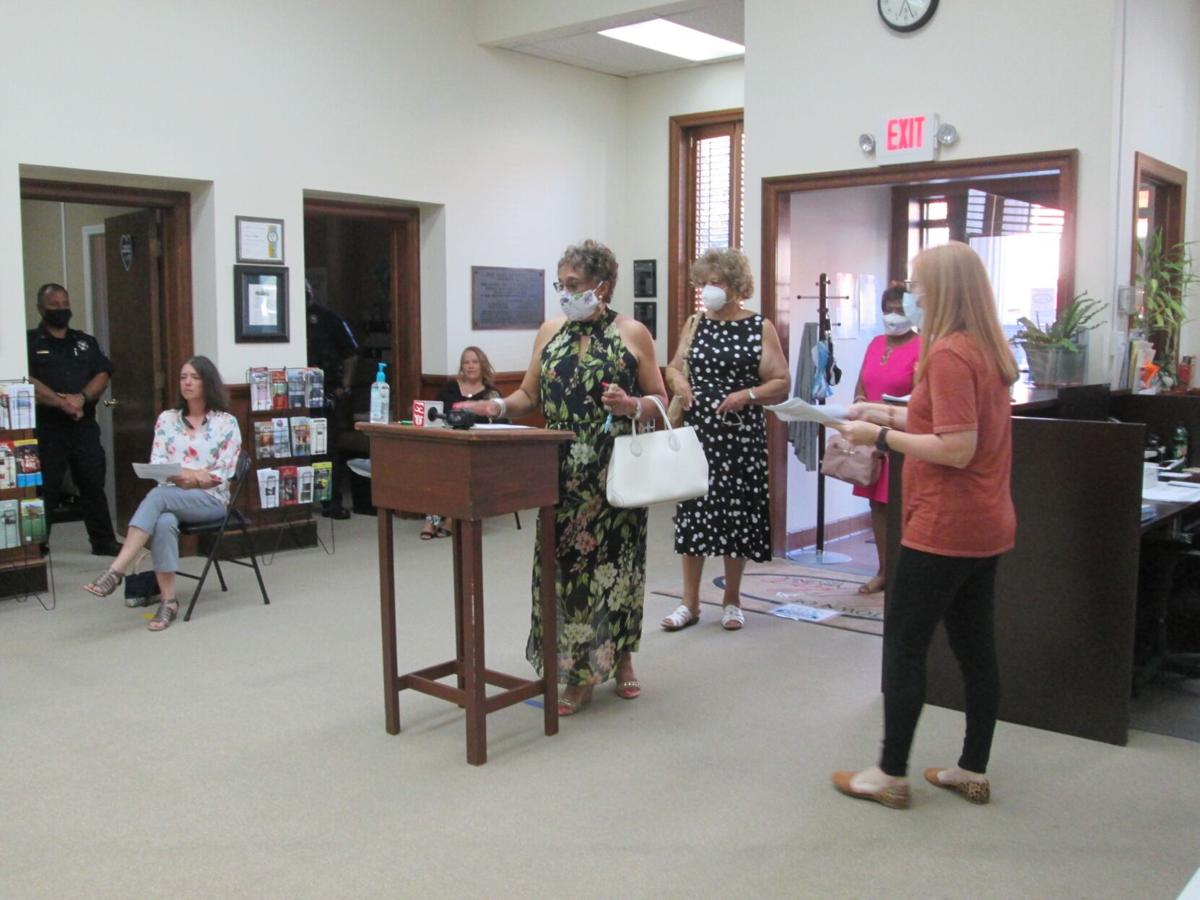 Citizens file into the Halifax Town Hall Tuesday evening and sign up to speak in the public comment section of the town council meeting. Assistant Town Manager Denise Barksdale (right) manages the sign up sheet. 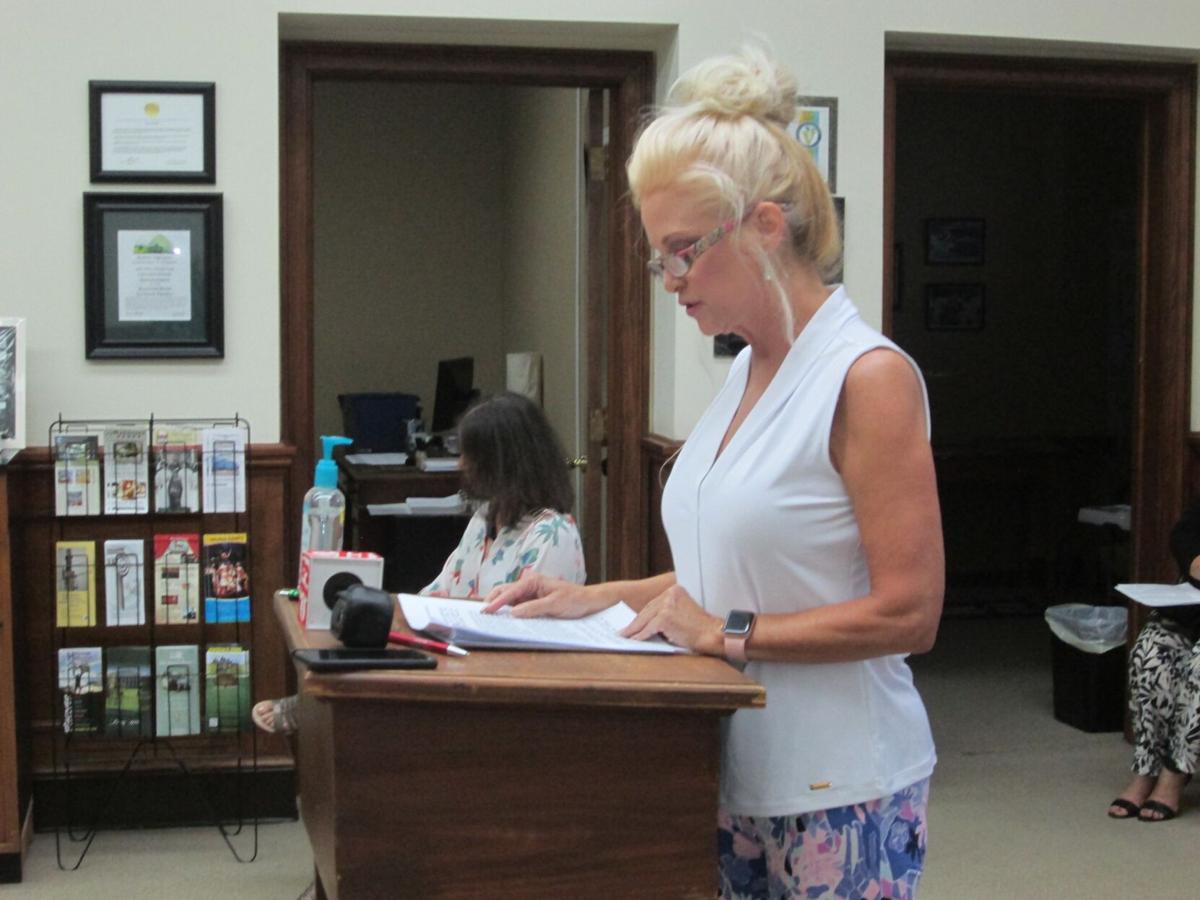 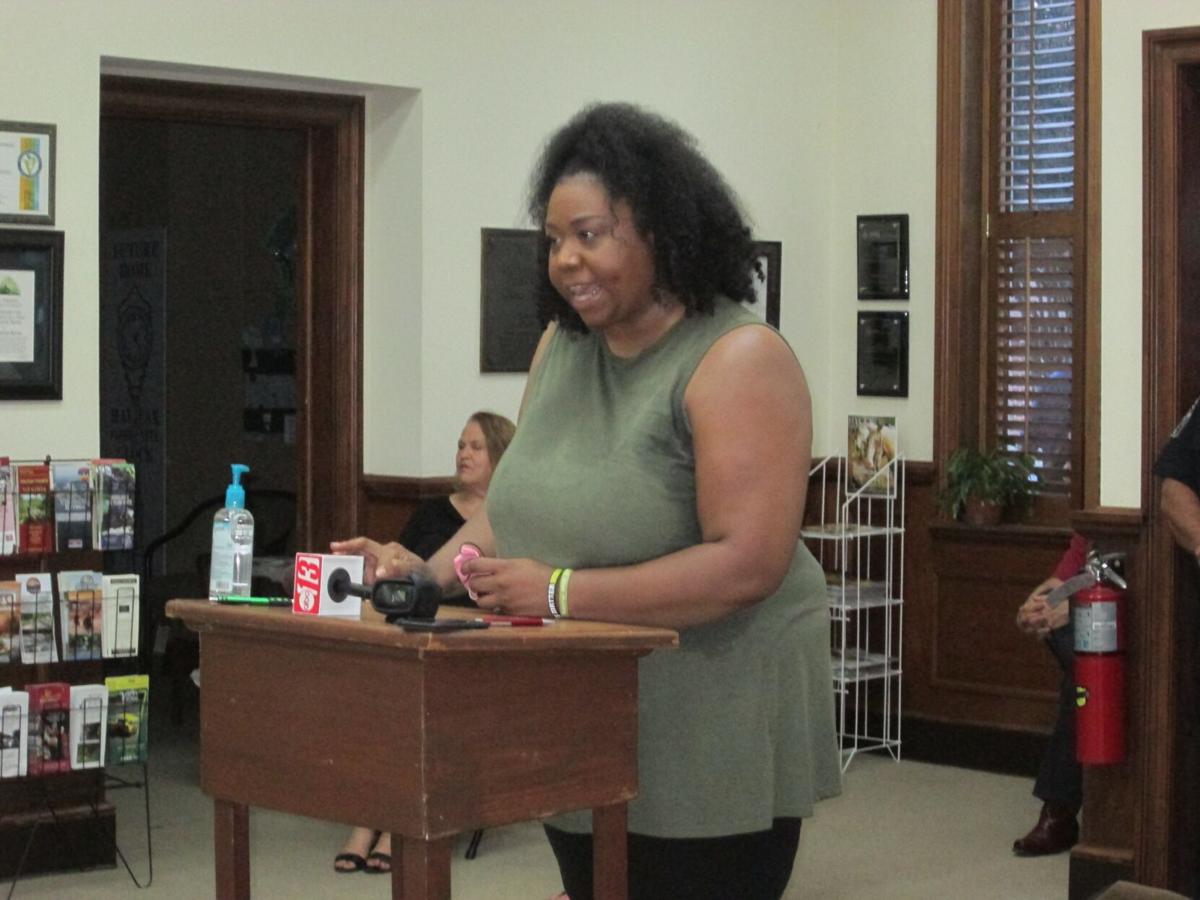 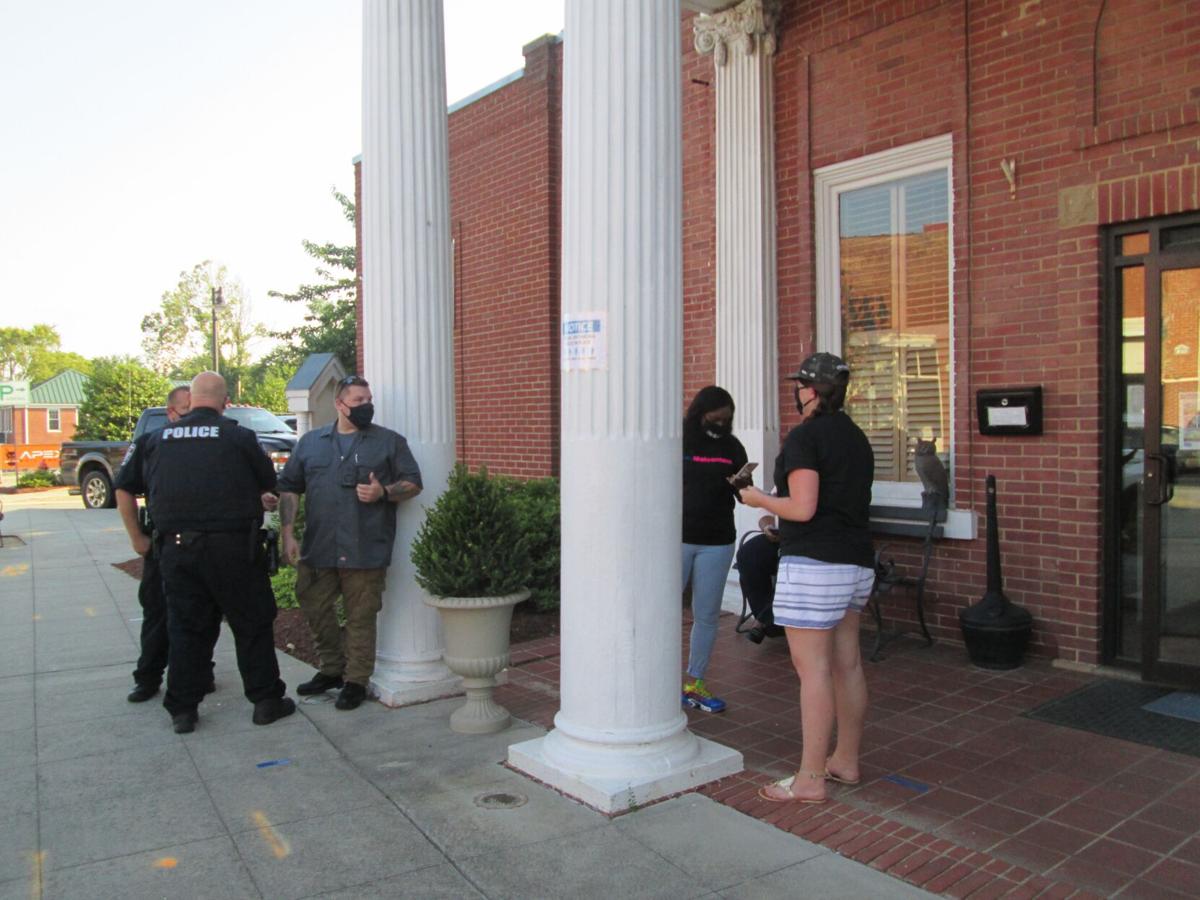 Police officers with the town of Halifax stand outside Halifax Town Hall on Tuesday evening as a group of citizens gathers to share their concerns with council about a letter written by Halifax Town Councilman Jack Dunavant. 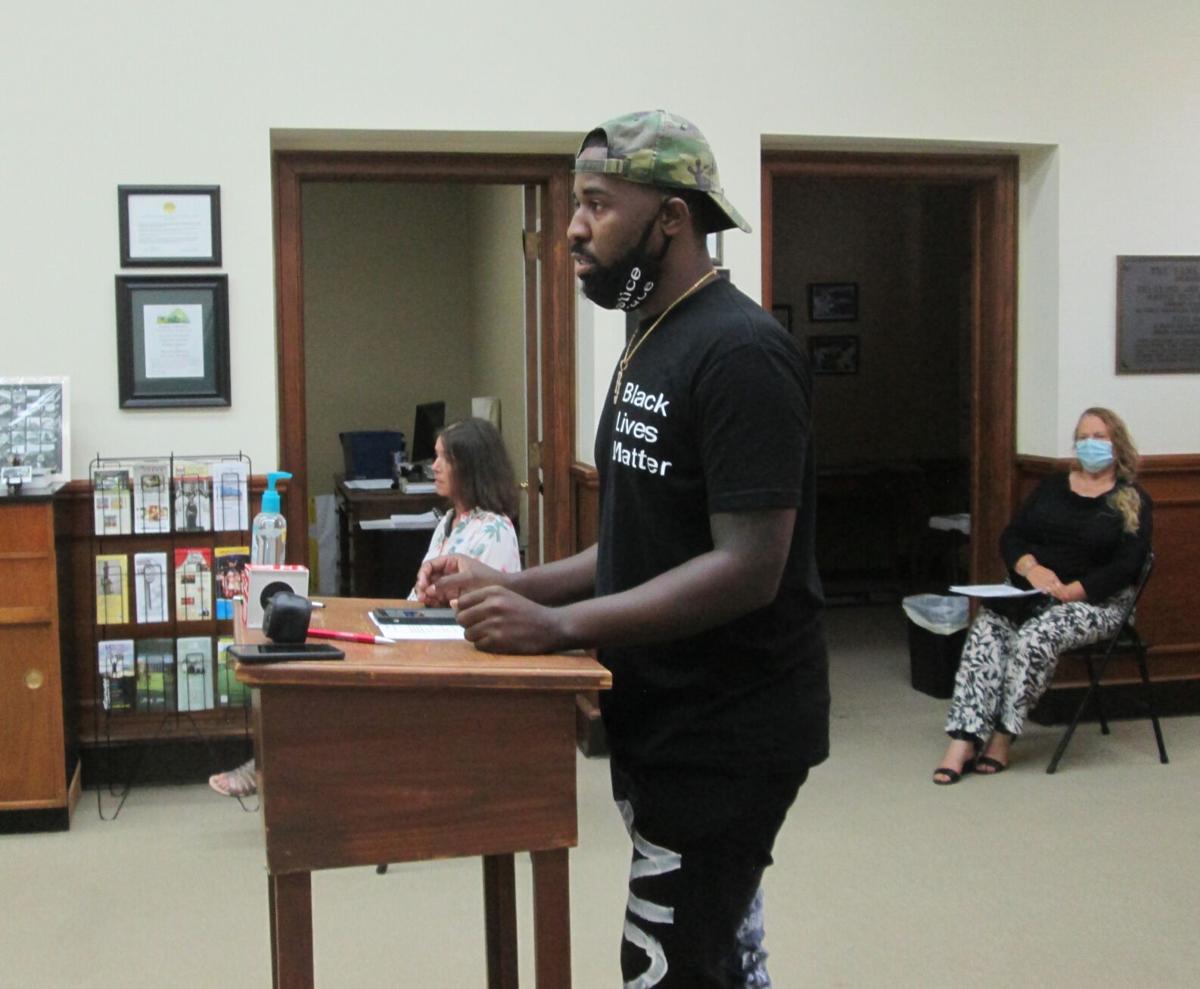 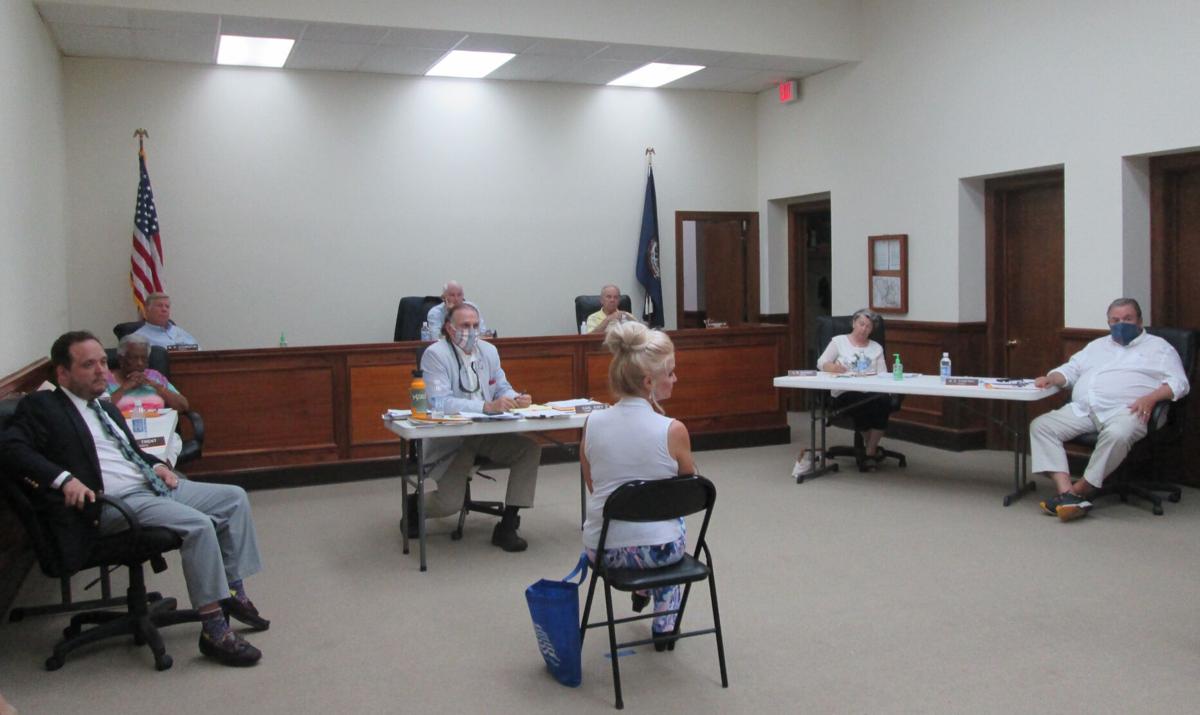 Members of the Halifax Town Council listen to the public comments at their Tuesday evening meeting regarding a letter to the editor written by town councilman Jack Dunavant (pictured in the back right). 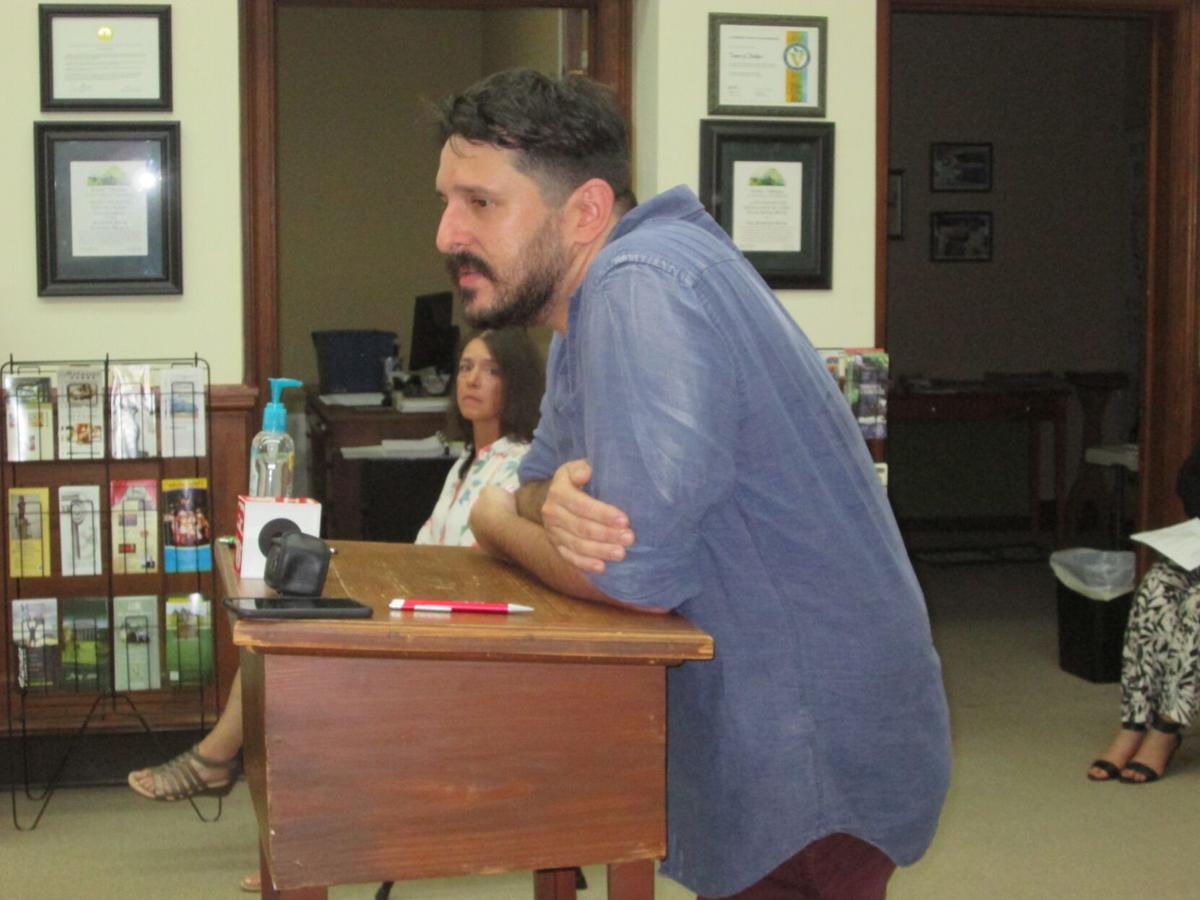 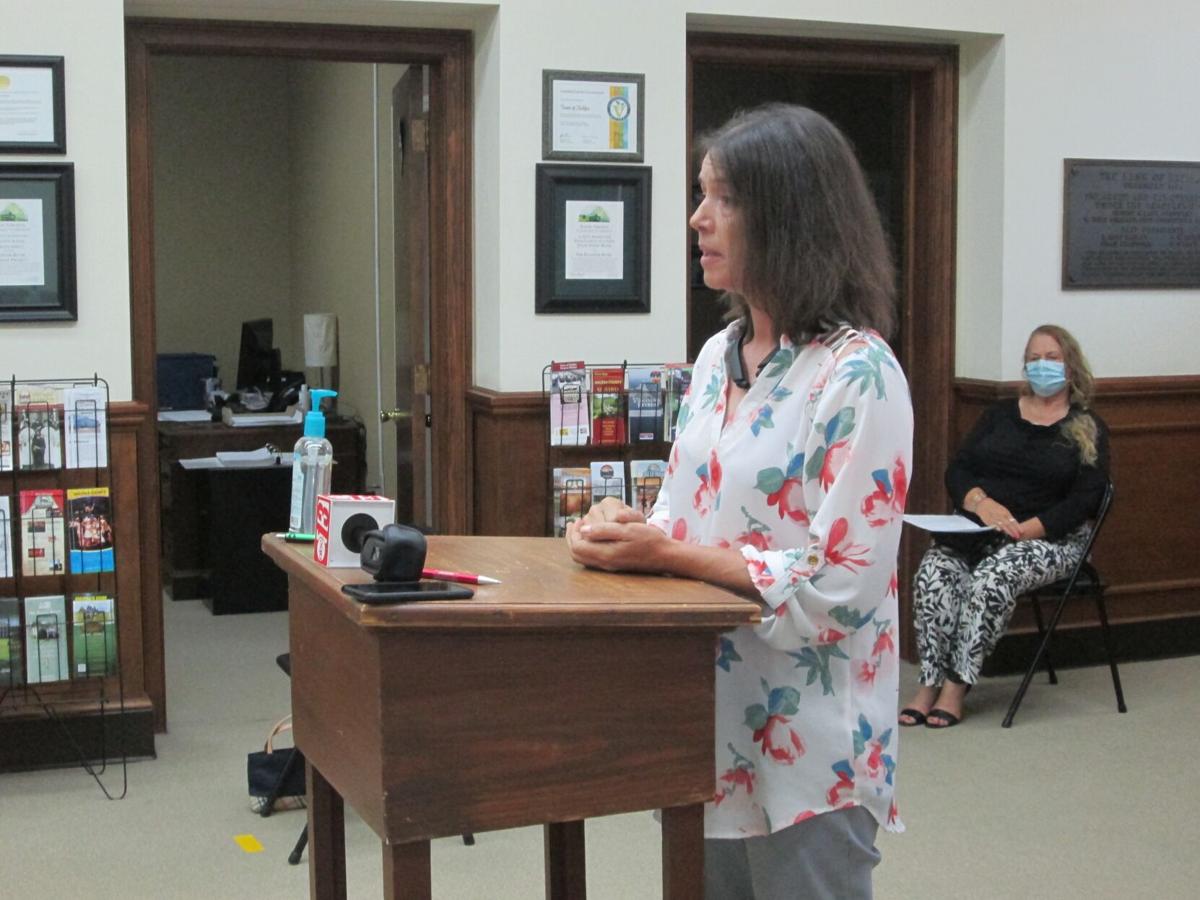 Citizens file into the Halifax Town Hall Tuesday evening and sign up to speak in the public comment section of the town council meeting. Assistant Town Manager Denise Barksdale (right) manages the sign up sheet.

Police officers with the town of Halifax stand outside Halifax Town Hall on Tuesday evening as a group of citizens gathers to share their concerns with council about a letter written by Halifax Town Councilman Jack Dunavant.

Members of the Halifax Town Council listen to the public comments at their Tuesday evening meeting regarding a letter to the editor written by town councilman Jack Dunavant (pictured in the back right).

Ten people shared their opinions in the public comment portion of the evening on the contents of a letter to the editor “Killing America” written by Halifax Town Councilman Jack Dunavant and published in the local newspapers, which some perceived as racist.

While some of the people detailed the problems they had with the letter, a couple even calling for Dunavant’s resignation from town council as a result, others spoke in Dunavant’s defense.

Dunavant is a senior councilman who represents Ward C in the town of Halifax. His current term on council expires in December 2022.

Taquan Logan of South Boston, who started an online petition for Dunavant’s resignation that has garnered about 900 signatures, also talked about the problems he has with Dunavant’s letter, one of which is the use of the term “colored people” in reference to Black people.

“We’re in 2020, and I, for one, don’t consider being called ‘colored’ by anybody,” Logan said. “We’re not here to tolerate being called anything out of the way by someone on this board. We feel like if somebody’s in that position, then we’re not being treated equally by the people that are making decisions in this town.”

Another problem Logan had with Dunavant’s letter was the statement: “Sadly today, nine out of 10 Black children are born out of wedlock.”

“There are also other races that have kids out of wedlock, so it’s not all a Black thing,” Logan said.

Barbara Coleman-Brown, president of the Halifax-South Boston chapter of the NAACP, also called for Dunavant’s resignation, saying Dunavant “lacks vision for the future and instead wants us to go back.”

“You refuse to accept the privilege that you have grown up with your entire life,” Coleman-Brown said to Dunavant.

Beverly Smith of Halifax also called for Dunavant to resign and new leadership to take his place.

“I think, Mr. Dunavant, your time here in Halifax County has come to a close. We are a new generation,” Smith said. “You don’t see people of color equally…I have two Black sons at home, and I’m just floored that you, a person in leadership, feels this way toward other people in this county, and that you guys continue to let him sit up here on the board.”

Others spoke in support of Dunavant, including his daughter, Sarah Dunavant.

“Jack has served on town council for 30 years, unopposed. Let that sink in. In this past election, Jack looked for someone to step into position, but no one else wanted to serve, so he did again. Let that sink in,” Sarah said. “Anyone who knows Jack knows that he’s a good person with an exceedingly kind heart who often goes out of his way to help people of all races and backgrounds, and there are many testaments to that fact.”

Sarah added, “Jack’s love for Halifax County and all of its people is indisputable. If the greatest sins Jack has committed is speaking the truth, wanting to better his community and the country, loving and being loved by people he considers family, I think the world would be a better place if we were all a little more like him.”

Mitzi Thompson, a member of the Halifax County Militia, also spoke in Dunavant’s defense. She told council part of the militia’s mission is to uphold the United States’ Constitution, and she supported Dunavant’s 1st Amendment right to freedom of speech.

“Having a council member exercise his 1st Amendment, there’s nothing wrong with that,” Thompson said, adding, “I do not feel, nor does anyone else who I have discussed this with, feel that there was any ill intent in the (Dunavant’s) letter.”

Dan Elam shared similar thoughts. He said while Dunavant “certainly doesn’t prescribe to be politically correct,” he knows he had no “ill intent” in the writing of his letter to the editor.

“I do know that Jack’s heart is in the right place, and he certainly cares about Halifax,” Elam said.

Tracey Rumer, a Halifax native and Raleigh, North Carolina resident, also spoke in Dunavant’s defense. She said she “wholeheartedly” agrees with the contents of Dunavant’s letter, and that it is a problem in today’s society that some Americans have “gotten used to living off the system and not providing for themselves.”

A tense overall atmosphere pervaded the meeting, not only in the comments of the speakers who were unwavering in their opinions which varied to a wide degree. The atmosphere in the room had turned contentious even before the first person signed up for public comment took the podium to speak.

Council had passed a resolution regarding citizens’ comments earlier in the meeting, and just prior to hearing the public comments, Halifax Mayor Dexter Gilliam reiterated the ground rules.

“We are pleased to hear your comments this evening. This is a part of the democratic process,” Gilliam said. “We are here tonight to conduct the business of the town. We’re going to be respectful to others who are present. We are here to speak in civil discourse and that’s what we are going to do.”

The mayor added that each person would have a total of three minutes to speak, and one hour had been allocated for the public comment portion of the meeting.

The atmosphere inside the town hall shifted when a question arose about the small crowd that had just entered the town hall for the public comment portion of the meeting and the lack of social distancing. Gilliam asked everyone to exit the town hall until it was their turn to address council, and the town’s police officers began escorting people out of the building. But Elizabeth Blair Trent, who is a local attorney and the wife of Halifax Councilman Mike Trent, told the mayor and council she wasn’t going anywhere, because it was a public meeting and everyone signed up to speak had a right to hear what others had to say. Smith took a stand with Trent, refusing to leave the building.

The mayor told Trent and Smith that if the rules set by council and proper social distancing were not followed, he would adjourn the meeting, and no one would have the opportunity to speak. Trent and Smith chose to step outside, with Smith later addressing council.

One of the speakers who re-entered town hall later to address town council, Ebony Guy of Danville, expressed her displeasure with being asked to wait outside in the heat during the public meeting.

“What has transpired today by this body has been so troubling that if action isn’t taken, we’ll do what we can to do what needs to be done,” Guy said. Her reason for coming to the meeting was to speak out against Dunavant’s letter.

While council did not directly respond to any speaker, both Dunavant and Councilman Trent made comments at the conclusion of the public comments portion of the meeting.

Dunavant said he never intended to offend anyone by writing his letter.

“I love all people of good will,” Dunavant commented. “I will do anything for this town and for this county, and I hope we can all work together to bring us together. I much prefer that…If we all work together, something good will come of this.”

The senior councilman added that the purpose of his letter “Killing America” was to show how America has strayed from Christian morals and values over the past few decades.

“We are ruining this country by taking the father figure out of the home,” he said.

Trent also made remarks, explaining he has been “conflicted,” because he sees problems with Dunavant’s letter yet he respects Dunavant as a fellow councilman and as a person. During Dunavant’s time on council, Trent said he has done things for everybody in the town of Halifax, not just the residents of his own district.

Trent said the issues Dunavant discussed in his letter, such as the nation’s “turning away from God,” are “societal problems, not just African-American problems,” and the problem he sees is that the letter pins the problems only on African-Americans.

“I think it rightfully causes hurt and division when we take a societal problem and pass it on to one group of people,” Trent said. “I think there was a way to get the general societal points across that doesn’t divide us more…We have to remember when we say things we’re not just speaking for ourselves, and I think we all need to do better.”

Mayor Gilliam adjourned the meeting after hearing the public and council members’ comments, and no further action was taken.