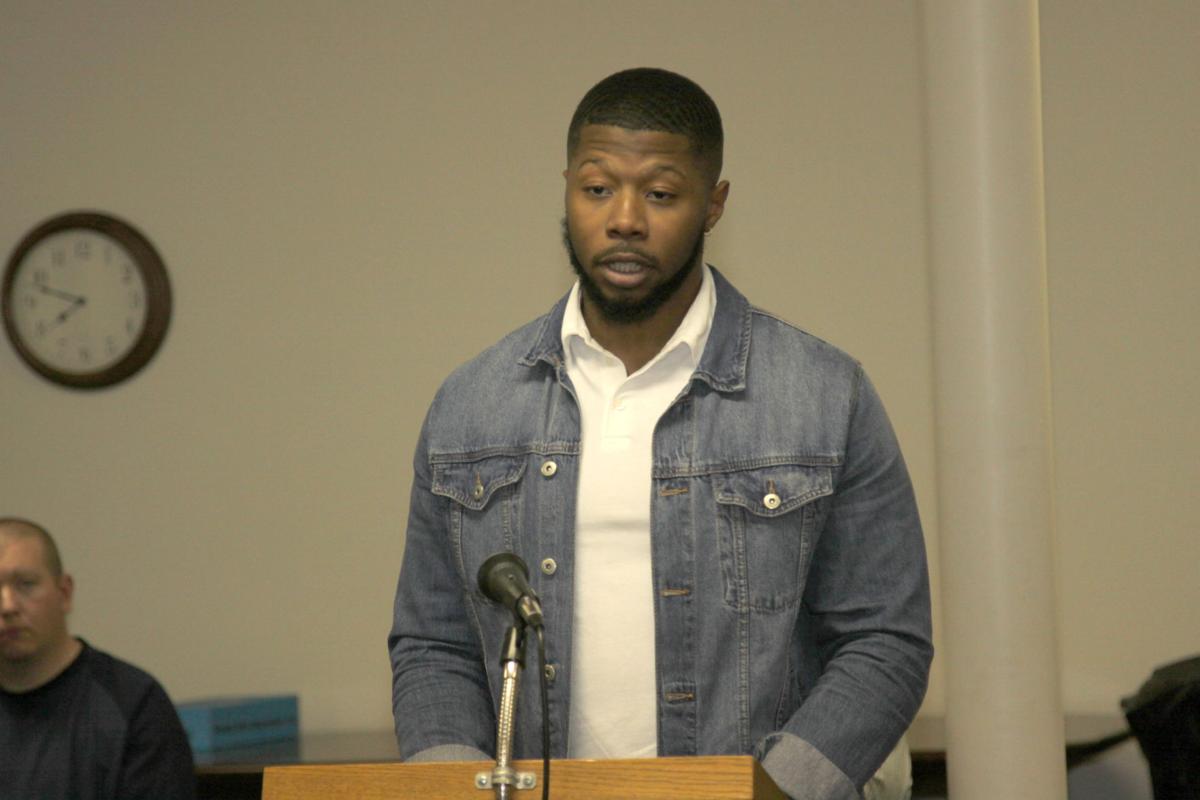 Shelquon Edmonds, a 20-year-old Halifax resident, has filed a complaint with South Boston Police alleging a violation of his civil rights on the night of Nov. 30. 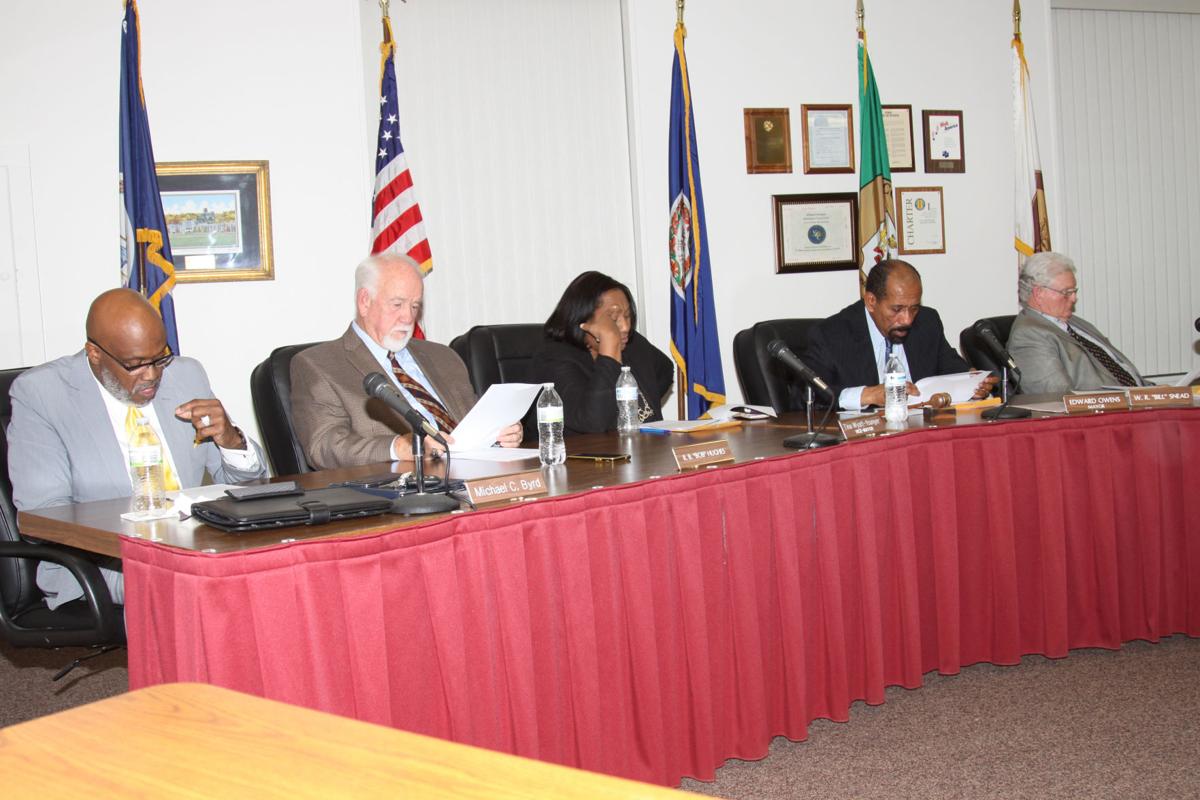 Members of South Boston Town Council study a written statement provided by Shelquon Edmonds at Monday’s meeting alleging a violation of Edmonds’ civil rights during a traffic stop in Riverdale on Nov. 30.

Shelquon Edmonds, a 20-year-old Halifax resident, has filed a complaint with South Boston Police alleging a violation of his civil rights on the night of Nov. 30.

Members of South Boston Town Council study a written statement provided by Shelquon Edmonds at Monday’s meeting alleging a violation of Edmonds’ civil rights during a traffic stop in Riverdale on Nov. 30.

South Boston Police and a 20-year-old Halifax man are at odds over a traffic stop that ended in Riverdale in the early morning hours of Nov. 30, with Shelquon Edmonds filing a complaint with South Boston Police alleging a violation of his civil rights.

Edmonds is facing a charge for misdemeanor obstruction of justice lodged by South Boston Police Officer Ryan McGuire as a result of the traffic stop, according to Captain Dennis Barker.

“Recently, I was involved in a police brutality situation,” Edmonds told council, adding the matter remains under investigation.

“Personally, I do not trust the administration of the South Boston Police Department,” Edmonds said.

“I know of fellow citizens of this community who have had incidents with this same officer. Other black people have been treated unfairly, with those matters swept under the rug,” he added.

A male and female police supervisor were on the scene, and they witnessed him being beaten, according to Edmonds.

“I felt my civil rights were violated, and I want the town manager and mayor to know and members of town council to know,” he told council.

Edmonds, in a statement to council, said he was the driver of a vehicle with three other individuals that was pulled over around 12:30 a.m. in the Riverdale Plaza shopping center for a broken headlight.

Edmonds, who didn’t identify McGuire as the officer who conducted the traffic stop, said the officer asked him to get out of the vehicle without giving him a reason.

“He reached in and opened my door. I was recording as I got out of the car, and from there he got very aggressive and put me in numerous chokeholds,” said Edmonds. “He spun me around a few times, and a female officer stepped in, and she got aggressive as well. Eventually I forced myself to the ground, and then he pulled out his baton and struck me on the back of my leg twice when I was on the ground.”

Outside council chambers, Edmonds said he wanted to record the traffic stop, because he did not feel comfortable.

“He said ‘put your phone down,’ and I said, ‘No sir, I have every right to record,’” Edmonds said, telling council a complaint has been filed but that he didn’t trust the process.

“I just wanted to be heard and for something to be done,” added Edmonds. “I have witnesses, and there’s footage I can’t share, because the matter is under investigation.

“I want to make sure the right people hear this story,” said Edmonds, saying he suffered scrapes to his forehead, elbow and knee as a result of the incident.

South Boston Police Captain Dennis Barker acknowledged on Tuesday a complaint had been filed with the police department in connection with the incident.

“On the night of Nov. 30, officers responded to an area near the Quality Inn and Badeaux’s on Seymour Drive in reference to a disturbance and unruly crowd,” said Barker. “Once they get there, they noticed several subjects yelling back and forth and screaming.”

Security guards at the scene told police there may have been some issues, possibly a fight between some individuals, according to Barker.

“There was some damage on a gate at Adam’s Total Fitness on Seymour Drive, and officers approached one group at the property telling them they had to leave,” Barker explained.

“The property is posted, and there were multiple cars on the property at that time. The individuals got into a car but didn’t leave initially, and the officer noticed alcohol poured out of the vehicle onto the parking lot, and the container was thrown into the bushes at Adam’s Total Fitness,” he continued.

The vehicle then left the lot, and officer McGuire and another officer initiated a traffic stop at the Riverdale Plaza Shopping Center, according to Barker.

McGuire lodged criminal charges against Edmonds, including one for obstruction of justice as a result of the traffic stop, and those charges are pending in Halifax County General District Court, said Barker, who could not comment on any ongoing personnel matter involving McGuire.

The incident is still under investigation, Barker added.