The South Boston Planning Commission votes to recommend denial of a special use permit application for a proposed solar facility at a Wednesday evening meeting in the council chambers. 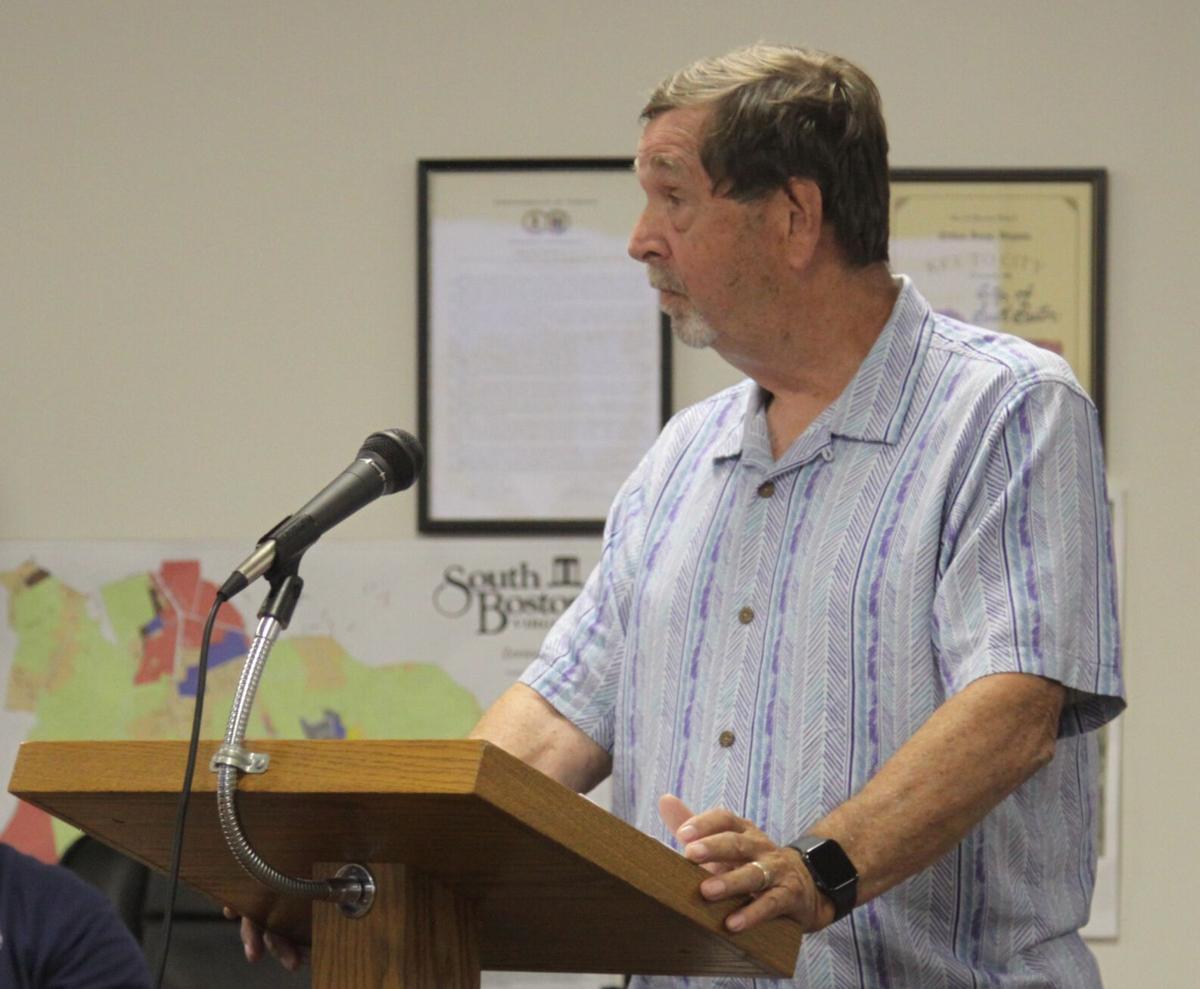 Dewey Compton voices his opposition to a special use permit application to locate a solar facility next door to Edmunds Park during a public hearing on the subject at a South Boston Planning Commission meeting. 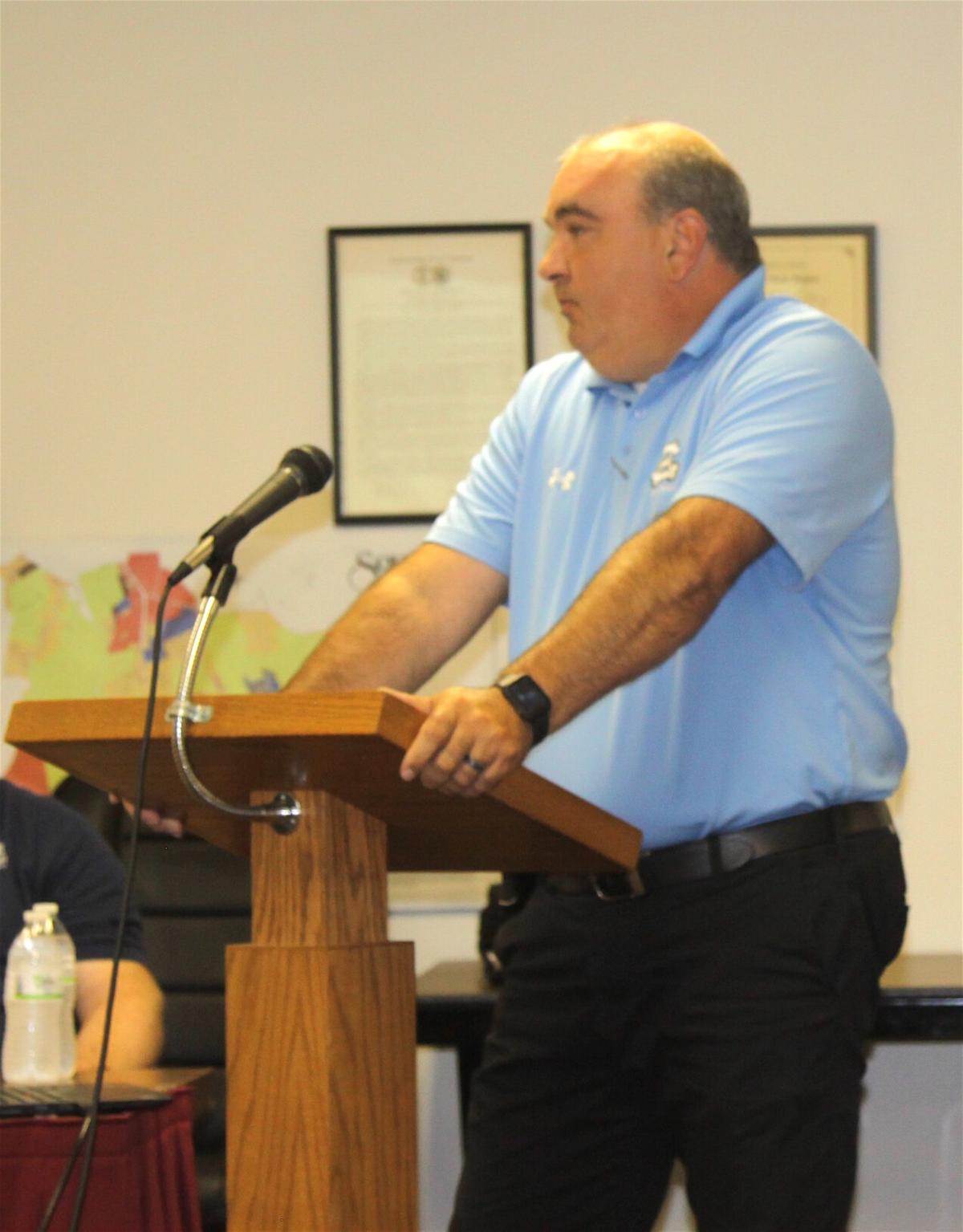 Michael Lewis, a resident of James D. Hagood Highway, speaks out in opposition to a proposed solar facility near his residence in a public hearing at Wednesday evening’s South Boston Planning Commission meeting. 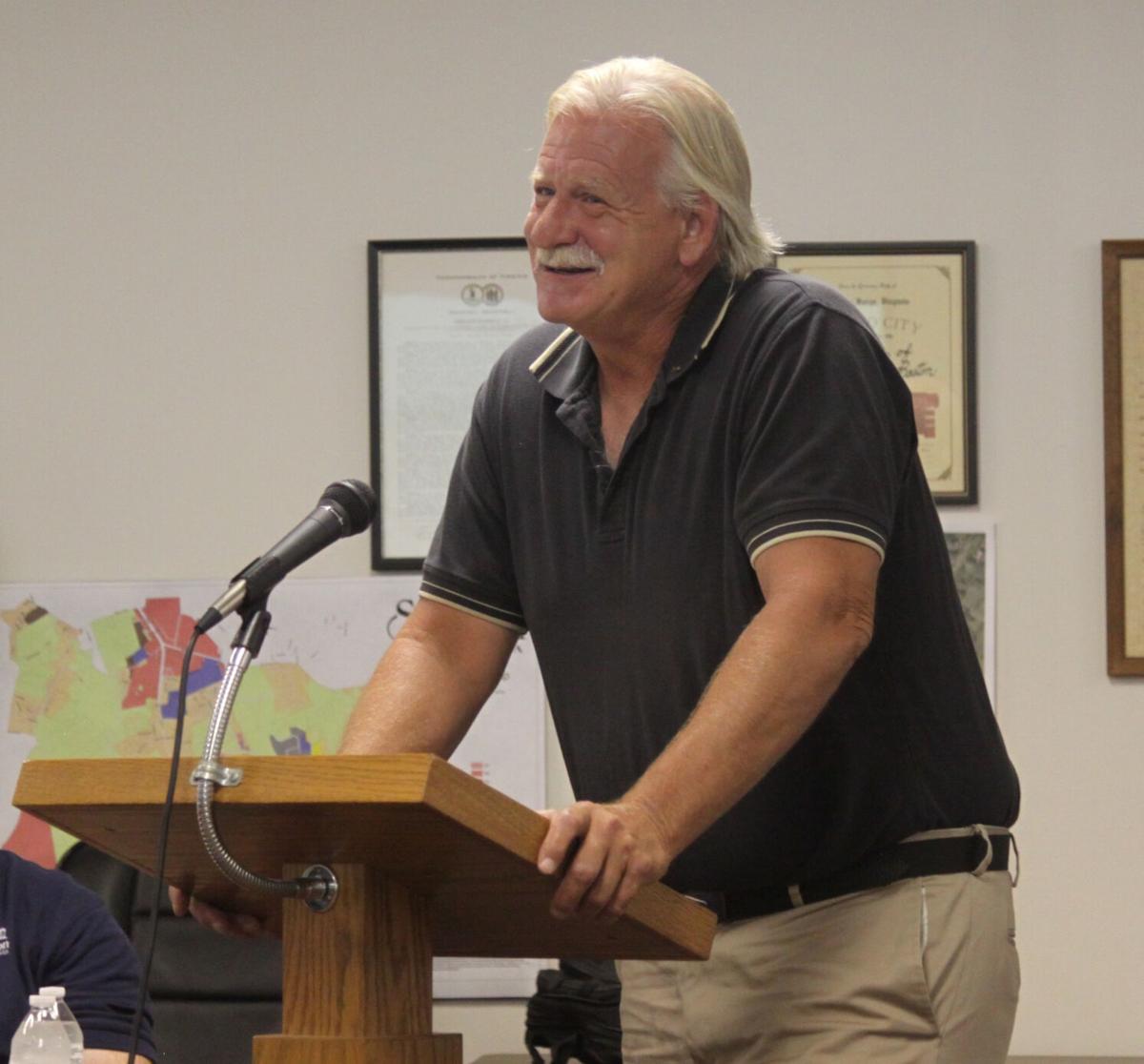 Bill Short, director of parks and recreation for Halifax County, expresses his concern that a solar facility might infringe on the county’s future expansion of Edmunds Park during a public hearing on a special use permit application for a proposed facility adjacent to Edmunds Park at a South Boston Planning Commission meeting. 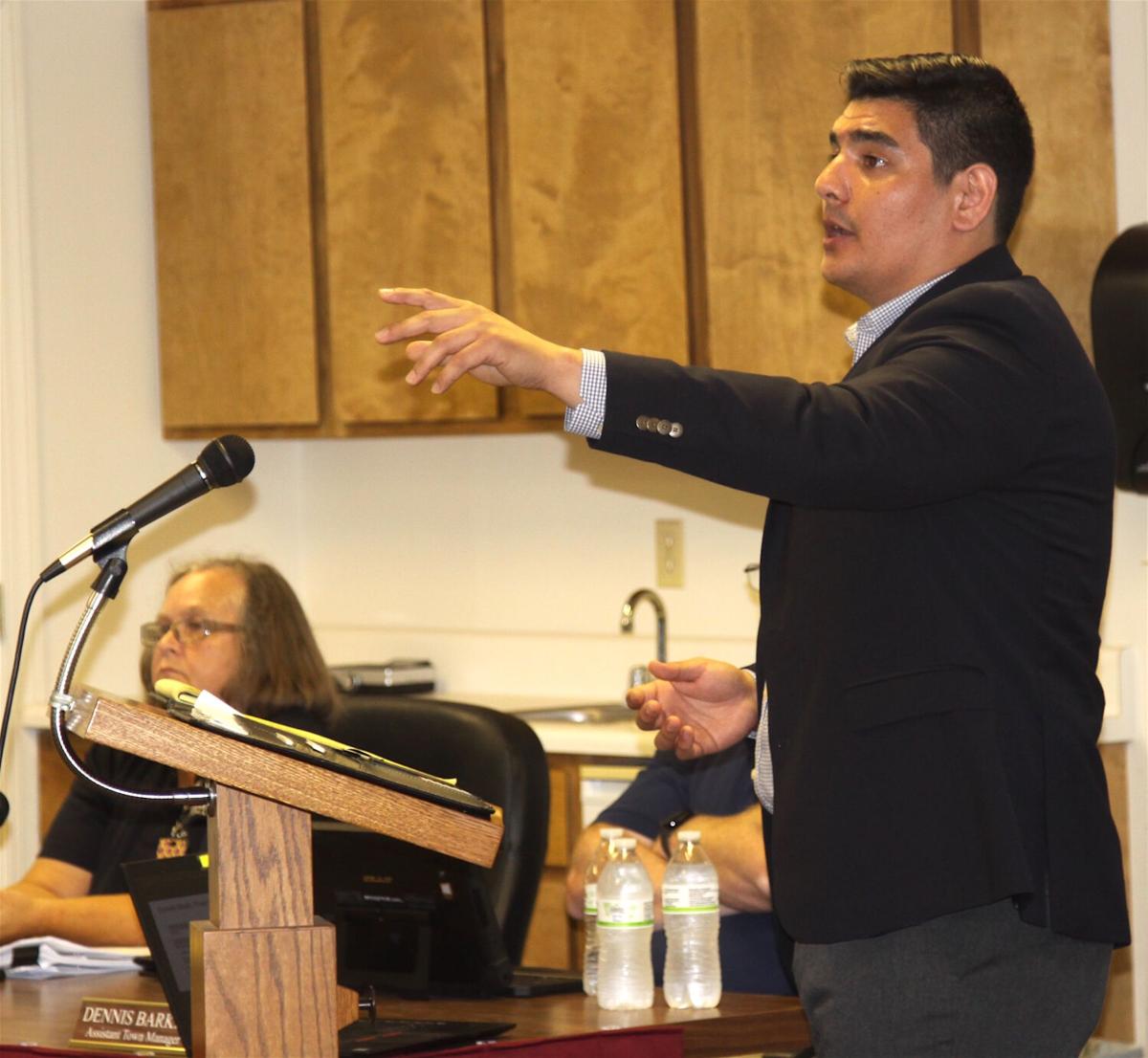 Kieran Siao, director of development for Atlanta, Georgia-based Dimension Renewable Energy, gives a presentation on a proposed solar facility in the town of South Boston to the South Boston Planning Commission on Wednesday evening. 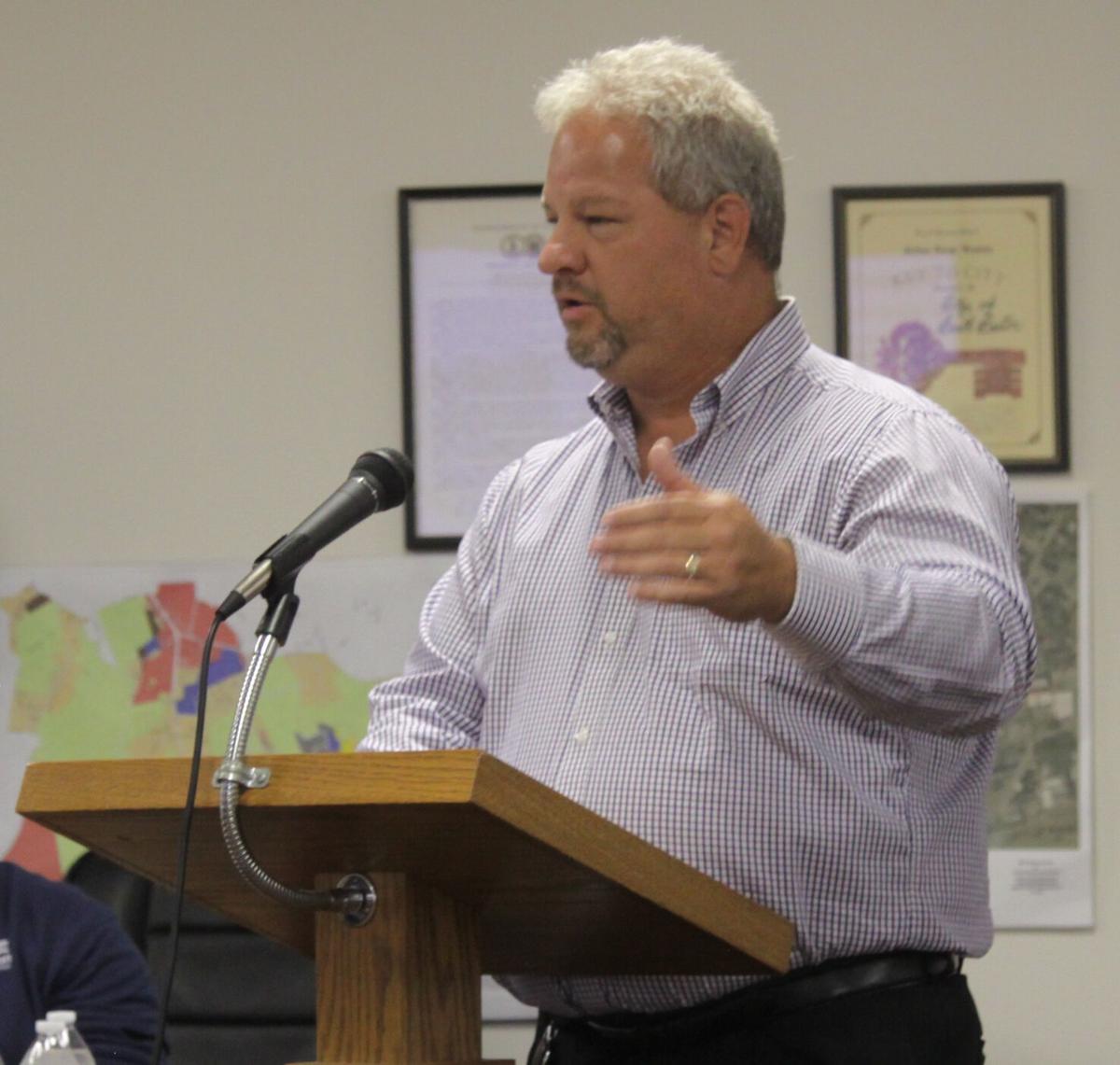 Halifax County administrator Scott Simpson shares his thoughts on a proposed solar facility, located next to Edmunds Park and across the road from the Halifax County Fairgrounds, during a public hearing on the proposed project at a South Boston Planning Commission meeting.

A proposed solar facility that would be a first in the town of South Boston hit a roadblock when the South Boston Planning Commission voted Wednesday evening to recommend denial of the special use permit application for the proposed facility.

The fate of the solar facility now rests in the hands of South Boston Town Council, which will take a final vote on the denial or approval of the application.

“I really think we need to think twice before we approve this. I wonder if this is the right place to locate these panels,” said commission chairman George Leonard, after the town’s zoning administrator Hope Cole recommended the planning commission deny the special use permit application.

Kieran Siao, director of development for Atlanta, Georgia-based Dimension Renewable Energy, gave a presentation on the proposed solar array, which would generate 5.4 Megawatts of direct current/4.0 Megawatts of alternating current.

The proposed facility would encompass 13.9 acres, situated on 53.02 acres of land on Route 360/James D. Hagood Highway, Siao said in his presentation.

Part of the property is the old Edmunds Dairy Farm, and the land is located adjacent to Edmunds Park and across the road from the Halifax County Fairgrounds.

Michael and Amy Lewis, neighboring residents of James D. Hagood Highway, expressed their misgivings about the location of the solar facility in that area.

“South Boston and Halifax County maintains Edmunds Park just adjacent to this site. This would degrade this area greatly,” said Michael Lewis, who is also the principal at Halifax County High School. “Further, this corridor is a gateway to our town and I’m sure the county and the town can find a better use for this land.”

At Wednesday’s meeting, Siao shared his view of the potential benefits of the solar facility, and why he believes it is a good use of the land.

The solar array would generate power for approximately 800 homes served by Dominion Energy, which would generate monthly savings for the residents on their electric bills, Siao said.

The lifespan of the project is 25 years.

Siao also said the topography of the land lends itself well to the project, and the solar facility would preserve the agriculture/ landscape of the area, unlike a housing development or other type of commercial development.

But neighbors and county officials alike voiced their opinion that the proposed solar energy project was not a good fit for the property.

Dewey Compton, a resident of Cedar Ridge Terrace, shared with the planning commission that he walks Edmunds Park on a daily basis, and he enjoys the views of rolling farmland and pastures, scenery that he does not want to see obstructed by solar panels.

“I walk the park just about every day, and the solar panels will affect our view,” Compton said. “That’s our gateway to Halifax County and South Boston. We have people from outside Halifax County come to the Speedway. We use the fairgrounds for the Heritage Festival and other events. Do we want people to see a solar farm right there?”

Bill Short, director of parks and recreation for Halifax County, expressed his concern that the solar facility might infringe on the county’s future expansion of Edmunds Park.

Additions to the park is something Short would like to see happen in the future, and he said he does not feel the buffering between Edmunds Park and the proposed solar facility would be adequate to obstruct park visitors’ view of the solar panels.

“If there were other amenities that we wanted to put in the park, that is one thing that would hinder it in the future,” Simpson said.

Siao responded to Simpson’s remarks by saying his company would be willing to make the screening a condition of the commission’s approval of the special use permit for the solar facility.

“We’re happy to collaborate with all of you,” Siao remarked.

Simpson also urged the planning commission to consider what both the county and the town stand to gain from potential development of the land in question.

He noted that since residents of the town of South Boston pay taxes to both the town and to Halifax County, the county would benefit from a residential development in that area in the form of real estate tax dollars.

If the land is used for a solar facility, the county will not benefit financially, Simpson pointed out.

Claiborne commented that the revenue the solar facility would generate is “not enough” for her to vote in favor of it at this time.

Siao shared with the board that the solar facility would generate $7,200 in revenue for the town of South Boston in the first year and $231,000 in revenue over the 25-year shared program.

Claiborne, along with other planning commission members, also expressed their opinion that while they are in favor of clean energy, they do not think the proposed location of the solar facility next to Edmunds Park and across the street from the Halifax County Fairgrounds is the right place for that type of project.

“We just need to look for another site,” Claiborne said.

She added she could understand why the neighbors did not want a solar facility located near them.

“I would not want solar panels next door to me, period,” Crowder said.

Commission member Fields Thomas urged the board not to discount the potential benefits of solar facilities for South Boston and Halifax County.

“I think no doubt this may be the wrong location for having something like this, but certainly there would be some advantages to the county and we should not overlook those,” Thomas commented.