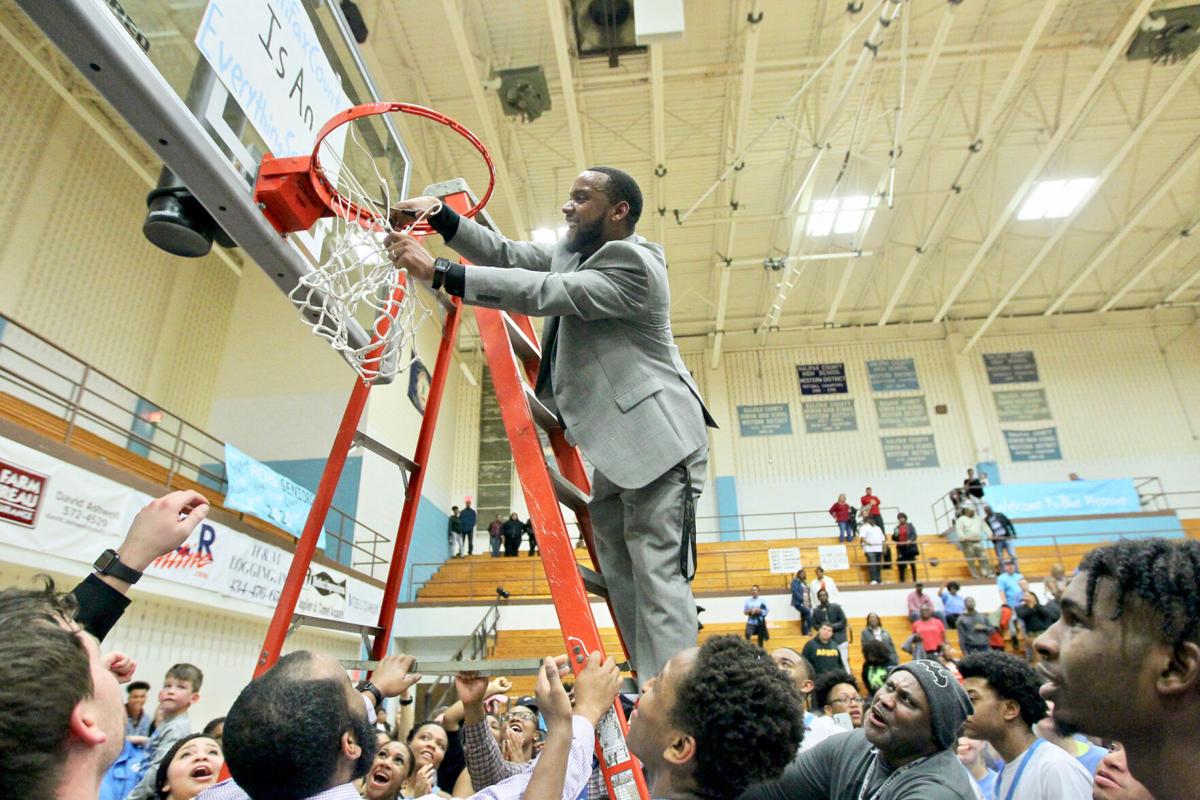 Halifax County High School boys basketball coach Sterling Williams cuts down the nets after his team captured the Region 4D championship with a dramatic last second win over rival GW-Danville back in February. 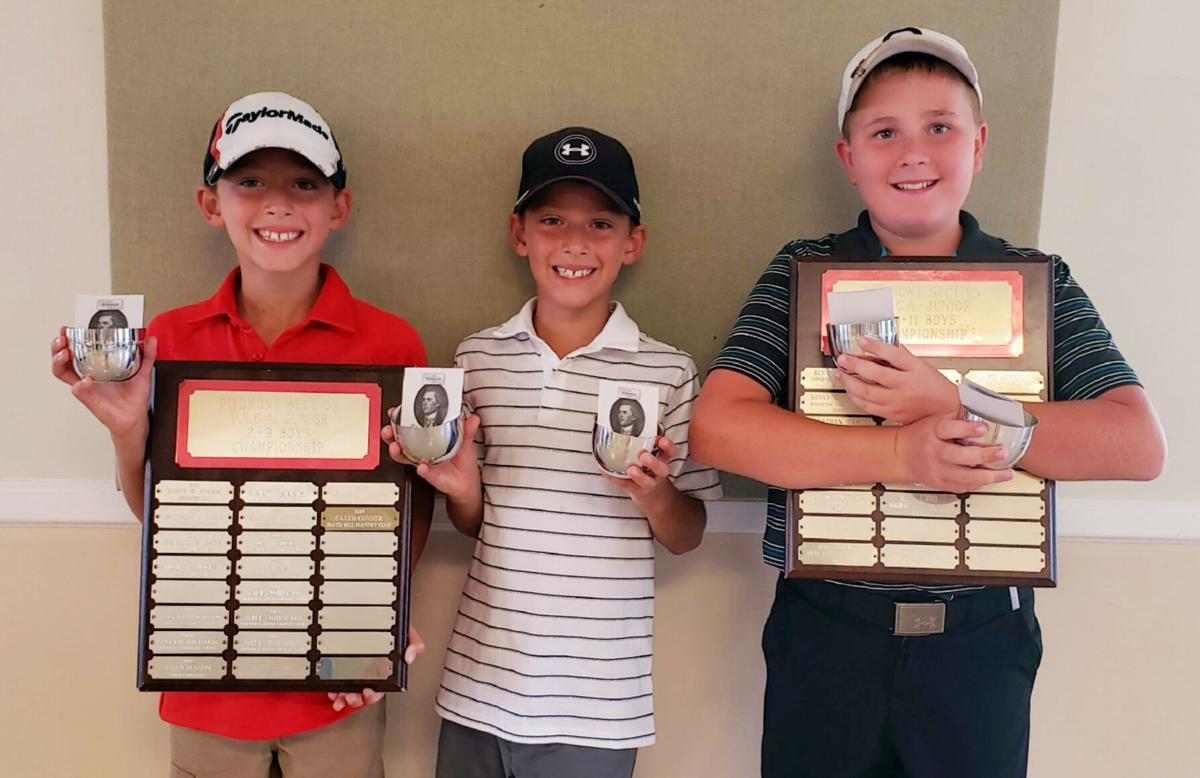 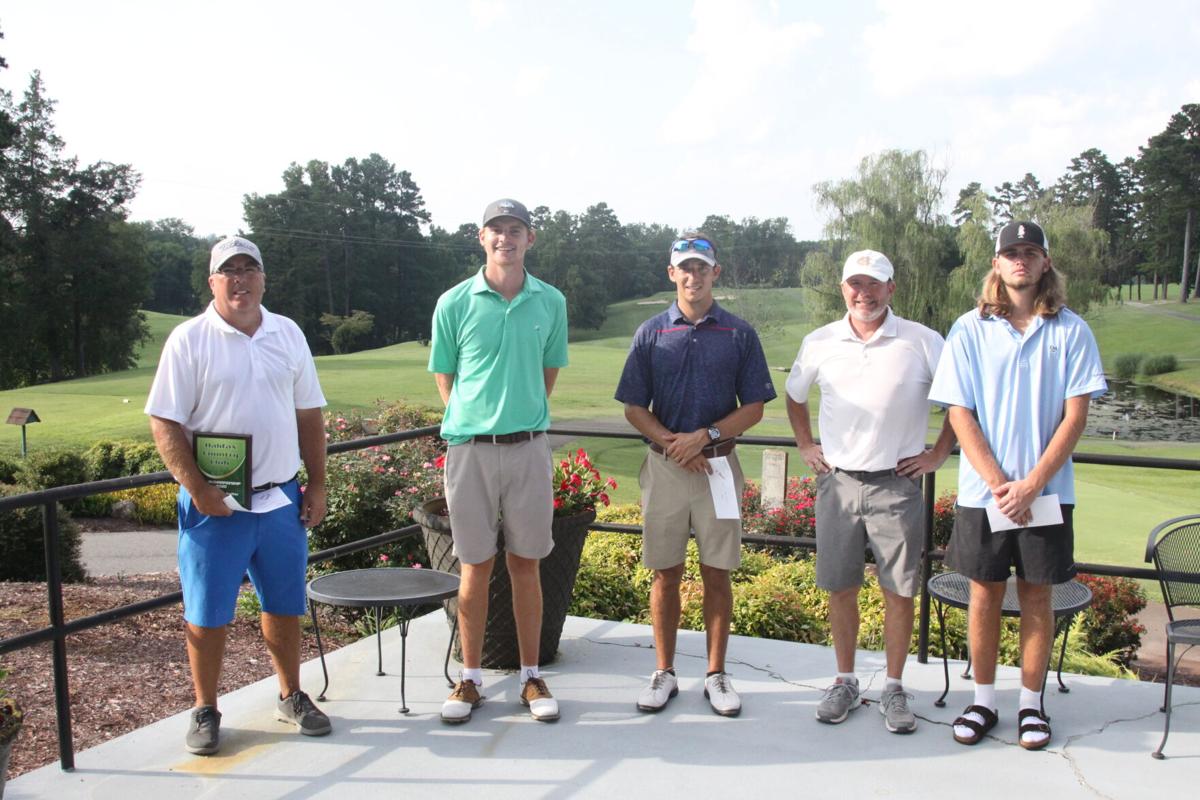 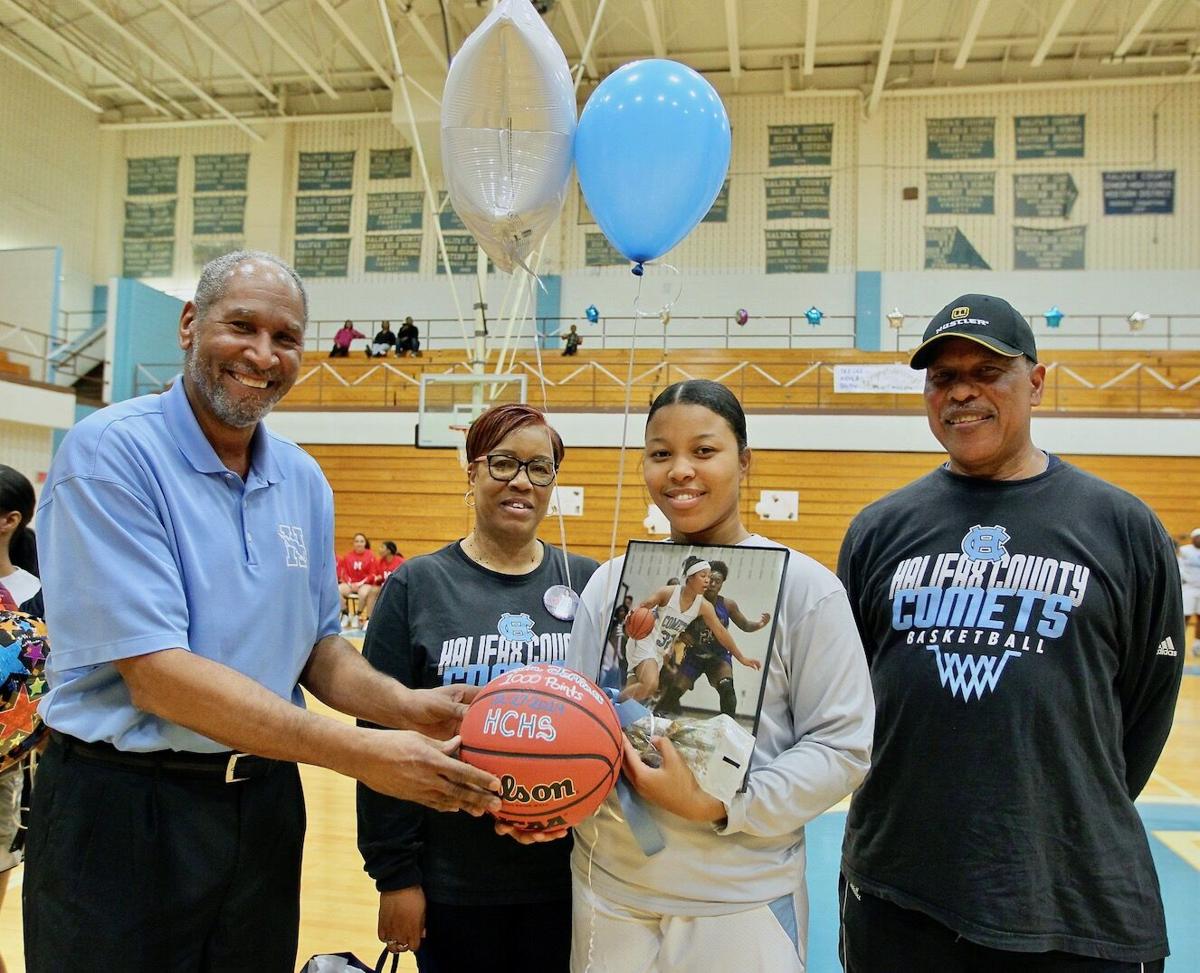 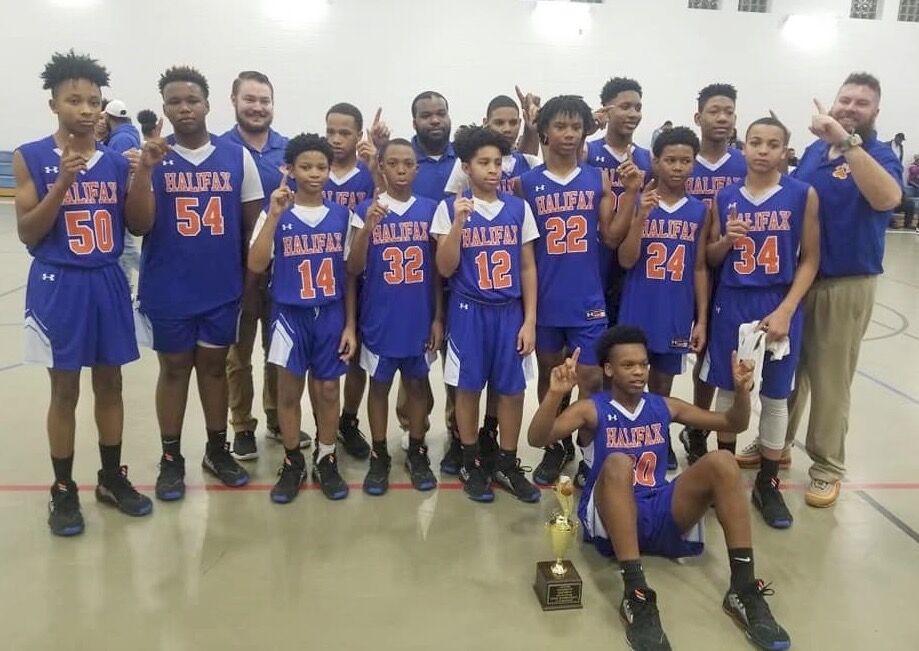 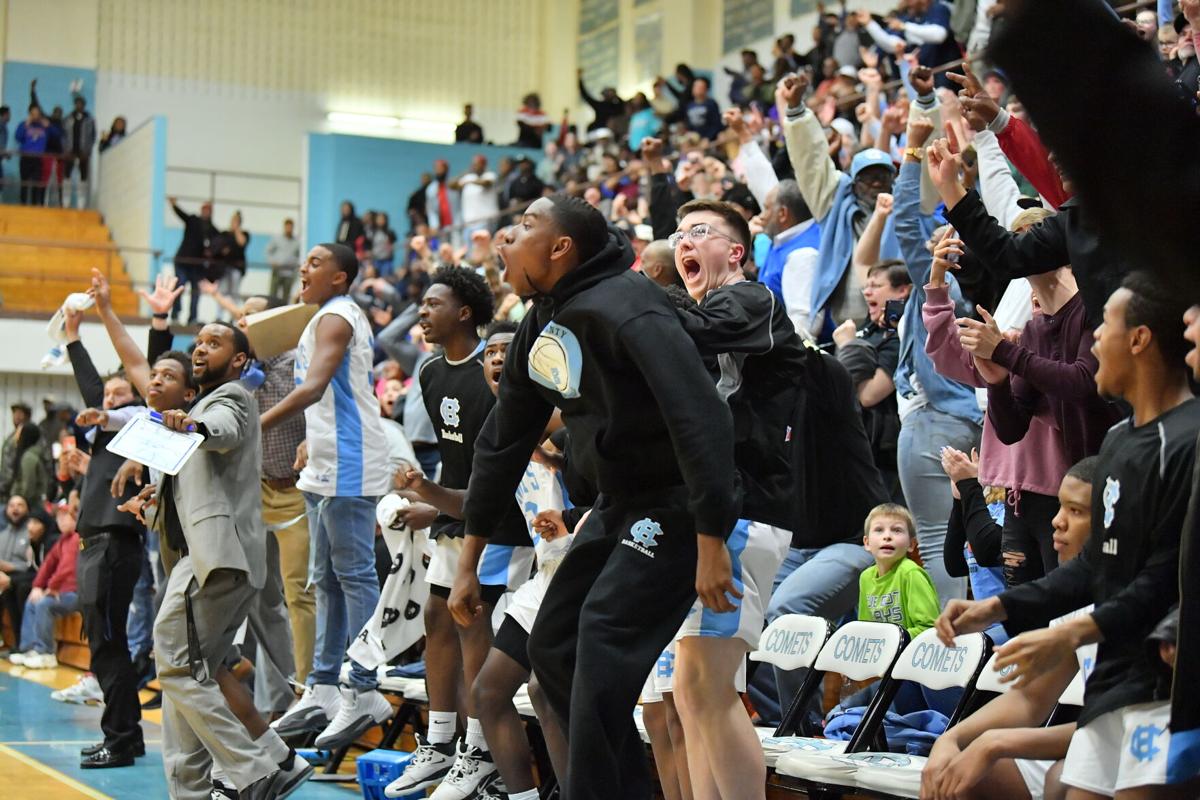 The bench erupts in celebration as they watch Kevon Ferrell’s shot go in at the buzzer to win the Region 4D Championship. 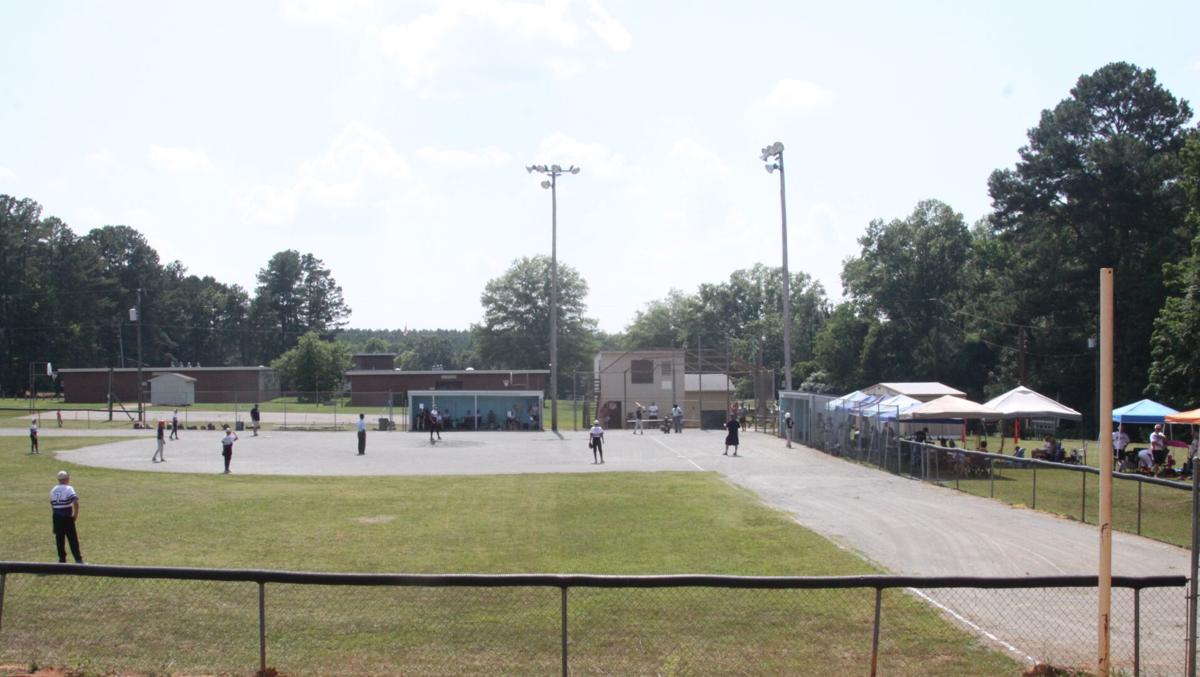 On July 4 weekend, NC GameOn Sports played at the original Cluster Springs ball field for the first time in over 20 years. Steve Bryant has brought the original field, as well as the newer fields back to life recently. 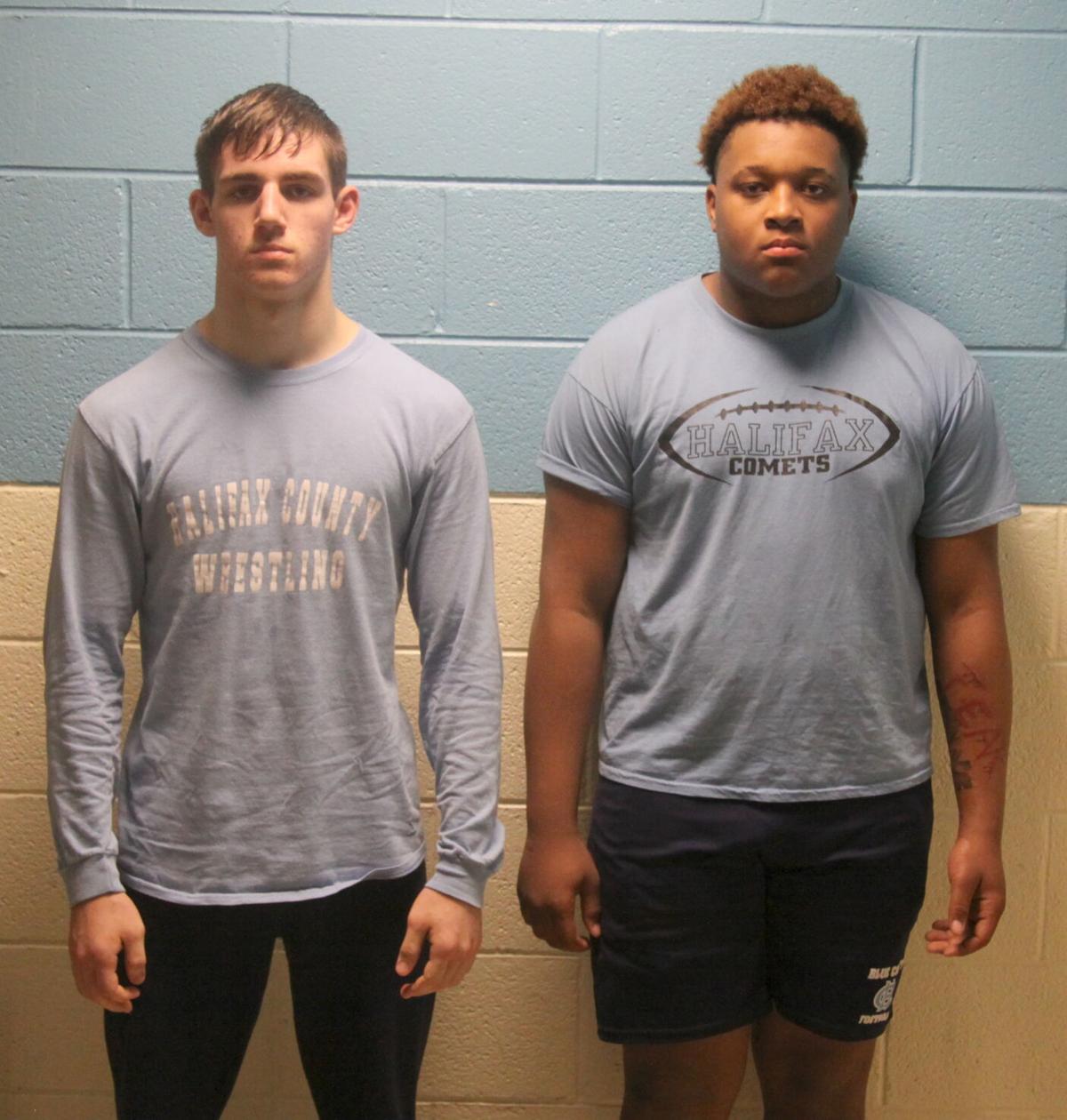 Alex Driggs (left) and Zyon Wilson qualified for the Class 4 state wrestling tournament in February after both wrestlers finished second in their respective weight classes.

As 2020 ends and 2021 begins, The Gazette-Virginian looks back on the past year in the sports world in Halifax County.

It was a year that no one will soon forget and a year that saw a normally busy local sports schedule turned into a sparse year with numerous events and games canceled due to the COVID-19 pandemic. Regardless of the situation, there are still a number of things to look back on and celebrate in 2020.

The boys basketball team returned to the Virginia High School League State Tournament, finishing the season with a 22-5 overall record and a 10-2 record in the Piedmont District. The team started the season 14-0 before losing three straight games in late January. They followed up the losing streak by winning their final four games of the year to secure a regular season district title, the first seed in the district tournament and the top seed in the regional tournament.

After a win over Magna Vista, the Comets faced Martinsville in the district championship game where they were beaten on a last second shot by the Bulldogs. They entered the regional tournament as the top seed and had home court advantage throughout the regional tournament. After an easy win over Pulaski in their first game of the tournament, Halifax faced E.C. Glass out of Lynchburg with a berth to the Class 4 state tournament at stake.

Down by 11 at halftime, the Comets roared back in the second half to defeat the Hilltoppers 62-61 in front of the Comet faithful. The win secured the Comets a spot in the state tournament, but they still had one task remaining: a regional championship game against rival George Washington-Danville.

In a game that will be remembered for years by both fan bases, the Comets won the regional title by a score of 56-54. Kevon Ferrell drove the lane with time expiring and put up a shot that banked in as the final buzzer sounded to set off a celebration for the ages.

The Comets scored seven points in the final 29 seconds of the game to cap off another historic season. Head coach Sterling Williams and his assistant’s: Nathan Lantor, Mario Sadler and Hakeem Pettus have put together a program that has now had back-to-back state tournament appearances, a feat that had not been done in nearly 40 years.

The Lady Comets basketball team finished their season 17-7 and a third place finish in the Piedmont District at 7-4. They started off their season 8-0 before falling to Person in The Gazette Virginian Holiday Classic title game.

The Lady Comets earned a home game in the Region 4D tournament and played host to Salem. In a hard fought back and forth game, the Lady Comets eventually fell to Salem 68-65 in overtime that ended their season.

Another highlight of their season was senior Dee Dee Jeffress amassing the 1,000-point mark early in the season. Jeffress was a four-year starter for the Lady Comets who also was named to the first team all-district and all-region team in each of her four years on the team.

The Halifax County High School swim team also brought home hardware in their 2020 season, with the girls capturing their fourth district title in a row and the boys winning their third title in four years.

They won their district championships at the meet at Hargrave Military Academy. Comet swimmers placed first in 14 total events at the district meet, and 11 more finished in second place.

The Halifax County Middle School boys basketball team also won a district championship in 2020, their first since moving to the Junior Piedmont District. The Lions beat Westwood 55-51 in the championship game to claim the title.

After the state tournament in basketball concluded, the focus turned to spring sports in Halifax County. The middle school was able to get several regular season games in, with the boys and girls soccer teams and softball team all sporting undefeated records early in the season. The high school teams were finishing up their last scrimmage games and heading into the first week of games when everything came to a screeching halt.

The VHSL originally postponed the spring sports season for two weeks after the coronavirus started spreading throughout the United States. Shortly after the decision by the VHSL, Virginia governor Ralph Northam closed all schools in the state for the remainder of the school year, ending the possibility of a spring sports season.

It was a tough decision that had to be made amid the ongoing pandemic, but it was still heart breaking for the players and coaches, especially the seniors that missed their final year of high school sports.

The Halifax Country Club junior golfers were big winners in the Southside Piedmont Junior Golf Association’s season over the summer. Brady Grant was the 7-9-year-old division champion and Owen Mason was the 10-11-year-old champion at the championship matches held at the end of the season.

Jackson Grant, Owen Mason and Alex Payne also were awarded the sportsmanship award for their age groups at the championship matches.

Travel baseball spent considerable time in the county over the summer, when NC GameOn Sports moved their operations to Cluster Springs Ball Park and the Day Complex due to restrictions in North Carolina.

Steve Bryant spent a lot of time and money fixing up the fields at Cluster Springs, and the July 4 weekend tournament at the ballpark was the first games played on the original Cluster Springs field in over 20 years.

The tournaments brought teams from all over Virginia and North Carolina to the county throughout the summer, bringing in much needed extra revenue from the teams. Some weekends saw over 50 teams competing in the county, which meant a large portion of them staying for the weekend.

For nearly every weekend from July 4 through mid November, NC GameOn Sports held a tournament in Halifax County.

In late October, Halifax County High School named Rob Senseney as the new head coach of the Blue Comets football team, after the retirement of former head coach Grayson Throckmorton a couple of months prior.

Senseney came from Clayton High School in North Carolina. He also won two state titles while he was the head coach at Gretna High School.

Sports returns as calendar turns to 2021

2020 was a year for firsts. A year that saw things happen that many would have never thought, but through all of the hard times, through all of the postponements, cancellations and unknowns, Halifax County still had a great year in sports.