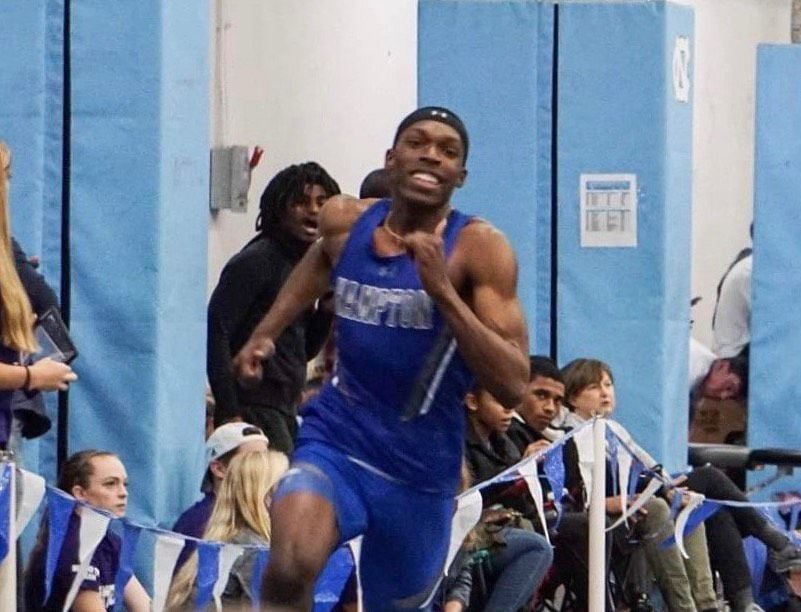 Otis Slayton competes during an event earlier this year at Hampton University. 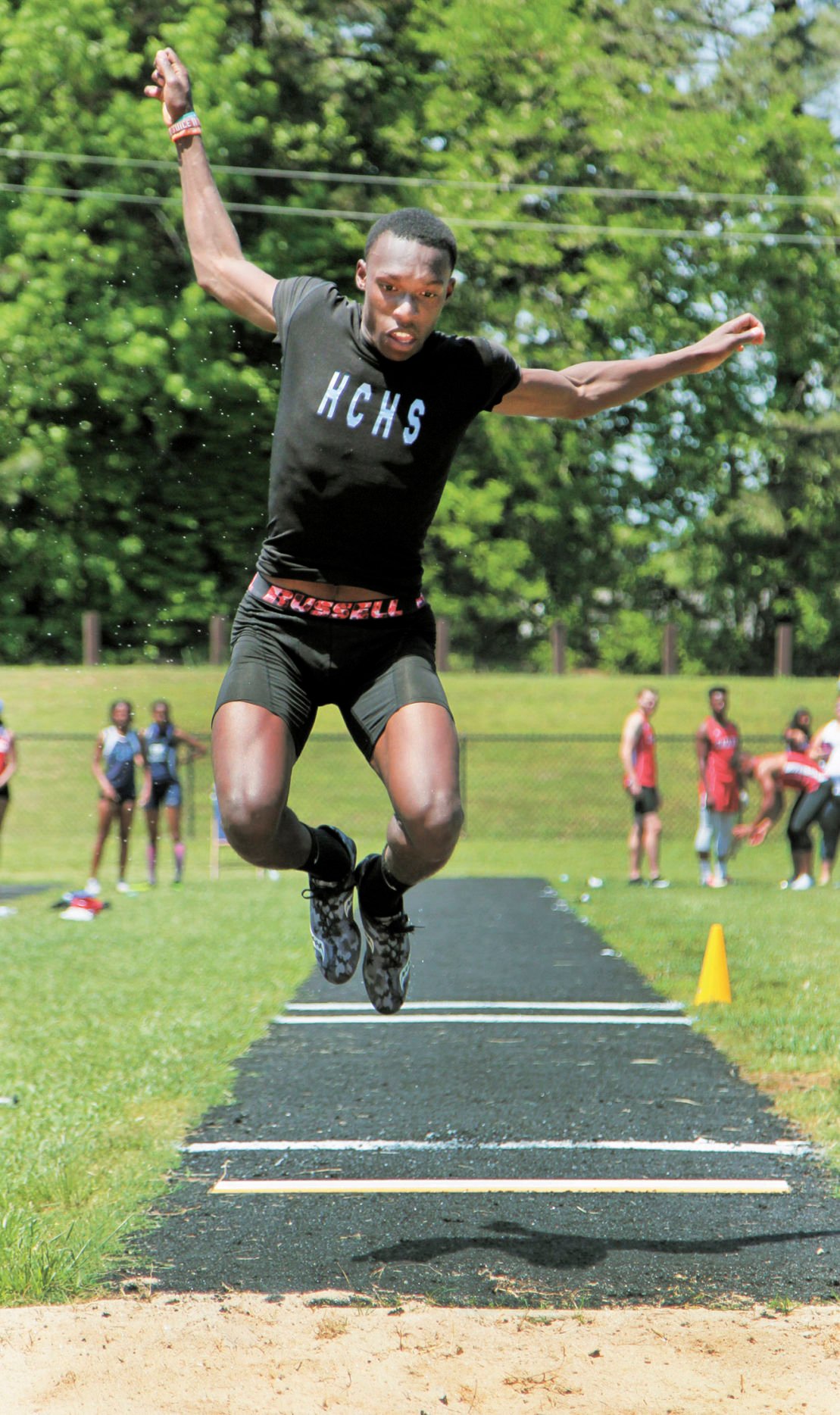 Otis Slayton competes during an event earlier this year at Hampton University.

Otis Slayton Jr. laid in his bed after having surgery for an ankle broken in three places, along with several ligaments being torn wondering if his plan he had worked so hard for was crumbling.

The thoughts running through his head during the eight weeks he was at home away from school, and away from sports, were not good sometimes. But Slayton decided there would be no time for sulking, and he would not let this end what he had envisioned growing up.

He would get back to where he wanted to be.

Slayton grew up playing basketball from an early age. From the time he was 5 years old he was always playing basketball and really loved it. Then he started playing football when he was in third grade. It wasn’t until middle school, with a little persuasion by his mother, Lisa Slayton, that he would pick up track and field. That decision would get him a partial scholarship to Hampton University mere days before he was going to enroll at a much smaller school.

Slayton’s story is one of perseverance, of heart and of faith. When he moved from the middle school to Halifax County High School, the football coach told him he wanted Slayton to play on the varsity team as a freshman. After what he described as a “phenomenal” eighth grade year, Slayton was up for the task.

It was the last game of the football season, the biggest game of the year. The rivalry game that pitted Halifax against George Washington-Danville. The stands were packed in Danville, and Slayton was tasked with playing safety on defense as one of the other starting safeties was out with an injury.

“I was playing one of my best games all year,” Slayton recalls about that game. At 5-foot-10 and only 145 pounds, the freshman was much smaller than most of the players he was up against. The Blue Comets were playing a cover three defense, and that meant that Slayton was the last line of defense as the safety. Slayton went for a tackle on a GW player when all of a sudden he was blindsided by another player.

It was in that moment that Slayton’s life would change. “I felt three loud pops in my ankle. It was obviously broke, I couldn’t move it,” he said.

Slayton was taken to the hospital where he was told that his ankle was broken in three places and had three torn ligaments as well. The injury required surgery, followed by eight weeks on homebound to recover and then four weeks of rehabilitation to regain movement in the foot.

Slayton credits this time as the period in his life where there was his biggest potential growth.

“Just have faith, put your head down and go through it,” he said. “Keep going. Keep pushing.”

He also knew following the injury he wasn’t what he was before.

“Things were not the same. I wasn’t as gifted athletically as I was before the injury. I wasn’t as fast, and I had to work twice as hard every day,” Slayton said. “There would be some days where I would just go out and run.”

As his ankle got back to as close to full strength as it would get, Slayton went back to playing sports. After missing his first high school track season due to the injury, Slayton took on the challenge and was rewarded with a trip to the state track and field championships in the long jump. He competes regularly in the long jump, triple jump, 4X100 relay, 100 and 200 meters, but the long jump is where he excels.

Slayton continued to play football and basketball, even earning prestigious honors at several top basketball camps when he was 16 years old.

Slayton attended the U.S. Sports Camp Nike Complete Skills Basketball Camp in Lexington, South Carolina, where he was named the MVP of the camp. With being named the MVP, he was invited to the Elite Hoops Basketball Invite Camp where out of 150 attendees, he was named one of the Elite 11. From there he was invited to the Scoutsfocus.com Elite 80 Camp.

In his junior year, Slayton continued to improve in track and field, finishing sixth in the state in the long jump and seventh in the triple jump. In the district tournament he was the top male scorer with 36 points. Slayton won three events and was third in another in that tournament. He also won three gold medals and a silver medal in the Commonwealth Games that year. Slayton won gold in the long jump, triple jump and 4X100 relay and won silver in the 100-meter dash.

Slayton also set the school record his junior year in the long jump when he jumped 23 feet, 11 inches at the Division 5 Region D championships.

Before his senior track season started, Slayton finished his football and basketball careers on high notes. He was a member of the regional champion basketball team that made it to the state tournament for the first time in over 40 years.

He also was awarded the Blue Comet Pride Award for Sportsmanship for the football team at the fall sports banquet, along with the National Burlsworth Character Award. That award is named after Brandon Burlsworth who walked on at the University of Arkansas. Burlsworth had no scholarship offers and no one knew of him, but through his hard work and dedication he became an all-American and was drafted 63rd overall in the NFL draft. Burlsworth died tragically in an automobile accident only 11 days after the draft.

The award is given out nationally to a player that exhibits outstanding character and sportsmanship. Their website states that the award is given to a “player who represents the ideas and values that Brandon Burlsworth had: to give 100% on the field and to stand as a moral example to his team.”

Slayton still doesn’t know how he was nominated for the award and says that he was shocked when he heard his name called for it. He credits what he went through his freshman year with the injury on his mindset change and how he began to exhibit all of the qualities that the award is given for.

Slayton was the only Comet that went to nationals that year and when he arrived he realized that he didn’t have anyone to help him get his mark, so he knew where to jump from in the event. It was then that Slayton got his mother Lisa’s attention in the packed stands. “I was waving my hands, and I had to yell at her across the track,” he said. From her spot in the stands, with other events going on all around them and the fans loudly cheering on their favorites, Lisa helped Slayton get his mark so that he could be prepared for his jump.

“She is just a phenomenal mother,” Slayton said. “She and my father and my whole family are the reason I am the person that I am today,” he added.

Slayton would finish 18th in the long jump at nationals and from there he was looking toward the future. As the days started ticking away before the start of college, Slayton only had offers from several smaller local colleges to come run track. He knew that his statistics spoke for themselves, but he wasn’t getting the responses he had hoped for. That’s when one of his former coaches, Darius Jennings stepped in.

The time to decide his future was inching close, and Slayton had still not heard from any bigger schools that he wanted to hear from. Then one night Slayton, his mother Lisa and little sister Olysia were sitting down for dinner at Applebee’s and discussing his plans for college when a text came in on his phone. It was the head track and field coach at Hampton University. The coach told Slayton they were interested and could possibly get him a partial scholarship and get him on the team.

“I was so emotional,” Slayton said. “I started tearing up, I got a chance and that is all I wanted was just one chance,” he added.

The coaches at Hampton and Slayton began talking back and forth on the phone, and he was offered a partial scholarship to come and be a part of the track and field team. Due to time constraints Slayton had to sign his letter of intent online and never got an official signing day or official visit to campus.

Slayton stressed the importance of having good grades and getting a good education starting freshman year. “That was one of the biggest things that helped me,” he said. At Hampton Slayton was required to have a 3.3 grade point average to be accepted, even with his scholarship so he saw firsthand what it means to earn good grades from the start.

“Start getting good grades early because if you start getting them early and get a solid foundation it is not as hard and is easier to get recruited,” Slayton mentioned.

Arriving on campus was a culture shock for Slayton who is a self professed “small town country boy from Halifax.” It was an adjustment for the first few weeks, but things fell into place quickly. “One thing I promised myself before I left was that I would not change who I am to fit in. That’s the one thing I didn’t want to do,” he said. He held himself to that promise and began to adjust and get the feel for life at a big university.

At the Liberty University Kickoff event, Slayton set a personal record of 24’1.5” in the long jump to win first place. In the Big South Championships he placed fifth in the long jump and seventh in the triple jump.

In the Dick Taylor Carolina Challenge at the University of North Carolina, Slayton finished second in the long jump and third in the 200-meters.

Slayton’s performance at Hampton this year has him close to earning a full scholarship that will pay for the rest of his education while he is there.

“Through all of this God was the main focus and the only reason I was able to get through. You just have to go with what you have, whatever you get make the best of it and just have faith.”