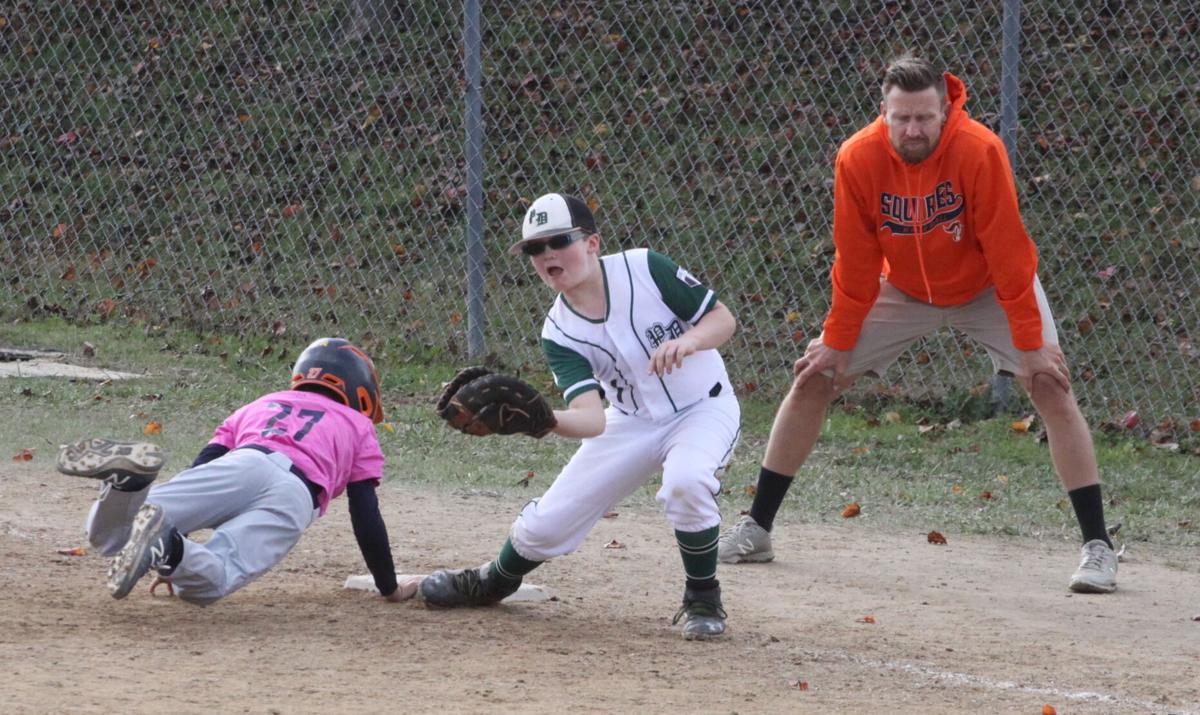 Ryder Milam (pink jersey) dives back to first base safely as first base coach John Conner looks on in Sunday’s semifinal game in the GameOn Winter World Series. 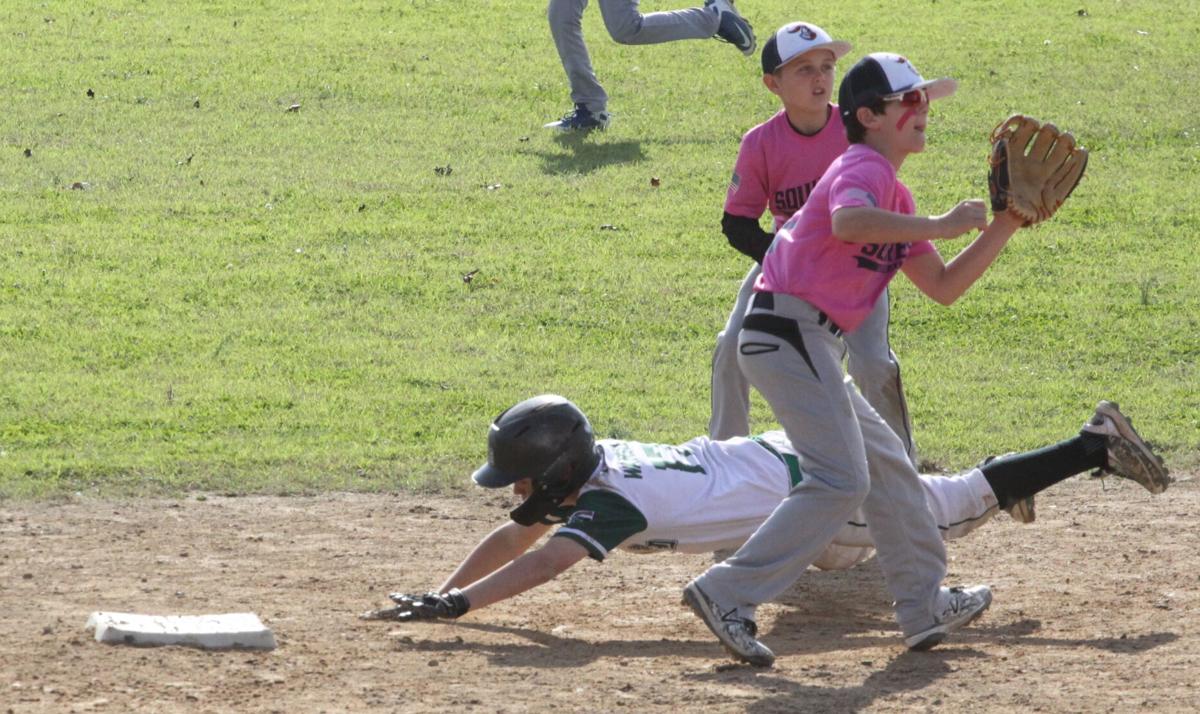 A Purpose Driven player slides headfirst safely into second base during the 11U division semifinal game on Sunday afternoon. 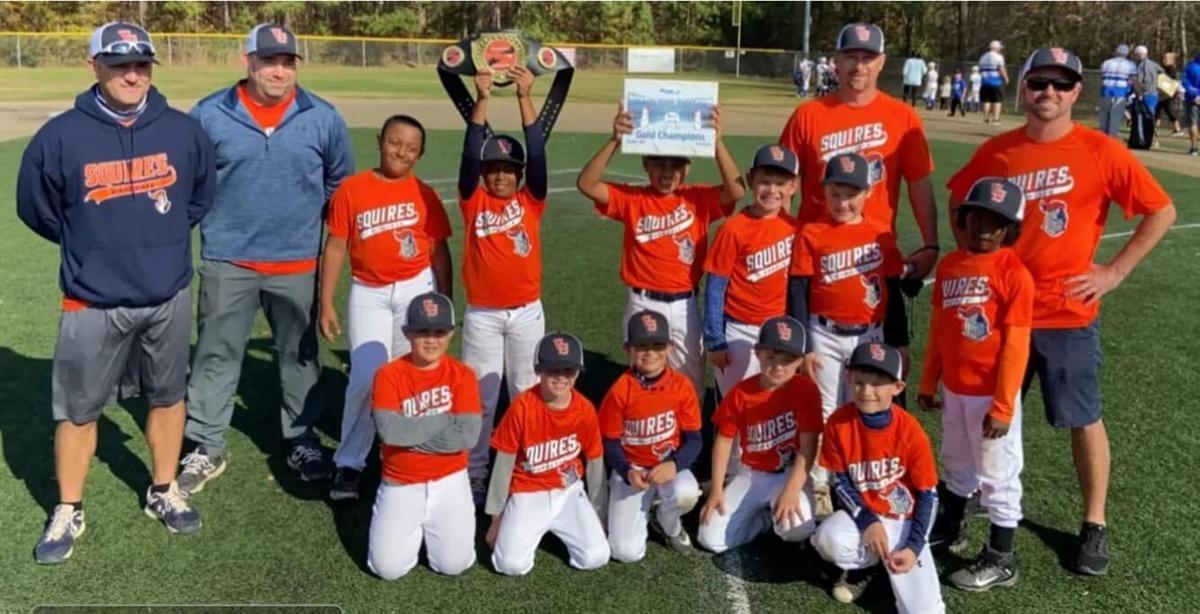 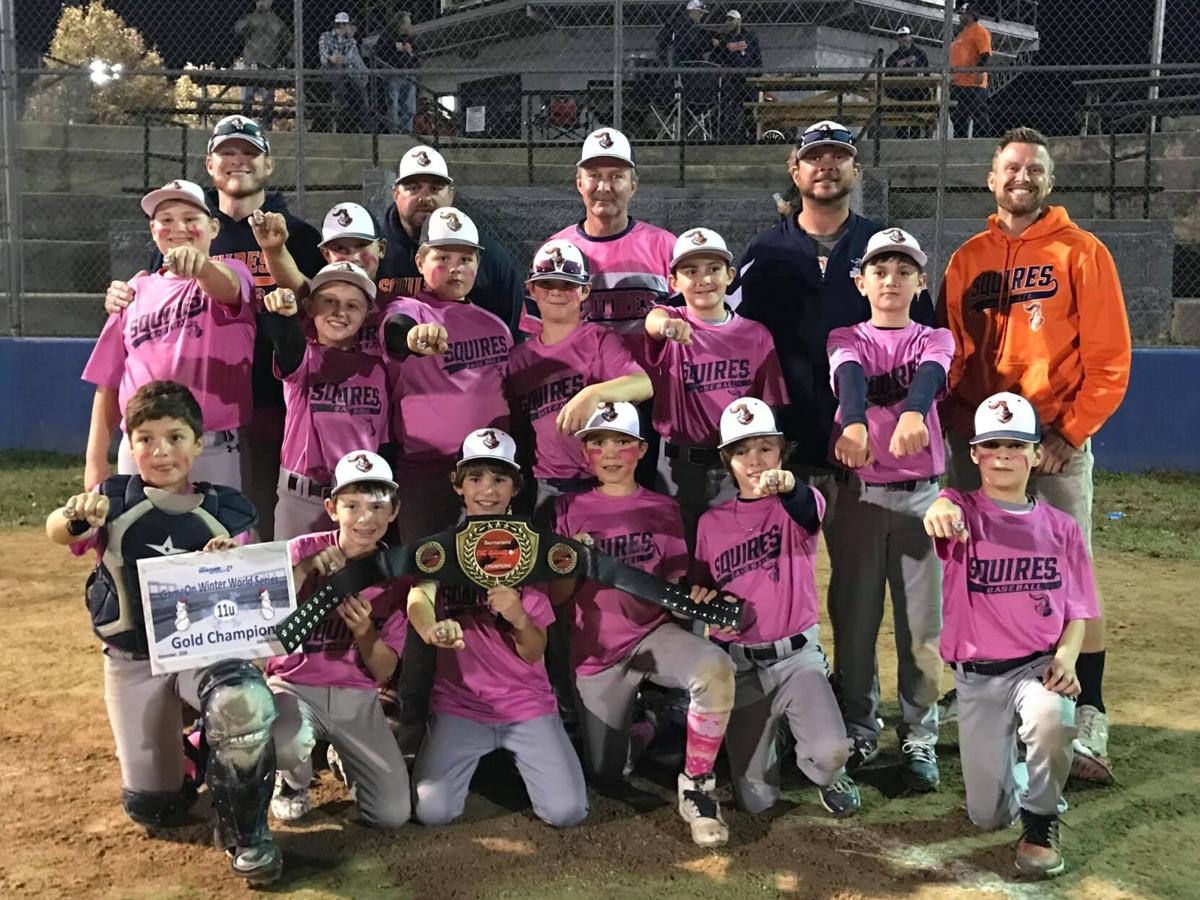 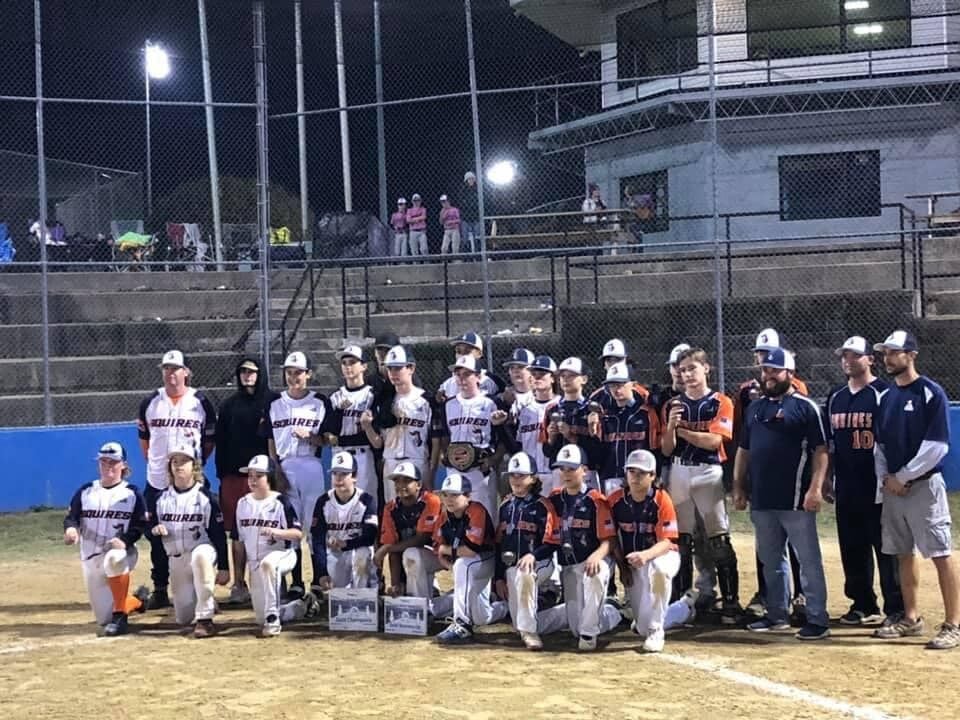 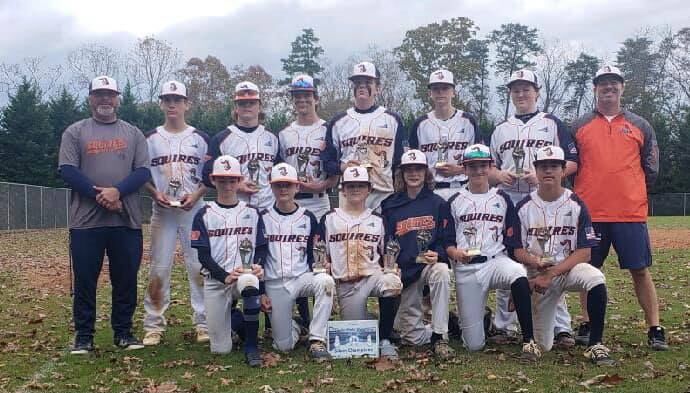 Ryder Milam (pink jersey) dives back to first base safely as first base coach John Conner looks on in Sunday’s semifinal game in the GameOn Winter World Series.

It was a banner weekend for the Virginia Squires Baseball group as four age groups claimed championships and one team finished as runner up at the NC GameOn Sports GameOn Winter World Series. Teams that claimed titles were the 8U, 11U, 13U and 14U teams, and the 14U Squires Orange team finished as runner up to the Squires Navy team. It was the final travel baseball tournament of the year and the Squires made the best of their final opportunity by adding plenty of hardware to close out the season.

The 8U Squires traveled to Southwest Forsyth for the 8U D3 division. They went undefeated in pool play and their run differential gave them the number one seed in the gold bracket out of 13 teams in the division. They faced off against Camel City baseball in the gold bracket semifinals and easily won that game 13-5 putting them in the championship game against the second seeded Dash City. The Squires pulled out an 11-7 win to claim the gold bracket championship and came home with a plaque, championship belt and rings for each player. Coach Justin Saunders said that the team has come a long way and that they worked very hard to achieve this goal.

The 11U Squires also earned the top seed in the championship bracket by going undefeated in pool play. They defeated Purpose Driven 6-5 in the semi finals to advance to the championship game.

The 11U Squires jumped out to an early 5-0 lead after one inning. Two walks and a sacrifice bunt for a single loaded the bases with no outs. Layne Satterfield walked to bring in a run, followed by a Wesley Glover double that scored two more runs to bring the score to 3-0.

Satterfield scored on a wild pitch and Kaden McClleland singled to score Glover to give the Squires a five run cushion early in the game. Things would settle down until the fourth inning when Purpose Driven scored two runs and the Squires added one. Heading into the final inning the score was 6-2 Squires but Purpose Driven wasn’t done.

Two walks and a single loaded the bases for Purpose Driven with no outs in the inning. A single scored a run to make the score 6-3. An error, followed by a ground out scored two more runs and Purpose Driven was within a run with only one out in the inning. McClelland was then able to get the next two batters to strike out and the Squires advanced to the championship game.

In the championship game the Squires had even more excitement, as the score was tied 3-3 as they headed into the top of the seventh inning against Rise Red. After the first batter of the inning struck out, the next two batters for the Squires walked and advanced to second and third when Ethan Conner grounded out to score Luke Ashwell from third to take a 4-3 lead with two outs in the inning. Caden Milam singled to score McClelland and Will Payne scored on an error to give the Squires a 6-3 lead. Nathan Irby put Rise Red down in order in the bottom of the inning to give the Squires the win and the championship.

In the 13U division there were 11 teams battling it out for the gold bracket championship and when the dust settled, it was two Virginia Squires teams going against each other for the championship. The Squires Navy and Squires Orange came into bracket play on Sunday as the five and six seeds in the gold bracket, but they were able to knock off the top teams on their way to the championship game.

The Squires won the championship 11-3 and scored at least one run in every inning except one. They pounded out 15 hits in the game, led by Colin Mabe and Will Testerman that added three hits each. Nathan Centers added two hits and Junior Powell, Mason Lovern, Logan Smith, Paul Irby, Colin Kennedy, Lukas Newton and Jacob Runion each added one hit each. Mabe, Smith and Testerman had two runs batted apiece and Powell, Irby, Kennedy and Newton each had one. Irby went the distance on the mound for the Squires, going six innings, striking out seven and only walking one batter. He was only charged with one earned run on nine hits.