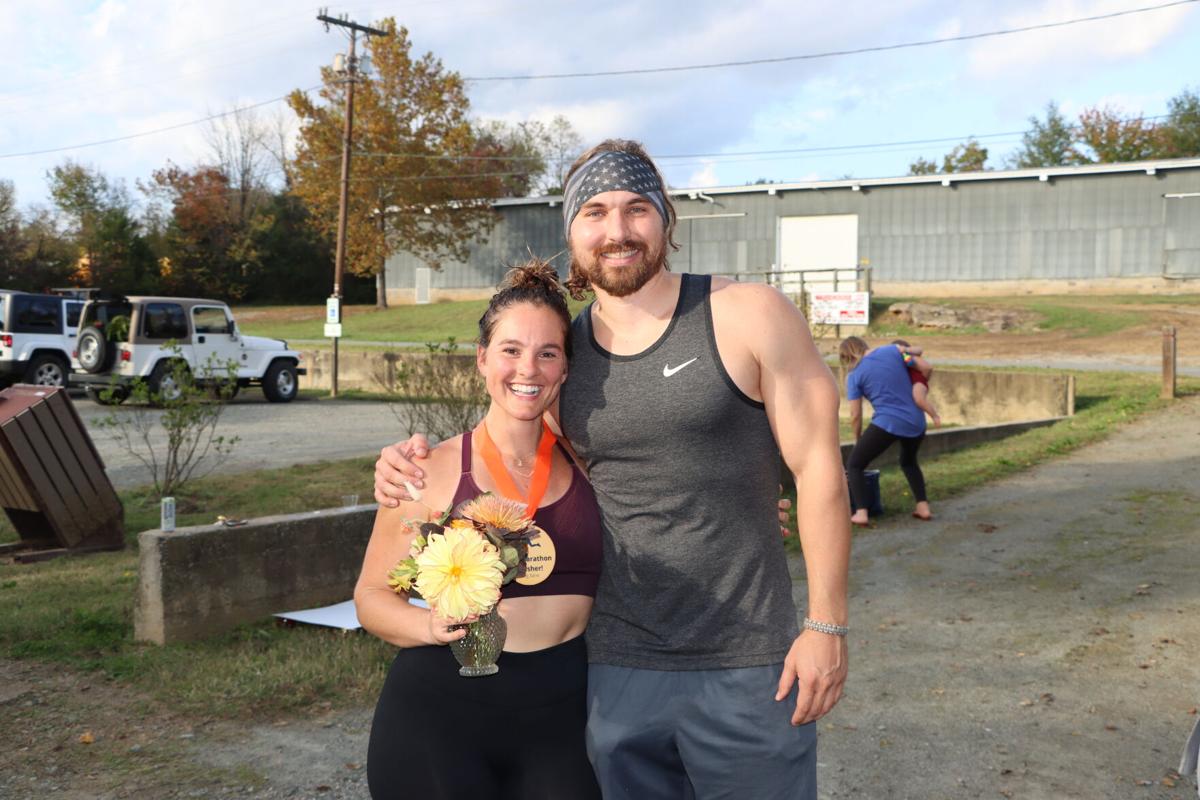 Meg Bane and Ryland Clark take a picture together after Bane completed the Richmond Half Marathon on a course in Halifax County. Clark ran the last 10K of the marathon with Bane. 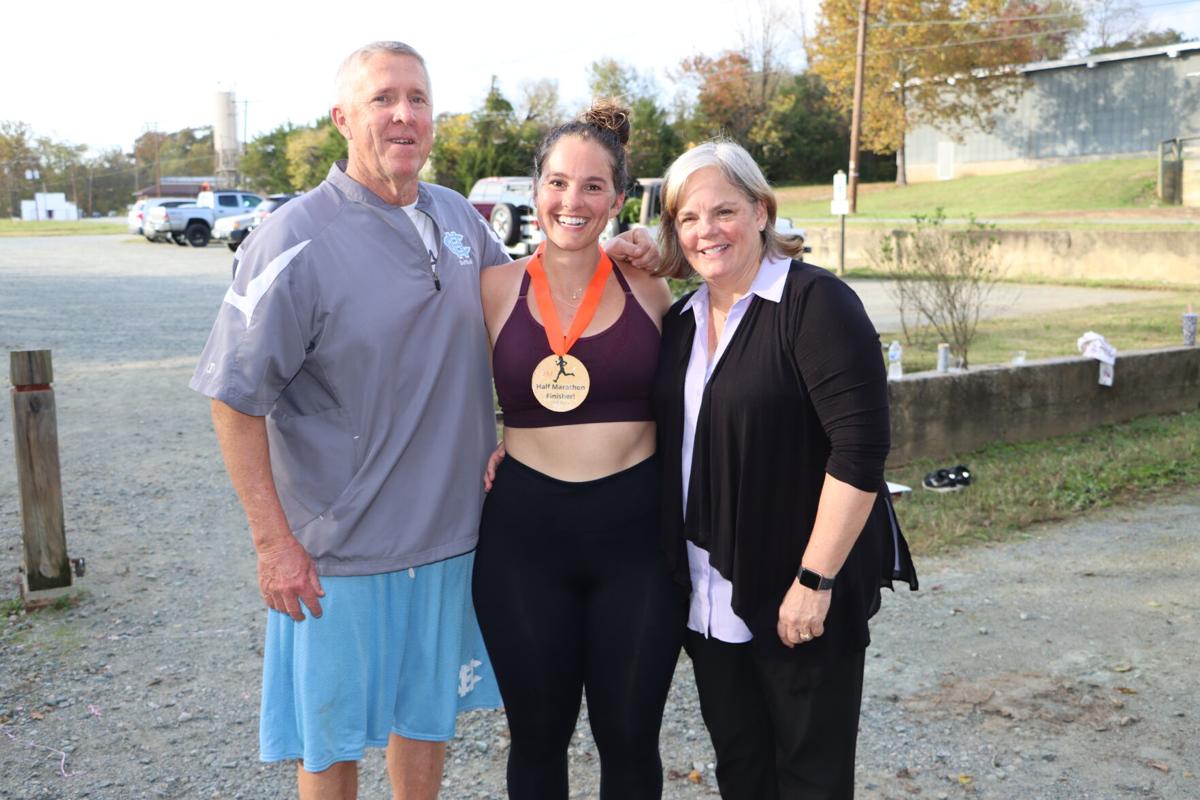 Meg Bane is congratulated by her parents Woody and Kathy after she completed her first half marathon. Bane ran in the Richmond Marathon virtually by mapping out and setting up a course in Halifax County.

Meg Bane and Ryland Clark take a picture together after Bane completed the Richmond Half Marathon on a course in Halifax County. Clark ran the last 10K of the marathon with Bane.

Meg Bane is congratulated by her parents Woody and Kathy after she completed her first half marathon. Bane ran in the Richmond Marathon virtually by mapping out and setting up a course in Halifax County.

Meg Bane and Ryland Clark were both used to heading to the Halifax County/South Boston YMCA daily to get in their workouts. They would see each other there while working out and became friends, but then COVID-19 swept the world and the YMCA temporarily shut down. With nowhere to go to workout, both Bane and Clark did what they could with the situation they were dealt.

Bane was out running inside for a work competition and it was through being friends on Apple Watch that Clark saw that she was running so he reached out to her. “It was what can we do for workouts because working out is essential for both of us,” Bane said.

Clark mentioned that Bane should begin running with him and in March, they started their runs. Bane is big into HIIT workouts. HIIT stands for High Intensity Interval Training. Clark describes the workouts as having really high-energy segments that also require a lot of strength effort. “When you add those two together it is tough but over time you learn the movements and the functions,” Clark said.

“I saw her doing some HIIT workouts and I didn’t know anything other than running outside of the YMCA so I asked her if she would help me with some of the HIIT workouts to stay active and I helped her with the running piece of it so we kind of traded,” Clark said.

Clark ended up losing 20 pounds by doing the HIIT workouts, and Bane was able to start running more and eventually decided to set a goal. That goal was to run the Richmond Half Marathon.

Growing up Bane played sports and was very competitive athletically and in the gym. She lifted a lot of weights and did HIIT workouts but running was always miserable to her. “I think a lot of it has to do with when you are growing up in sports, running was used as a punishment so for me it always had that negative connotation with it,” Bane said.

She started out with a mile and said that after one mile she was miserable, but without having an outlet at the YMCA she knew that she had to do something. With Clark’s help and constantly running she started building up miles in her runs and started to think about what her goal should be.

The Richmond Marathon this year was a virtual race due to the coronavirus pandemic which meant that Bane had to map out and measure the 13.1-mile route.

It wasn’t an easy goal to attain with a one-mile run being miserable; it would take a lot of training and help from her workout partner Clark to achieve that goal in a short time.

Working out is something that a lot of people struggle with, and sometimes with no accountability it can be easy to just skip a day or make an excuse to not go to the gym or take that run, but Clark and Bane have an outlook — that could be beneficial to those that are looking for that extra motivation.

“What is your why? Why are you choosing to do this,” Bane said. “What is your goal and what is your why behind it? Starting new things can be so hard and to start new routines and habits say why do you want to do this and what do you need to do to become the best version of yourself,” she added.

On race day Bane began her half marathon with the support of her family, Clark and her friends from the YMCA. Having that support system there while she ran her first half marathon was something that Bane will never forget.

“It was pretty awesome,” Bane said. “Throughout the whole training and even during the regular workouts, there is so much support in this community. The YMCA is such a strong foundation for my why,” she added.

Bane’s sister, Maggie, works at the Halifax County Chamber of Commerce and with the help from her coworkers she set up water and gel stations along the course and they made signs to help cheer Bane on as she ran the race.

She was thankful for that support and after she crossed the finish line, the celebration continued. “My family came out and at the finish line they had signs and the people from the YMCA came out and there was champagne and food and we all kind of just hung out for an hour and a half after the race and just enjoyed each other’s company.”

The obvious question for Bane after completing the half marathon would be if she was going to run a full marathon next, but she hasn’t decided quite yet what her next goal is going to be.

“I don’t know what my next goal is, naturally it would be a marathon if I want to keep going with my running, but I am kind of just enjoying the in between right now and I will decide and prioritize the next time I have a goal,” Bane said.

Clark and Bane still workout together and while she may not know what the next goal is or when it will be, staying consistent in workouts is something that Clark makes sure they both continue to do.

He was told a long time ago that the race is long but in the end it is always with yourself, meaning that being consistent and not comparing yourself to others is how to stay with the workouts and staying fit.

“Getting out of the car sometimes is the hardest part.”