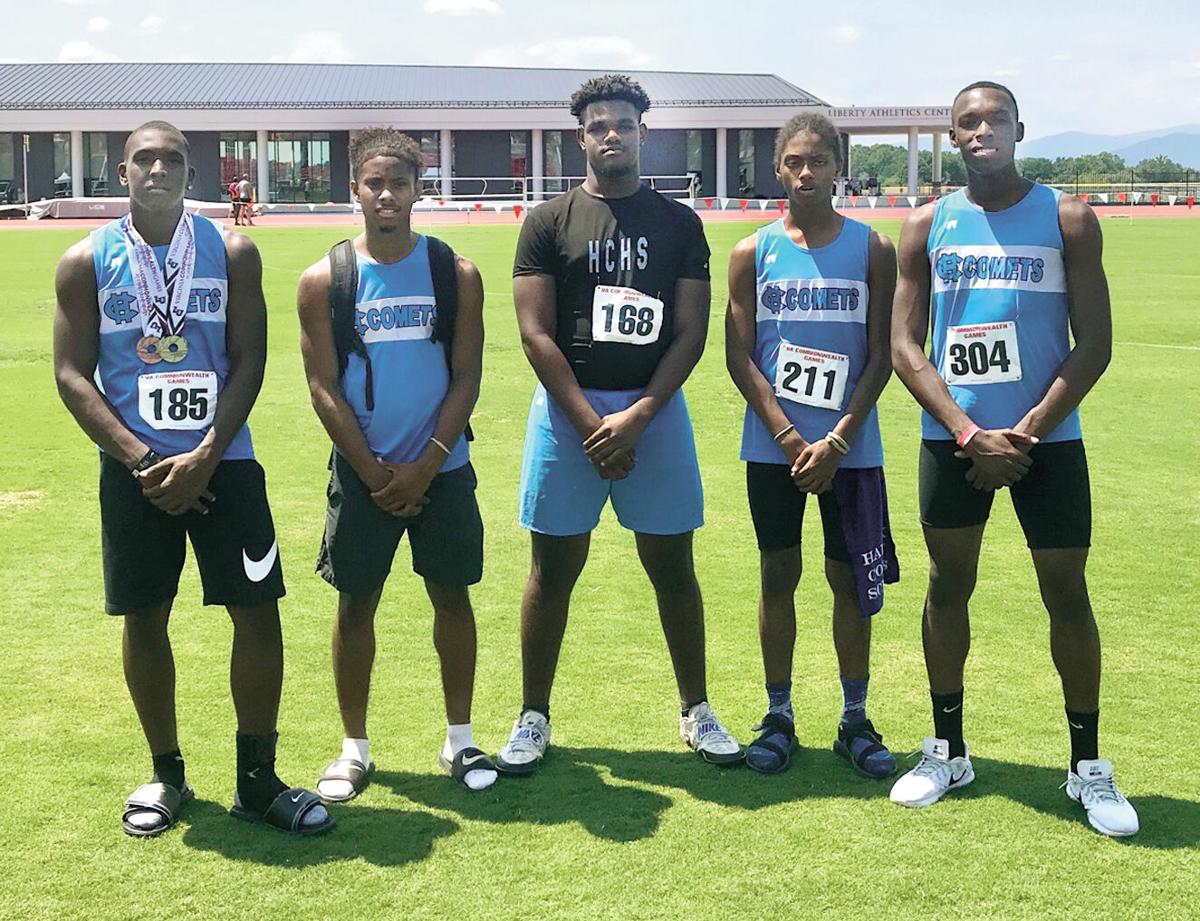 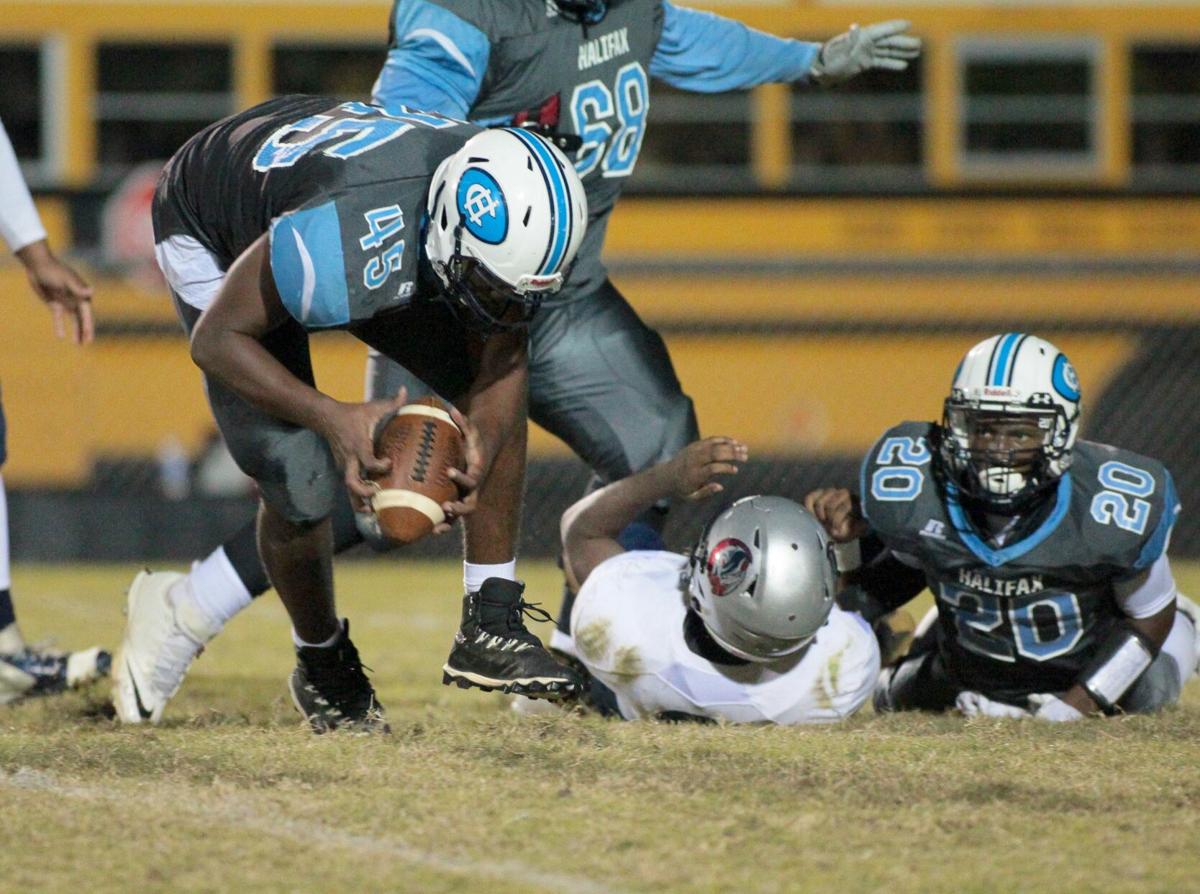 Halifax County High School’s Herbert Brooks (45) scoops up the football fumbled by a Magna Vista High School player following a hit from Comets teammate Kenneth Davis Jr. (20) and starts a 12-yard return for a touchdown late in the first half of an October 2018 Piedmont District game at Tuck Dillard Memorial Stadium.

Halifax County High School’s Herbert Brooks (45) scoops up the football fumbled by a Magna Vista High School player following a hit from Comets teammate Kenneth Davis Jr. (20) and starts a 12-yard return for a touchdown late in the first half of an October 2018 Piedmont District game at Tuck Dillard Memorial Stadium.

Herbert Brooks didn’t start playing sports until he was in the sixth grade.

When he joined the football team at Halifax County Middle School in his sixth grade season, he was relegated to fourth string outside linebacker. That didn’t deter Brooks who worked tirelessly and is now entering his second year at Virginia Military Institute (VMI) as a member of their track and field team.

As Brooks entered his seventh grade year, he was determined to continue working and improve as an athlete. Once he made his first tackle in a game, Brooks had the feeling that his hard work was starting to pay off.

“In seventh grade I got my first tackle ever and after I got that tackle in the game I said ‘I might be pretty good at this.’ So I started working and my eighth grade year I was offensive lineman of the year,” Brooks said.

But Brooks’ track and field career still had not taken off. When he tried out for the team his seventh grade year, he was cut. Still, undeterred he continued to work and made the team his eighth grade year. It didn’t take long for him to find his niche as a discuss thrower.

Brooks grew up idolizing his older brother, William, who was five years older than him. His brother was a phenomenal athlete who still holds several track and field records at Halifax County High School.

“I always looked up to him as an athlete,” Brooks said.

When he began track and field at the middle school, Brooks started to run the 400-meter dash, but soon realized that he didn’t have the speed that his older brother did. So he started throwing the discuss and ended up with a first place finish in the district championship meet.

Over they years Brooks looked up to two top athletes surrounding him on the football field and track and field. Brooks, Otis Slayton and Kenneth Davis.

“They (Slayton and Davis) were both hard workers, and they were naturally fast, and I had to work because I was a chubby slow kid,” Brooks said. “I would work with them and see what they were doing right and apply that to my game,” he added.

As he entered high school, Brooks wanted to try his hand at running again for the track and field team to follow in his brother’s footsteps, but like in middle school he found his home throwing the discuss.

While he had excelled as an offensive lineman for the middle school team, Brooks still had his sights on becoming a running back for the Blue Comets football team. Brooks asked his JV football coach if he could try running the ball on offense, but the coach said he needed him on the offensive line.

He never gave up on his goal of becoming a running back, and he achieved that goal in his sophomore season. Achieving that goal also helped Brooks mentally dig in, and he began working even harder.

“If I achieved being a running back, coming from fourth string outside linebacker to one of the two starting running backs then that is saying something and ever since then I took sports seriously. I always worked at it, I always stayed in the weight room and always paid attention to the coaches,” Brooks said.

Gregory Scott, Sherry Hall, Mary Douglas, Robert Thaxton and Halifax County High School principal Michael Lewis and the other assistant principals at the school all played an integral role in Brooks’ life as he progressed through school.

“The grades came because the teachers knew I was a pretty good athlete, and they wanted to see me do good and they helped me out a lot,” he said.

Brooks was able to make the first team all district football team his junior and senior year as a defensive end and also second team all district his senior season as a running back, closing out his final high school football season at the position he had strived for many years prior.

Brooks’ senior track and field season saw him win gold at the Commonwealth Games in Lynchburg, win the T.C. Watkins III award as the top male athlete at Halifax County High School and shatter the school record in the discuss throw.

Brooks set the record at the Golden Eagle Invitational track and field meet at Staunton River High School. The previous record, set by Treyquan Holt in 2015 was 160’ 7”. Brooks beat that throw by 10 feet, throwing 170’ 9”, beating his personal best throw of 152’ 9” by 18 feet.

He had several bad meets coming into the record setting throw, but he felt good heading into the meet. Bad weather and not executing had left him wanting more. When he stepped foot onto the field that day in May of 2019, he had a feeling something special could happen.

“The weather was perfect. It was hot, and it was kind of windy. I said ‘This is a good day to break the record,’” Brooks said.

After that school record breaking throw the colleges started calling. Brooks’ first love, football, was what he was hoping to get the call for but it was his track and field ability that landed him the big offers.

The top three schools that Brooks had call were VMI, East Carolina University (ECU) and Norfolk State University. ECU could not give Brooks a scholarship the first year so he had to pass on that opportunity because he needed financial stability.

He chose VMI over Norfolk State because of the long-term benefits a degree from VMI brings.

“The alumni association (at VMI) is way better. I looked in the long run and VMI is the better choice because after I graduate I have a pretty much guaranteed good job,” Brooks said.

As he enters his second year at VMI, the psychology major with a minor in Arabic is already looking forward to life after track and field and college.

Brooks plans to enlist in the United States Army after graduation as a second lieutenant and hopes to go into military intelligence. After his time with the Army is over, he wants to go into some sort of federal law enforcement such as the CIA, FBI or DEA.

The youngest of four children, Brooks said his mother and father went a little easier on him because he was the baby in the family, but there were still expectations. “They always made me work for what I had, they never gave me anything,” Brooks said.

His father always stressed the importance of going to school and getting an education as well as being respectable and polite as a person.

His freshman year as a member of the VMI track and field team was a learning experience as well as a chance to prove to himself and others that he was up for the task. In the final event of the season Brooks competed in the Southern Conference Indoor Track and Field Championships. Brooks finished twelfth in the weight throw and was named to the men’s all freshman team on the second day of the championships.

Brooks remembers looking around at the talented athletes that surrounded him growing up, but through his hard work and determination it was himself that he could be proud of.

“There was always people better than me athletically growing up, guys that were always faster than me and stronger than me, but I always had that heart to keep on going and the determination to get better and that drove me to be the best I can be.”