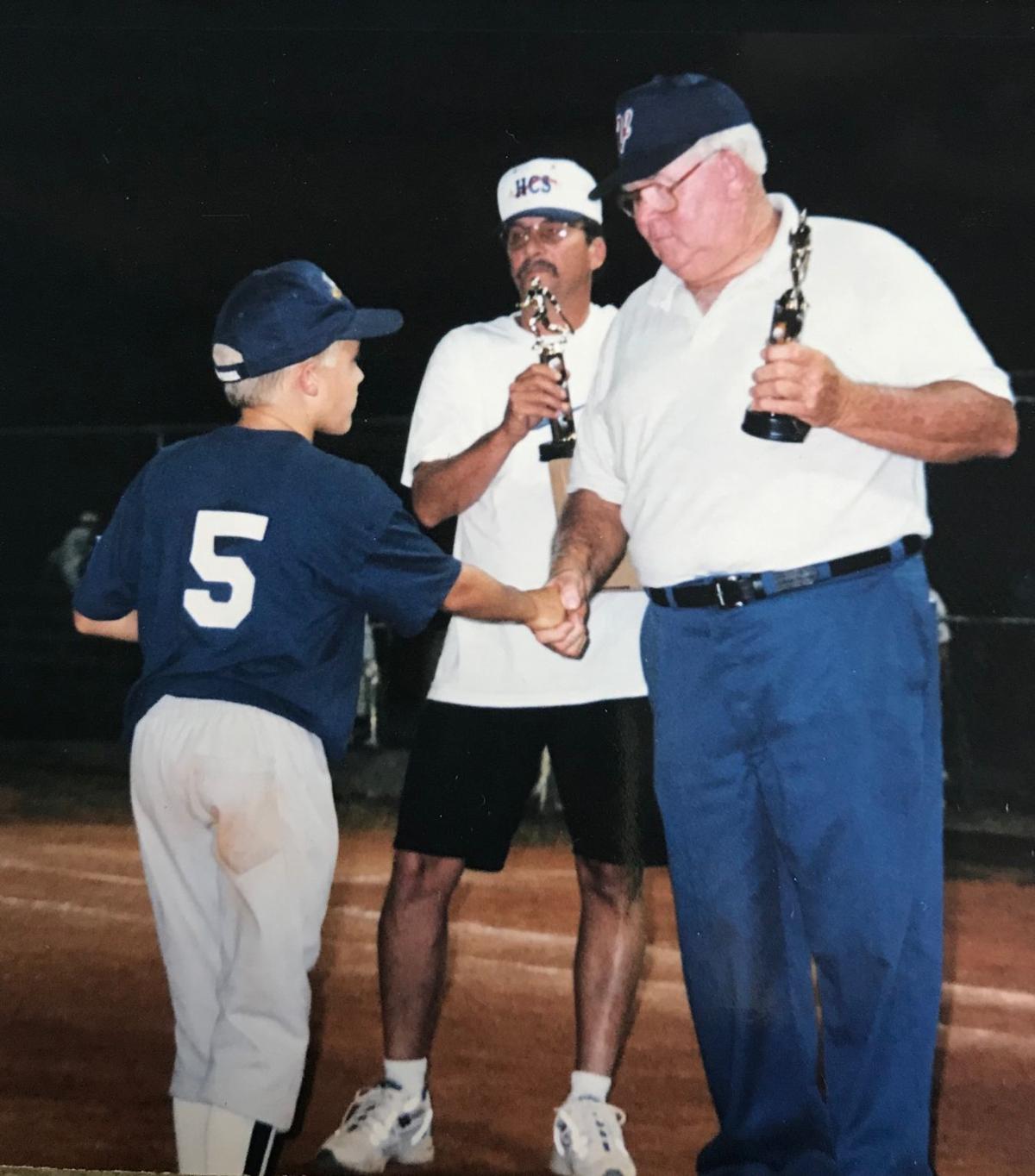 Harrison Conner presents Michael Ferrell an award at the end of one of the baseball seasons at Conner Fields in the early 2000s. 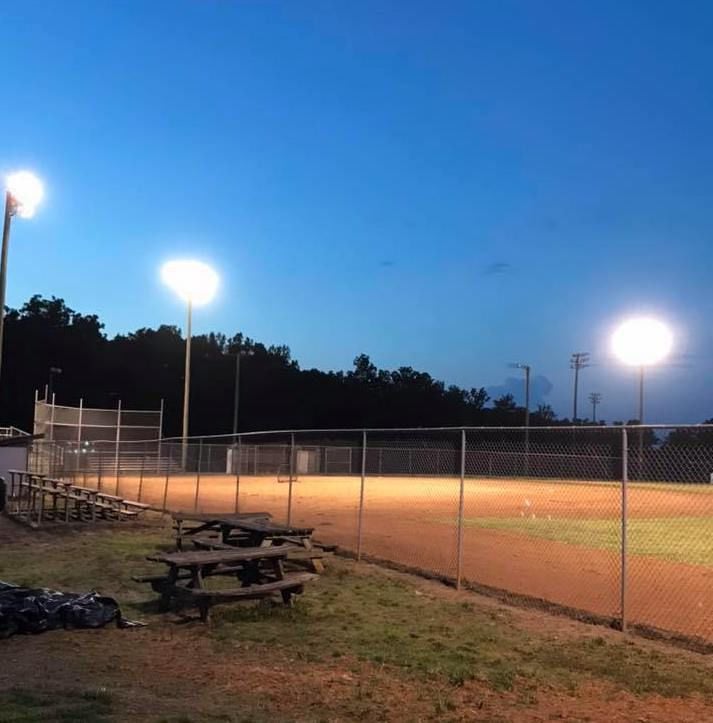 Harrison Conner presents Michael Ferrell an award at the end of one of the baseball seasons at Conner Fields in the early 2000s.

Halifax County lost a titan in the youth sports community recently, but Harrison Conner’s legacy and what he did for the Cluster Springs community will never be forgotten.

Conner was the key piece who brought youth baseball to Cluster Springs close to 20 years ago, using his own land to build three ballfields in addition to the one already there behind Cluster Springs Elementary School.

He brought together a community and gave them memories that will last a lifetime.

Conner died on March 23 at the age of 83 and his family — as well as the community — wanted to share his passion for youth sports. Conner’s obituary told about his devotion for his community and his dedication for the ballfields at Cluster Springs.

In fact the fields at Cluster Springs were known as Conner Fields, named obviously for his contributions to the facility. Two former players in the Cluster Springs league, Justin Bagbey and Michael Ferrell, shared their memories of growing up around Conner and being a part of the building of the facilities there.

“When I first started out there all we had was the one baseball field at Cluster Springs Elementary School that we all played on, and through all the years that I played there he grew the place into another Dixie Youth field, a T-ball field and a Babe Ruth field,” Bagbey said. “He grew that place immensely throughout the years,” Bagbey added.

Conner was a well-known contractor, and he used those skills to turn one field at the elementary schools into four fields, as well as other facilities to create a complex for kids of all ages to enjoy. During its peak, there were 21 teams competing on the four fields throughout the summer. There were six T-ball, teams, six minor league teams, six major league teams and four Babe Ruth teams.

“He invested not only his own time, but his own money into that facility as well,” Ferrell said.

Conner used his own land to help build the facilities and also dedicated a lot of time to maintaining the upkeep of the fields. He could be found at the fields before, during and after games making sure that each field was looking the best that it could. Conner was also the league president.

Former Gazette-Virginia sports editor Joe Chandler remembers the fields and the immaculate shape that Conner kept them in.

“Those fields were as pristine as any fields that you would find anywhere in this community,” Chandler said. “They were well manicured and well taken care of.”

Conner didn’t necessarily want the limelight for what he did, but he did want those around him to be recognized. Ferrell said Conner made sure that people who were instrumental in giving their time to the fields and facilities were given recognition. Ferrell said Conner would give out plaques to those volunteers for their service to the community.

“He was just the kind of person that people naturally wanted to help. If he needed help, he didn’t even have to ask because people were just so willing to help, because everybody knew and everybody understood what he was trying to do. Everyone wanted a piece of it and helped out, whether it was at the concession stands or anything else,” Ferrell said.

The Cluster Springs community and Halifax County as a whole knew that what Conner was building was special. The fields always had games going, the parking lot was always full, and the smell of hot dogs on the grill was always permeating from behind the concession stand. What was once one quiet field had turned into one of the busiest facilities in the county. This was because of one man’s vision and the help of the community that helped turn that vision into a reality.

Chandler echoed those words by Bagbey, saying all of Conner’s work and time were for no other reason than to provide kids a place to play and learn the game of baseball.

There was one word that kept coming up when those who knew Conner best kept saying: selfless. That word alone seems to describe Conner the best. Ferrell described Conner by saying that he was one of the few that did for everyone else. Ferrell said that Conner got his enjoyment from helping and working for everyone else, and to see them enjoy those things that he worked so tirelessly over.

Bagbey talked about how Conner’s dedication to the kids that played in the league went far beyond their youth. Bagbey played college baseball, and in the summers between college ball, he played baseball in the Valley League. Bagbey said that Conner would come watch him play both college baseball and in the summer leagues. He kept up with his players and followed them throughout their careers.

Bagbey went on to talk about how Conner never stopped making sure that kids he coached when they were younger were doing OK.

“I would go visit him, and he would ask me how I was doing in life, and when you meet someone who keeps up with you your whole life it is very special, and you do not see a whole lot of that nowadays and that is what he meant to the entire community because he would keep up with everybody,” Bagbey said.

It also wasn’t Conner by himself who made things go at the ballpark. His wife, Geraldine, was at the facilities every night there were games as well. Geraldine could be found all over the park, in the concession stand or making sure that everything ran smooth throughout the evening. Conner’s children also helped coach in the league, making it a true family affair.

It is easy to see the impact that Conner had on the kids that he mentored, the families of those children and the community as a whole. A selfless man who built youth baseball in Cluster Springs, maintained the facilities, ran the league and had an impact on everyone he came into contact with.

“That man honestly touched a lot of lives,” Bagbey said. Ferrell added that Conner was just a natural leader.

“He was really instrumental in youth sports here in Halifax County,” Chandler said when summing up Conner’s impact in the community.