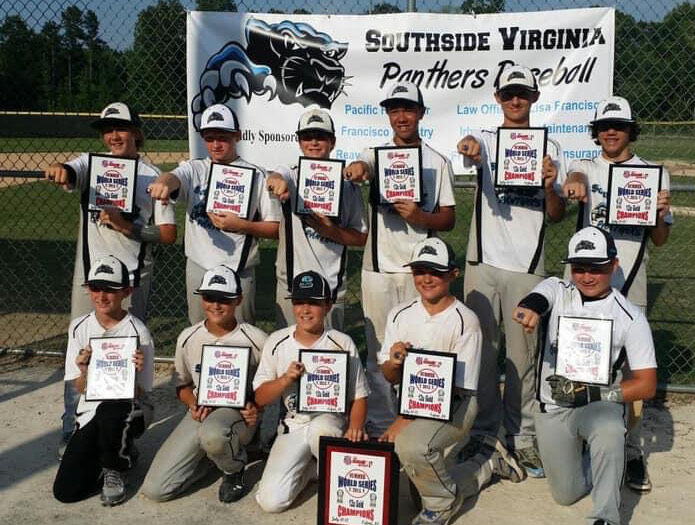 The Southside Panthers, based in Halifax County, won the 2015 AAU Summer World Series in Oxford, North Carolina. Eight players off of this team have or will go on to play college baseball. 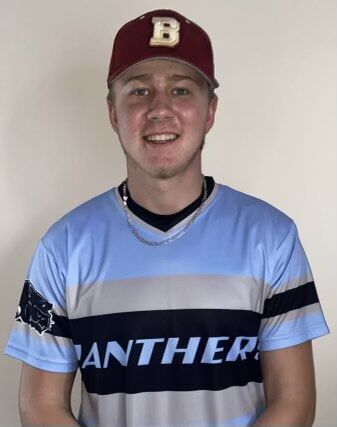 Randy Crabtree is a senior at William Campbell High School and will play college baseball at Bridgewater College. 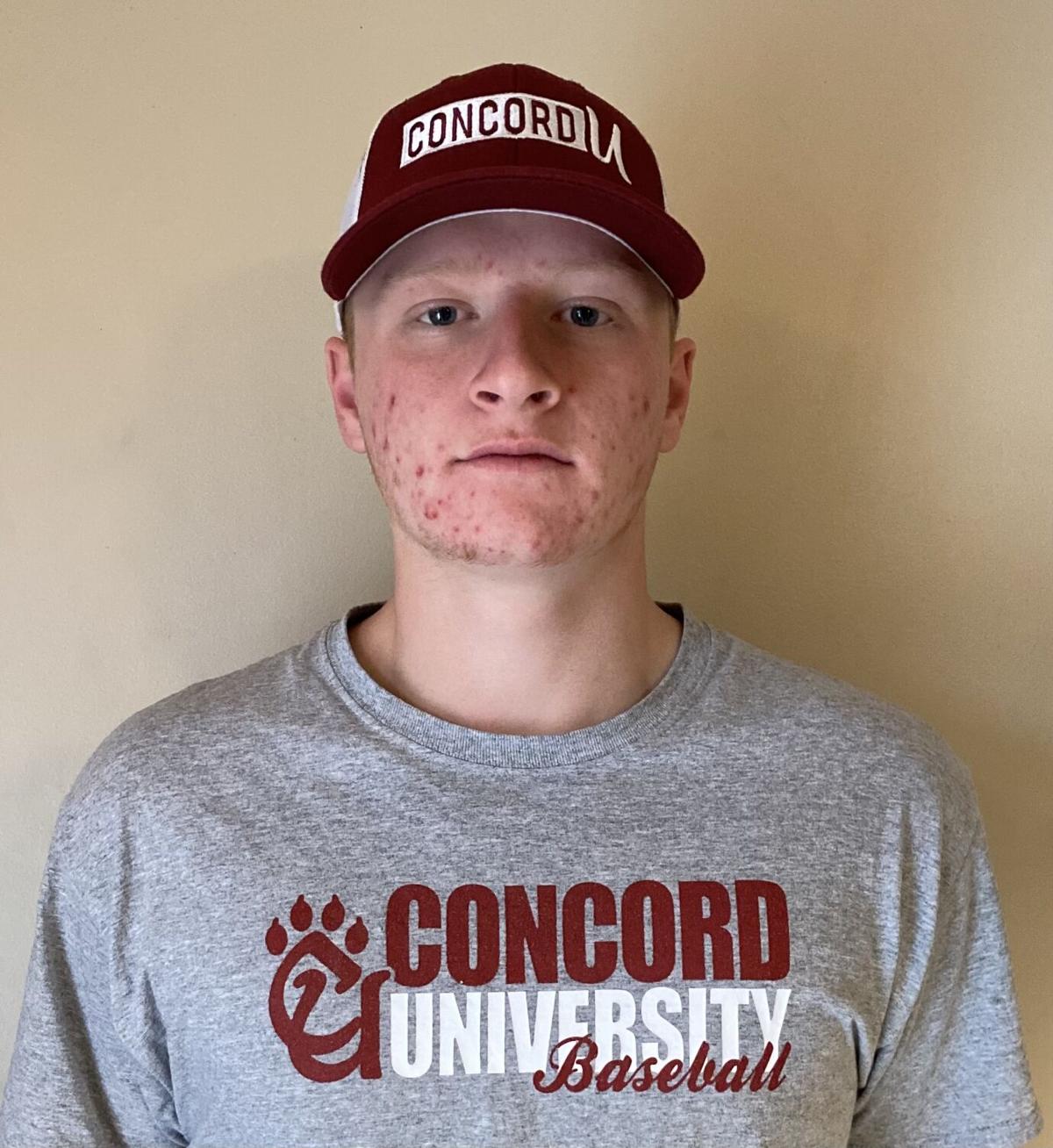 Joey Duffer committed to play college baseball at Concord University. He is a senior at Halifax County High School. 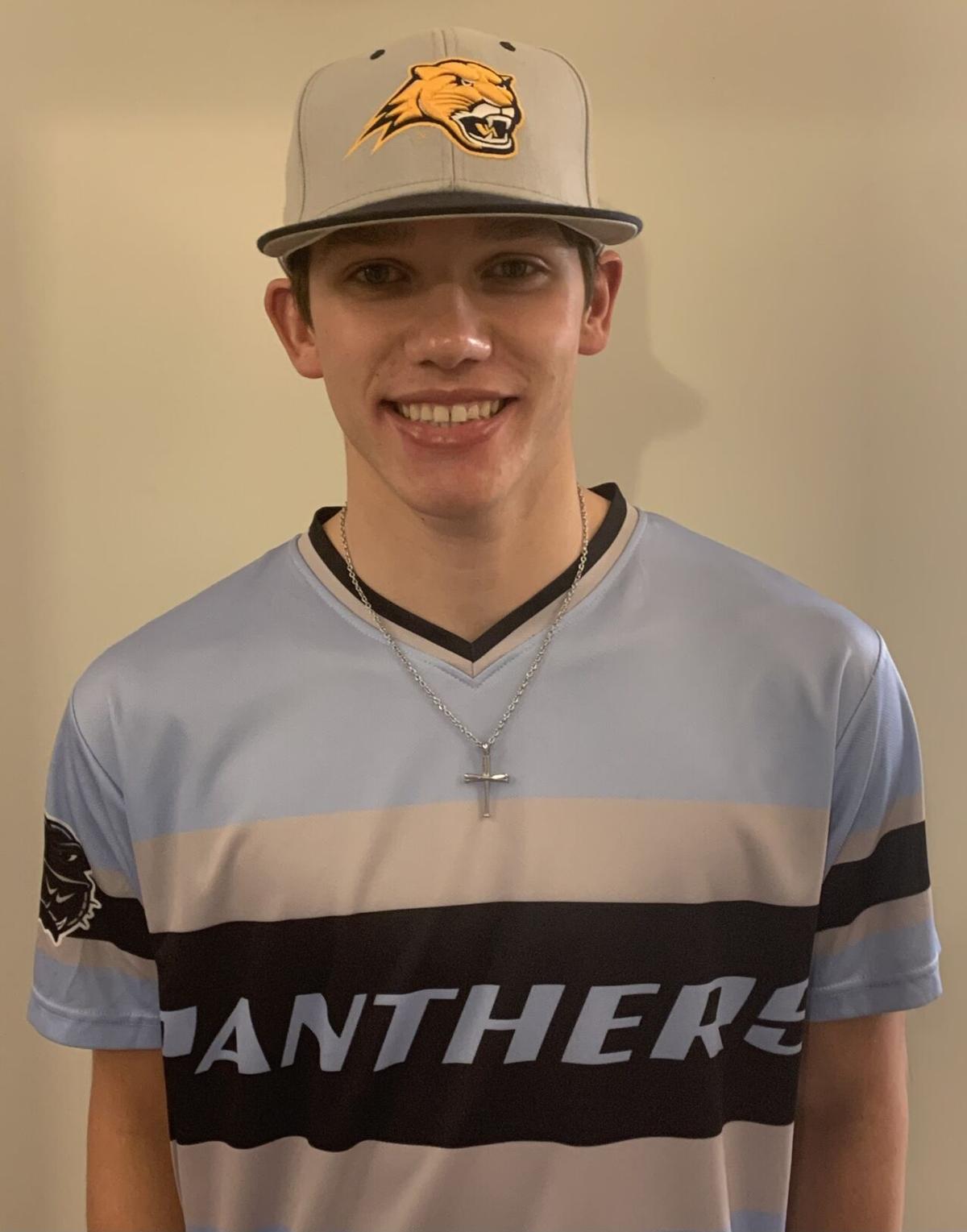 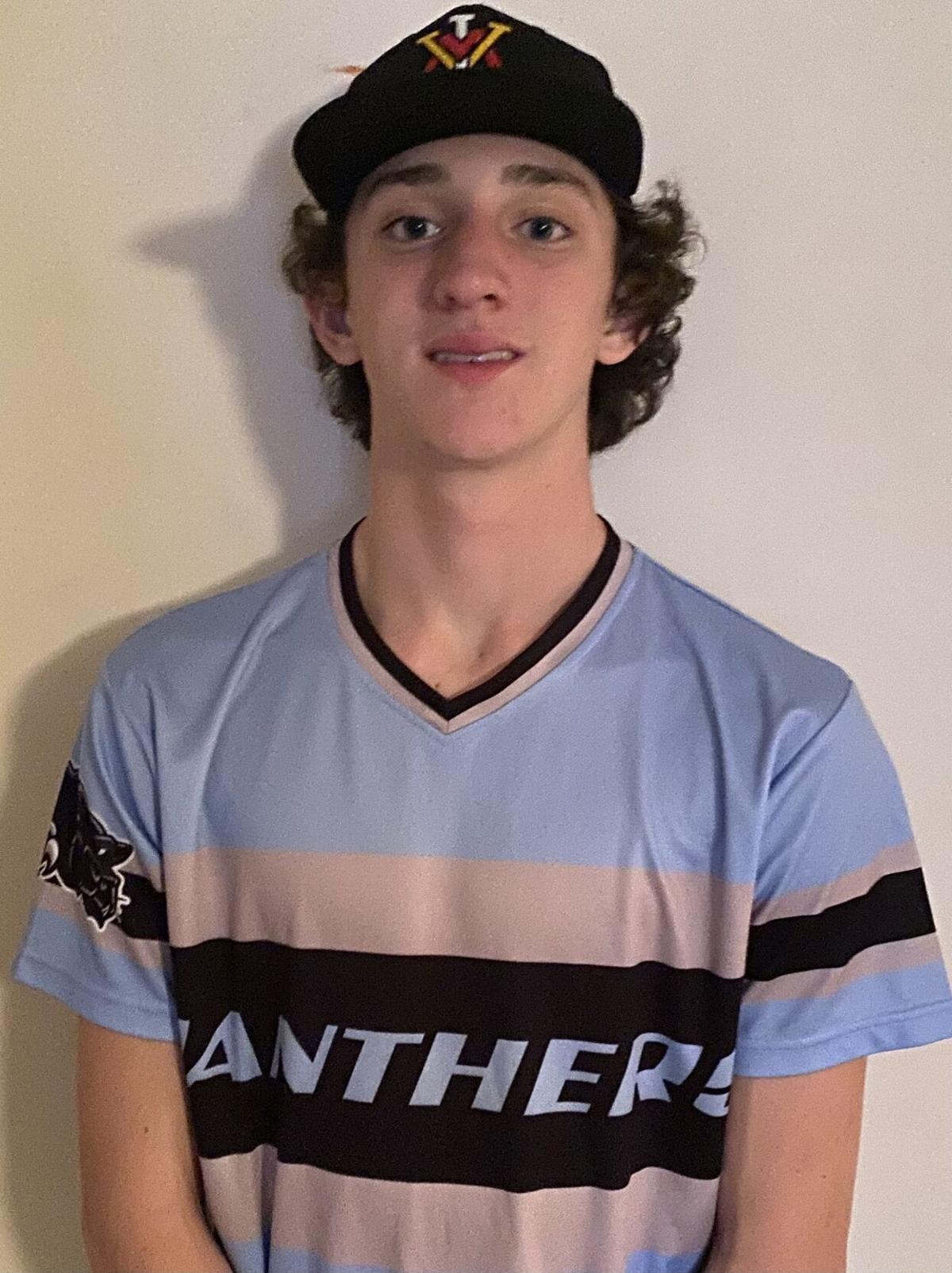 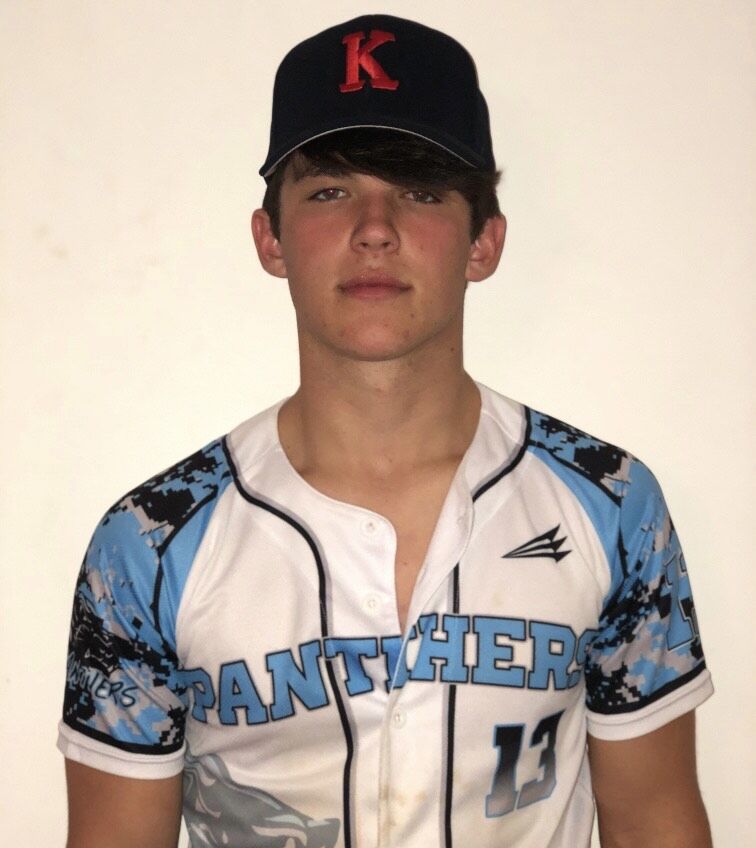 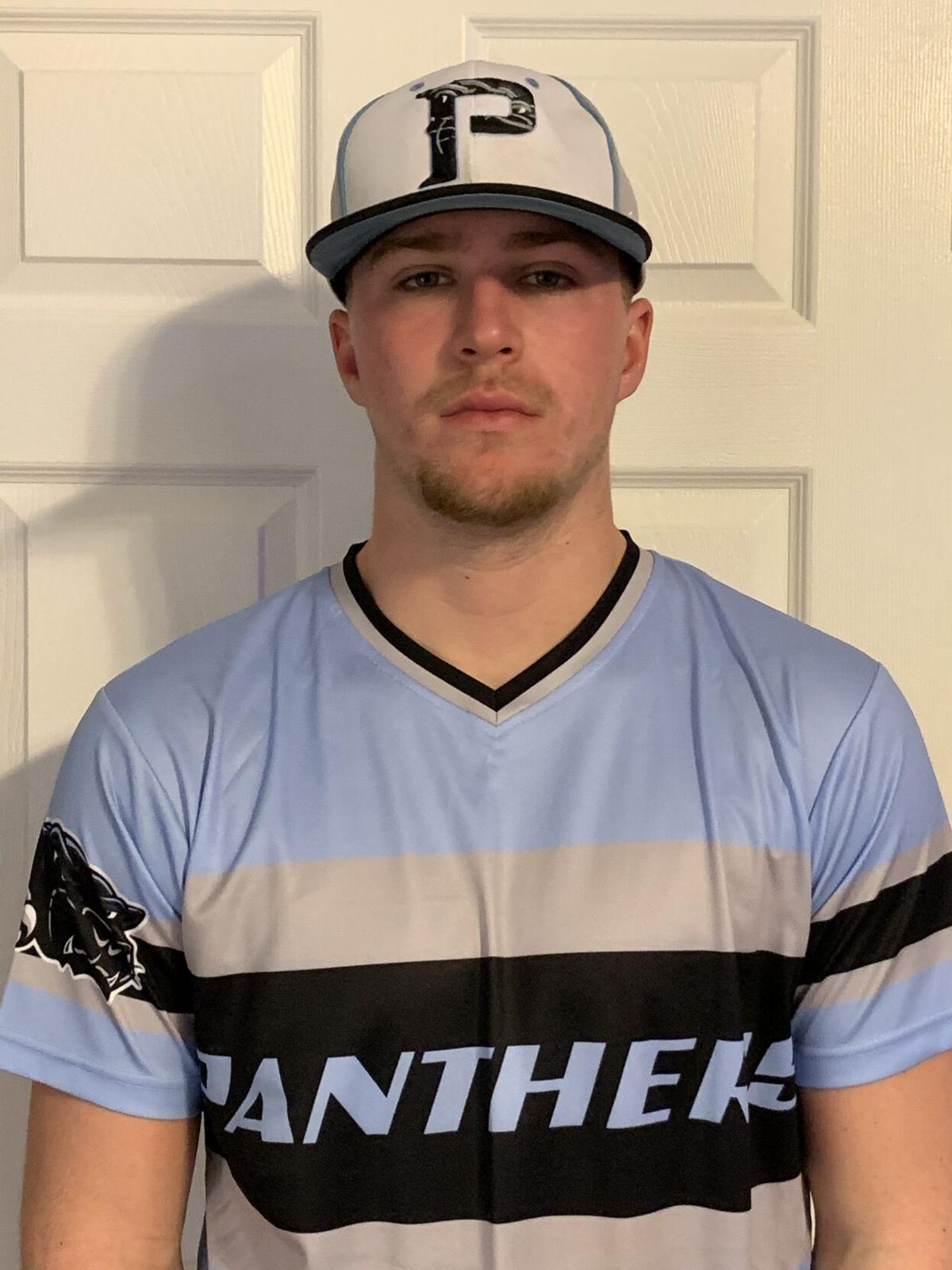 Sloan Seals is continuing his baseball career at Ferrum College. Seals is a senior at William Campbell High School.

Only 7.3% of over 480,000 high school baseball players went on to play college baseball based on a 2018-2019 study by the National Federation of State High School Associations.

But for one Halifax County-based travel baseball team, there are six players in the class of 2021 that are headed to play college baseball.

“My response was that I don’t care what the name is; I just want to coach a baseball team,” Lloyd said.

A lot of the kids that would make up the Panthers roster were playing with a team out of Cluster Springs, South Squad, but when that team folded, a lot of those players came over to the Panthers.

The team became what is known in the travel baseball world as a blended team. A blended team has players from multiple age groups. The majority of the players on the team started when they were ten years old. Some were a year older or a year younger, but most were in the ten-year-old range when things began for the Panthers.

Along with Lloyd and Seals, Lee Barker and Randy Irby joined on to form the coaching staff. “He (Irby) was listed as a coach, but he always kept us organized with all of the paperwork, rosters and money. The business side of it. For us, he was a big part of everything because he freed us up to do baseball,” Lloyd said.

From the beginning, Lloyd said the goal was to make sure that he and the other coaches prepared the boys for college baseball. “To make sure they had the fundamentals and that we gave them every opportunity to play college baseball, so we explored every avenue, whether it be camps or bring in people to do scout days early on,” Lloyd said.

Those scout days and evaluations gave the players a true, independent evaluation so that each player knew where they were skill-wise and where they needed to go. Those evaluations from people such as Greg Conner with EvoShield Canes baseball, and Greg and Jeff Stephens also helped the coaches structure their practices.

“We always used that to adjust what we did at practices, focusing on skill sets that they needed to work on,” Lloyd explained.

Greg and Jeff Stephens played a big part in the Panther’s player’s lives, working and doing evaluations. Still, Lloyd and the other coaches brought them in to do a winter clinic yearly, and through those clinics, a lot of connections were made that would benefit the players in the future.

Lloyd and Seals also had local players come to their practices, mentor them and help them out in certain areas. Players like Andrew Abbott, Ethan Woltz and Clay Lloyd would come by practice every once in a while when they were home from college and help with teamwork.

“They were always having a new guy come in and help us; they always tried to give us the best coaching we could get and the best eyes on us while we were playing,” Crabtree said.

Lloyd and Seals mentioned that one of the best things about the team was their mentality to put in the work every day to make themselves and the team better.

“These kids are hard-working kids. They did everything we asked of them,” Lloyd said. “We may have set up the practices and been there to facilitate them, but the boys did the work,” he added.

Lloyd said that they typically took a small break in December, but other than that, the boys worked at it throughout the year. “The boys had fun together. We didn’t have any real issues. They always enjoyed being around each other, and they were kind of like brothers,” Seals said.

All of the players knew their roles on the team, and they never tried to outdo the other or be a superstar on the team. They supported each other, and they all wanted to get better collectively.

Crabtree echoed the brotherhood feeling that came with playing with the Panthers growing up. “We started at 10 years old and played together through the years; we practiced together every Sunday, and it was more of a brotherhood than a team, honestly,” he said. “We would all hang out together and were good friends outside of the team, and Roy (Lloyd) thinks of us as his kids, and so does Chad (Seals), and I know they will always be supportive of me even at the next level,” Crabtree added.

In reflecting on the first time Lloyd realized that the team’s talent was special, he went back to Richmond’s showcase tournament in November 2018.

“The entire nucleus went down there with close to 250 kids there. I watched them the majority of the weekend, and we were right there (talent-wise) with everyone else,” Lloyd said. “We might have been a small team, but we were right there everyone else, and I guess that was the light bulb moment when I realized these boys could compete with those other organizations,” he added.

The World Series win capped off a spring season where the Panthers finished with a 20-5 record.

But baseball wasn’t everything for Lloyd, his staff and the players in the Panthers organization. Teaching the boys about life and having fun together also was a major talking point.

“I feel good about where the kids are, not just school-wise, but as young men, because we focused on that. The majority of our talks were probably on character more so than athletics,” Lloyd said.

“Character, hard work and determination.” Seals added. “If you ask any of those kids, they will get a good chuckle about the speeches that we gave before and after that games, and they could probably recite most of the things in their sleep now,” he went on to say.

Seals and Lloyd both agreed that building character and grooming the boys to be something past the game of baseball was one of the primary goals they had.

Fun also was something that Lloyd, Seals and the other coaches wanted to show the team. As hard as they worked, the team was always rewarded with opportunities to have fun and build on that brotherhood bond they were forming.

“Every summer, we did a Panthers only campout where we literally camped out on the baseball field and cooked s’mores right there on the baseline and played games together all night,” Lloyd said.

There also were team trips to Kings Dominion and other things like cookouts to help build the bond. “Sure, baseball was a part of it, but they didn’t mind the work because they had all of the other experiences to go with it,” Lloyd said. “I hope when they get our age, they look back and think about the campouts and just think about all of the experiences,” he added.

Even as recently as a month ago, many of the players and coaches of the old Panthers squad got together and had dinner, showing how close they remain today.

Crabtree, heading to Bridgewater College, credits Lloyd and the coaching staff for helping him get to the college level. “They really first established the work ethic in me as an athlete when we were only 10 years old. Every Sunday for three or four hours after church. They made me feel like I had the talent to make it to the next level and showed me I did,” he said.

Around the fall of 2018, Lloyd and Seals started talking about folding the organization if they could find a bigger team to take on the majority of the players to have a better chance at getting looks by colleges.

The decision to fold and move the boys to a bigger organization started when they had a large group of seniors aging out, and with the numbers getting smaller, they made the tough decision.

They also knew that they didn’t have the connections that they needed. “Chad and I talked about that for a few years before making the switch. The goal was to make sure the boys were promoted and had the exposure they needed to get to the college level,” Lloyd said.

“We had actually hired two different people to do that for us during the last year before we moved to the Breeze organization as a whole,” Lloyd added.

Seals also knew that they didn’t necessarily have the connections and could take the team to any showcase tournament that they wanted to, but if their name weren’t out there, they wouldn’t get a lot of the coach’s attention.

“Dustin Harris was primarily the reason we moved to the Breeze,” Lloyd said. “In my opinion, Dustin Harris is the hardest working man out there for these boys. He does it for the right reasons, and he is a great guy,” Lloyd said. “It was probably the best move that I ever made for any of these boys was the connection we established with Dustin,” he added.

The Breeze wasn’t the only team that inquired about absorbing the Panthers team, but Harris sealed the deal to move to the Breeze.

Seals believe that the teams’ hard work and talent got the team many offers when they began talking about disbanding. “Our boys worked on it from age ten up, and they all have excellent skillsets that other organizations could see that they had, as well as fundamentals, and they were very good at it,” Seals said.

“We were very blessed that we had the right mixture of kids who wanted to learn and who had athletic ability,” Lloyd added.

Most of the team has been together for seven or eight years, and now that they are heading off to college soon, they have formed bonds that will last a lifetime.

Crabtree sums up the mindset that each one of the Panther’s players had as they embarked on their journey those years ago.

“When you have that brotherhood, everyone wants to be successful; it is not just the I’s; it’s that we are all on this team together, and we all want to make it to the next level,” he said.

“We all pushed each other to make each other better to play at the next level. We wanted the best for each other, and we all wanted to play college baseball and make it out of Halifax, Brookneal or wherever we were from.”

Hanson, who is attending Averett University, spoke about what the team meant to him and the coaches. “Playing for the Panthers taught me a lot, not just for baseball, but as a person. I would never be in the position I am now if it wasn’t for Roy Keith (Lloyd) and that team,” Hanson said.

“Playing for the Panthers made me fall in love with baseball, and it is also where I met some of my greatest friends. Playing with that team was one of the greatest experiences of my life, and I wouldn’t have traded it for anything in the world.”