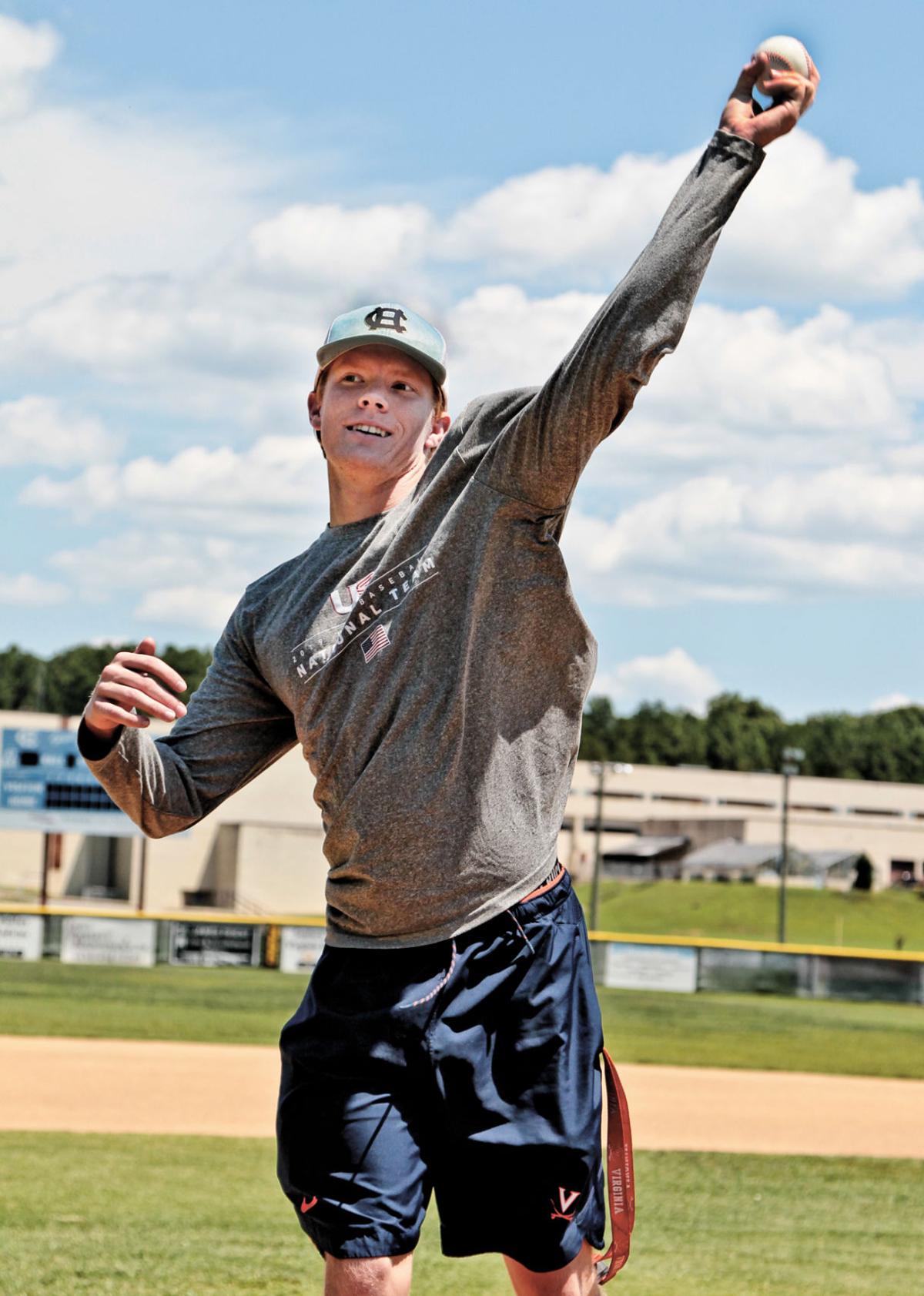 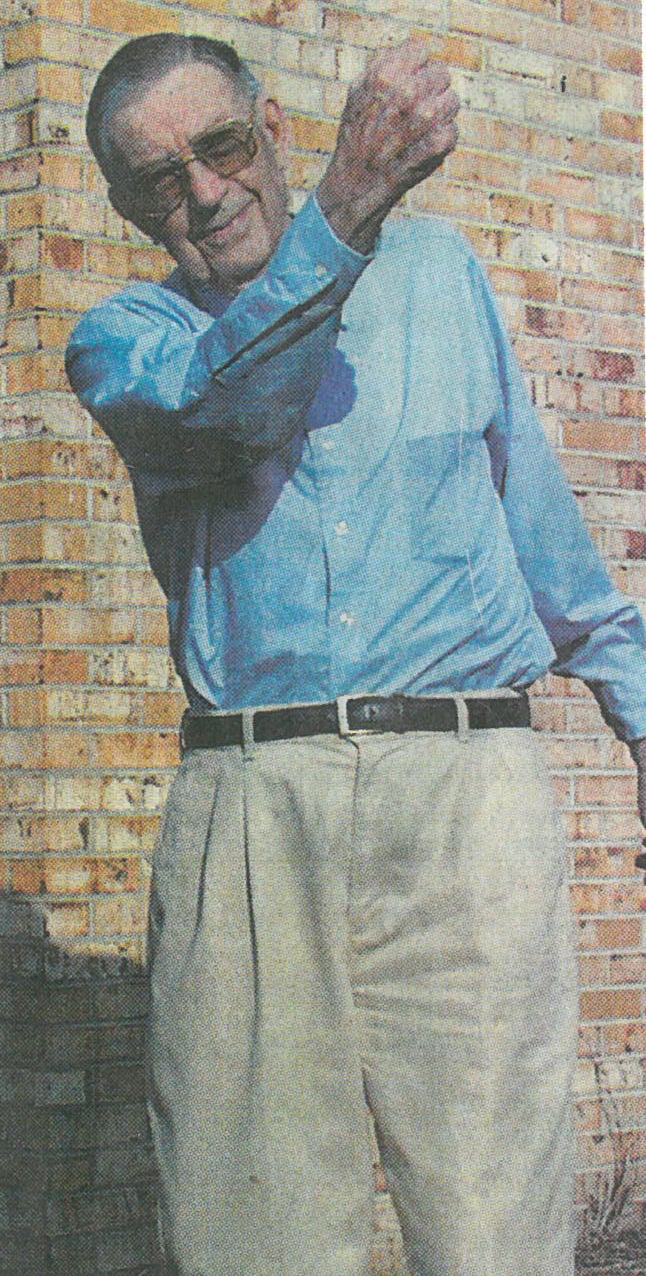 Scottsburg native Edward Ligon demonstrates — in a 2001 file photo — the “underhand curve” that struck out 21 Stuart’s Draft High School batters in a 1932 baseball game in Scottsburg.

Scottsburg native Edward Ligon demonstrates — in a 2001 file photo — the “underhand curve” that struck out 21 Stuart’s Draft High School batters in a 1932 baseball game in Scottsburg.

When it comes to records for baseball in Virginia High School League history, Andrew Abbott’s high school career and 2017 senior season comes to mind for most, but in addition to his accolades is a lesser known achievement: Edward Ligon’s 21-strikeout game on the mound against Stuart’s Draft as a member of the Scottsburg Agricultural High School team in 1932.

Ligon was born in 1914 and was one of 10 children who grew up either on the farm or playing baseball and basketball. Ligon died in 2004 but the memory of that early spring day in 1932 still remains.

Edward Ligon’s younger brother, Billy, recalls their childhood growing up in Scottsburg. Billy Ligon said that it wasn’t easy growing up in those days.

“Nobody had any money, we lived off of what we got out of the ground,” he said.

Edward Ligon, along with most of his other brothers, grew up playing sports — mainly baseball and basketball.

When they weren’t helping on the farm, they were playing sports.

Billy Ligon also played sports during his time at Spartanburg Methodist College, and participated in alumni games at the school in Scottsburg where they were able to play against their parents and older siblings including Edward Ligon.

Edward Ligon’s 21-strikeout game in 1932 is not in the official VHSL record books, but the feat would be tied for first place all time in a seven inning game. There are 21 batters in a seven inning game so that meant Edward Ligon struck out everyone he faced. In an article from The Gazette-Virginian in October of 2001, Edward Ligon said that he used a knuckleball and underhand curveball to stymie the Stuart’s Draft players. Edward Ligon also said that the opposing team had mostly right handed batters and the curveball broke away from them, catching the batters off guard most of the day.

After high school Edward Ligon moved to Baltimore, Maryland where he began working with the Ohio Puritan Gas Company. He moved from Baltimore to Charlotte, North Carolina, then to Wisconsin and finally to Atlanta, Georgia where he worked until he retired from the gas company. Edward Ligon remained in Atlanta until his death in 2004.

Halifax County High School alum, and current University of Virginia pitcher Andrew Abbott’s career was one that is going to be hard to top anytime soon. Abbott, who is ranked in the top 100 draft picks for the upcoming Major League Baseball Draft according to mlb.com, compiled several records in his high school career from 2014-2017.

Abbott is ranked in the top six in the VHSL record books in several categories. Abbott is sixth in career earned run average with a 0.69 era in his four years. He also is ranked fourth in single season era with a 0.29 mark set in 2017. Abbott also is ranked fourth in career strikeouts with 383 punch-outs in his career. Abbott is ranked second in strikeouts in a single season with 158, and strikeouts in a seven inning game with 20, both of those records coming in his senior season in 2017.

Abbott looked back on his career and his 2017 senior season when he had the 20 strikeout game. It was the next to last game of the season and Abbott and his teammates were having a great season. They were 15-2 at the time, and would go on to finish as the state runner up, losing an extra inning heartbreaker in the state championship game.

“I honestly couldn’t keep count,” Abbott said about the amount of strikeouts he had in the game against Magna Vista. “I just knew I was getting a lot of them out that way. In the game I wasn’t really worried about that because they were in our district so obviously it was a big game to win because we wanted to win the district title outright,” he added.

Abbott gave up four hits in the game and the Comets won 8-1. The one run was scored on an error. “I don’t consider that to be the best game I ever had, there were games where there were less strikeouts and more ‘I am in control of everything going on’” Abbott said. “There are certain games like pitching against really good teams where our team shut them down completely, and those games felt better than others against teams of lesser talent,” he added.

“That last season I was honestly just trying to get better at what I was bad at, I didn’t like walking people so the big thing was just trying to throw strikes, and throw a lot of them,” Abbott said. “I knew I had good stuff. I knew I could overpower people so I knew I just had to get ahead of them. I didn’t want to lose a game by walking people. I would rather lose by them getting a hit off of me,” he added.

Abbott knew that the 2017 Halifax baseball team was going to be special. Him and his teammates had been playing together since they were very young and the chemistry between them made for a season to remember. Abbott said that the 2017 team expected to have a good season, mainly because of their chemistry and how many of them began playing together at an early age. Abbott used that season to work on his pitching for college and at the same time helped his team to a state runner up finish.

There’s no doubt that Abbott’s 2017 season and entire career as a member of the Halifax County High School was one to remember, and also one that will go down as one of the best in not only Halifax history, but in the commonwealth of Virginia as well.