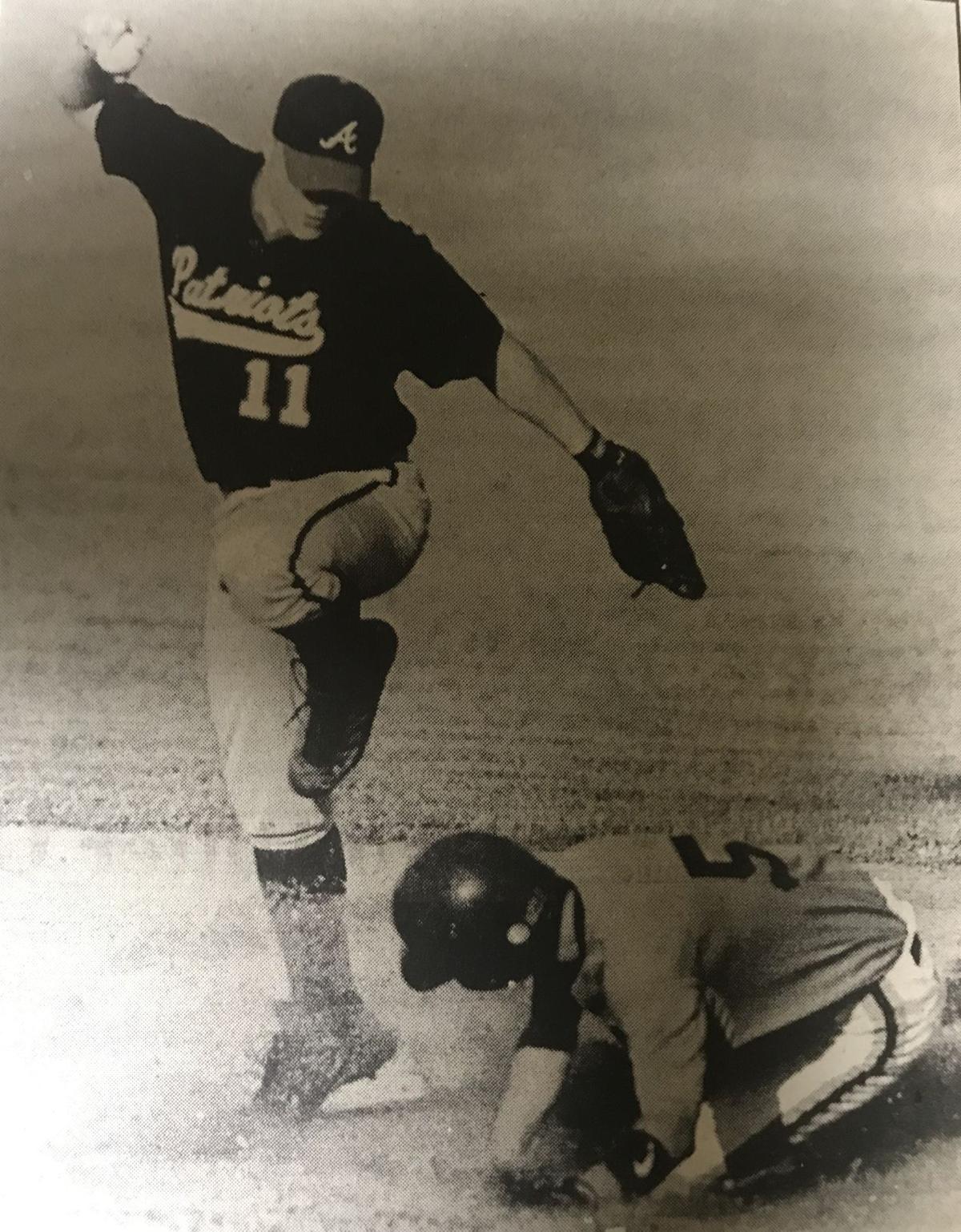 Christopher Parker attempts to break up a double play by sliding into second base when he was on the Comets baseball team. 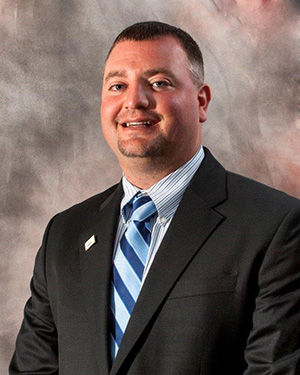 Christopher Parker, a 2000 graduate of Halifax County High School who grew up on a tobacco farm in Nathalie, was a four-sport athlete who gravitated to the game of baseball.

It was his love for sports that led him into his role as the head of the second largest athletic association in the United States. Parker is the president and CEO of the National Junior College Athletic Association. He’s responsible for the oversight of the association and leading the 512 member colleges of the group.

While attending Halifax County High School, Parker obtained an associate’s degree from Southside Virginia Community College while attending governor’s school. After high school Parker attended Hampden Sydney and finished his undergraduate degree with a bachelor’s in science and human nutrition food and exercise with minors in biology and Spanish from Virginia Tech.

While attending VCU for his master’s degree Parker was a graduate assistant baseball coach. When he was at VCU, Patrick Henry Community College reached out to him about being a part of their attempt to become the first community college in Virginia to join the NJCAA. Parker was hired by PHCC as athletic director as well as baseball coach and was tasked to help the school become a member of the NJCAA.

Parker also served as the dean of academics, vice president and executive director while at PHCC. He helped the Martinsville community college become a member of the NJCAA, which entails establishing the parameters of the membership, the sports the school wants to participate in, who the athletic director will be and the facilities at the school.

Parker then left PHCC to become the vice president at Pfeiffer University. It was there that Parker learned that the president and CEO at the NJCAA was retiring. Parker applied for the position, and after a long and tedious process, was offered the job.

That was nearly three years ago.

Since then Parker has made many strides to help grow the NJCAA as well as help educate people about what they have to offer.

Many people around the country do not know the opportunities that a junior college presents to student athletes. The NJCAA has long provided student athletes a place to play the sports they love for a variety of reasons.

“Our motto at the NJCAA is ‘Opportunities start here,’ it doesn’t matter why you attend a two-year college. It may be you want to stay at home and save money, it may be you need to get bigger, faster, stronger. It may be you need some academic support, but junior college sports are pretty phenomenal when you look at it,” Parker said.

Parker explains that per capita, there are more Major League Baseball draft picks that come from junior colleges than there are from high schools and four-year colleges.

Big names such as Roger Clemens, Albert Pujols, Bryce Harper, Bubba Watson, Cheryl Swoopes and Tyreek Hill all got their starts at the two-year level for some reason or another.

Another statistic Parker gives is that 80% of the number three, four and five batters in the Atlantic Coast Conference (ACC), Southeastern Conference (SEC) and the Big 12 all started in the NJCAA.

“You look at the opportunities to play Division 1 baseball, there are only so many scholarships and if you go NJCAA you may have a full ride out of pocket zero dollars and you are getting drafted or getting to sign a D1 offer and end up saving a lot of money,” Parker said.

Many college coaches today are recruiting heavily at the junior college level and particularly from the NJCAA. Parker says that these coaches are recruiting so heavily into the NJCAA because they are trying to get the mentality and experience level higher on their teams. If someone brings in an established NJCAA student athlete that has two years of eligibility left they bring an instant spark to the team.

The perfect case for this in Virginia would be Bryce Perkins who recently graduated from the University of Virginia. Perkins began his college career at the Division 1 level at Arizona State University, but a neck injury derailed his future. Perkins recovered from the injury and ended up playing at Arizona Western, a NJCAA school. Perkins excelled, leading his team to the national championship game before losing a close battle. Perkins transferred to UVA and led the Cavaliers to their best two seasons in over a decade, culminating in a win over Virginia Tech and a trip to the Orange Bowl in his senior season.

“It’s all about finding the niche or the fit and that is what the NJCAA does. They let people grow into who they are, who they want to become and who they are destined to be,” Parker said. “The key word is growth, whether that growth is academic, athletic, financial or whatever it may be, the growth is the key and it is a self evaluation,” he added.

Perkins used the NJCAA to gain recognition after a gruesome injury, but there are plenty of other reasons that student athletes use the NJCAA across the country. The hit Netflix show “Last Chance U” has brought those reasons to the forefront. “Last Chance U” is the story of football players who were highly sought after recruits coming out of high school, but for various reasons had to take the junior college route. Some of the players started playing at Division 1 schools and grades or behavior ended up getting them kicked off of those teams. They used the NJCAA as a place to start over and prove that their mistakes were not who they were.

The first two seasons of the show showcased East Mississippi Community College and the next two seasons featured Independence Community College in Kansas. The show became an instant hit, mainly because the coaches at the two schools were very animated and made for great television, but there were several memorable players who were highlighted that rebranded themselves and used the NJCAA to get a fresh start. There were several players who successfully used the NJCAA to transfer to Division 1 schools and a couple has had opportunities to play for NFL teams.

“If you go to Texas, a lot of kids are going to pick that two-year school over a four-year school, there are MLB players coaching them and there are people who are looking after them from top to bottom to make sure they are successful,” Parker said.

In the three short years that Parker took over as president and CEO at the NJCAA he has made several changes that have helped improve its presence in the country. The last two years the NJCAA football and men’s and women’s national championship games have been broadcast live on national television by CBS Sports Network. The NJCAA Foundation was created, which is a separate 501 C3 organization that is there to help student athletes.

Parker has grown the staff from nine to 21 full time employees along with 96 directors around the country. They have increased their revenues and awareness and continued to build off of that so that high school students know that the NJCAA is not a last resort, it can be their first choice.

The NJCAA also is getting ready to launch the NJCAA Digital Network, which Parker says will be more opportunities to get exposure for the association. The digital network will have live and archived games from the different sports, as well as features on the colleges and their student athletes.

Though Parker is leading the second largest athletic association in the country, he doesn’t forget his humble beginnings in Halifax County.

“I owe a lot of gratitude to my parents for instilling the work ethic and determination to be successful and always finish what you started,” Parker added.

There also were several coaches and mentors that Parker thanked for their part in the success that he have had. Coaches Barry Powell, Kenneth Day, Allen Lawter, Freddy Palmore and Todd Trickey were just a few that he named. “There are so many good people at home that played a part in the success in my career both on and off the field. I thank them from the bottom of my heart for everything they did for me.”