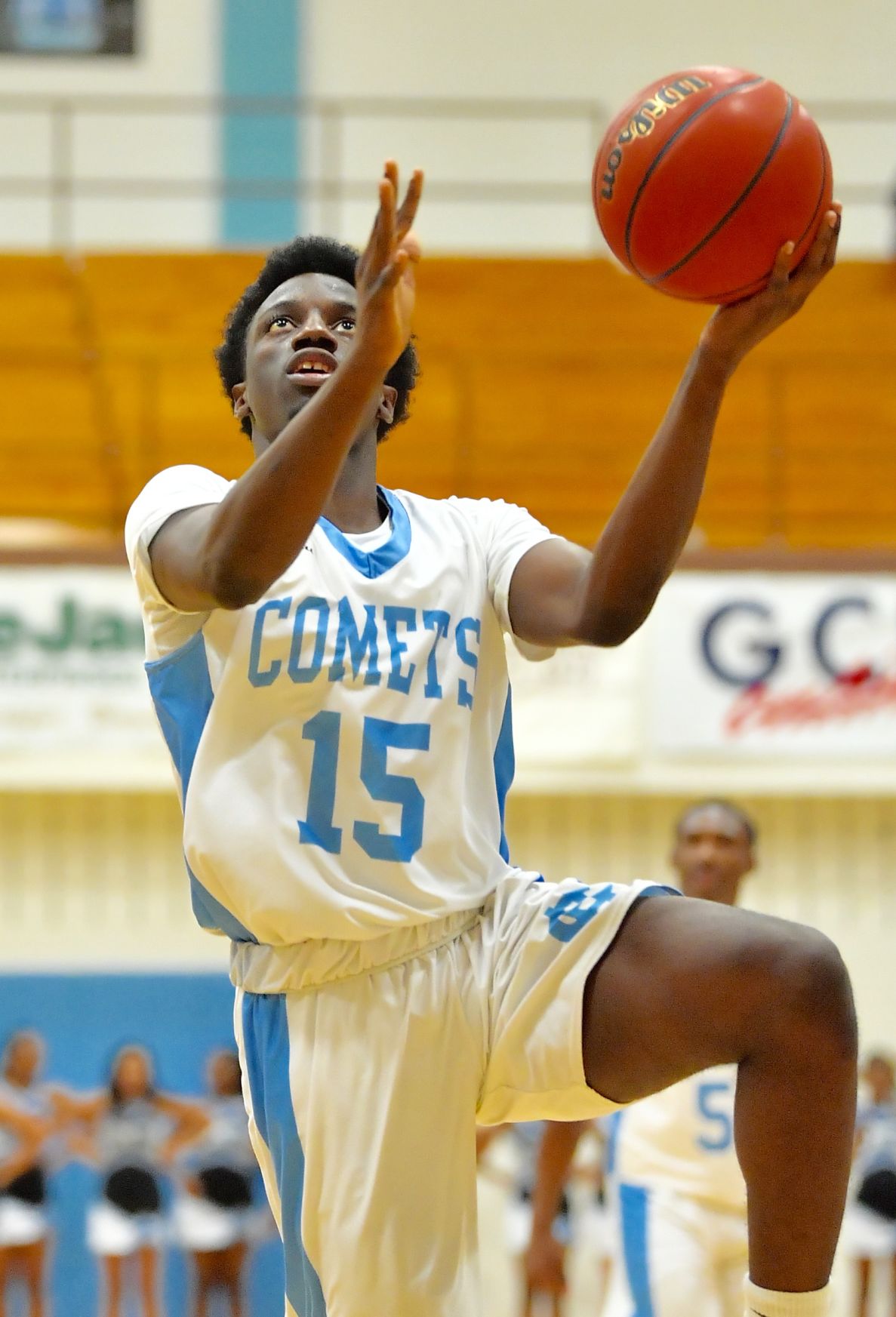 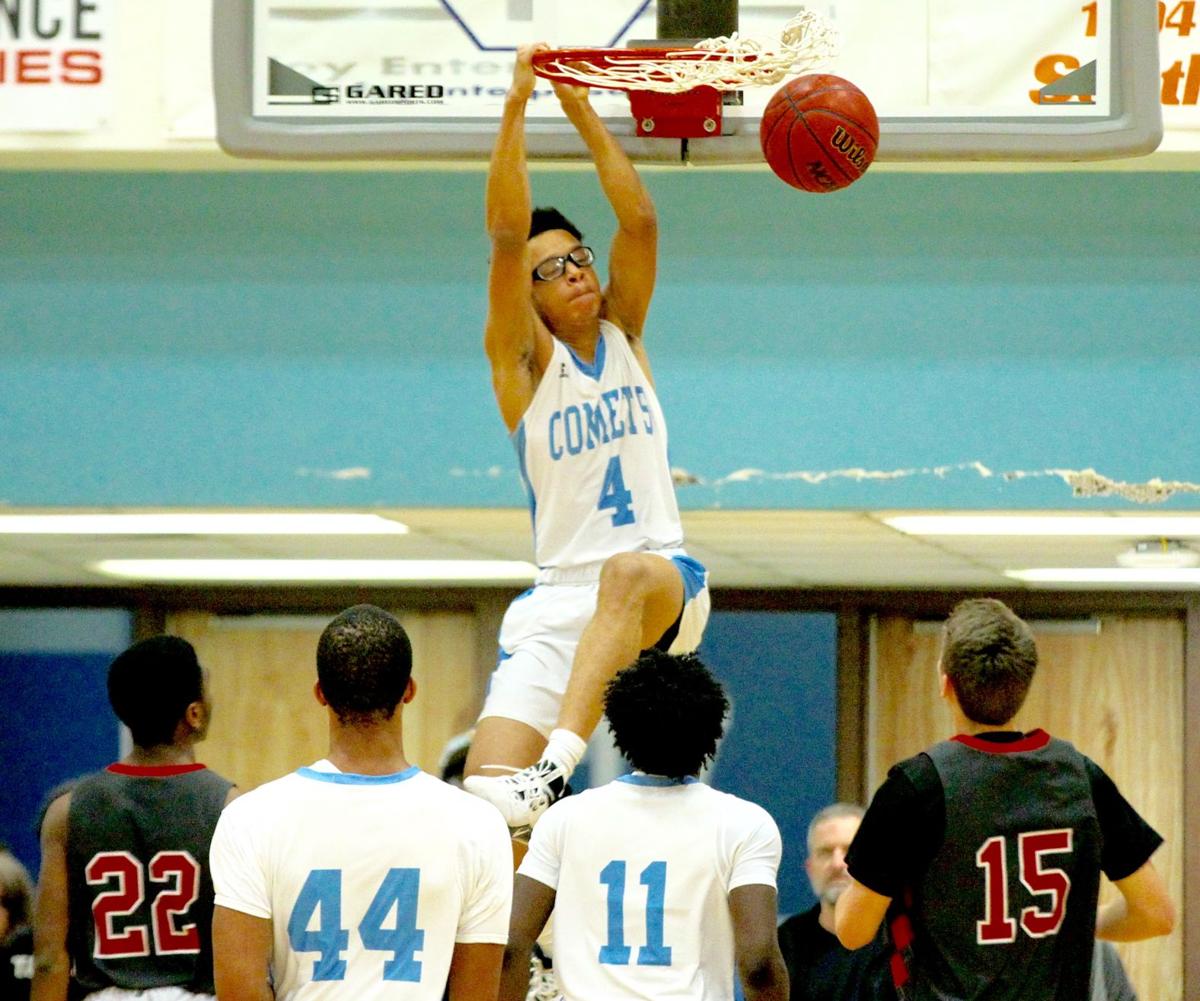 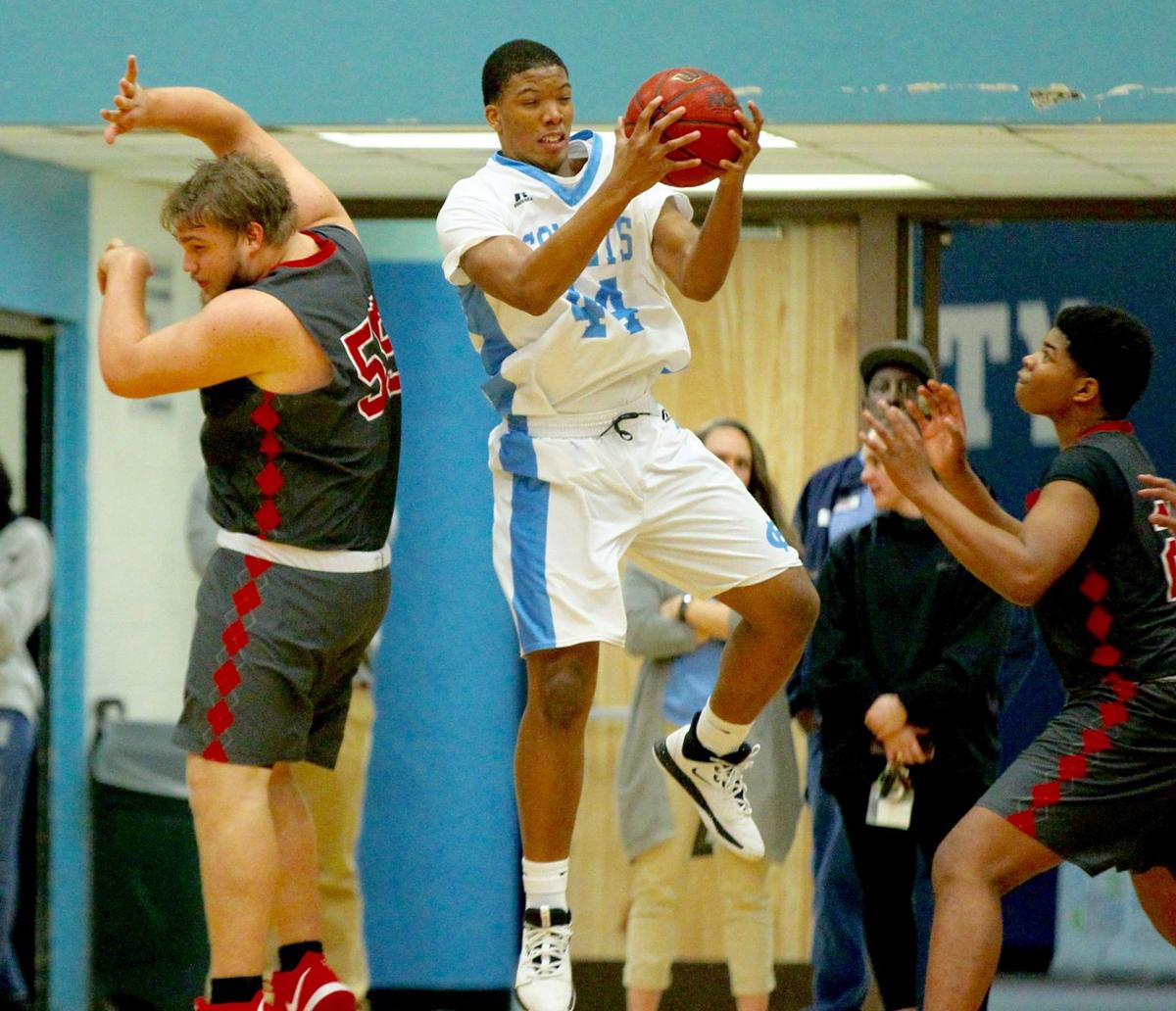 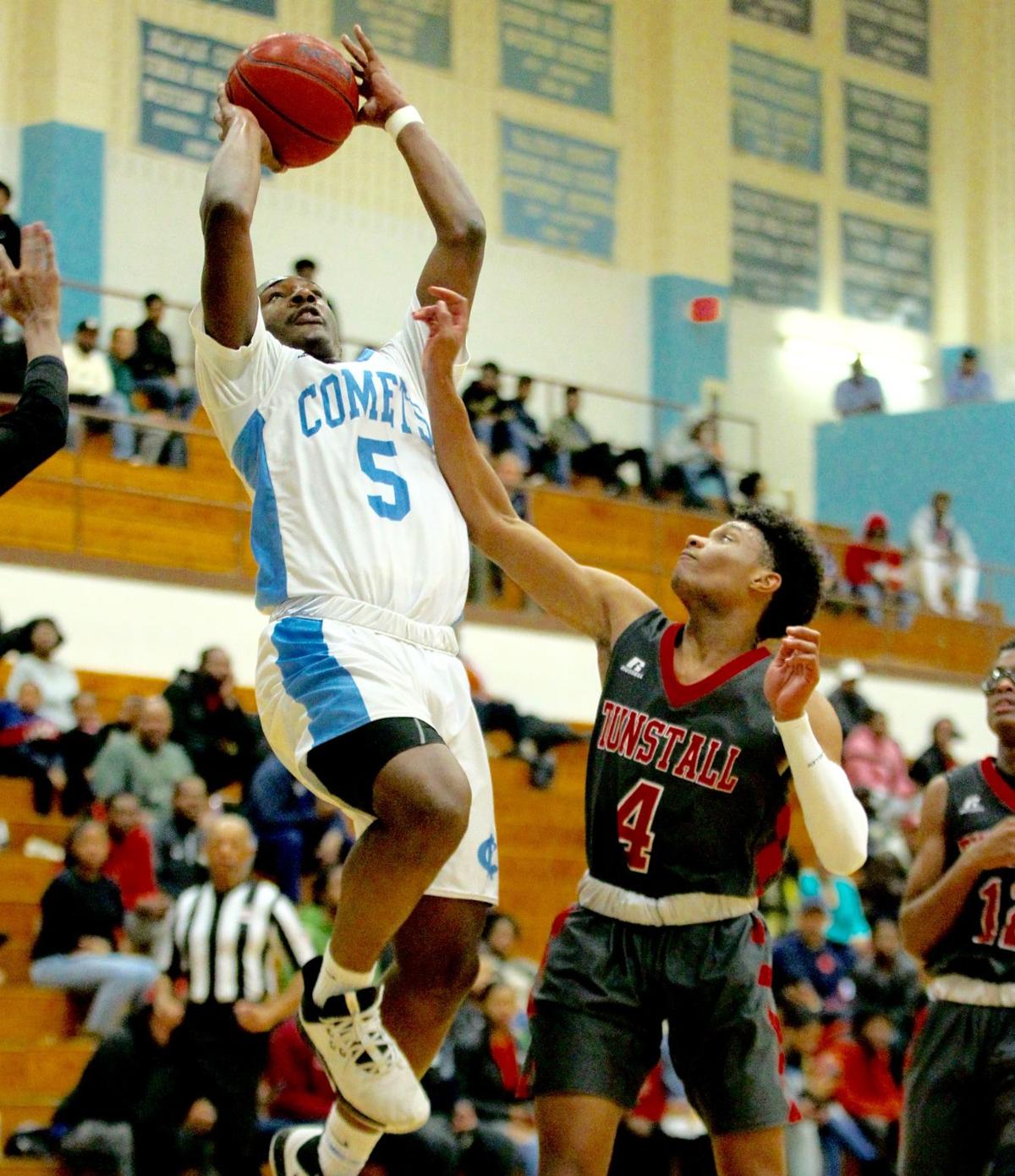 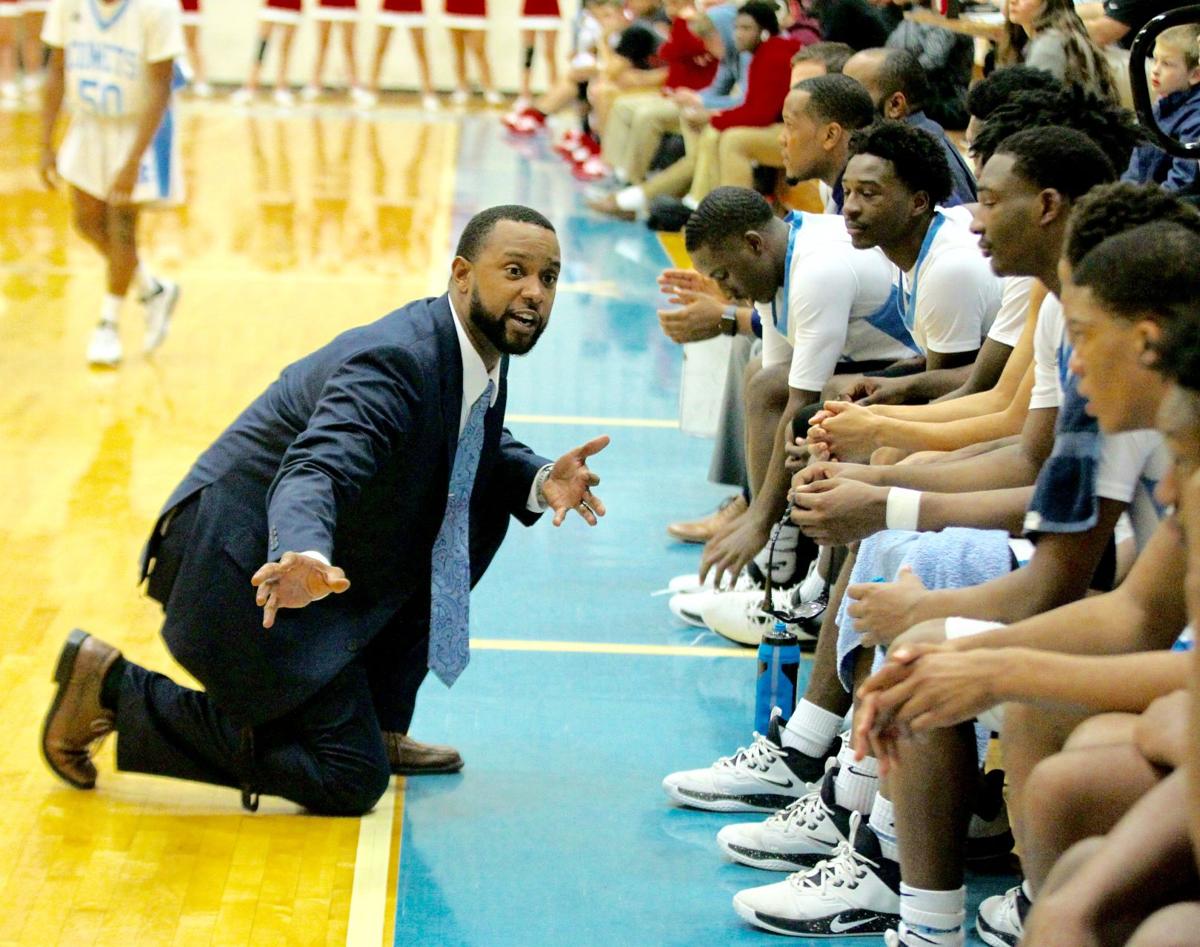 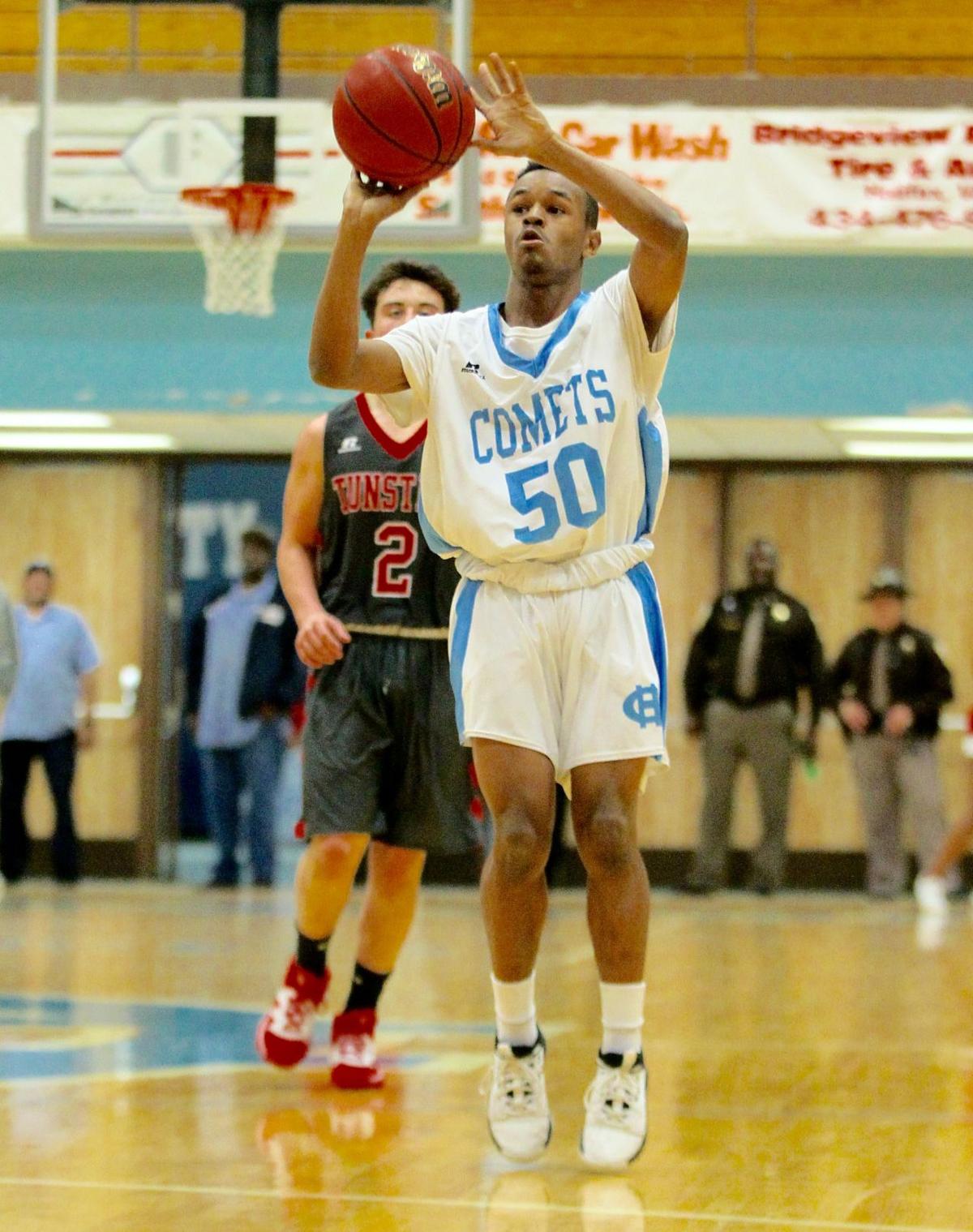 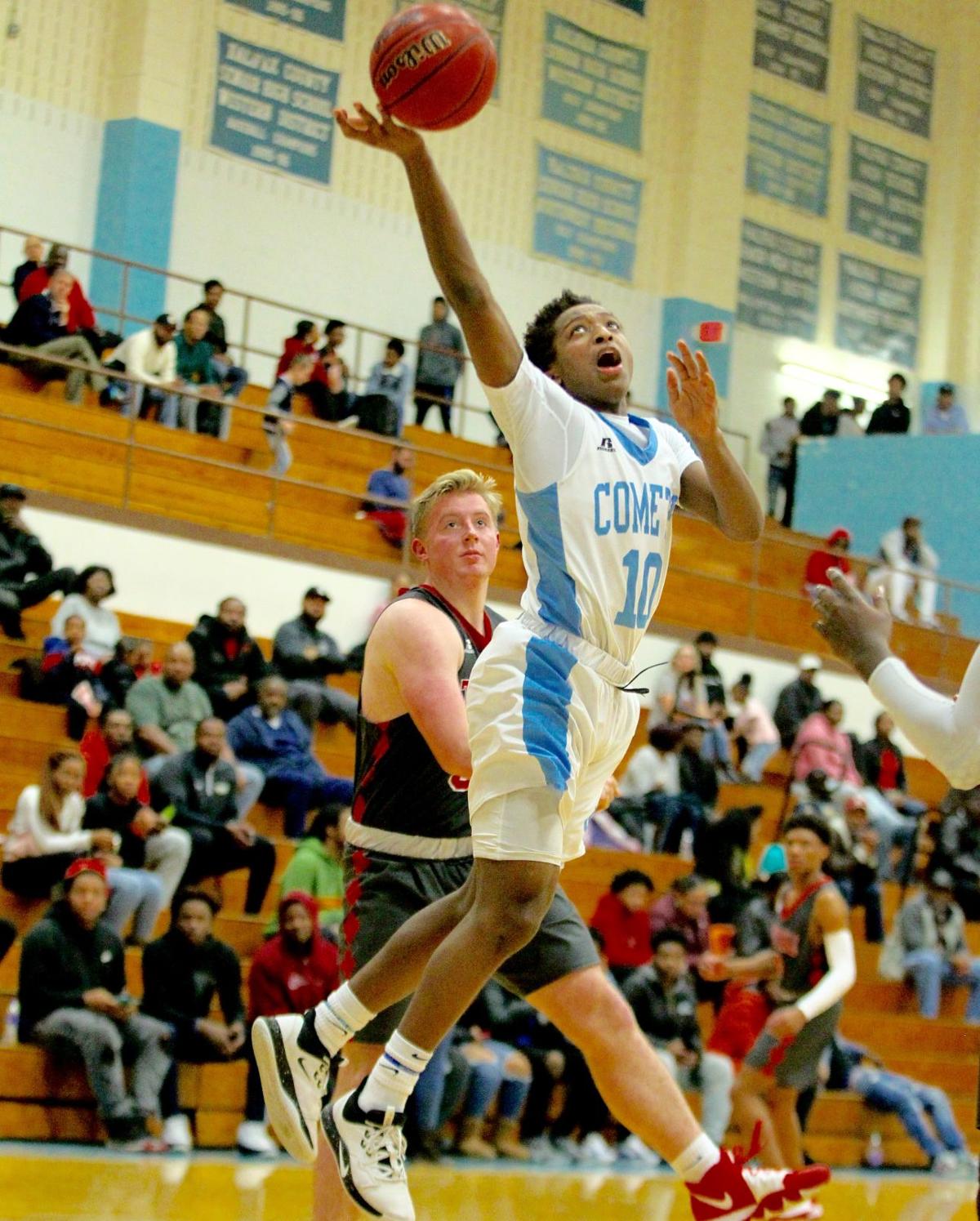 Halifax County High School junior Kevon Ferrell has spent much of the season playing point guard, a position not considered as his normal position. Instead of being the scorer he had often been in the past, he has been more of a facilitator, setting up his teammates to score.

The trio of 3-pointers Ferrell canned were among seven treys the Comets sank in their 25 attempts from behind the arc during the contest.

"It was just something that happened," Ferrell explained when asked about his team's proficiency with the longball.

"It was the defense getting us going, moving the ball around, teammates finding teammates and setting screens. We practiced it yesterday (Monday) and knocked down some shots."

"It was good for us to see the ball go into the basket, especially for Kevon," Williams remarked.

"This was the first game where he looked good offensively. Normally, he's getting other guys going. It was really good to see Kevon kind of get into a zone shooting the ball.

"Nathan (Comets assistant coach Nathan Lantor) and I were talking after the game about how in rhythm he looked, how good his shot looked. He looked more confident in his shot."

The Comets, a team that prefers playing an up-tempo, fast-paced transition game fed by its stifling defense, got a lot of points in that manner. Halifax County High School's defense forced Tunstall High School into 23 turnovers that fueled a lot of points for the Comets, but the Comets also benefitted from the longball.

"I thought all of our (outside) shots were in rhythm," Williams said.

"I didn't think we took too many quick shots. It's easy to shoot when you're in rhythm. We were penetrating, drawing two guys in, and kicking the ball out to open shooters. When you are doing that it makes the shot a little easier because you are shooting open shots. You're not shooting contested "threes" or shooting off of the dribble. You're shooting stand-still 3-pointers."

Tuesday night's win was the ninth victory in a row for the undefeated Comets who, now at 3-0 in district action, stand as the Piedmont District leader. Tunstall High School entered the game 6-4 overall and 4-0 in district play.

"Our record says we are undefeated, but we are just trying to take things one day at a time, one game at a time," Williams pointed out.

All 15 players on the Comets' roster scored, and everyone got a fair amount of playing time. Jhamad Lawson followed Ferrell in the scoring column with nine points, Jaden Waller scored eight points, Kameron Roberts chipped in seven points, and Keshawn Wells tallied five points. Everyone else scored four points or less.

The Comets got off to a quick start with Roberts hitting a 3-pointer just nine seconds into the game to put the Comets up 3-0. A free throw from Lawson and a basket from Ferrell gave the Comets a 6-0 lead just under two minutes into the contest.

Halifax County High School chalked up a 13-point lead twice in the first quarter, both times with a 3-pointer from Ferrell, and a basket from Waller with 14 seconds left extended the Comets' lead to 15 points at 22-7, a margin the Comets held at the end of the first quarter.

The Comets expanded their lead in the second period, taking advantage of a 7-0 run to jump to a 41-15 lead with less than two minutes remaining in the first half. Tunstall High School capped the first half with seven unanswered points, but the Comets ended the half with a 41-22 lead.

If there was any question as to what the final outcome of the game would be, the Comets quickly erased it. Ten unanswered points by the Comets in the first three minutes of the second half put them up 51-22.

The Comets upped their lead to 32 points when Ty'Shawn Medley hit a 3-pointer with 5:11 left in the game to make the score 67-35. That margin was more than good enough for the Comets as the Trojans were unable to muster a threat the rest of the way.