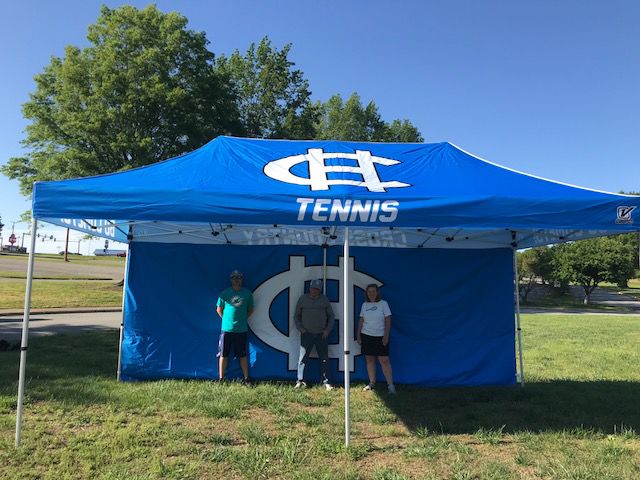 Velocita made the tents and Wade said Brad Allen was able to work with them to have their idea come to life.

Wade said that the idea for the tents came from attending one of his grandkids meets when he noticed that one of the participating schools had a large tent with the schools logo on it, and Halifax had a small tent with nothing on it.

Halifax boys tennis coach David Riddle said Wade came to him and coach Rebecca Saunders and told them he wasn’t going to let Halifax not have one of those tents.

“We both laughed, but the next thing I know Jimmy (Wade) was emailing me blueprints on designs,” Riddle said.

It was then that Wade decided he was going to do whatever he could to make sure that the Halifax teams got one.

The tent is in the traditional Comet blue, and the Halifax County High School logo is on the top and front. The front also has either tennis or cross-country on it to represent each sport.

Head girls tennis coach Donna Hudson says that since spring tennis season gets so many different kinds of weather throughout, that the tent is very much appreciated.

“This will be a great wind shield and will give us shade for watching when the sun is beating down on us,” she said.

Wade’s granddaughter and grandson are both on the cross country team, and his grandson also is a member of the boys tennis team. Wade, who also coached youth sports for a number of years, said he always used to tell his players “you play like you look” and with this tent, they will look as good as anyone else.

Riddle and Hudson praised Wade and his wife for the continued dedication to helping with both the cross country and tennis teams.

“Not only have they always been willing to help with things that we need, but they are always there to cheer on and congratulate the Comet athletes,” Riddle said.

“I can’t thank the Wade family enough for this. Our teams will be well shaded and represented well with this generous gift,” Riddle added.

“They are always among the first to show up when it’s been raining and we need to blow the water off of the courts,” Hudson said. “It was really outstanding of Jimmy (Wade) and his wife to see this need and fill it. We certainly appreciate the support that the Wade’s have given with this tent and with many other things over the years,” Hudson added.