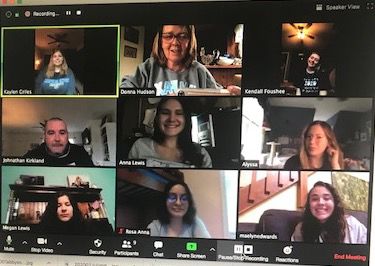 Members of the Halifax County High School girls tennis team take part in a in a Zoom video call with their coach, Donna Hudson, on Monday afternoon. 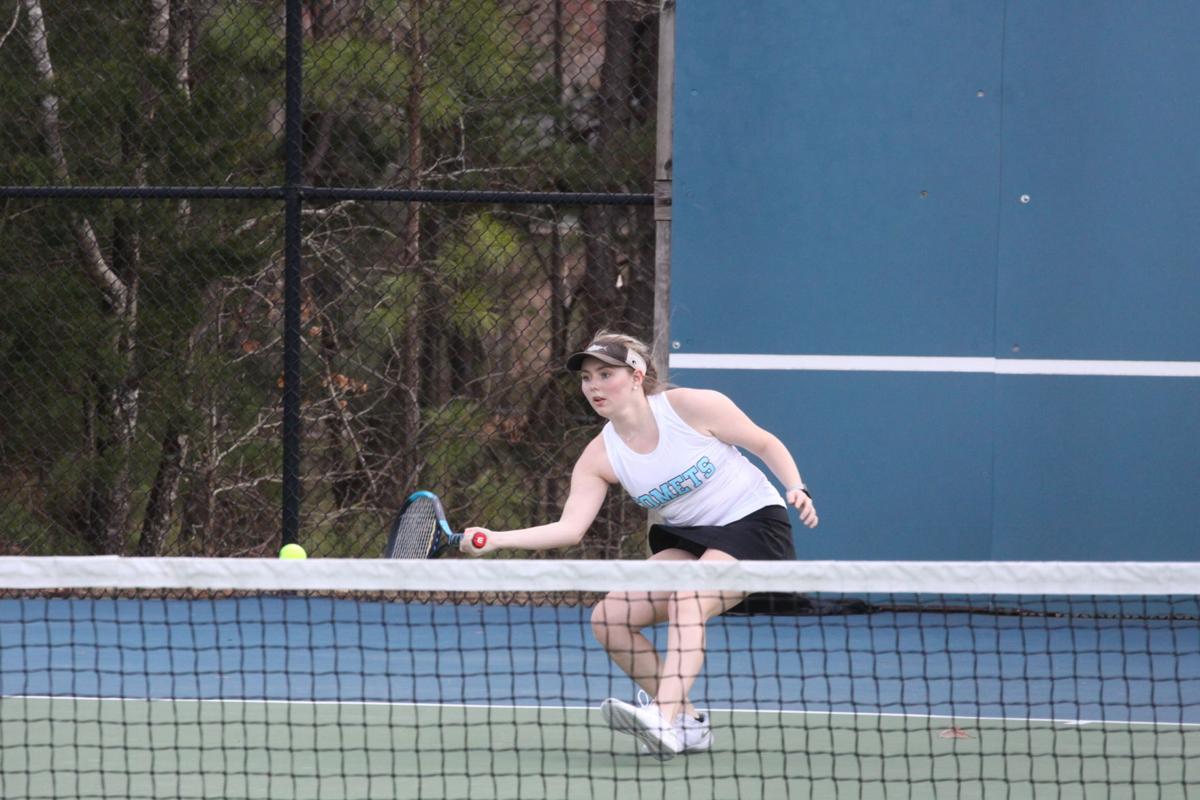 Kendall Foushee, the No. 1 seed for the girl’s tennis team, goes low to return a shot from her opponent from Jefferson Forest in March.

Members of the Halifax County High School girls tennis team take part in a in a Zoom video call with their coach, Donna Hudson, on Monday afternoon.

Kendall Foushee, the No. 1 seed for the girl’s tennis team, goes low to return a shot from her opponent from Jefferson Forest in March.

“Heartbroken doesn’t even begin to describe it.”

Those were the words of Halifax County High School senior Kaylen Griles, who along with four other senior members of the Comets girls tennis team lost their season to the coronavirus pandemic.

Griles, along with Kendall Foushee, Meg Lewis, Anna Lewis and Nya Brandon, and their underclassmen teammates were looking forward to what they all agreed was going to be their best season in a long time.

Instead, they were all in front of their computer or phone screens on a chilly rainy Monday afternoon participating in a Zoom video call with their coach, Donna Hudson.

Hudson has held these calls — a virtual video conference where each participant joins and they can hold conversations while being able to see and hear each other — at least once a week and sometimes more since the schools closed last month.

On this particular day there were seven members of the team along with their coach participating with each one discussing how they were doing with the current situation, how they were adapting to online schoolwork and their future plans.

For the seniors on the team there was obvious sadness and frustration with their final season as a member of the Comets tennis team taken away from them, as well as senior prom and other special events seniors look forward to each year.

“You see everyone posting their prom memories and senior night memories and I am not going to get to experience that and it feels like we are missing out on a really important part of our lives,” Griles said.

Foushee said her senior season was going to be special. She recalls walking off the court after winning her match in the teams first and only scrimmage of the year and thought to herself that this was her year.

She’s been a part of the girls tennis team since she was in eight grade and gradually worked her way up the ladder in the ranks. By her junior season, she was the No. 1 seed for the team.

Foushee was once again the No. 1 seed on the team in her senior season, a feat Hudson said is unprecedented.

Being out on the court and being a part of the team is something that she treasures.

“I really miss being out on the court, that was my happy place,” Foushee said. “When I was frustrated or mad about something that happened at school I could go out on the court and take my anger out,” she added.

Last season as a junior Foushee was a big part of the team, playing well in regionals and also winning a singles match and a doubles match in the state tournament. Now, she is left to wonder what could have been.

Hudson also wonders what could have been. She knows the amount of talent that her team had headed into the season, and felt they had the potential to do things this year that no tennis team in the past had done.

Last year the team went to regionals and they were one game away from the state tournament, and this year they had set goals to do just as well and better than last year.

As for her future, Foushee plans to obtain her bachelors degree in nursing and then her nurse practitioners license. She is either going to go to Liberty University in the fall or start out at community college. Foushee wants to become a pediatric nurse practitioner in the future.

While the other seniors did not spend much time in the top six on the team, they played just as much of a vital role on the team as the top six.

Griles saw competitive playing time last season, and Hudson called her a very competitive player. Griles began playing on the team in her sophomore year and formed friendships with her teammates she won’t soon forget.

“It really breaks my heart that I wont get to see my friends compete, and I wont get to play and go to states because I know we were going to states,” Griles said.

Megan Lewis started playing on the team in eighth grade. She says going to the away matches and supporting everyone as they play and just hanging out with her teammates is what she is going to miss the most.

While she hasn’t officially committed yet, Lewis plans on attending West Virginia University in the fall to major in aerospace engineering. She also is hopeful that she will be able to keep playing tennis in college with the club team.

Lewis, like her other teammates, is trying different things during this time, and she says that recently she has been doing a lot of baking. The teammates joke about having her bring them some of the things she has been trying.

For Anna Lewis, her tennis career started her junior year. She steadily improved throughout that season and coming into her junior year she set a personal goal to make it into the top six at least once this year. She said she was fine if she didn’t make it, but was improving every day in practice and that sadly she will miss the opportunity to continue competing for a top six spot.

“I just knew we were going to states because we are amazing and awesome teammates. We cheer each other on, and we are always there for each other,” she said.

Anna Lewis will be attending Jefferson College of Health and Sciences next year and is majoring in biomedical sciences. She says that she hopes to apply to medical school in the future and become a doctor or surgeon.

Hudson painted a scene of the teams’ last practice of the year as the coronavirus pandemic worsened and things started to change. Hudson said their last practice was on a Wednesday, and had just got word that the teams’ scrimmage on Thursday had been canceled because they didn’t want the teams traveling.

Hudson said that at 5:30 p.m. when practice was ending one of the players asked if it was time to go.

“I remember saying that I was staying every minute I can because I don’t know if we will get to come back,” Hudson said.

“We didn’t know at the time, but you just had a feeling that something unprecedented was going on, and we better grab every second,” Hudson added.

It would turn out that Hudson was right and soon after she said those things, the school year and tennis season was over.

For the seniors on the team, they had a last day of school and a last practice and did not realize it. They didn’t get to enjoy those last few days of walking the halls as students who had just finished their high school career.

They didn’t get the senior night celebration on the courts before their last home match in their careers. It was all over in the blink of an eye, and for now they are left to meet weekly over those Zoom calls and talk about what could have been for this talented group.