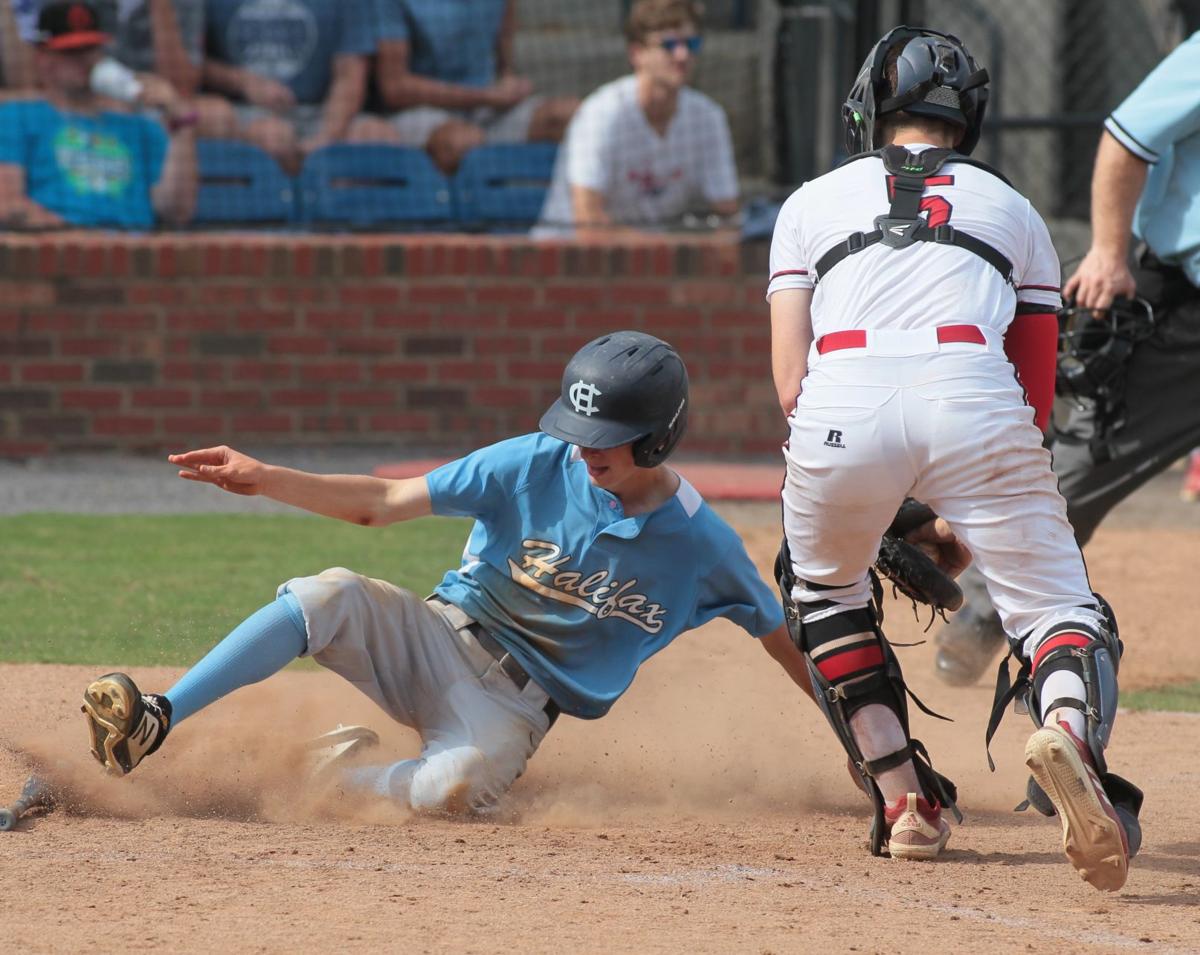 Halifax County High School’s Luke Fulcher slides across the plate to score a go-head run for the Comets in the top of the fourth inning of the June 2019 VHSL Class 5 State Tournament semi-final game against Mills Godwin High School at RF&P Park in Glen Allen. 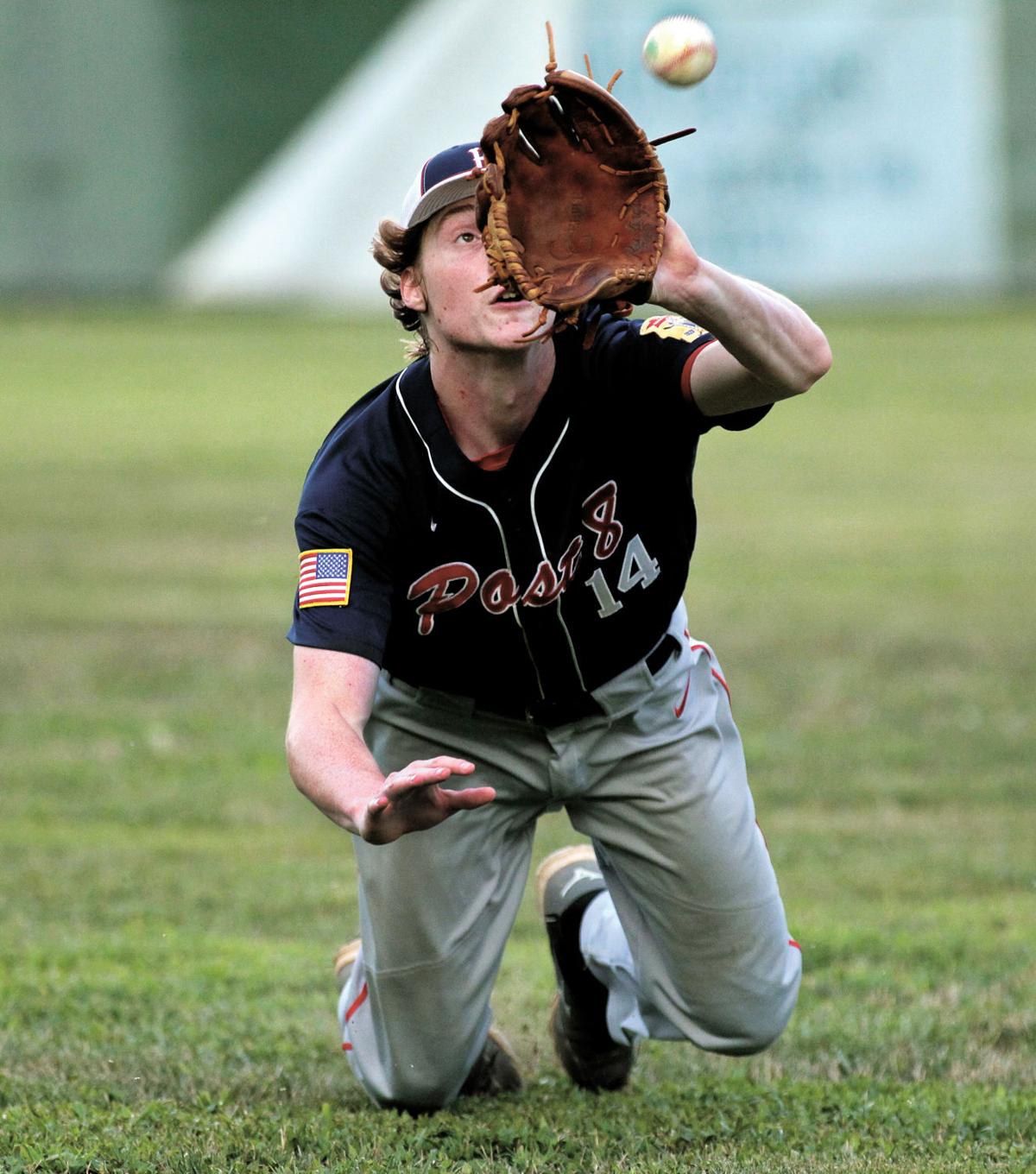 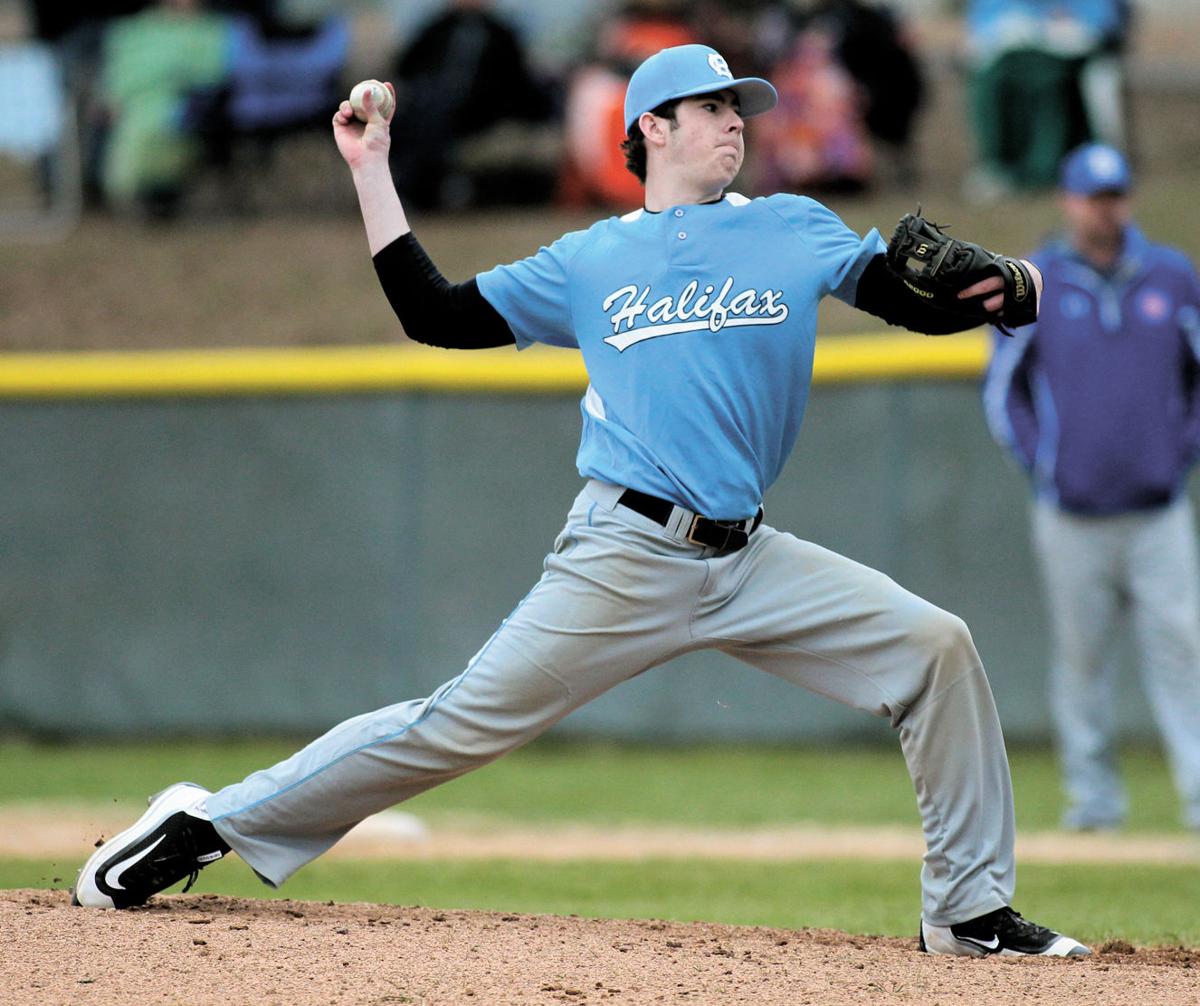 Halifax County High School pitcher Christian Worley fires a pitch to the plate during a March 2019 game against Dan River High School. Worley tossed a no-hitter with 16 strikeouts in the Comets’ 5-0 win. 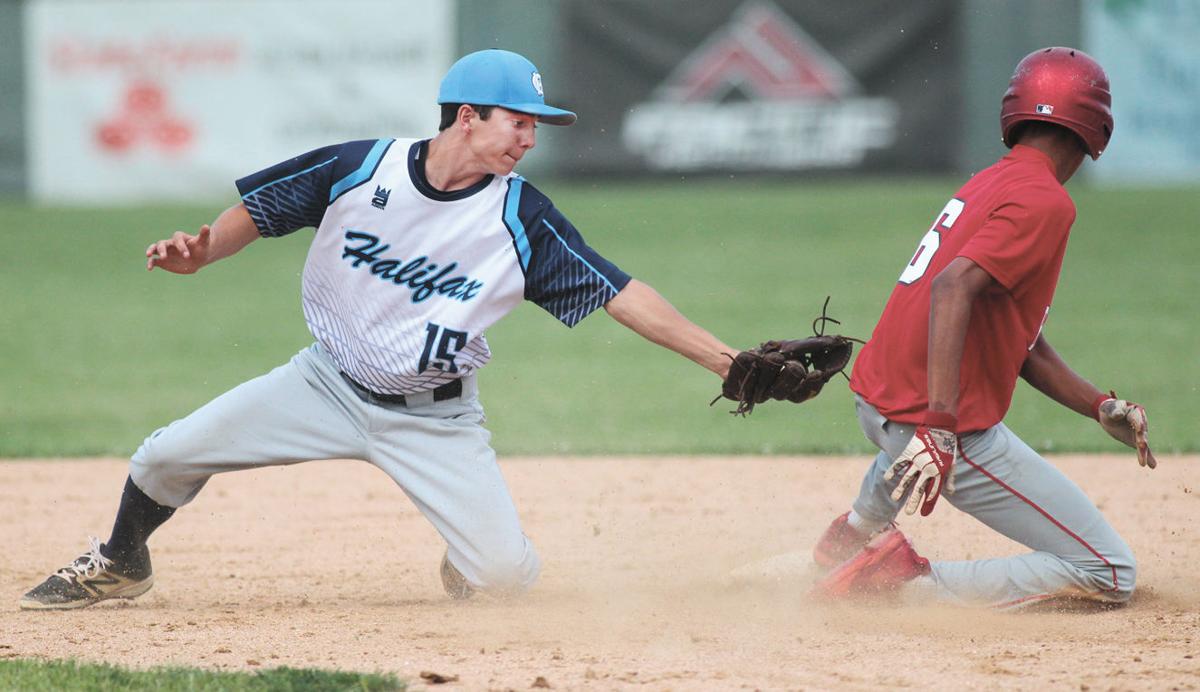 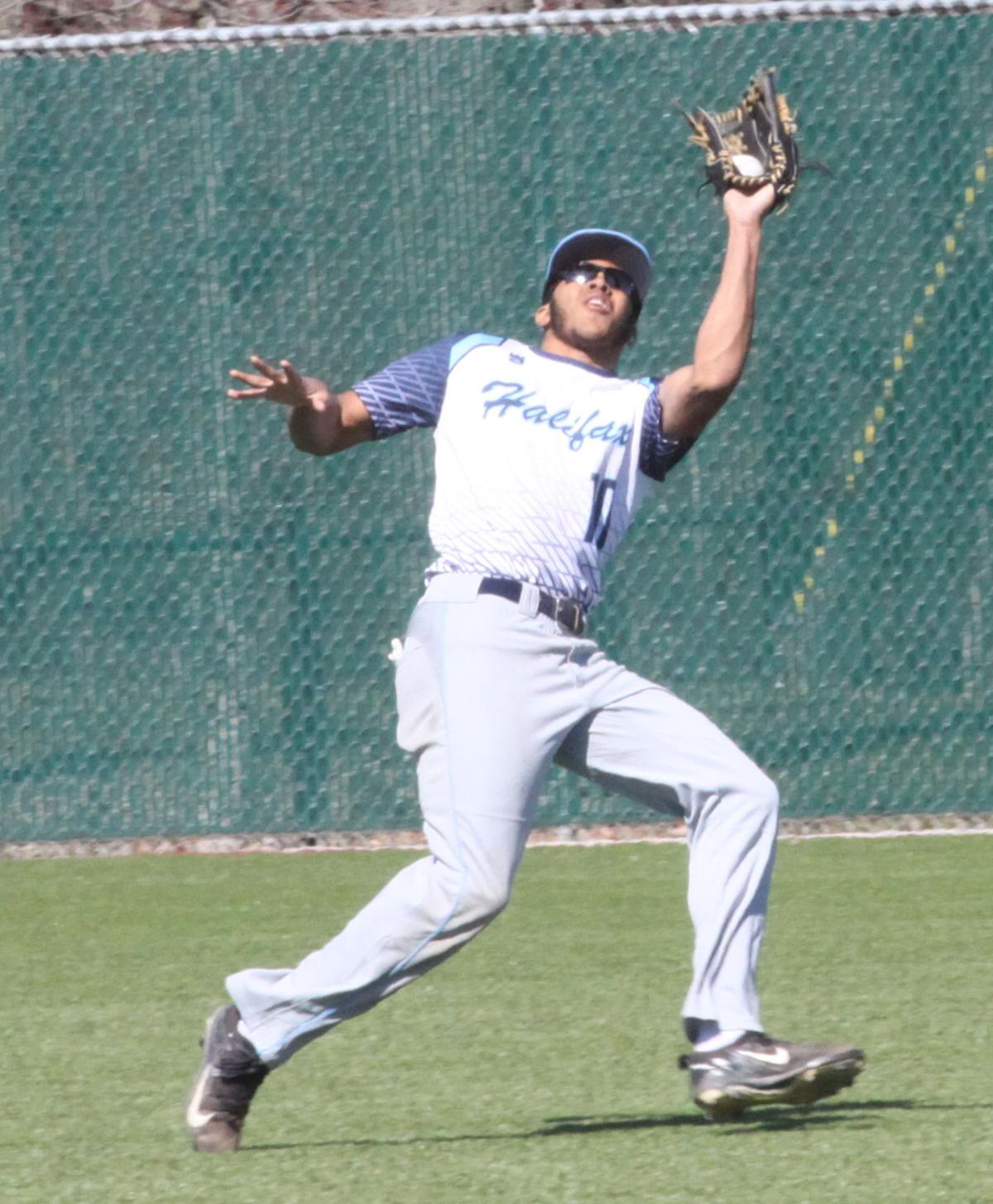 Thomas Lee goes back to make the catch on a long fly ball during a March Heritage Jamboree at Heritage High School in Lynchburg.

Halifax County High School’s Luke Fulcher slides across the plate to score a go-head run for the Comets in the top of the fourth inning of the June 2019 VHSL Class 5 State Tournament semi-final game against Mills Godwin High School at RF&P Park in Glen Allen.

Halifax County High School pitcher Christian Worley fires a pitch to the plate during a March 2019 game against Dan River High School. Worley tossed a no-hitter with 16 strikeouts in the Comets’ 5-0 win.

Thomas Lee goes back to make the catch on a long fly ball during a March Heritage Jamboree at Heritage High School in Lynchburg.

Halifax County High School baseball is known throughout Virginia as being a perennial contender for the state championship.

Teams near and far know the reputation that Halifax baseball has and for those that grow up in Halifax, playing for the varsity baseball team means more than many realize.

The seniors on this years team will not get to play their final season on the diamond, but for most being a part of the team in the first place was something they have dreamed about since they were young.

“My dad took me to the high school games when I was in elementary school, and I would watch them and they were the best players ever and then to be able to come up and make the team was the most exciting thing ever,” Luke Fulcher said.

Christian Worley, who will be continuing his baseball career at Virginia Tech next year recalls sitting at those games as a kid and dreaming of one day being a part of the team. “We would all go to the high school games as kids and look up to the older players, and we would just be sitting there watching the game and thinking this is where I want to be one day and who I want to be,” Worley said. “Getting to start and play was amazing and looking back when I was younger seeing that I made it,” he added.

Jackson Dunavant grew up wanting to be like those players on the high school team as well, and he said that they look up to those players and try their best so that they can be a part of it.

Baseball in Halifax County has been special for many decades, and many of the seniors on this years team had fathers and other family members who also played for the Comets when they were growing up, and being able to follow in those footsteps meant a lot to them.

One of those players is Blake Duffer. “It meant a lot to me because my dad did it, and it was a bucket list item to have the Halifax jersey on,” he said.

“To be able to go out and play and have that blue and white jersey on that says Halifax, I was always really proud of that,” Dylan Newton said.

Shabazz Buster didn’t start playing baseball until middle school, but he knows the pride that being a part of Halifax baseball brings. Buster didn’t think he would ever be able to be a part of the team, and once he made it on the team it was “a big blessing.”

The seniors on this years team echoed coach Day’s thoughts on the upcoming season. While the Comets lost a lot of production on last years team due to graduation, the members of this years team were optimistic about their chances to continue the dominance that teams the last few years have had.

Worley thought that this years team had just as good of a shot as last years team to go back to the state tournament. He praised the teams chemistry and felt that they could have pulled it together and had a good run at it.

“This team was great and could have done something special,” Thomas Lee said.

“All the guys and especially the seniors had real high expectations, and I felt like we had a good chance of going far again,” Newton said.

Duffer wasn’t sure what to expect from this years team coming into the season, but said once they started practicing together that everyone developed well quickly, and he thought they were going to have a chance to do something special this season.

Dunavant wanted the chance to keep the successes of Comets baseball going as his class finished their high school careers. “We have been going to states and been successful for the last three of four years, and we wanted to keep it going,” he said.

While they will never know how those expectations would have played out one thing is for sure, missing the chance to play their senior season is hard on them.

“I couldn’t get my senior year in baseball and that is what you look forward to,” Jared Dawson said. “It is really heartbreaking, I was really looking forward to playing my last year and going out there on senior night,” he added.

“You play so long and worked up to your senior year, and it got taken away from us,” Fulcher said. Fulcher went on to say that for those that are going to play baseball in college, losing the season may not hurt as much, but he will probably not be able to play baseball ever again. This year also meant a lot to him because he was going to be a starter after spending last year behind several good players, and this was his season to showcase his skills.

“Senior year got ripped away from us,” Worley said. Lee added that it was a bad feeling and tough to swallow that his senior year of baseball would not happen.

As the Virginia High School League announced late last week that the spring sports season was officially canceled, coach Day is hoping to have a camp or a showcase for his players this summer if they are able to, and Dawson echoed what every senior on this years Halifax baseball feels, “I would love to play a game with my team one last time.”