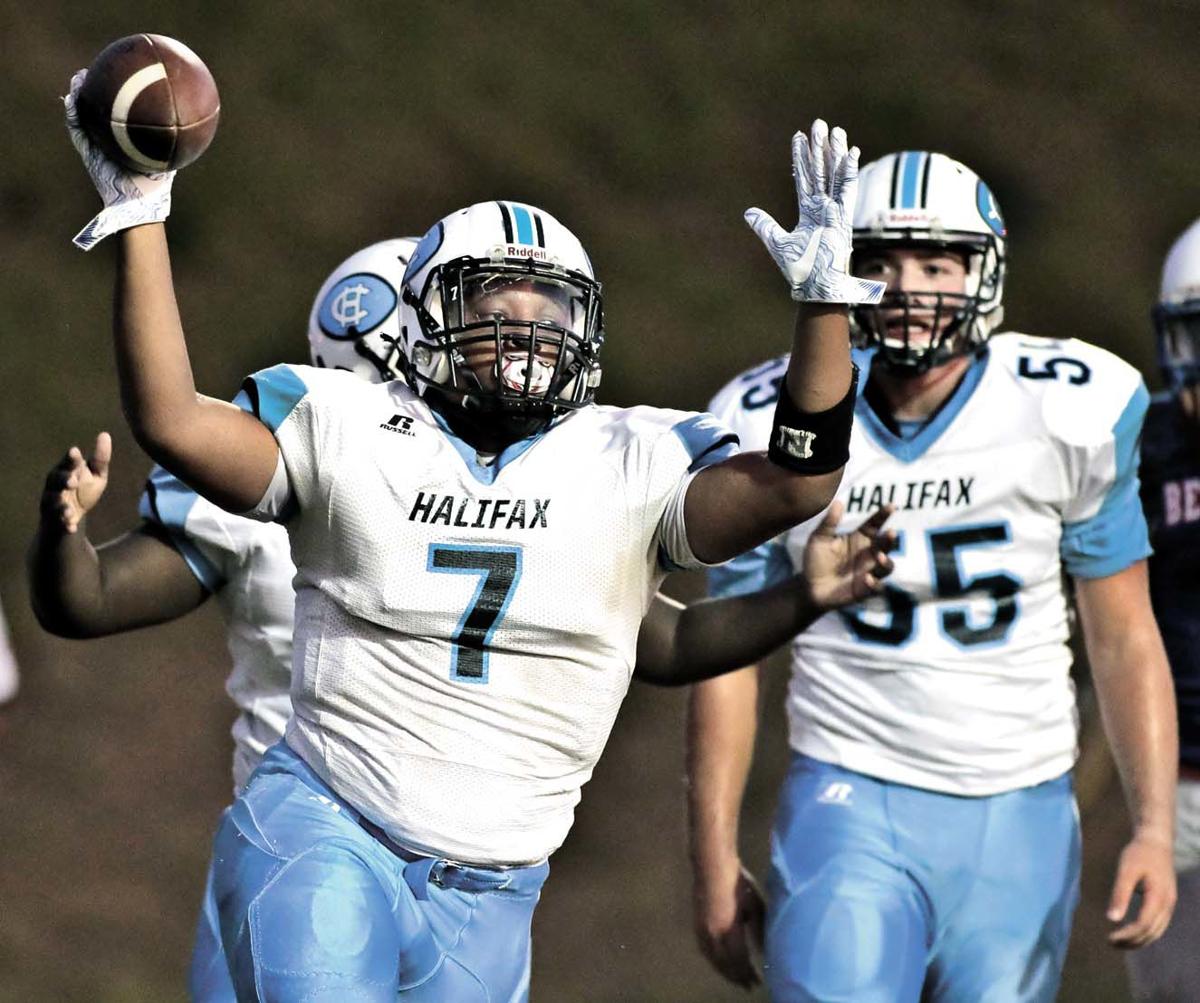 Halifax County High School senior linebacker Zyon Wilson (7) celebrates after recovering a Bassett High School fumble in the end zone for a touchdown during a Piedmont District game between the two schools. 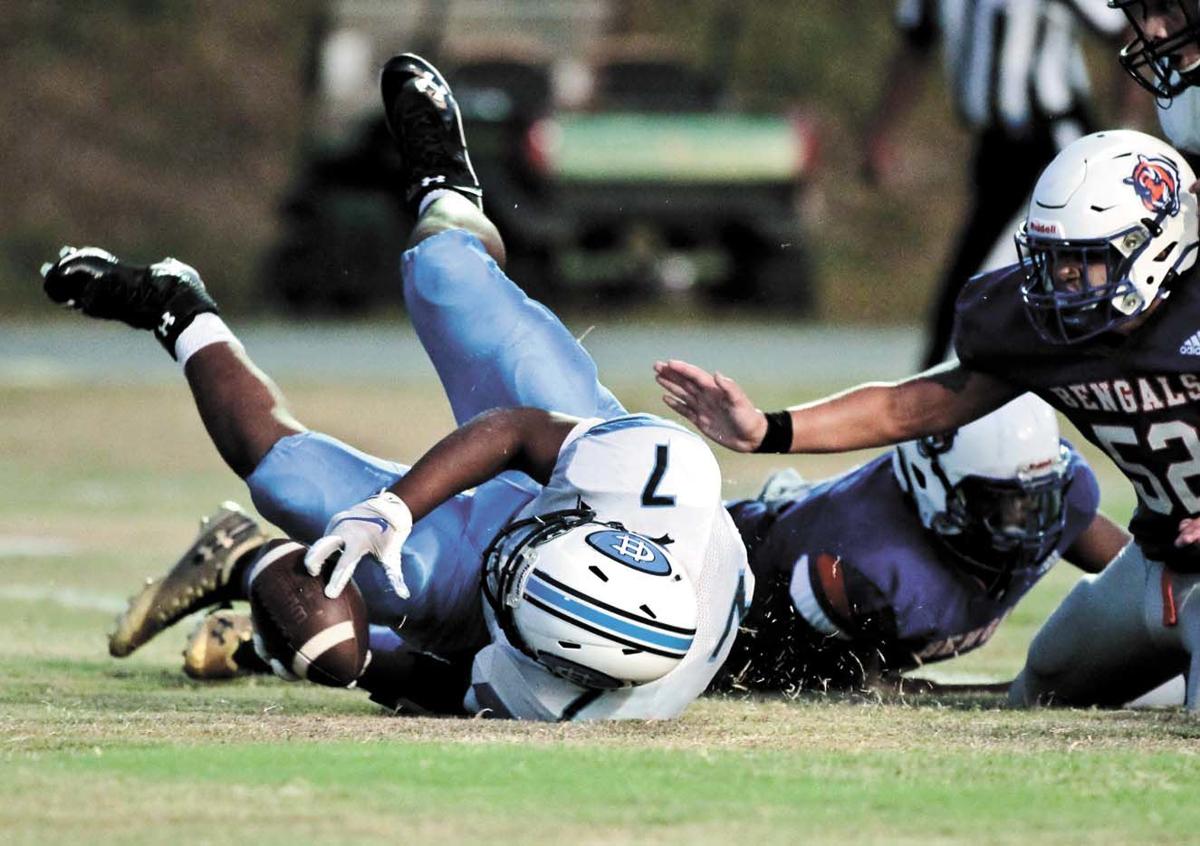 Halifax County High School senior linebacker Zyon Wilson (7) recovers a Bassett High School fumble in the end zone for a touchdown during a Piedmont District game between the two schools.

Halifax County High School senior linebacker Zyon Wilson (7) celebrates after recovering a Bassett High School fumble in the end zone for a touchdown during a Piedmont District game between the two schools.

Halifax County High School senior linebacker Zyon Wilson (7) recovers a Bassett High School fumble in the end zone for a touchdown during a Piedmont District game between the two schools.

West Liberty is a Division II school in the Mountain East Conference.

For Wilson, this is a dream that began when he was just 4 years old.

Wilson played recreation league football and also competed on several travel teams growing up, but he remembers well, a time after one of his Pee Wee football games, telling his mom that he wanted to play football for the rest of his life.

“God gave me the talent to play, so that’s what I am doing,” Wilson said.

Wilson recalled two coaches — he could only remember their last names of Long and Shealy — coming to Mary Bethune to watch the children play recreation league football, and those two reached out to him about playing middle school football. He was able to make the middle school team his sixth grade year and was one of two sixth graders to start that season.

Those two coaches were major factors in his development as a football player.

After his junior year of high school, with the help of Lenzy Terry, was able to get into several camps during the summer to show his skills to recruiters from different colleges. Wilson garnered interest from several Division III schools and also NAIA schools, but Wilson kept working hard and into his senior season.

Wilson earned honorable mention for his play as linebacker in the Piedmont District, and he also earned a spot on the Blue-Grey All-American Bowl that showcases some of the top athletes across the country. Shortly after returning from the All-American Bowl, Wilson received his offer from West Liberty University.

With more than 10 offers on the table for him to choose from, Wilson decided that heading to West Liberty was the right choice for him.

Wilson has been hard at work staying in shape for college, lifting weights on a weight bench that him and his mom went and bought when they realized that all of the gyms were going to be shut down. Wilson also has been doing yard work, moving logs and cut down trees to help build muscle as well. Anything that he can do to stay in shape and keep getting bigger he is doing.

He was a member of the wrestling team this season for the first time, and made it to the state tournament. Wilson also was a member of the track team where he participated in the discuss and shot put events. Wilson says that his participation in these other sports has been a big part in his development as an athlete.

Halifax head football coach Grayson Throckmorton said he is very happy for Wilson for continuing his football career at the next level.

“I think its great. He is getting a chance to go to school and get a college degree and get a chance to play football at the college level, and I think that’s awesome,” Throckmorton said.

He also went on to talk about how Wilson moved from his primary position as linebacker to help the team out on the defensive line at the end of the season. “A big part in an individual is looking out for the team first, and he did that toward the end of the year,” Throckmorton added.

When asked who was instrumental in getting him to where he is today, Wilson had several people who he wanted to thank.

“I want to thank my mom, she has been by my side ever since I started, coach Jennings, coach Shealy, both of my uncles, they put me in football and trained me, Lenzy Terry got me lined up with trainers this summer, my friends and family for pushing me and telling me to keep going, my church family St. Matthew, and my football, wrestling and track families.”