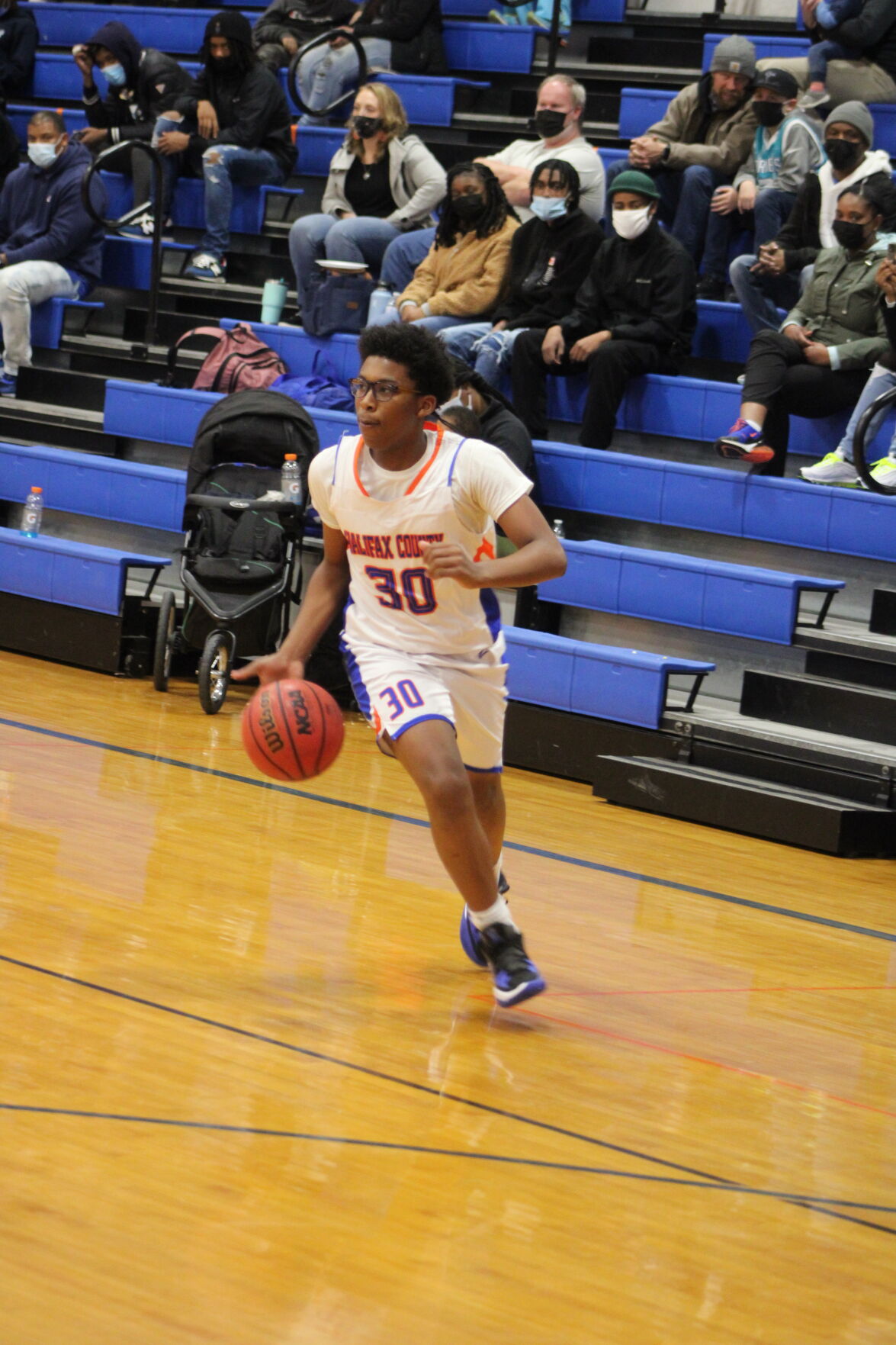 Halifax County Middle School Lion Jahmari Jones-Hutcherson (30) gets out on the fast break before attacking the paint in the Lions’ dominate 49-15 win over Patrick County on Monday. 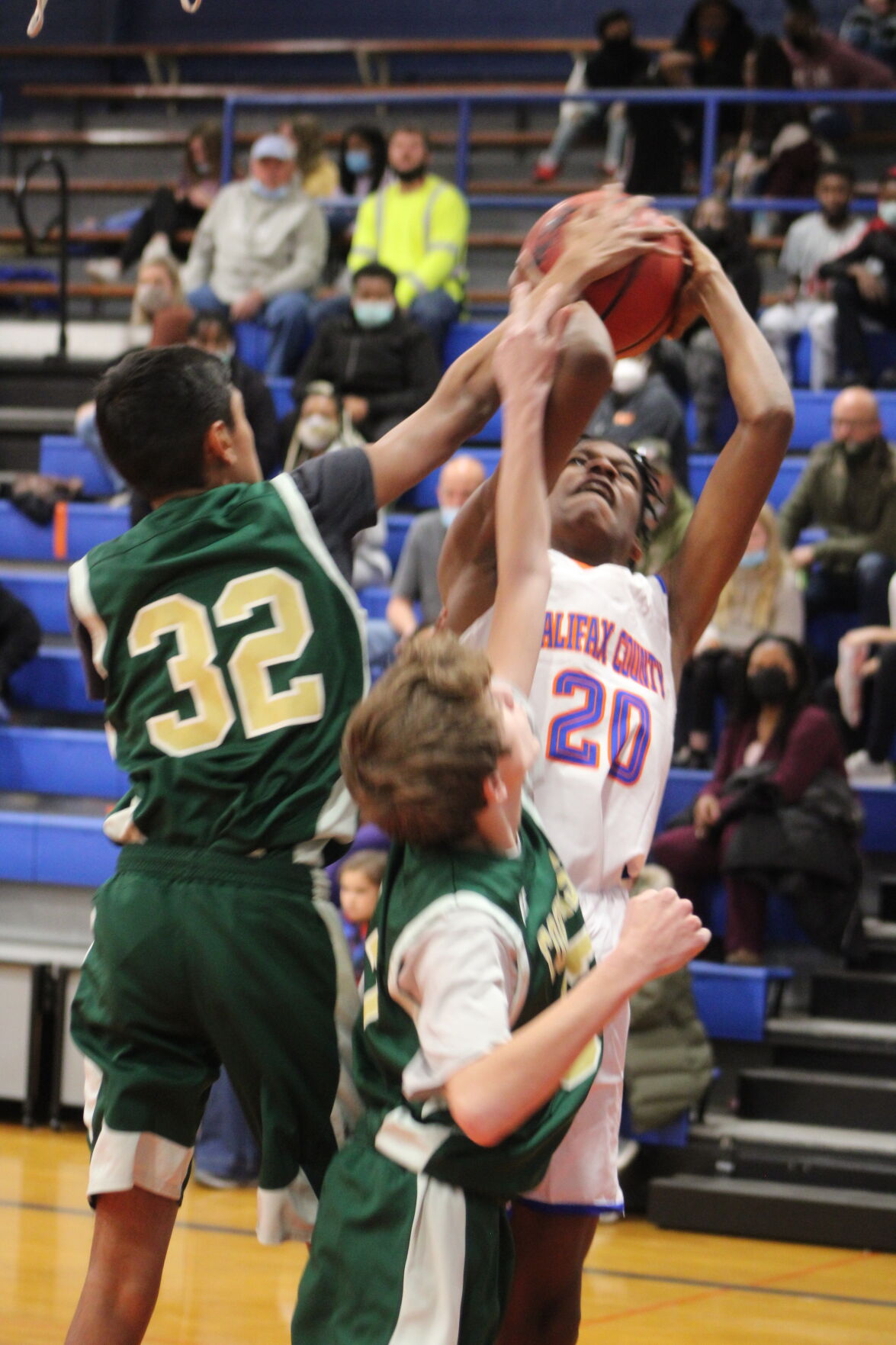 Halifax County Middle School Lion Darius Hamlett (20) gets hit by a Patrick County defender sending him to the free-throw line in the Lions’ 49-15 win over Patrick County on Monday. 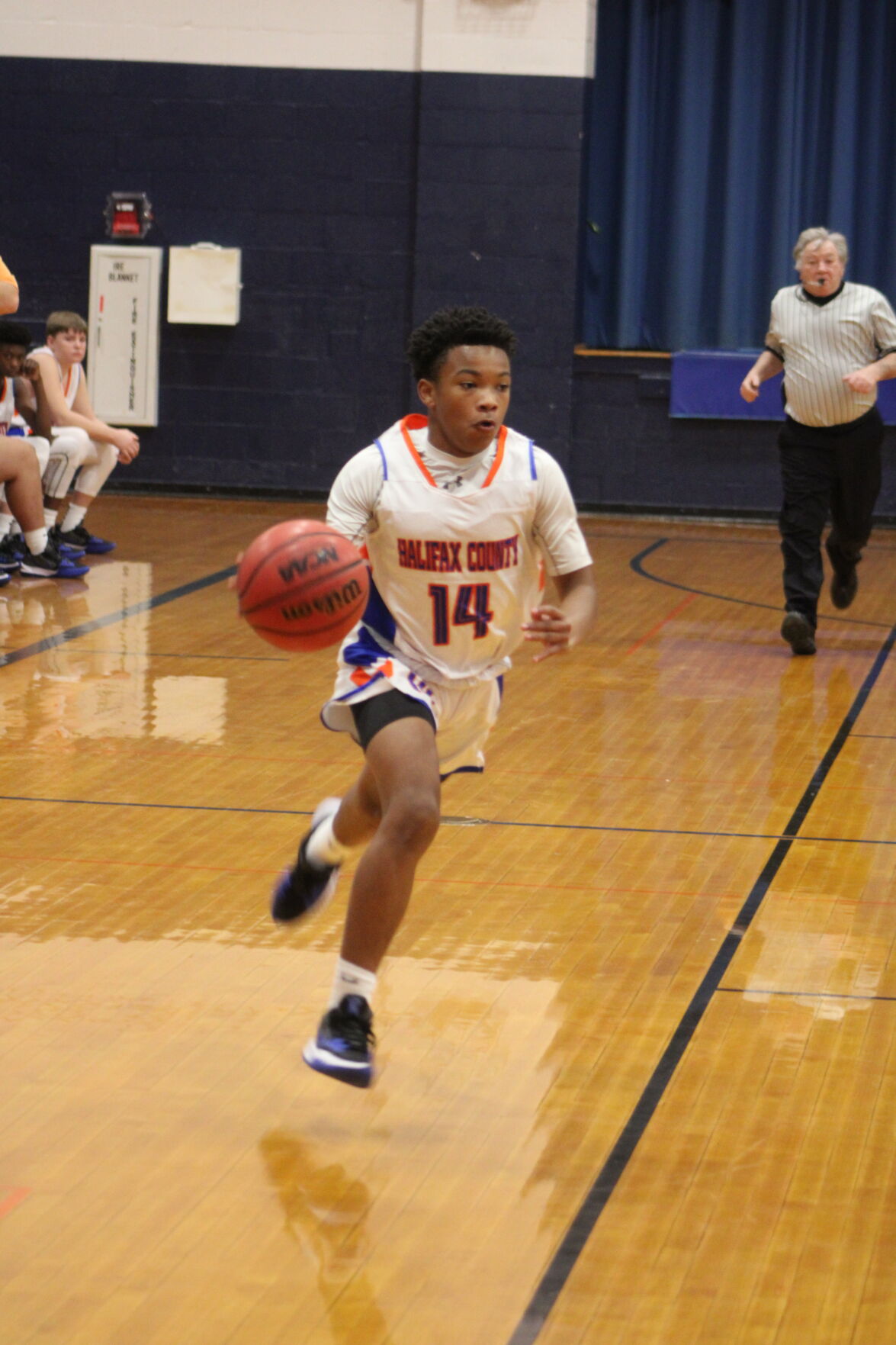 Halifax County Middle School Lion Montavious Marrero (14) attacks the paint before making an impressive up and under layup in their 49-15 win over Patrick County on Monday. 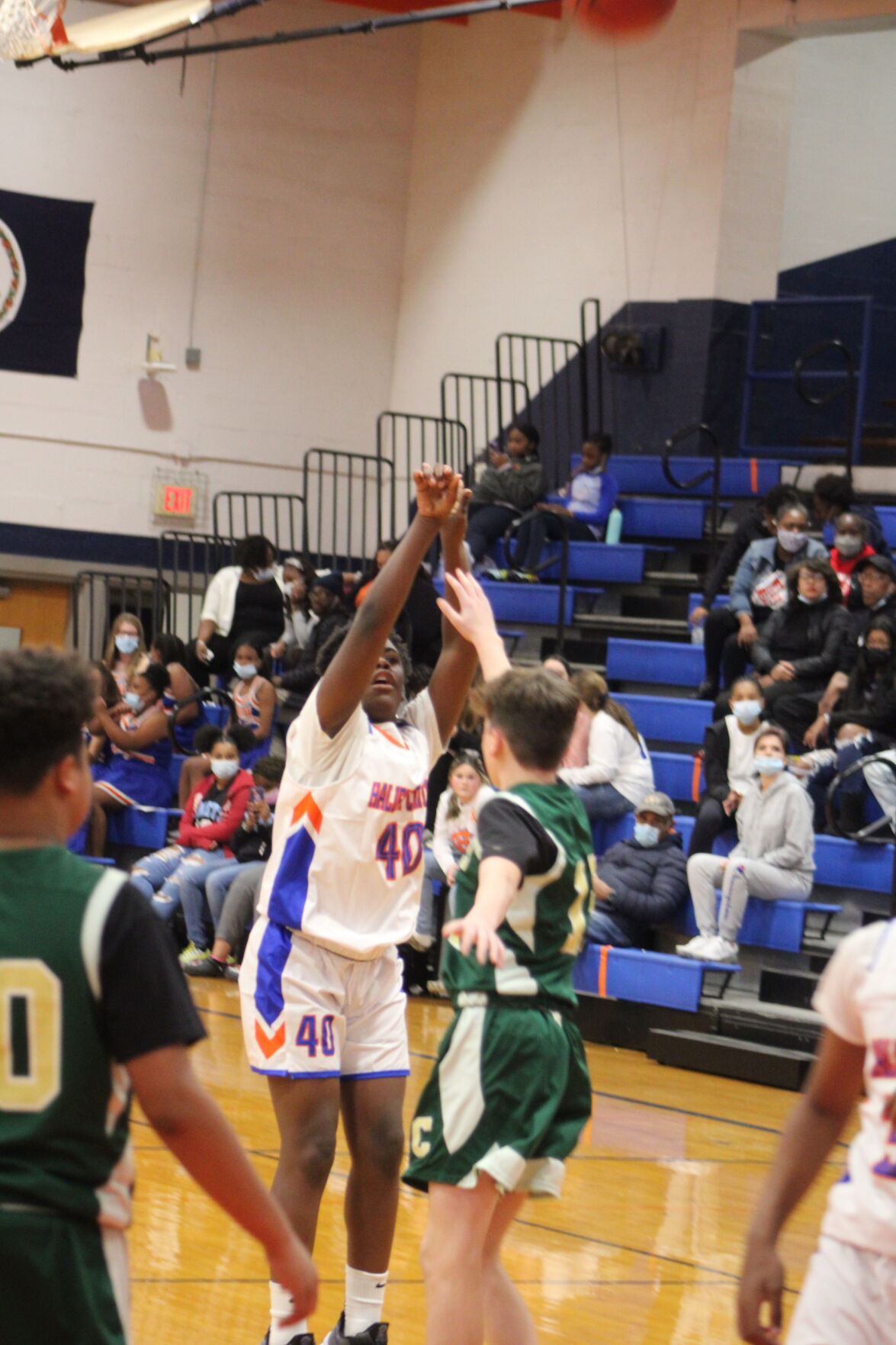 Halifax County Middle School Lion Amarion Harris (40) shoots the 3-pointer over a Patrick County defender as the ball swishes in the net in the Lions’ 49-15 win over Patrick County on Monday. 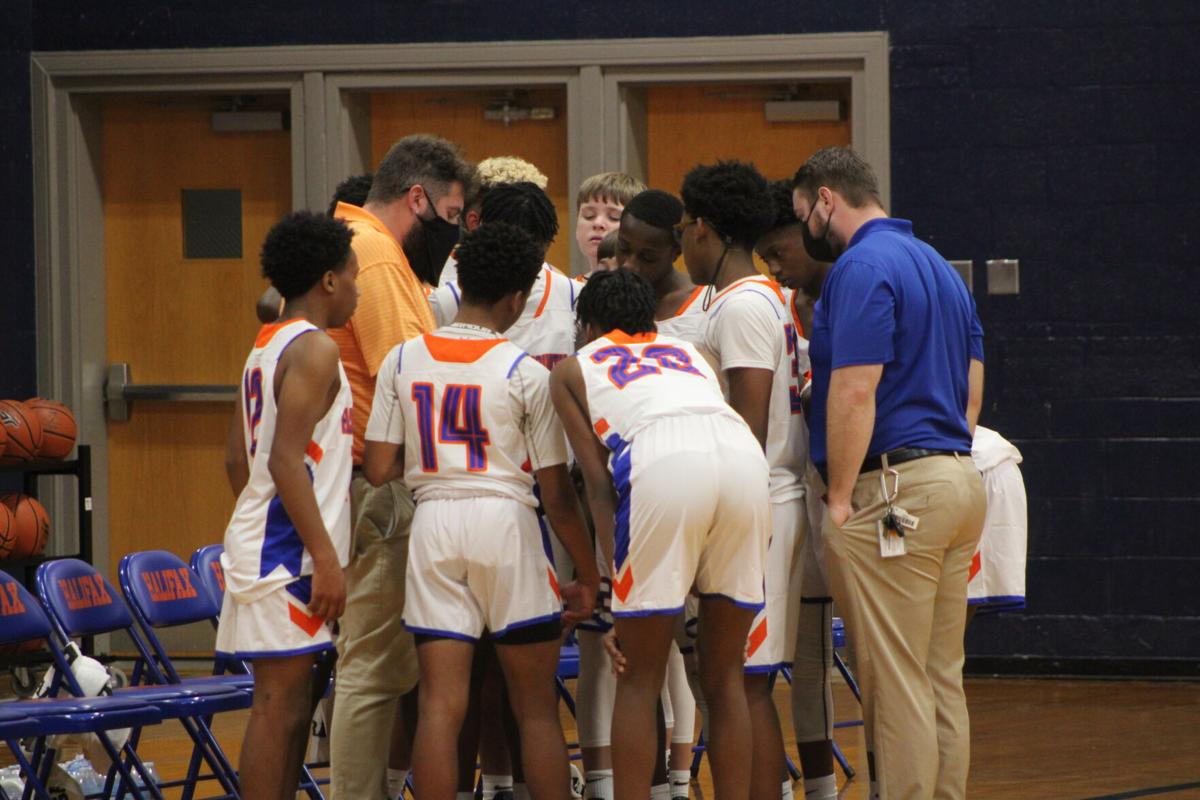 The Halifax County Middle School Lions head coach Nelson Baskervill talks to his team during a timeout about increasing their defensive presence early on in their game versus Patrick County on Monday as they won in impressive fashion with a final score of 49-15.

The Lions’ boys basketball team was able to extend their season to a 6-0 start after their dominating 49-15 win over Patrick County on Monday.

The key to the win was their stifling defensive efforts as Patrick County struggled to even get the ball in bounds with Darius Hamlett tipping just about every in-bounds pass by the Cougars forcing countless turnovers in the half court.

Jhamari Jones-Hutcherson and Montavious Marrero led the Lions on offense with 12 points apiece, and Hamlett added an additional 10 points.

Although the Lions hadn’t competed in a game since Dec. 16, they still came out strong on defense and offense.

The Lions jumped out to an early 18-8 lead after the first quarter thanks to seven points from Hamlett and four points apiece from Hutcherson and Marrero.

Although the Lions jumped out to an early 10-point lead after the first quarter head coach Nelson Baskervill said it was obvious that the team hadn’t competed in a game in several weeks early on.

“We looked rusty in the beginning, and we looked like we hadn’t played in several weeks, however, we fixed that going into the end of the first quarter,” said Baskervill.

After a strong defensive performance in the first quarter and a slow start to the game for them offensively, they came out in the second quarter firing on all cylinders scoring 21 points in the second alone.

However, defense was the key to success in the second as their defense created more opportunities for them on the offensive side of the ball stealing pass after pass and only allowing the Cougars to score two points in the second.

Going into halftime with the score at 39-10, it was clear the Lions had already put the game away.

In the second half, the Lions slowed down on offense, but still the Cougars couldn’t get anything to fall on offense as they went scoreless in the third quarter due to the Lions’ defensive pressure.

The Lions scored seven points in the third to extend their already commanding lead to 46-10.

Going into the final quarter of play already up 46-10, coach Baskervill decided to give all of the boys their opportunities on the court.

The Lions could only muster together three points in the final quarter of play, however that didn’t affect the outcome of the game as the defense still didn’t allow easy baskets only giving up five points bringing the final score to 49-15.

“I would say our defense is what we did best tonight. The defense played fast, and the press was working as we were able to force a good amount of turnovers in our press,” said Baskervill.

Baskervill then went on to express how proud he is of the boys.

“I am always happy to see a win like this especially after long break. It’s easy to relax, and I am proud of the boys. They played with fire and passion all night,” Baskervill concluded.

The Lions will get back on the road today (Wednesday) looking to continue their dominant win streak with a game against Westwood Middle School after the conclusion of the lady Lions’ game at 5 p.m.