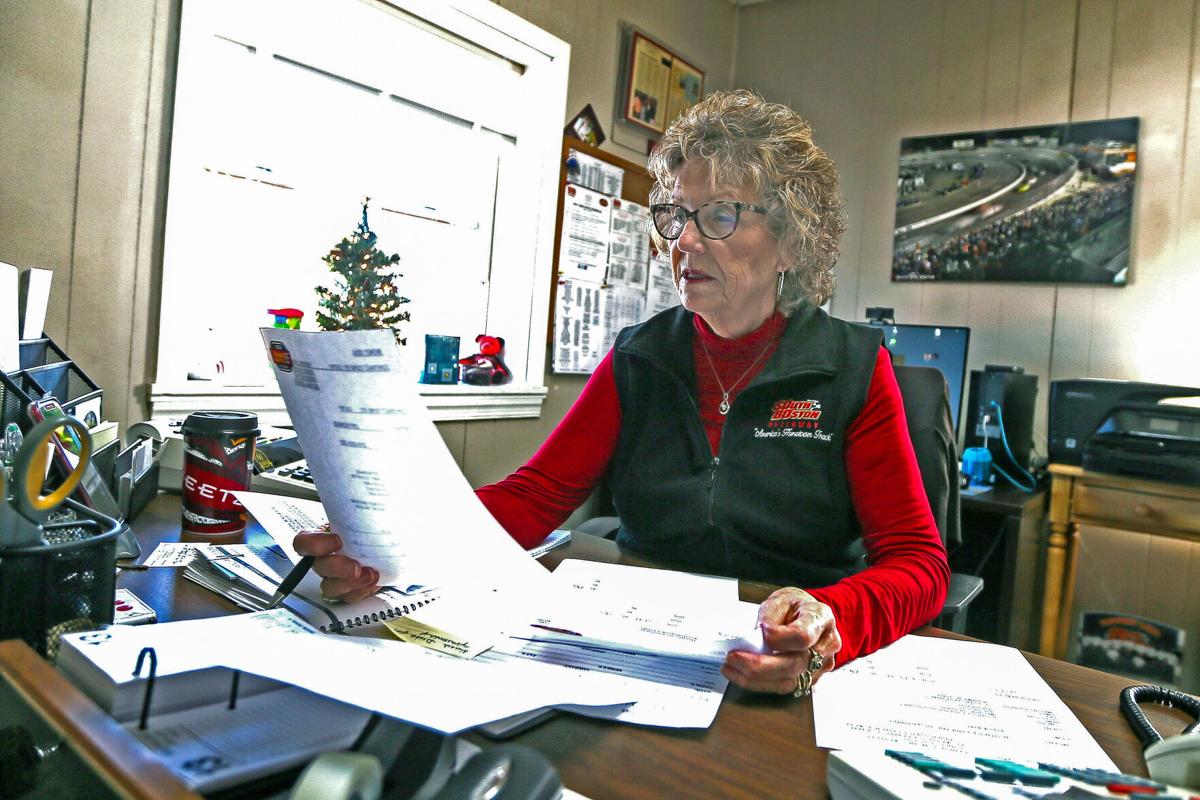 South Boston Speedway General Manager Cathy Rice tackles the office paperwork during one of her typical days at speedway office. Rice will be stepping down from the speedway’s general manager post at the end of the 2021 season. 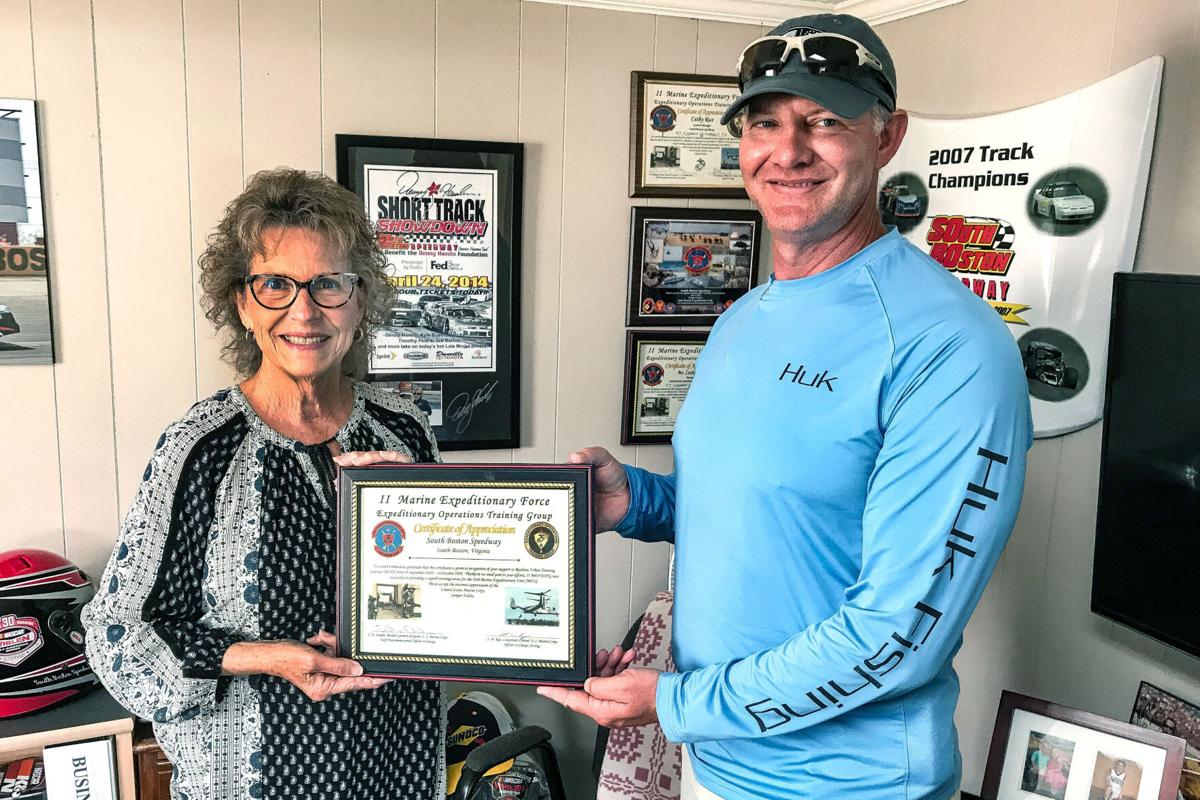 While serving in that post for the past 20 years the Cluster Springs resident has helped make South Boston Speedway one of the true gems among NASCAR Advance Auto Parts Weekly Series short tracks.

The 2021 season will be Rice’s last full season as general manager of South Boston Speedway, as she plans to step down from a full-time role at the historic speedway.

“I am not walking away, I am just slowing down,” Rice explained.

“I don’t want anybody to think I’m leaving because I’m not,” she continued.

“My health is good. I feel I can still come here and help whenever needed. I’m going to stay on as far as maybe consulting or something along that line. I will always be here for whomever comes in and steps into my position.”

"Cathy Rice has been the lifeblood of this historic racing venue during her tenure and will continue to be involved with the speedway in some capacity well past 2021,” Igdalsky said.

“No one has fought, advocated, promoted or has been more passionate about South Boston Speedway over the past 30-plus years than Cathy Rice. She has put so much care, effort and passion into her work at SoBo that we often joke that the track is her third child!

“Her daily presence will be missed by all who frequent the speedway, but her legacy will be passed on as Cathy will personally train her replacement this entire season,” Igdalsky continued.

Rice said she has had a plan in place for the time when she felt the need to slow down and step back.

“I had always told Nick that as long as my health would permit me to do so I would give him a year’s notice because I would love to bring someone in here and let them see what it is like during the winter months, how we start our season, how we go through our season during the summer months and how we end our season,” Rice explained.

“Whomever steps into my position needs to experience what all of that is like, and they need time to get to know people in the community.”

Rice has spent 33 years on the operational side of things at South Boston Speedway, serving in a variety of capacities ranging from secretary to scorer, to promotor, and her present post of general manager.

When Rice was named as the track’s general manager in 2000, becoming only the second woman to serve as general manager of a NASCAR-sanctioned speedway could have led to mixed feelings and a lot of pressure. It wasn’t that way for her.

“People have asked me how I feel being a woman in the position I am in,” Rice remarked.

“Being a female in a male-dominated sport didn’t make me feel any different. I didn’t feel any pressure. I feel the competitors respected me as well as I respected them. Today, the situation is different. There are a lot more women involved in the sport, and they are involved in many different ways.”

Rice says she is very grateful to have the opportunity to work for the Mattioli Family and grow South Boston Speedway.

“You will never find anybody to work for as good as the Mattioli Family and Nick and his family,” Rice remarked.

“That is one thing that makes this really hard. When you come to work here you are like a family. We are family oriented. We have fun at what we do, and we get the job done.”

One of the things Rice credits for her success and the success of the speedway is a dedicated, hard-working and talented staff.

“There is no way I could do this by myself,” Rice said, “and I thank everybody on the speedway staff over the past and present years for their hard work and dedication to the speedway.

Rice very much appreciates the support the South Boston-Halifax County community has shown to her and to South Boston Speedway over the years.

“I thank my family and friends for their support through all of these years,” Rice said.

“In addition,” Rice continued, “I also thank our track service providers including Franklin’s Wrecker Service and Donnie Ellington, our officials, our past and present sponsors, all of our competitors, and especially the people of South Boston and Halifax County and our many loyal race fans for their support.”

Rice has received numerous honors during her tenure as general manager at South Boston Speedway. She has been honored by NASCAR for her outstanding work, twice being named the recipient of the NASCAR Team Player Award. In addition, Rice serves on the National Association of Stock Car Auto Racing (NASCAR) Appeal Board. Rice will continue to serve on the board. She also received the Old Timers Racing Club’s Promotor of the Year Award in 2013.

Rice has enjoyed a longtime involvement in racing that dates back to 1972 when she married Allen Rice, who was a mechanic and crew chief for his brother’s racing team. Her first working experience in motorsports was as a co-owner and crew member of a Late Model Sportsman Division car with duties that included timing and scoring.

In the 1980s she worked with former NASCAR stars Jeff Burton, Elliott Sadler and Hermie Sadler. Rice traveled with Jeff Burton in 1989 on what was then known as the NASCAR Busch Grand National Series (the series now known as the NASCAR Xfinity Series) circuit. During that time, she handled timing and scoring for Burton.

Rice has been a member of the South Boston, Rotary Club for 17 years. She has served as secretary of the civic organization and is a recipient of the Rotary Club’s Paul Harris Fellow Award.

An active member of Second Baptist Church in South Boston, Rice has served on various church committees and as a member of the church’s board.