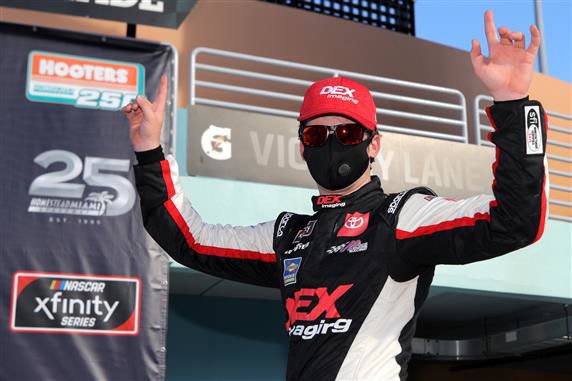 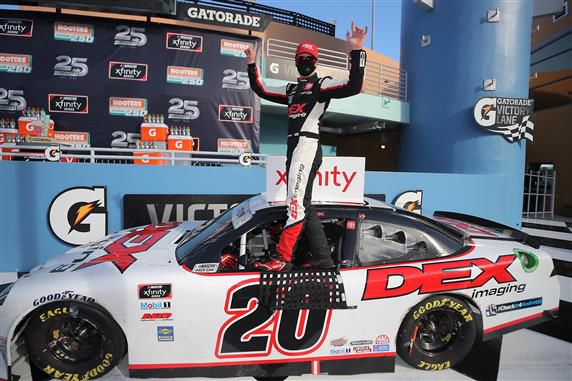 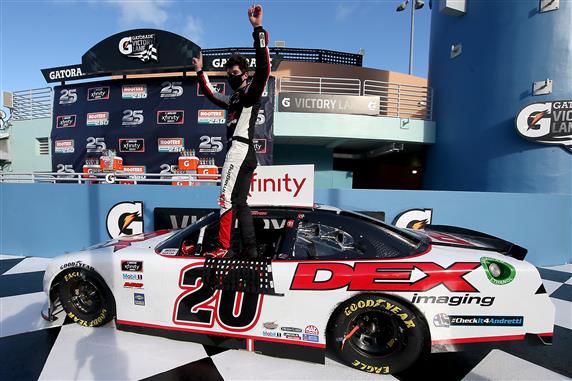 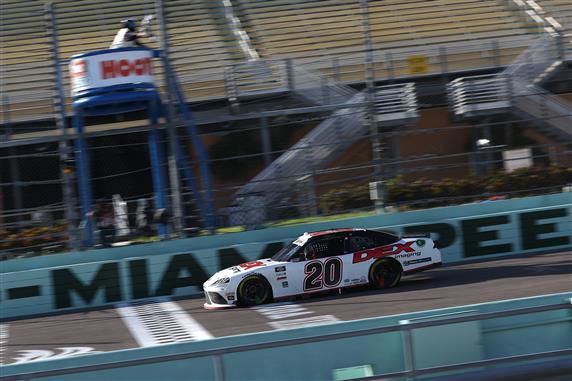 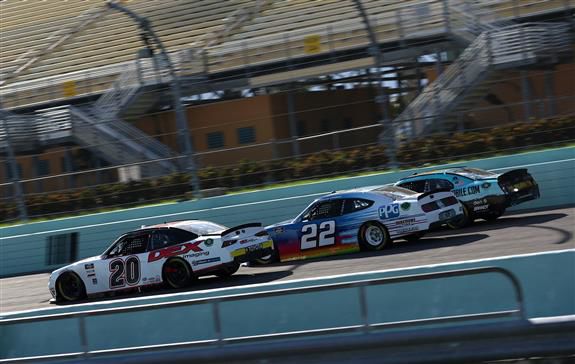 Harrison Burton prevailed in a three-wide, frantic push to the checkered flag to win Saturday’s Hooters 250 on a restart with only two laps remaining in the first event of a NASCAR Xfinity Series doubleheader weekend at Homestead-Miami Speedway.

The 19-year-old series rookie Burton edged Austin Cindric and Noah Gragson by .379-seconds — leading only the final two laps on the day — to earn his second career victory of the season and become the track’s youngest series race winner.

“I’m so excited, that’s so awesome,” said Burton, who drives the No. 20 Joe Gibbs Racing Toyota. “I gave away the lead in the first restart in the same position and I didn’t really want to do that again. I knew the nine (Gragson) was going to drive in real deep and slide up so I felt good about that.

“I’m proud of my guys, we worked on this thing so hard every day, every run I should say and made it better and better. What a day to get this Dex Imaging Toyota Supra in Victory Lane. They can keep on doubting us and we’re going to keep on coming back.”

“What a race, man. This track is so much fun and really puts it in the drivers hand, especially at the end there. I’m just ready to go again tomorrow, to be honest with you. I’m ready to get two.”

Harrison Burton is the son of Halifax County native and NASCAR Hall of Fame finalist Jeff Burton. His uncle, Ward Burton, who is retired from the NASCAR Cup Series and is a former Daytona 500 winner still resides in Halifax County along with his cousin, Jeb Burton, who is running a limited schedule this year in the Xfinity Series and Gander RV & Outdoors Truck Series.

Harrison Burton grew up in the Charlotte, North Carolina, area but his grandparents and other family members still reside in Halifax County. Burton also was able to follow in the family footsteps by adding his name to the list of Burton’s to capture a win at South Boston Speedway when the K&N Pro Series East came to South Boston in May 2017. Burton won the whosyourdriver.org Twin 100 in front of his family and friends in his father’s hometown.

It was an especially rough outcome for Gragson, who led the most laps on the day — 83 of 167 — and held a five-second lead on the field before the caution came out with only five laps remaining.

“It was tough,” Gragson said. “The No. 9 guys at JR Motorsports had really great pit stops all day. Restarts were just the biggest struggle. I was really proud of my restarts here last year here, but just couldn’t get them going [today].

“I thought we were going to be able to come home with the win today running the top. That was so much fun.”

It was certainly an exciting race in the hot Florida afternoon sun with 23 lead changes - often multiple cars involved in a single lap. Gragson, Cindric, Florida native Ross Chastain and fan favorite Earnhardt – who hadn’t raced in the Xfinity Series at Homestead since 2008 - led laps at various times in a thrilling highly-competitive day.

Briscoe, who led the championship standings coming into the race, had a mechanical problem before the green flag and sat in the pits for the opening six laps. Disappointing, for sure, but it made for a dramatic and impressive comeback for the Stewart-Haas Racing driver who made up all but one lap by the start of Stage 2.

He stayed out as long as possible during the final stage, running with 20-lap older tires than the race leaders. He was sixth with 20 laps remaining hoping for a caution flag that would have let them pit and stay on the lead lap. But he was ultimately forced to come in for fresh rubber with 17 laps remaining and still raced to a top 10.

He finished sixth and dropped to 18-points behind new leader Gragson in the championship standings.

Ryan Sieg earned his second career stage win, taking the opening stage victory by pitting four fresh tires on a caution period and sprinting by the race leaders who did not pit at that point. Gragson won the second stage.

The series will race again Sunday at noon in the Contender Boats 250 (12 p.m. ET on FS1, MRN and SiriusXM NASCAR) in a Dash 4 Cash incentivized race with $100,000 up for grabs among last week’s Atlanta winner A.J. Allmendinger, Gragson, Justin Haley and Daniel Hemric. The top four drivers from Sunday’s race will be eligible for $100,000 bonus on June 20 at Talladega (Alabama) Superspeedway.