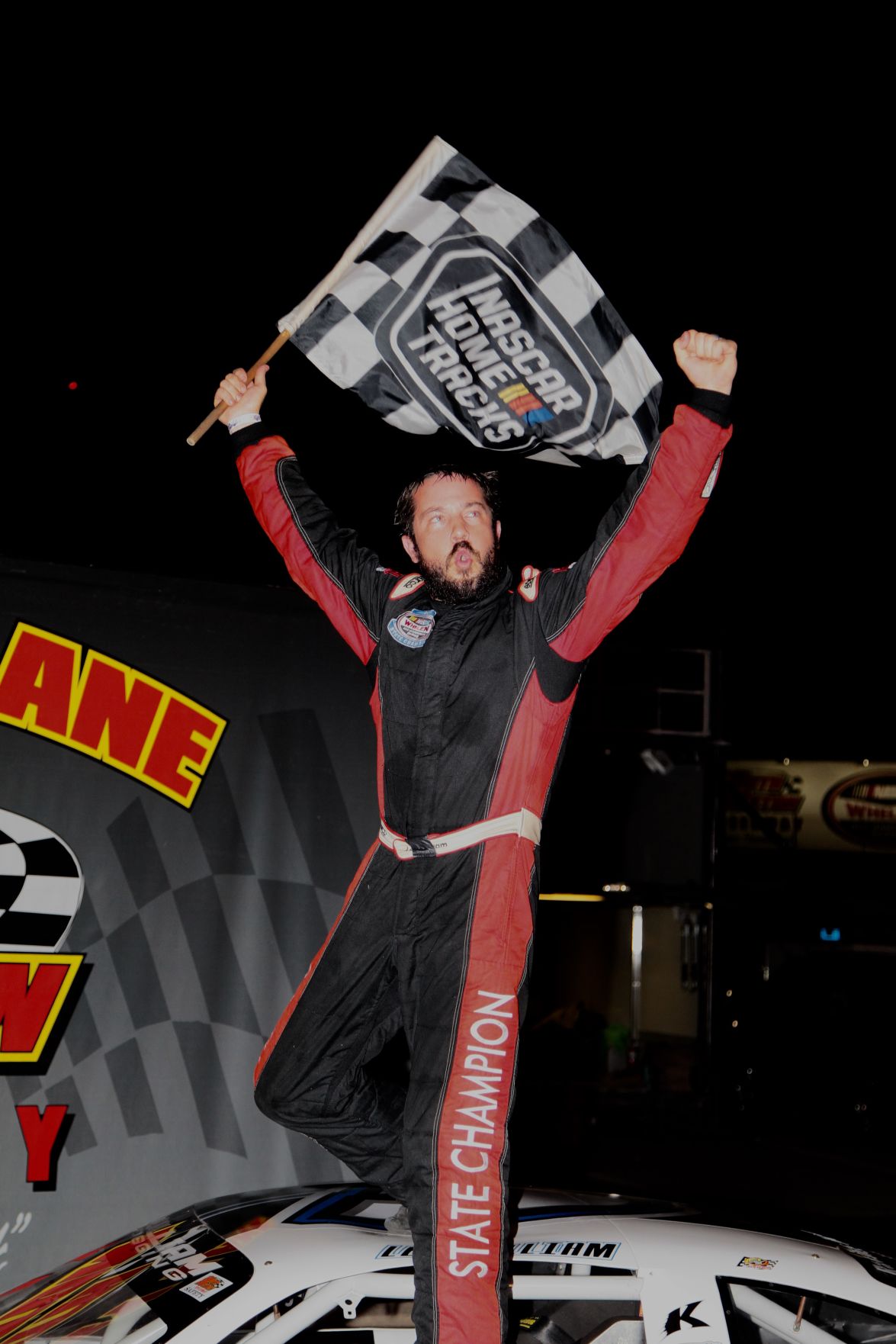 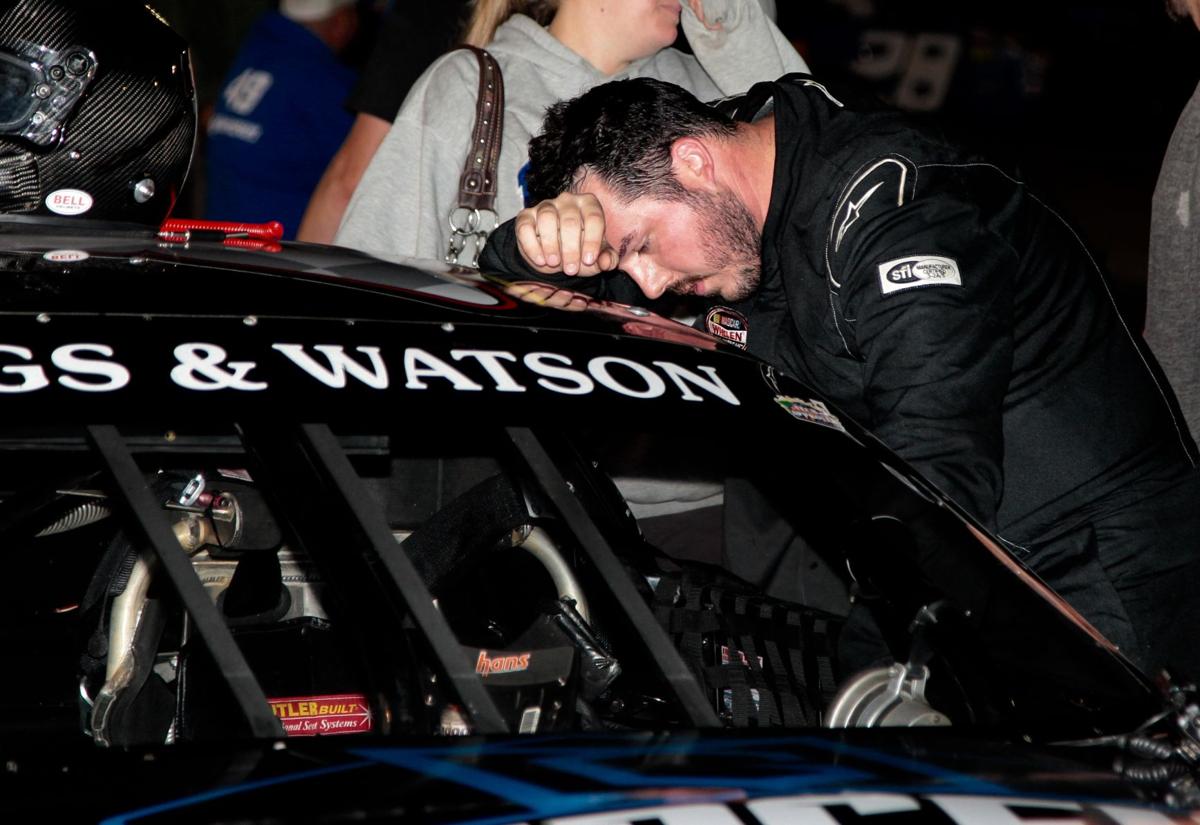 Thomas Scott shows the disappointment and frustration of losing the lead and the possible win on the final lap following Saturday night’s NASCAR Late Model 100 at South Boston Speedway. 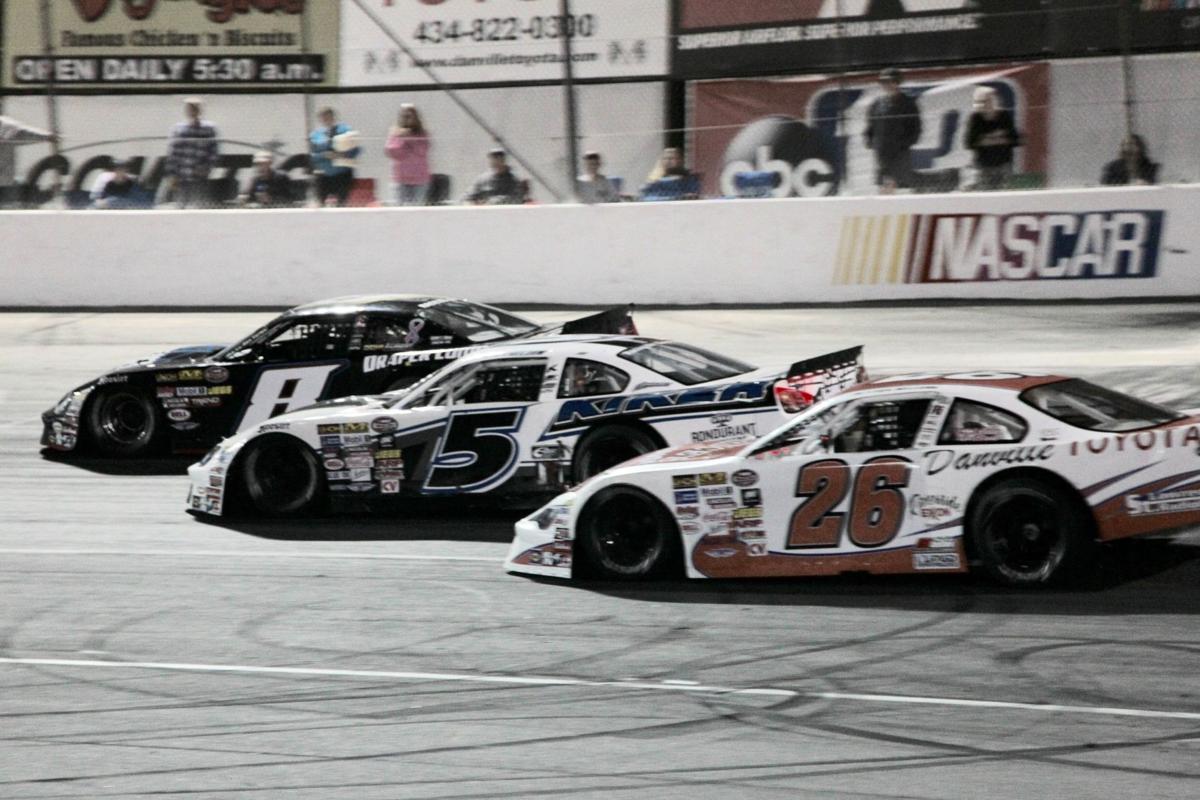 Thomas Scott shows the disappointment and frustration of losing the lead and the possible win on the final lap following Saturday night’s NASCAR Late Model 100 at South Boston Speedway.

Daniel Moss of Danville and Danny Willis Jr. of South Boston split wins in the pair of 25-la…

Lee Pulliam scored his fourth straight victory in Saturday night’s NASCAR Late Model 100 at South Boston Speedway, but it took some late-race dramatics for the Alton resident to pick up his sixth win of the season at the .4-mile oval.

The former NASCAR Whelen All American Series national champion survived an intense four-lap dash to the finish following the last of the race’s six caution periods, squeezing past Thomas Scott of Efland, North Carolina, on the final lap and edging defending track champion Peyton Sellers of Danville by a car length and Scott by two car lengths in the 100-lap race.

“That was a big one,” the four-time former NASCAR national champion remarked.

“It was a hard-fought one, the hardest win I’ve had this season. We raced hard, rubbed and all of that, but everybody raced with respect. It was just good, hard short-track racing.”

While Pulliam was thrilled with the win, he was apologetic that he had to take the win away from Scott who ran his best race of the season.

“Thomas Scott is a heck of a good guy,” Pulliam said.

“I hate to take a win away from him, because I know how hard he and his family work to get to the racetrack. I know it was a tough race for him to lose, but it was going to be a tough one for me to lose as good as this car was and dominating all race long.”

Scott, who led 11 of the race’s final 15 laps, was obviously disappointed at seeing the win slip from his grasp on the final lap and having to settle for third place.

“We had a good car, and I did a good job just riding and saving everything I could,” Scott remarked.

“I thought we had something there at the end. Once I got out into clean air, it (the car) was good.

We restarted that last restart, and I just got up on the wheel and drove it, and it just wasn’t enough.”

Pulliam held almost a quarter of a lap lead over pole winner Trey Crews of Halifax only to see it evaporate with 15 laps to go when Austin Thaxton of South Boston spun after contact between his car and Sellers’ car as they battled for third place.

On the ensuing restart, Pulliam spun after contact between he and Crews as the pair battled for the lead to bring out another quick caution period. The incident put Scott into the lead with Daniel Silvestri of Great Falls in second place and Thaxton in third place for the restart. Pulliam restarted the race from the fifth spot, while Crews was forced to restart near the rear of the field after being penalized by NASCAR track officials.

Pulliam quickly darted to the front of the field, moving up to second place behind Scott, with Sellers in third place, and got himself into position to make a bid for the lead. Two more caution periods, one on lap 95 and one on lap 97, set up the final sprint to the finish.

Scott held the lead on the final restart, only to be shuffled back to third place on the final lap as Pulliam muscled his way into the lead, and Sellers followed to capture the runner-up spot.

For Sellers, the runner-up finish put a positive end on what had been a tough night that included him having to pit twice under caution for chassis adjustments and the incident with Thaxton.

“We just missed it tonight. I made the call to free the car up, and it was the wrong way to go. We should have snugged it up.”

Sellers said he was upset about the incident with Thaxton.

I made a bone-headed move getting under Austin Thaxton there,” he said.

“That was my fault. I turned him around.”

Thaxton finished fourth in the race behind Pulliam, Sellers and Scott, with Silvestri rounding out the top five finishers. Crews finished sixth.

The race featured five lead changes among three drivers with Pulliam leading three times for a race-high 61 laps. Scott led twice for 11 laps, and Crews led the first 28 laps, before Pulliam took the lead for the first time.

IMSA WeatherTech SportsCar Championship series standout Jeroen Bleekemulen of The Netherlands had a new experience Saturday night competing in his first-ever oval track race and his first NASCAR race in the 100-lap race.

Bleekemulen, who was set to compete in Sunday’s Michelin GT Challenge for Mercedes-AMG Team Riley Motorsports in the Michelin GT Challenge at nearby VIRginia International Raceway, finished 15th after being sidelined after 22 laps. He had posted the 10th-fastest time among 16 drivers in qualifying for the race. The veteran road-racing star started sixth on the grid after some drivers that qualified ahead of him elected to drop to the back of the field for the start of the race.

The 100-lap race was punctuated by six caution periods.