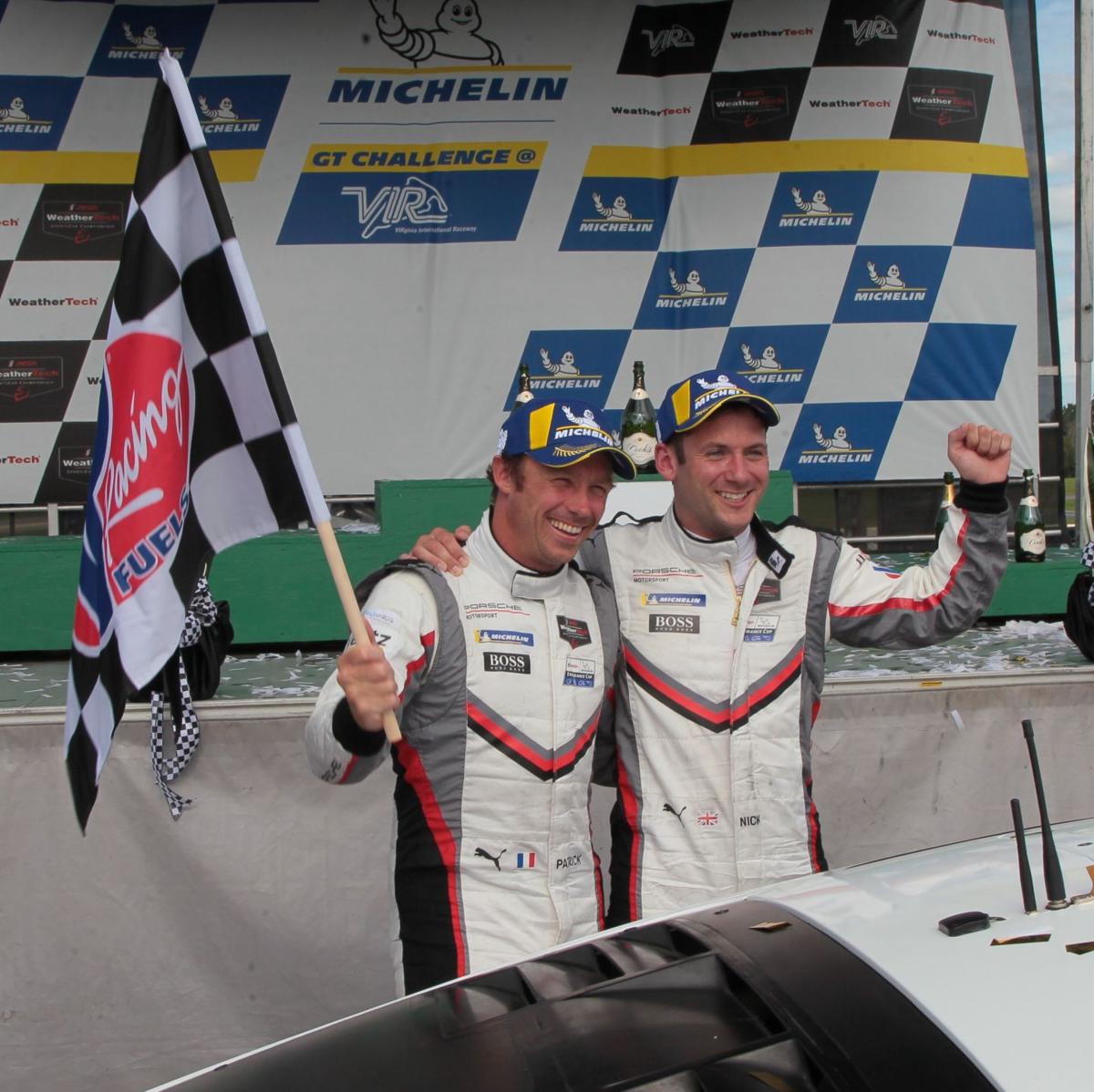 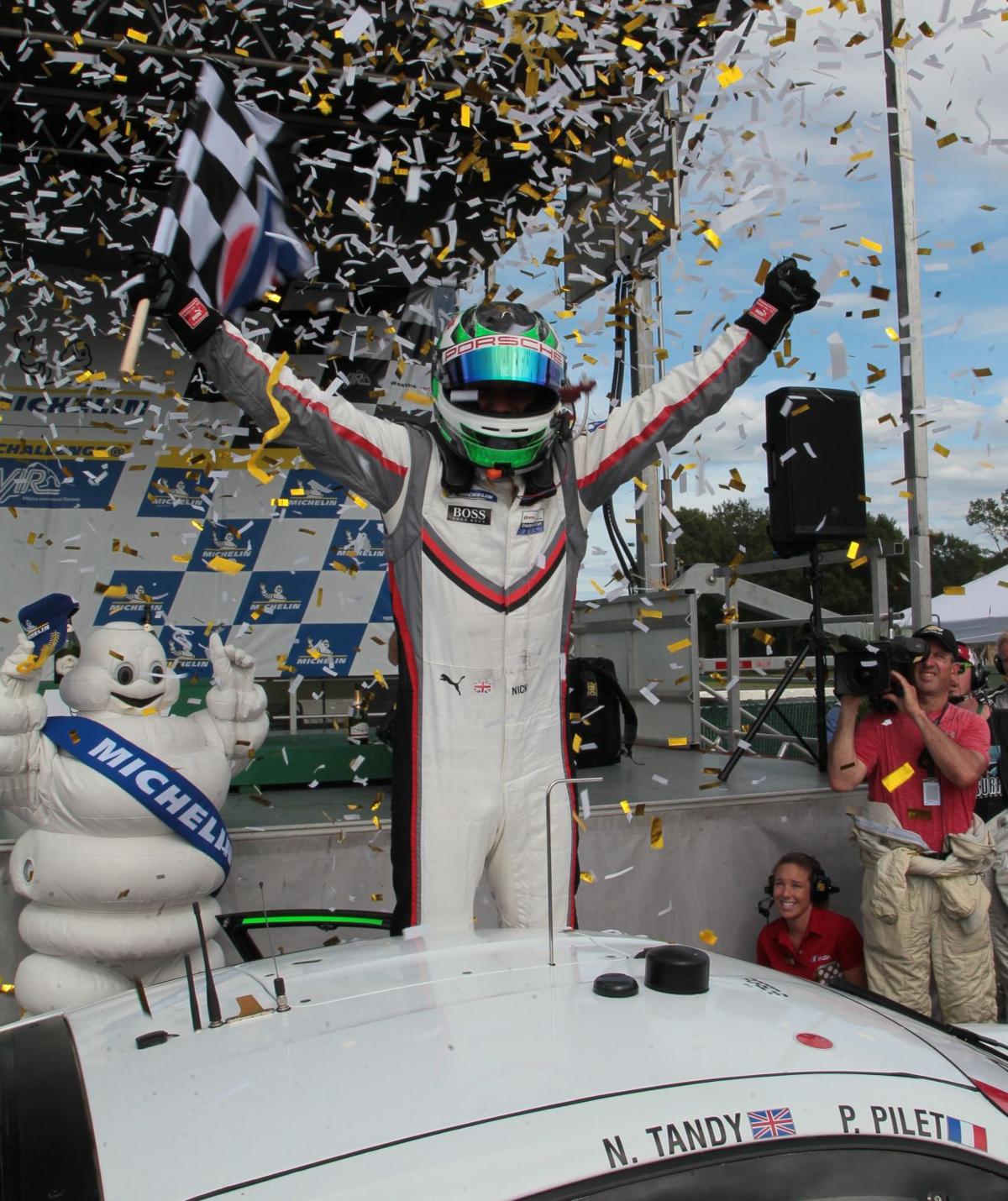 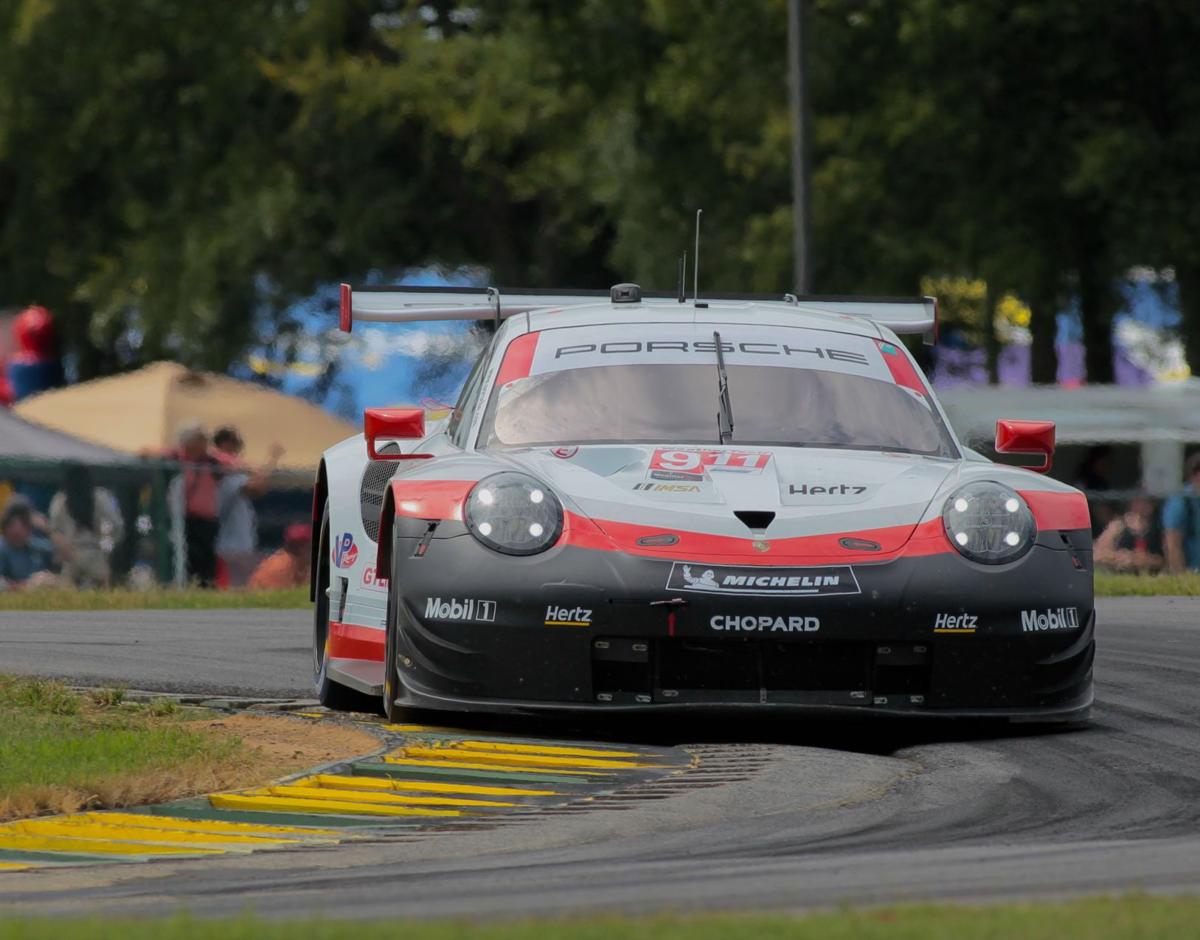 Patrick Pilet in the No. 911 Porsche hits the rumble strip as he speeds out of a corner during the first half of Sunday's Michelin GT Challenge IMSA WeatherTech SportsCar Championship race at VIrginia International Raceway at Alton.

Patrick Pilet in the No. 911 Porsche hits the rumble strip as he speeds out of a corner during the first half of Sunday's Michelin GT Challenge IMSA WeatherTech SportsCar Championship race at VIrginia International Raceway at Alton.

Tandy, driving the second stint of the race for the No. 911 Porsche factory team, led the last 20 laps of the two-hour-and-40-minute race over the 3.27-mile VIR layout, taking the lead from Ford factory driver Richard Westbrook when Westbrook pitted the No. 67 Ford Chip Ganassi Racing Ford GT for its final pit stop of the race.

From that point, the race boiled down to a battle between Tandy and fellow Porsche factory driver Earl Bamber who piloted the No. 912 Porsche with Laurens Vanthoor, with Tandy edging Bamber by .737-second at the finish.

The race-winning Porsche 911 RSR co-driven by Pilet and Tandy led a race-high 48 laps. Sunday's win was the sixth victory of the season for the Porsche GT factory team and was the second win for Tandy and Pilet at VIR, who scored a VIR win in 2015.

Most importantly, though, was that the 1-2 sweep by the Porsche factory team all but sealed the 2019 WeatherTech Championship GTLM manufacturers championship for Porsche. Porsche needs to earn minimal points for starting the season's last two races in order to win the title.

"The manufacturers championship was the first step," Pilet said, "so this is done now. We can fight until the end with our sister car, which made a great job today. It was a great fight with them."

While the two Porsche factory teams have three wins each this season, Bamber and Vanthoor lead Tandy and Pilet by 11 points in the driver and team standings.

"We will try to make their life a bit more difficult for the driver's championship," Pilet remarked.

"Even if it's not easy, we will never give up until the end."

A full-course caution with 21 minutes remaining in the race resulting from a crash by Katherine Legge set the stage for a closing battle between Tandy and Bamber. While concerned about rubber build-up on his tires on the restart with nine minutes in the race, Tandy was able to fend off Bamber for the win.

"At the time, we were just cruising home for the last 20 minutes or so. The race was pretty much neutralized after the last (pit) stops. The trouble we had was we had the late caution on hot tires. Fortunately, we had just enough grip and pace to hang on for the first couple of laps while I figured out the grip while the tires heated themselves up again."