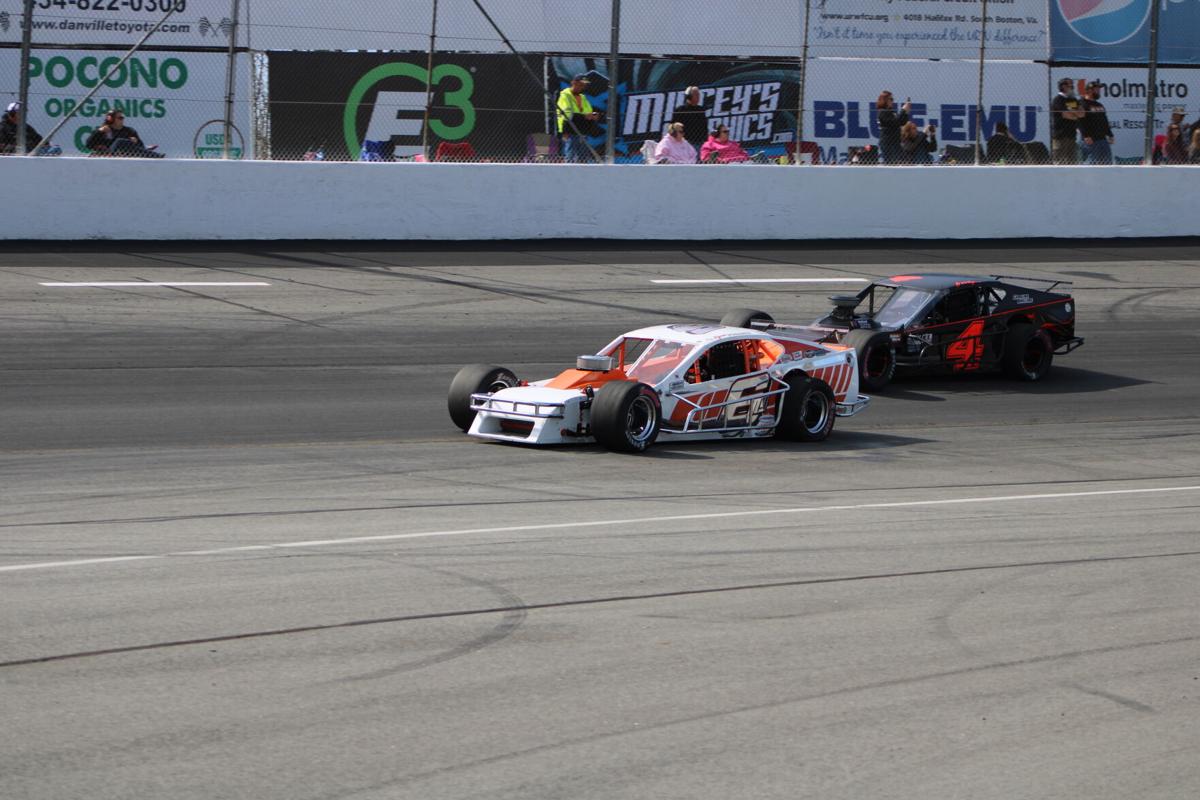 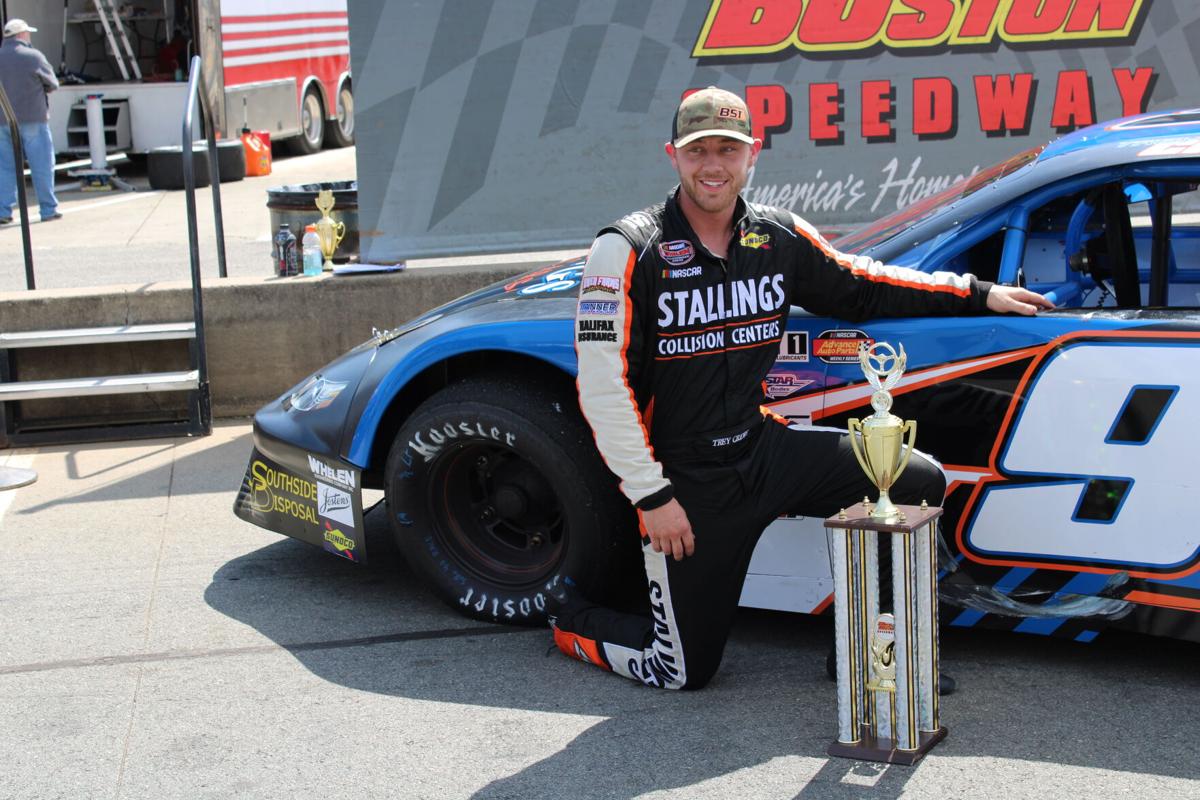 Trey Crews is all smiles in Victory Lane after winning the Late Model Stock Car division race on Saturday at South Boston Speedway. 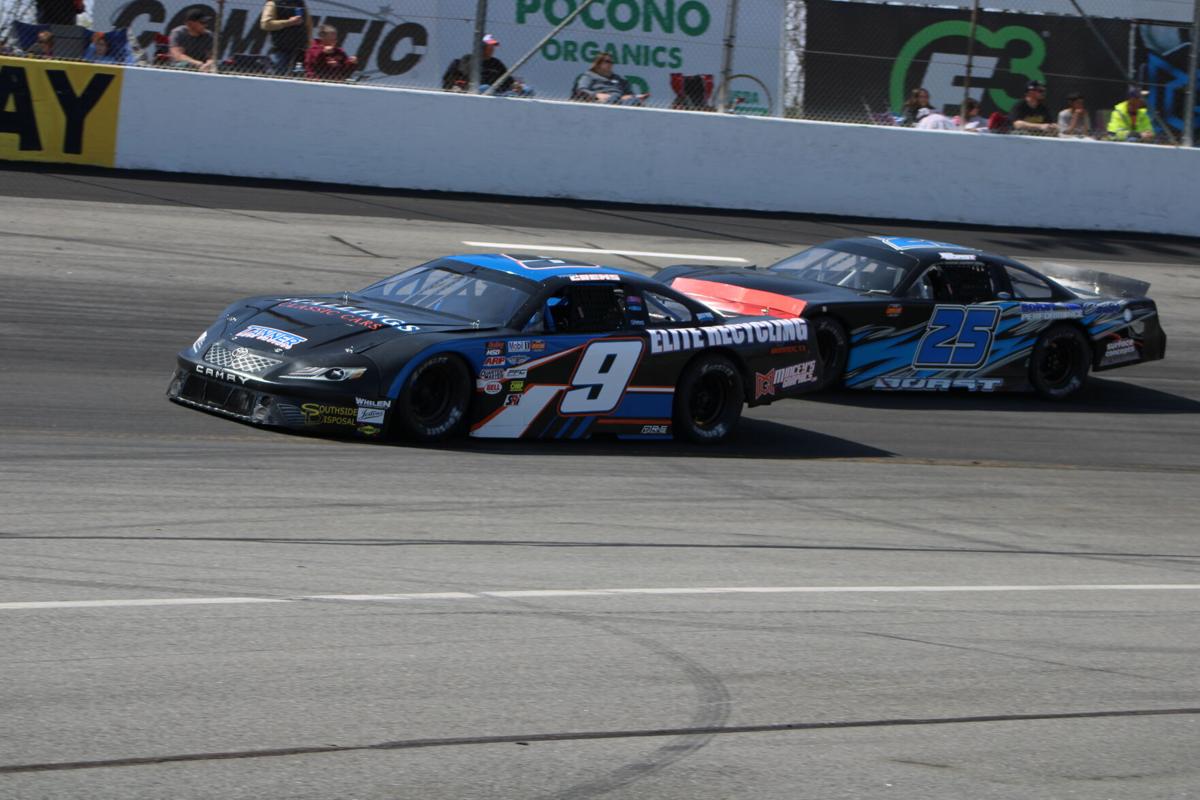 Trey Crews (9) pushes toward the finish of the 100-lap Late Model Stock Car race with Jacob Borst (25) in hot pursuit of the leader at South Boston Speedway on Saturday. 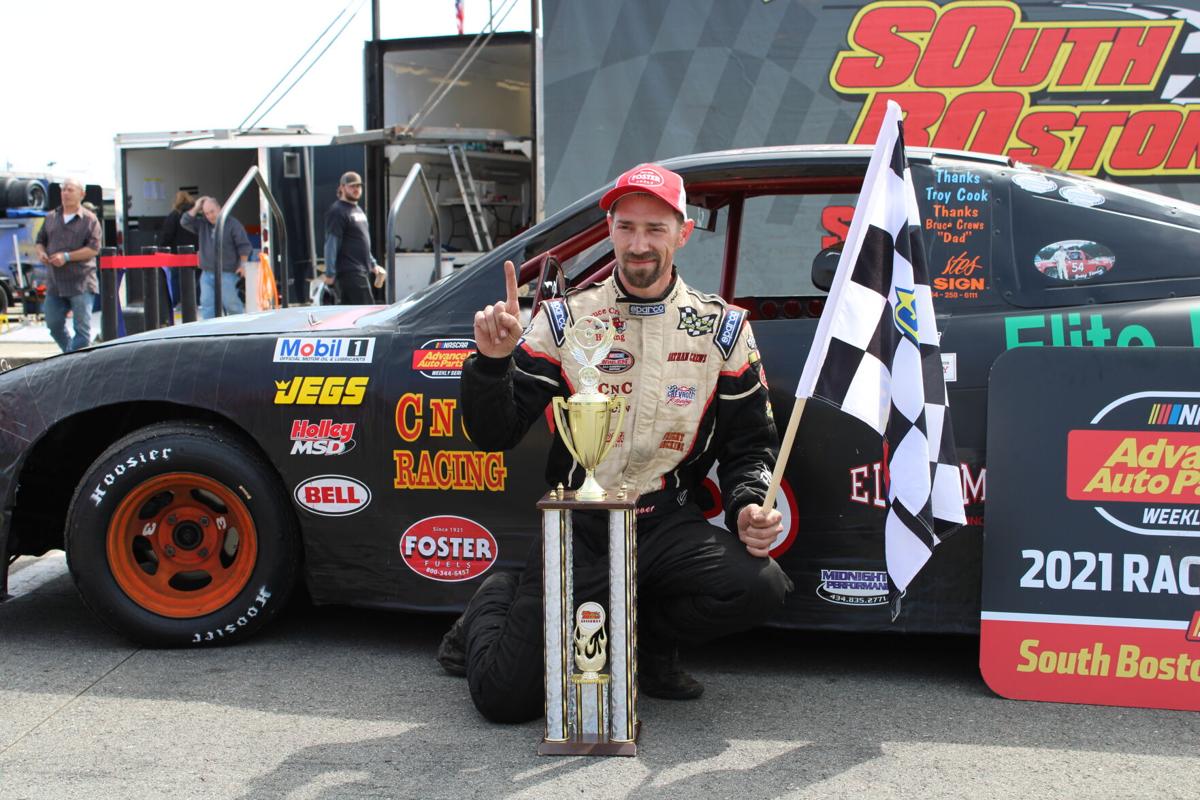 Nathan Crews has the checkered flag and trophy in hand after winning the Pure Stock Division race at South Boston Speedway on Saturday. 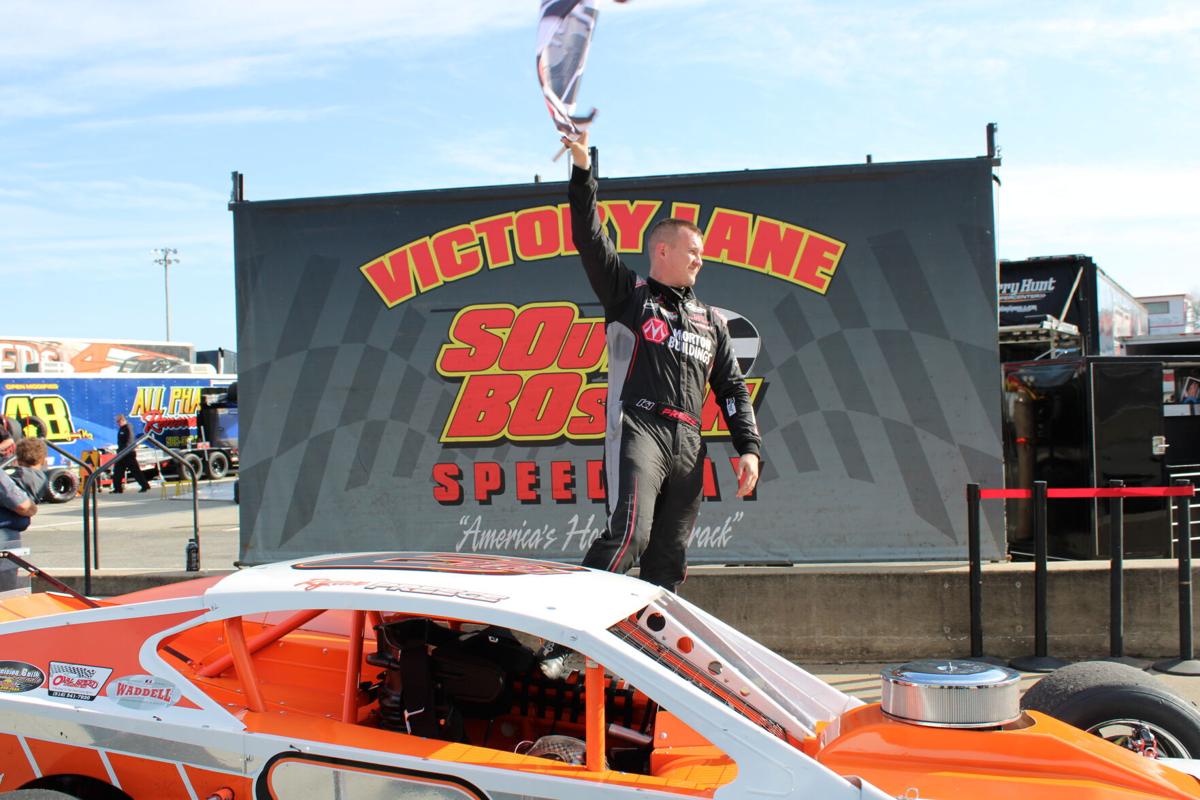 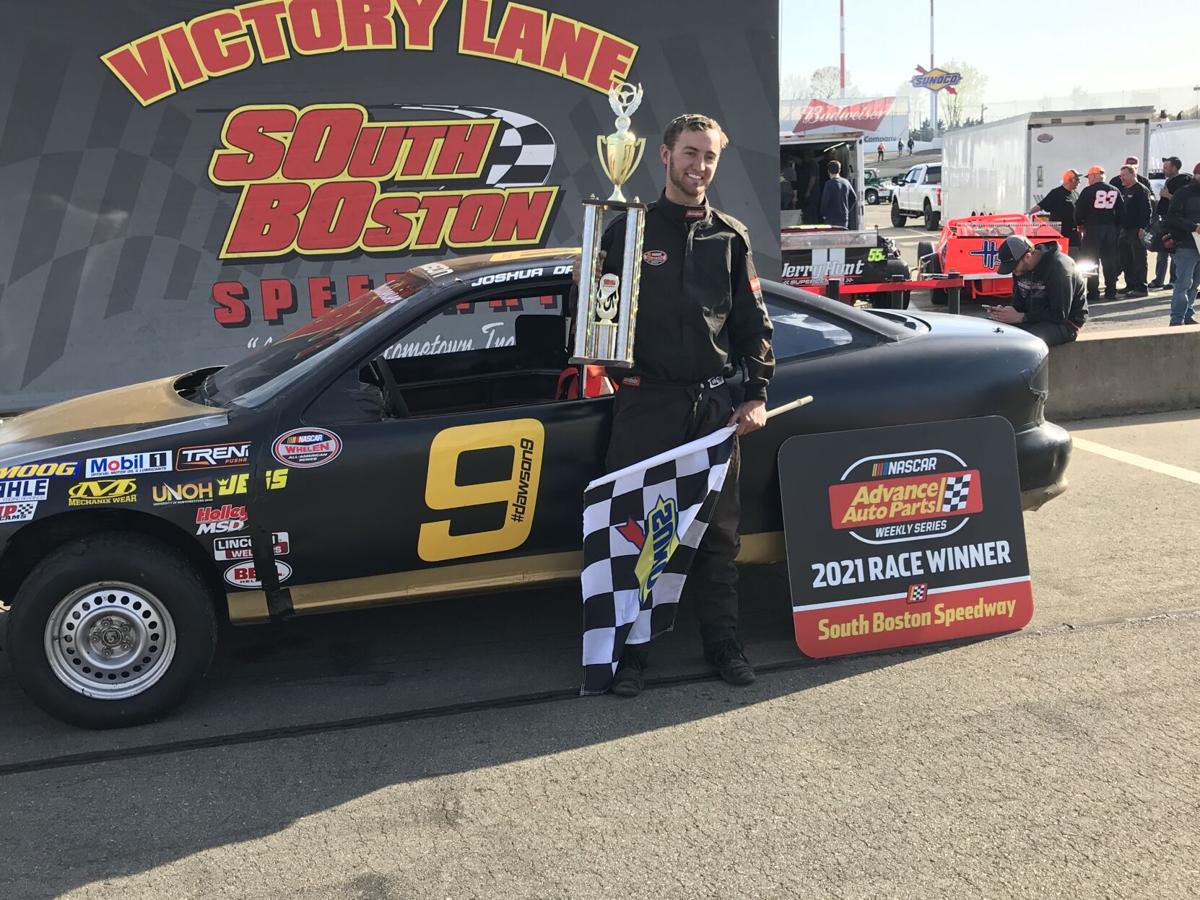 Josh Dawson is all smiles as he celebrates his win in the Hornets Division at Sout Boston Speedway on Saturday.

Ryan Preece held off pole-sitter Chuck Hossfield and Burt Myers to take home a win in Saturday’s 99-lap SMART Modified Tour race at South Boston Speedway, a race including a field of 23 cars and was marred by nine cautions, including one red flag stoppage.

The margin of victory was .473 seconds for the New Berlin, Connecticut driver.

Preece now has won three time at South Boston, including the Denny Hamlin Showdown and a Southern Modified Tour race.

He said after the race that the number of cautions, including the final one with seven laps remaining, did not frustrate him or affect his racecar.

“I enjoy restarts,” said Preece, who chose the outside line on the final series of restarts.

“The place was rubbered up, and it was best to be up top.

“We just had a good car and a good group of guys,” Preece said with a nod toward his race team.

Hossfeld said his racecar was fast during the race but noted a couple of issues that prevented the car from getting any faster in his second Modified race of the season.

“I think we had a great run. We had a practice day yesterday and made the car better,” said Hossfeld.

“Our car was fast, and the chassis was just phenomenal.

“Take those two equations out, and we had a winning car each time. but I’m proud of what we did accomplish.

“If we didn’t have the left front issue, we would have been faster. On the restart I tried to go inside. I did the best I could but just came up short.”

Modified race veteran Tim Brown was injured during an incident in Saturday’s SMART Modified Tour event, according to a press release from South Boston Speedway.

Brown was injured and was extricated from his vehicle. He was alert at the time and is now being treated at a local hospital. He remains in good condition and all injuries are non-life-threatening, according to the press release.

South Boston resident Trey Crews won the 100-lap Late Model race on Saturday after over a year-long absence from the speedway.

Crews won by two car lengths over pole sitter Jacob Borst of Elon, North Carolina, who qualified with a time of 15.129 seconds and led the race for 30 laps before Crews passed for the lead.

Borst stayed close to Crews’ bumper for the remainder of the race, which was delayed by three cautions.

“We knew it was going to be a little free and we were hoping the track would come to us and it did,” said Crews after the race.

Borst’s car adjusted to the track a little faster and he stayed on Crews’ bumper after Crews passed him for the lead, according to Crews.

“I got a little bump for the lead change and got around him, and we just battled,” said Crews, who found a good line on the outside to gradually pull away late in the race.

“It means a lot coming out here today for the first time in over a year and compete with these guys,” added Crews.

“He’s done a heck of a job in his first year in Late Models,” Crews said of Borst.

“We like to battle each other, and we both had fun today.”

Borst noted that he and Crews have raced against one another several times in the past.

“Track position here is key, and we saved our tires,” added Borst. “It was a really good learning experience, and we were trying to get past Trey but just couldn’t get it done.

“We both rubbed each other giving our all and racing to the limit, but it was clean racing.”

Nathan Crews of Long Island captured the pole with a time of 17.958 seconds and led all 15 laps to win the Pure Stock race at South Boston Speedway on Saturday, with Justin Dawson of Nathalie finishing second, 5.367 seconds behind the race winner.

Bruce Mayo, Johnny Layne and Jared Dawson, all of Halifax rounded out the top-five finishers in a race delayed by one caution and took five minutes to complete.

“We knew it was going to be tough,”said Crews referring to the different track conditions bought on by the Modified machines.

“The track caught us off guard today. We won the pole but were slightly off in qualifying.

“In the race [the car] might have tightened it up a little bit, and there was not much margin for error today.”

The final race of the day saw Josh Dawson of Halifax take the lead from his cousin, Jared Dawson on lap 10 and lead the rest of the way for a win in a race that featured three lead changes among four drivers and took 11 minutes to complete.

Nathan Crews took the pole and led the first lap, with Davis leading one lap and Jared Dawson laps three through ten.

Driving from the rear of the field to win the race and passing his cousin were the hardest parts of the race, according to Josh Dawson.

“The caution helped a lot.”