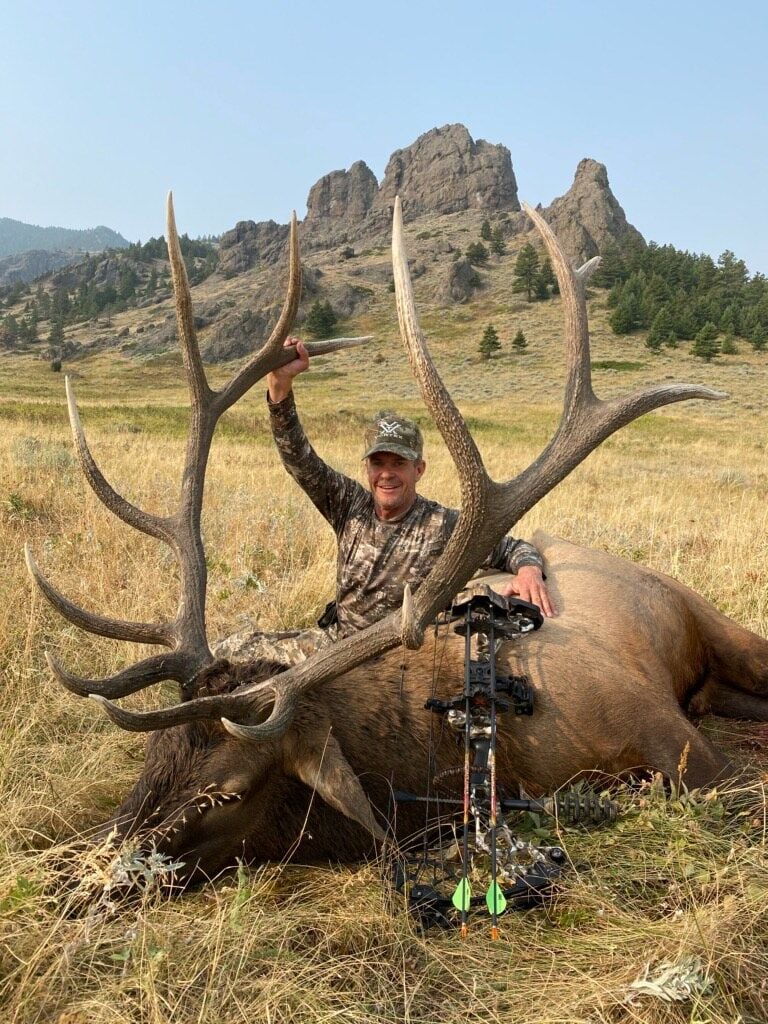 Ward Burton bagged this elk while hunting in Montana in mid September. The approximately 8 ½ year old bull weighed in around 850 pounds and scored a 339. 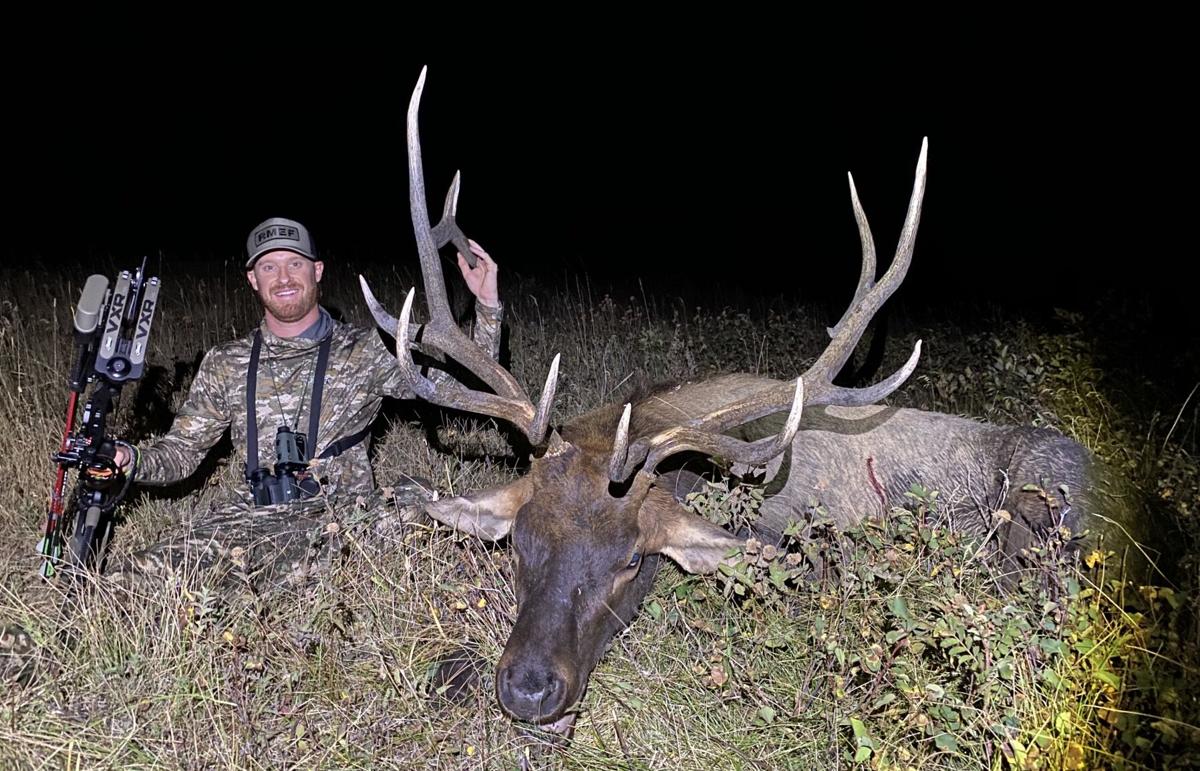 Jeb Burton also bagged a bull while elk hunting in Montana back in September. This was Jeb’s first time bagging a bull. 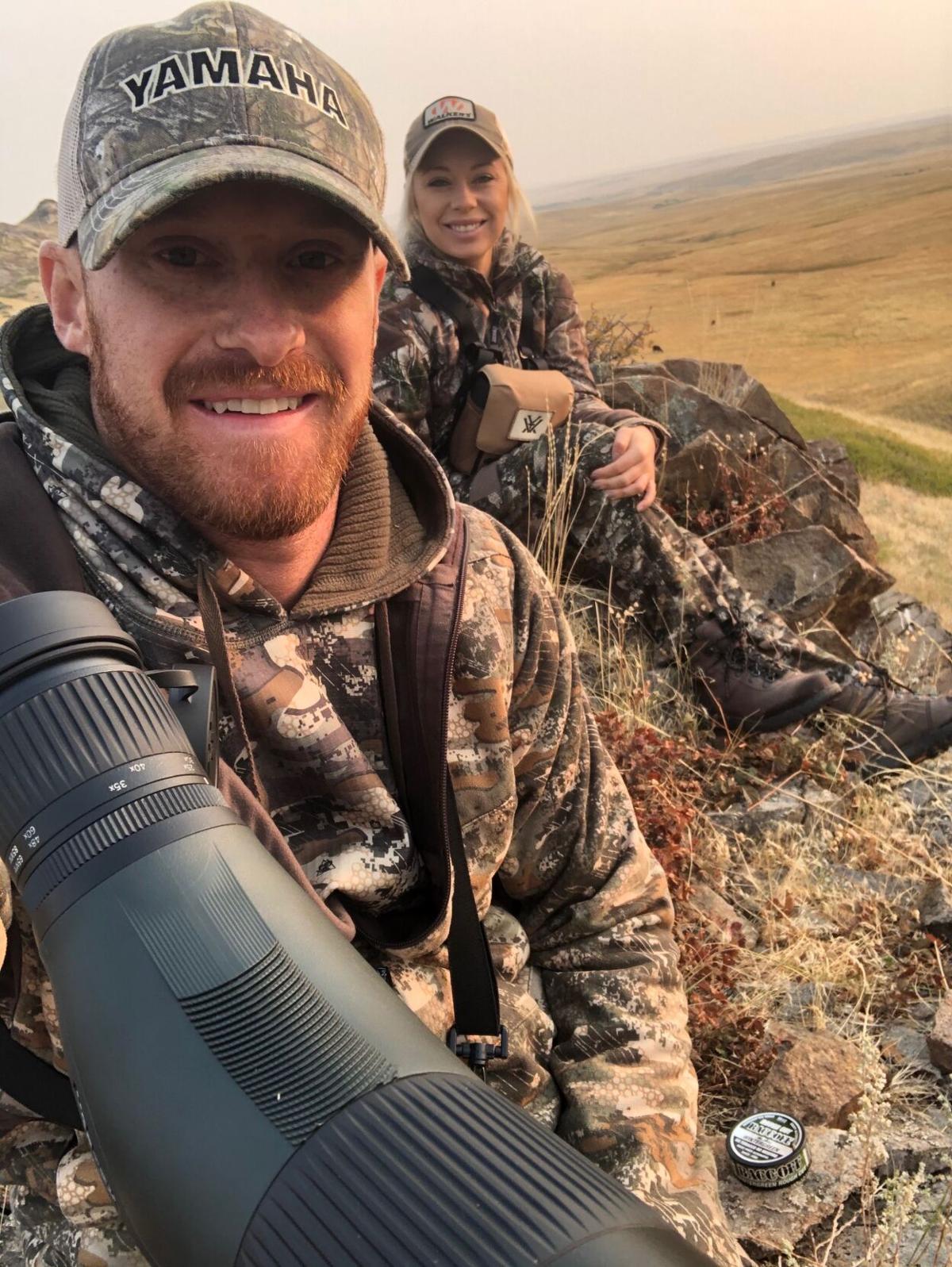 Jeb Burton and his wife Brandi stop to take a picture while elk hunting in Montana.

Ward Burton bagged this elk while hunting in Montana in mid September. The approximately 8 ½ year old bull weighed in around 850 pounds and scored a 339.

Jeb Burton also bagged a bull while elk hunting in Montana back in September. This was Jeb’s first time bagging a bull.

Jeb Burton and his wife Brandi stop to take a picture while elk hunting in Montana.

Halifax residents Ward and Jeb Burton are most well known for their NASCAR careers, but the father son duo also do a whole lot off the track as well.

The Ward Burton Wildlife Foundation has become a full-time job for Ward after NASCAR, and the pair also enjoy getting out and hunting across the country all while Jeb tries to nail down a full-time ride in NASCAR’s next season.

Back in mid-September, Ward and Jeb, along with Jeb’s wife, Brandi, traveled to Montana to go elk hunting with the members of the Rocky Mountain Elk Foundation and Northern Rocky Outfitters.

Ward spent the week in Montana, while Jeb had to cut the trip short because of his racing duties. Jeb flew to Montana after the Richmond race, but had to get back to Bristol later in the week. Luckily for Jeb, he was able to bag his first ever bull on the first day.

They were hunting with bows so they were able to get close to the elk and just being out in the Montana wilderness was worth the trip for them.

Jeb called Montana a “beautiful place,“ and said, “being in the wilderness hunting a wild animal like that is pretty awesome.”

His father added, “Anytime you can go to a different part of the country and see all of the different habitats and different types of animals and climb mountains is a ball for me.”

Ward was able to bag a bull on the final morning of hunting.

This wasn’t his first, but it was by far his biggest elk that he has bagged, estimating to be around eight and a half years old, weighing approximately 850 pounds and scored a 339.

“I just got lucky to get close enough to a nice bull my last morning,” Ward said, who just started bow hunting.

For the Burton’s, hunting is a big part of their life and one that they enjoy doing as much as possible. They have traveled across North America as well as staying right here at home also.

“I have been elk hunting a whole bunch of times but a lot of those times I haven’t bagged anything, in fact the vast majority of times I haven’t. Whether it is Montana, British Columbia, New Mexico places like that I didn’t bag anything but I learned a huge amount about the areas and the wildlife and that is what I enjoy the most,” Ward said.

Jeb added, “I went last year. I hunted in Montana in a different place and got really close to getting one but just didn’t get it done. Being out in the west is a lot of fun. I am thinking about going back out there mule deer hunting. It is something we look forward to doing every year.”

The Sportsman Channel also has a show focused on Jeb and Brandi called Crossroads with the Burtons. The show follows Jeb on and off the racetrack, as well as hunting and conversations at home. The show was filming in Montana while they were on the hunt, and Jeb said that the footage would be airing on the show next year.

In the meantime, Jeb and Ward are getting their bulls’ shoulder mounted and getting the meat from the elk back home in a couple of weeks.

The area of Montana that they hunted was right where Lewis and Clark came through during their expedition of crossing the newly acquired western purchase of the United States in the Louisiana Purchase.

They were right on the Missouri River, according to Ward and the history in the area is rich.

“That is exactly where the buffalo herds were so there is a lot of Native American and European history there,” Ward said. “The next time I go to Montana, I am definitely going to stay an extra week so I can visit Yellowstone and some other national parks.”

Back on the track, Jeb has had a breakout season while only running a limited schedule for JR Motorsports. He has raced in nine races so far this season, with two more races remaining on his schedule this season.

Jeb followed in his fathers footsteps in racing. Ward is the 2002 Daytona 500 winner and winner of five NASCAR Cup Series races in 13 seasons on the circuit.

At the season opening race at Daytona Jeb was racing for the lead before he was wrecked and ended his chances at his first win in the NASCAR Xfinity Series.

“It is a little frustrating with some of the mechanical things that happened this year. I was running fifth at Richmond and we had a loose wheel. At Indy I had a steering box issue so those two took us out of contention. Then getting wrecked at Daytona with a couple laps to go in position to win, so that is a little frustrating, but other than that I feel like we have done a pretty decent job. I am still just building my career back every year, it has been a stepping stone and this year has been one of my better ones in a long time so I feel like we are in a pretty decent spot,” Jeb said.

There were also missed opportunities that Jeb had on top of the mechanical issues or wrecks that he thinks made a lot of difference.

At the Talladega race Jeb was leading as they came to the white flag, but ultimately finished third. In his race at Texas Jeb felt he gave that race away because he spun his tires on the restart, making him fall back from the front and unable to recover. In his runner up finish at Richmond, he felt that was the race that he did everything right, but he just didn’t have the best car to overtake the race winner.

As most drivers on the Xfinity Series circuit run week after week with the same crew and equipment, Jeb is sporadically racing throughout the season.

“It is tough because the other guys are doing it every week so they have a little bit of an advantage on me, it is just the little things like getting in the pit box, communication with your team, communication in the race car, gelling with the team so those things put you at a disadvantage but a fast race car can make up for all of that stuff so we have been getting better and better at bringing better cars to the track this year,” Jeb said.

Finding a full time ride on the NASCAR circuit at any level isn’t easy, and it takes a lot of work by the driver to form relationships and constantly work at securing that full time ride.

“It is definitely tough but we are working hard so maybe we can go full time next year,” he said. “I am working every day to try and find partners so I can be full time, I would love to be full time at JR motorsports it has just been really tough to find the funding that it takes,” he added.

“At this point I am not exactly sure what I am going to be doing next year I think at worst I will be doing what I am doing this year which is not a bad deal at JR motorsports, just a part time schedule can be tough so we are doing everything we can so possibly we can be full time but right now I am not sure what the future brings.”

Jeb and Ward both mentioned that Jeb has “some exciting things” that he is working on. Having the strong runs he has had throughout this season has definitely helped his chances, but time will tell if things will work out.

“We just need to get Jeb into racing full time. We have one really big opportunity we are working on right now so hopefully that is going to pan out,” Ward said.

Winning is what Jeb is looking to do every time he gets into the racecar so he is constantly looking for ways to get into the best equipment to have those chances to win.

“I don’t want to just go ride around. I want to go win races, and I know I can do it, I just have to be in the right situation to be doing it more,” he said.

The Ward Burton Wildlife Foundation (WBWF) also has been staying busy with projects in Halifax and surrounding areas. The Army Compatible Use Buffer (ACUB) has over 20,000 acres at Fort Pickett and 11,000 acres in Pennsylvania preserved to prevent encroachment on the military bases.

“That is a big responsibility so that keeps us on our toes,” Ward said.

The WBWF owns around 9,100 acres in Halifax, Brunswick, Lunenburg and Dinwiddie counties. That land is managed exclusively for wildlife, agriculture and sustainable forestry practices.

The foundation’s next generation outreach that they have been doing in the schools has had to take a step back due to COVID-19, but Mike Roberts, outreach coordinator for the foundation, still has some programs scheduled.

The veterans outreach program are still able to have hunts on foundation land and they recently had men, women and families hunting the land on youth day that are active or retired service men and women.

“We cannot do full fledged events like we used to because of the virus, but we are building the infrastructure from drawing renderings and layouts on a permanent facility on land that we own near Fort Pickett. That is going to turn into where we do our veterans, youth and landowner outreach, and that will be completed sometime early next summer,” Ward said.

Just last week the foundation held the Virginia Cooperative Extension fall forest and wildlife field day on the foundation property. Over 30 landowners participated, and they were able to show them different land management practices.